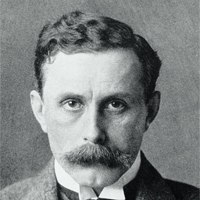 Adolf Loos (December 10, 1870, Brno, Moravia - August 23, 1933, Kalsburg, Austria). His father, a craftsman, had a workshop where Adolf obtained his first lessons that were essential during the course of his career.  After several failures trying to enter the school of architecture, he finally started studying at the Professional School of Reichenberg (Austria), and between 1890 and 1893 at the Dresden Polytechnic without obtaining the title of architect at the end. In 1893 he traveled to the United States to see the Universal Exhibition of Chicago, where he completed his training during his stay as he was in contact with the Anglo-Saxon culture which influenced his aesthetic criteria. After visiting Londo and Paris, in 1896 he settled in Vienna working as an architect.

He worked as a furniture designer at the company F.O.Schmidt with his first order the Kohlmarkt Hall in 1897. In 1899 he revolutionized viennese architecture with the construction of the Café Museum and in 1908 wrote his famous article Ornament and crime, where he expounded his idea of ​​dispensing the ornament. He founded his own construction school in 1912, which had to close because of World War I, and in 1920 he was appointed chief architect of the Viennese City Council, resigning in 1924 because of his social principles, moving to Paris for the next five years.

He was a pioneer within the modern movement because he supported the no use of ornamentation and the break with historicism, being a precursor of the architectural rationalism. From his postulates, where he oppose art and utility and saw the architecture only from the utility field, he positioned against the modernists. These had formed the Viennese Secession and held an antagonistic view of architecture. He came into contact with the European artistic avant-gardes of the moment, such as Schönberg or Kokoschka.

The architecture of Adolf Loos is characterized by being functional and take into account the qualities of new materials. For him, architecture is different from the other applied arts, it is the mother of all; having to be functional and dispose of ornamentation.

One of his greatest concerns was to provide humans with a modern life, a western culture with no differences. In his magazine Das Andere, founded in 1903, he reflected all these problems, introducing the concept of Raumplan, where Loos awarded each space a different importance. According to the importance of the room and its vision within the total volume of the building, it had a different size and height. Thus he discovers the concrete space where human life unfolds.

Among his outstanding works we find the intervention at the Coffee Museum (Vienna, 1899), the Villa Karma (Switzerland, 1903-1906), the Steiner houses (Vienna, 1910), the Goldman Tailors and Salatsch, also known as Loos House, (Vienna, 1910) and the project Chicago Tribune Column (1922). Amongst his last works, some of them built in France, are the Tristan Tzara House (Paris, 1926), the Moller House (Vienna, 1928) and the Müller House (Prague, 1930), becoming an important influential teacher in the architectures of Gropius, Le Corbusier and other postwar architects.