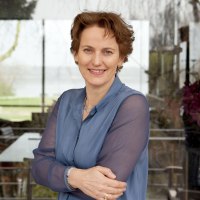 Francine has remained true to her architectural vision, Composition, Contrast, Complexity throughout her career. Always looking for inspiration and the secret of a specific location, Francine bases her work on both analyses and intuition. She enjoys interweaving social, technical, playful and humane aspects together in order to form a unique solution to each situation. Francine Houben combines the disciplines of architecture, urban planning and landscape architecture in an untraditional way; with sensitivity for light and beauty.

Her use of material is expressive. She is known as one of the most prolific architects in Europe today. Her wide-ranging portfolio comprises an intimate chapel built on the foundations of a former 19th century chapel in Rotterdam (2001) to Europe’s largest library in Birmingham (2013). Francine Houben’s work reveals a sensory aspect determined by form and space, a lavish use or subtle combinations of the most diverse materials, as well as planes of saturated colour. Francine’s contribution to the profession of architecture is widely recognized. She was granted lifelong membership to the Akademie der Künste, Berlin in 2010.

In 2008, she received the Veuve Clicquot Business Woman of the Year Award. Honorary fellowships to the American Institute of Architects and the Royal Architectural Institute of Canada, and an international fellowship to the Royal Institute of British Architects were granted to her in previous years. The past three decades have seen her cumulative effect on the profession of architecture. Francine lectures all over the world and takes part as a jury member in prestigious competitions.

Her commitment to research and education is evidenced in her instatement as professor in Architecture, Chair of Aesthetics of Mobility at the Delft University of Technology (2000), her professorship at the Universitá della Svizzera Italiania, Accademia di architettura, Switzerland (2000) and her appointment as visiting professor at Harvard (2007). Dedication to her alma mater is reflected in generous sponsorship of the UfD-Mecanoo Award for the best graduating student of the Delft University of Technology.

Francine Houben lives in Rotterdam, a modern city where the skyline is dotted with buildings designed by world renowned architects; including her award winning Montevideo Skyscraper (2005). It was in this dynamic city that she directed and curated the First International Architecture Biennale Rotterdam (2003), with the theme, ‘Mobility, a room with a view’. She has realised numerous signature projects throughout the Netherlands and Europe including Philips Business Innovation Centre, FiftyTwoDegrees in Nijmegen, (2005-2006), La Llotja Theatre and Conference Centre in Lleida, Spain (2009) and the Delft University of Technology Library (1999). Currently, she is expanding her architectural vision to other continents with the design of Taiwan’s largest theatre complex, The Wei-Wu-Ying Center for the Arts in Kaohsiung (2014), Dudley Municipal Center in Boston (USA) and Shenzhen Cultural Center (China). In 2011 the book Dutch Mountains was released, a chronicle of Francine Houben and eight special projects in five different countries.

Francine maintains an active presence in academia and culture, regularly publishing and giving lectures worldwide. She has performed in many academic and professional capacities throughout her career, including Chair of Architecture and Aesthetics of Mobility at Delft University of Technology, visiting professor at Harvard Graduate School of Design, and as director of the First International Architecture Biennale in Rotterdam.

Francine has received honorary fellowships from the Royal Institute of British Architects, the American Institute of Architects and the Royal Architectural Institute of Canada. In 2014 Francine was named Woman Architect of the Year by the Architects’ Journal and in November 2015 Queen Máxima of The Netherlands presented Francine with the Prins Bernhard Cultuurfonds Prize for her wide-ranging career. Francine was awarded Honorary Doctorates from the Université de Mons, Belgium (2017) and the Utrecht University (2016).

“Architecture must appeal to all the senses. Architecture is never a purely intellectual, conceptual, or visual game alone. Architecture is about combining all the individual elements into a single concept. What counts in the end is the arrangement of form and emotion.”