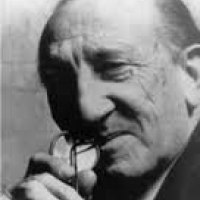 Francisco Javier Sáenz de Oíza. (Cáseda, 12 October 1918 - Madrid, 18 July 2000) was a Spanish architect and influential practitioner of the modernist movement in Spain. He studied architecture in Madrid. After a study trip to the United States, in 1949 he returned to Madrid where he started teaching at the School of Architecture, later becoming its director. Among the numerous awards he received in Spain are the National Architecture Award (1954), Gold Medal for Architecture (1989) and the Prince of Asturias Award (1993). Sáenz is considered to be one of the most influential Spanish architects during the second half of the 20th century. He died of cancer in 2000.

One of his most notable projects was the Torres Blancas high-rise apartment and office building in Madrid. With a height of 71 metres, it was built between 1964 and 1969. The façade consists of cylindrical volumes crowned by round overhanging balconies. Other notable projects include the Arantzazu Basilica in Oñati, the Torre Triana administrative building in Seville, the Spanish embassy in Brussels, the Public University of Navarra in Pamplona, the remodelling of an old palace in Las Palmas, Gran Canaria, into the Atlantic Centre of Modern Art, and the Banco de Bilbao Tower in Madrid.