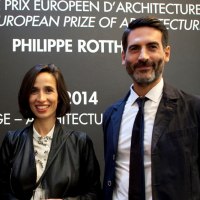 Sol89. María González - Juanjo López de la Cruz. María (Huelva, 1975) and Juanjo (Sevilla, 1974) graduated from the Escuela Técnica Superior de Arquitectura de Sevilla in 2000,  tenth and third in their class of a total of 348 and awarded the highest grade in their Final Degree Projects, receiving both prizes in the 13th edition of the Dragados Final Project awards. After a one-year scholarship at L´École d´Architecture de Paris-la Seine in France, they worked for the Spanish architects Javier Terrados and Guillermo Vázquez Consuegra.

Following this experience they established their own office Sol89 in 2001, a practice in which they strive to accommodate research, teaching and professional practice. Over the years, SOL89 has had the chance to carry out and build projects throughout intermediate spaces of the city as well as reusing obsolete structures. This work has been widely published in national and international magazines and journals and has received several awards, most recently: First prizes in the Architecture Awards of the Architectural Institute of Seville and Huelva (2006, 2015 and 2016), Silver Medal of the Fassa Bortolo Prize (Italy, 2013), the Wienerberger 1st Prize (Austria, 2014), Silver Medal of the Fritz-Höger Preis (Germany, 2014), the Grand Prix Philippe Rotthier of European Architecture (Belgium, 2014), 1st prize in the X Enor Young Architecture Award (Spain, 2014) and the 40under40 prize 2014 of the Chicago Athenaeum for Young european architects (USA, 2014). They are finalists of the Spanish Biennale of Architecture 2014,  they have been nominated for the European Union Prize for Contemporary Architecture-Mies van der Rohe Award 2015 and chosen for representing Spain in the XV Biennale di Venzia 2016, winner of the Golden Lion.

They are Associate Professors at the Department of Design of the Architecture School in Seville since 2005 and Master degrees in Architecture and sustainable cities, University of Seville 2008. Their professional and academic career also spans the field of architectural thought; They have published articles and spoken at conferences, as well as directed seminars and meetings, such as the International Congress dedicated to the work of Jørn Utzon for the Universidad Internacional de Andalucía (2009) and the annual seminars Acciones Comunes (2013, 2016 and 2017) for the Universidad Internacional Menéndez Pelayo about artistic and architectural strategies. They are the coauthors of the books Cuaderno Rojo (University of Seville, 2010) and Acciones Comunes (Universidad Menéndez Pelayo, 2014), and authors of Proyectos Encontrados (Recolectores Urbanos, 2012) as well as El dibujo del mundo (Lampreave, 2014). In this order, these books are reflections about research in architectural design, the debris of contemporary architectural culture and the idea of journey and drawing in the work of the Norwegian architect Sverre Fehn.