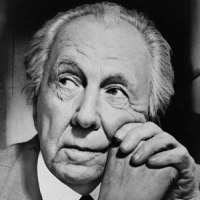 Frank Lloyd Wright was born in Richland Center, Wisconsin in 1869 and died in Phoenix, Arizona in 1959. He is considered as one of the Modern Movement’s father in architecture and one of the most important architects of the XX Century, together with Le Corbusier, Ludwig Mies van der Rohe and Walter Gropius. Wright was placed in Chicago, San Francisco, Spring Green (Wisconsin) and Phoenix (Arizona). His life as an active architect in USA was from 1889 to 1962 and in Japan between 1915 and 1923.

Wright was born in a protestant family. His father was preacher of the unitary church, of which he inherited a romantic view, in continuous searching of the universality and the non-conformism. In 1885 he began to study civil engineering in Wisconsin University and worked as draughtsman for an engineer-constructor. Two years later, in 1887 he placed in Chicago where he worked for Joseph Lyman Silsbee, an architect of picturesque nature. Shorty afterward he became a member of Louis Sullivan’s and Dankmar Adler’s studio, and he was the responsible of it in 1889. In this year he started the construction of his first house, for himself in the Oak Park of Chicago (1889-1890).

With Sullivan he made the Charley’s House in Chicago (1891-1892). But at the same time and independently of his work at Sullivan’s studio, he took part of the construction of the Wainwright Building (1890-1891) and the Schiller Building (1891-1892). In 1893 he broke up with Sullivan and he established on his own account, working as domestic architecture.

In 1901 he began his first great creative phase, the “Prairie Houses” period. In this phase, he made the space a real discipline. His most outstanding works were the Susan Lawrence Dana’s house in Sprinfield ¡1902-1904), Avery Coonley’s house in Riverside (1906-1908) and Frederick C. Robie’s house in Chicago (1906) and the unitary temple of Oak Park (1905-1908). He also built the Larkin Company Administration Building in Buffalo, New York (1902-1906) where he tacked the theme of the work space.

Wirght published in the Architectural Record magazine in 1908, the called 6 organic architecture principles; although he said he had written them in 1894. The principles are: simplicity and elimination of the superfluous; to each client, his life style and his house style; correlation among the nature, topography and architecture; adaptation and integration of the building in his environment and the harmony of the used materials (conventionalization); material expression; and at least, the analogy between the human qualities and the architecture.

In 1909 he decided to travel to Europe and he prepared two synoptic publications with the editor Wasmuth in Berlin. In this phase, Wright has already more than 130 works built. He came back to the United States in 1910. In 1922 he placed in the family lands in Spring Green. Here he planned the called Taliesin House, which would be his house, architecture studio, art gallery and farm. He would extend and modify it during the next years because of two fires in 1914 and in 1925.

Since 1913 he changed his ornamental language due to the European influence and his architecture became more geometric as a consequence, inclusively cubist. This change can be appreciated in the Midway Garden in Chicago (1913-1914) or in the Imperial Hotel of Tokio (1913-1923).

He planned after the Mrs. George Madison Millard’s house “The Miniature” in Pasadena (1923), the John Storer’s house in Hollywood (1923-1924) and the Samuel Freeman’s and Charles Ennis’s houses in Los Ángeles (1923-1924); houses built with reinforced rubblework and walls made of moulding concrete ashlars. But Wright moved to the Arizona desert in 1927, where he found other nature conditions to adapt to. Here he projected a hotel complex in San Marcos, near Chandler, Arizona (1928-1929), which is a growth model that Wright compared with the landscape.

In the 30s, the financial scandals and the consequences of the great depression prevented him to carry out many of his designs and he only projected the Kaufmann Family’s Vacation House: “Fallingwater”, in Bear Run, Pennsylvania; where Wright achieved to unify the nature, the technology and the social organization. In this phase, Wright used the term “Usonians” that referred to the union of the terms USA, utopia and “organic social order”. One example of that is the Herbert Jacops’s House in Madison, Wisconsin (1936-1937). Simultaneously, he built the de Johnson & Company’s headquarters in Racine Wisconsin (1936-1939) and his adjoining tower, where are the investigation laboratories (1943-1950). In 1943, his most important project came: the Art Museum “non objective”, put in charge by Solomon Guggenheim in the 5th Avenue in New York, finished in 1959.

In the 50s, Wright exaggerated increasingly the formal aspect of his buildings. His last projects were: the unitary church of Madison (1945-1951), the synagogue of Beth Sholom in Alkins Park, Pennsylvania (1953-1959), the Annunciation Church in Wautatosa, Wisconsin (1955-1961) and the Martin County’s civic centre in San Rafael, California (1957-1962).