After decades of social upheaval, Cali city, Colombia is refocusing its attention on urban design and revitalization. Two weeks ago the Ministry of Infrastructure and Enhancement of Cali activated the construction of the first phase of the Cali River Linear Park out to tender, which is scheduled to be inaugurated in September 2015. Designed by West 8 together with the Municipality of Cali, Río Cali Park will eventually extend along the riverbanks from the city until the river mouth in the Cauca. Enabling people to again, see the river as an important and vital element of the city. 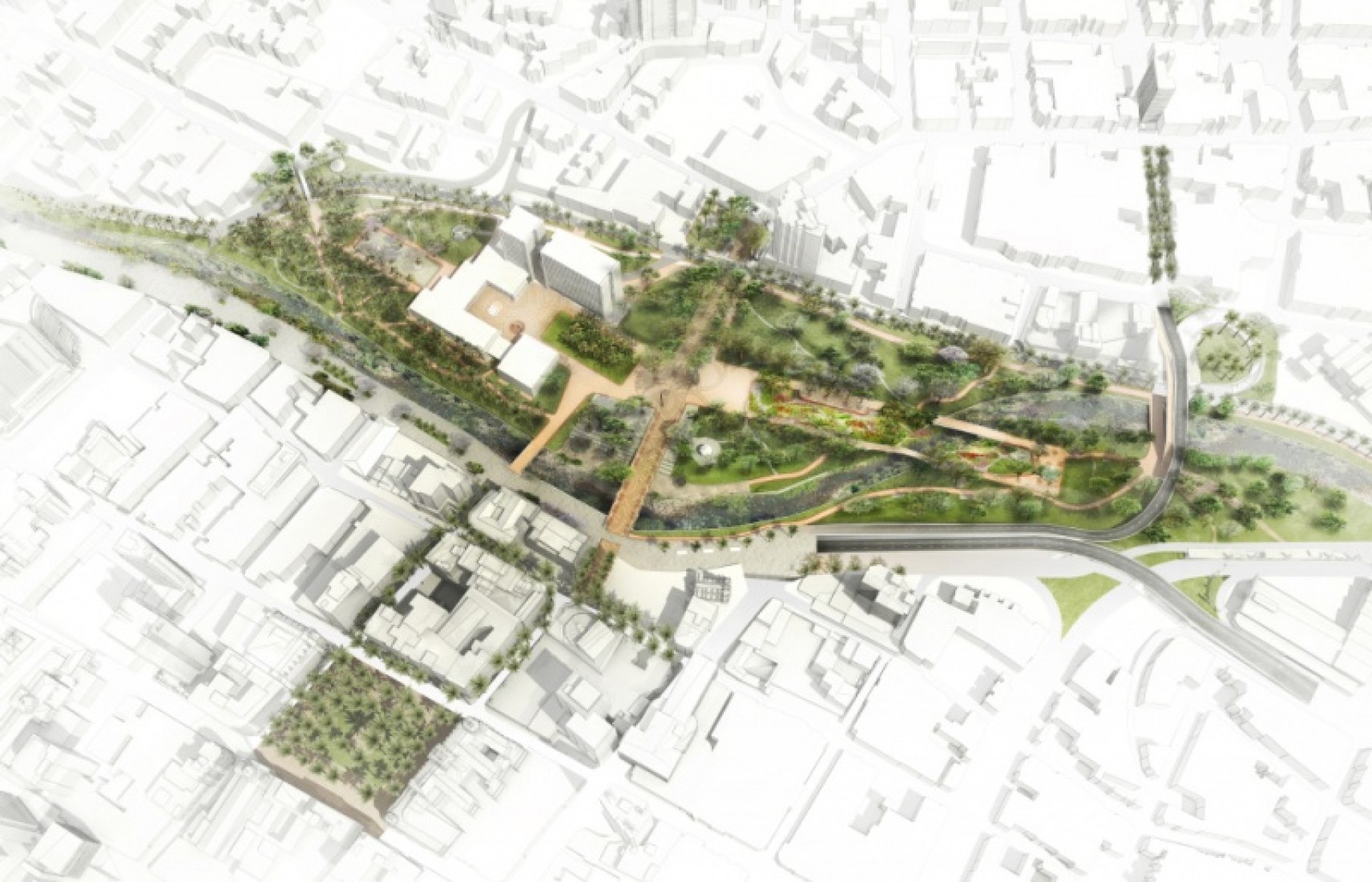 Paseo Linear - new pedestrian and bike pathways improve accessibility within the park and on a citywide scale. Click above to see larger image. 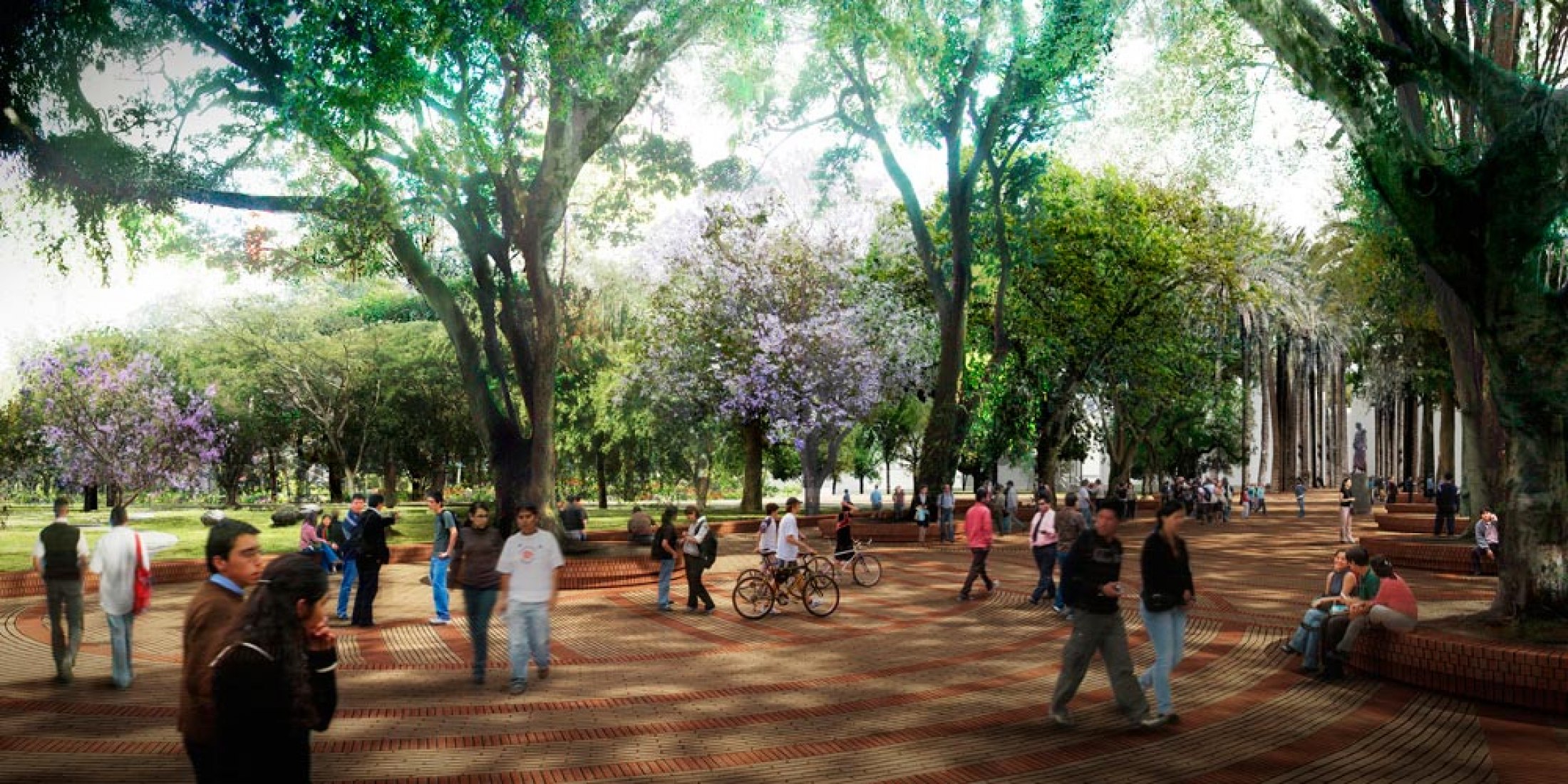 Paseo Linear - new pedestrian and bike pathways improve accessibility within the park and on a citywide scale. Click above to see larger image.

Linear Park Bridge - the new bridge spans the natural cascades which are intended to improve the river ecology. Click above to see larger image. 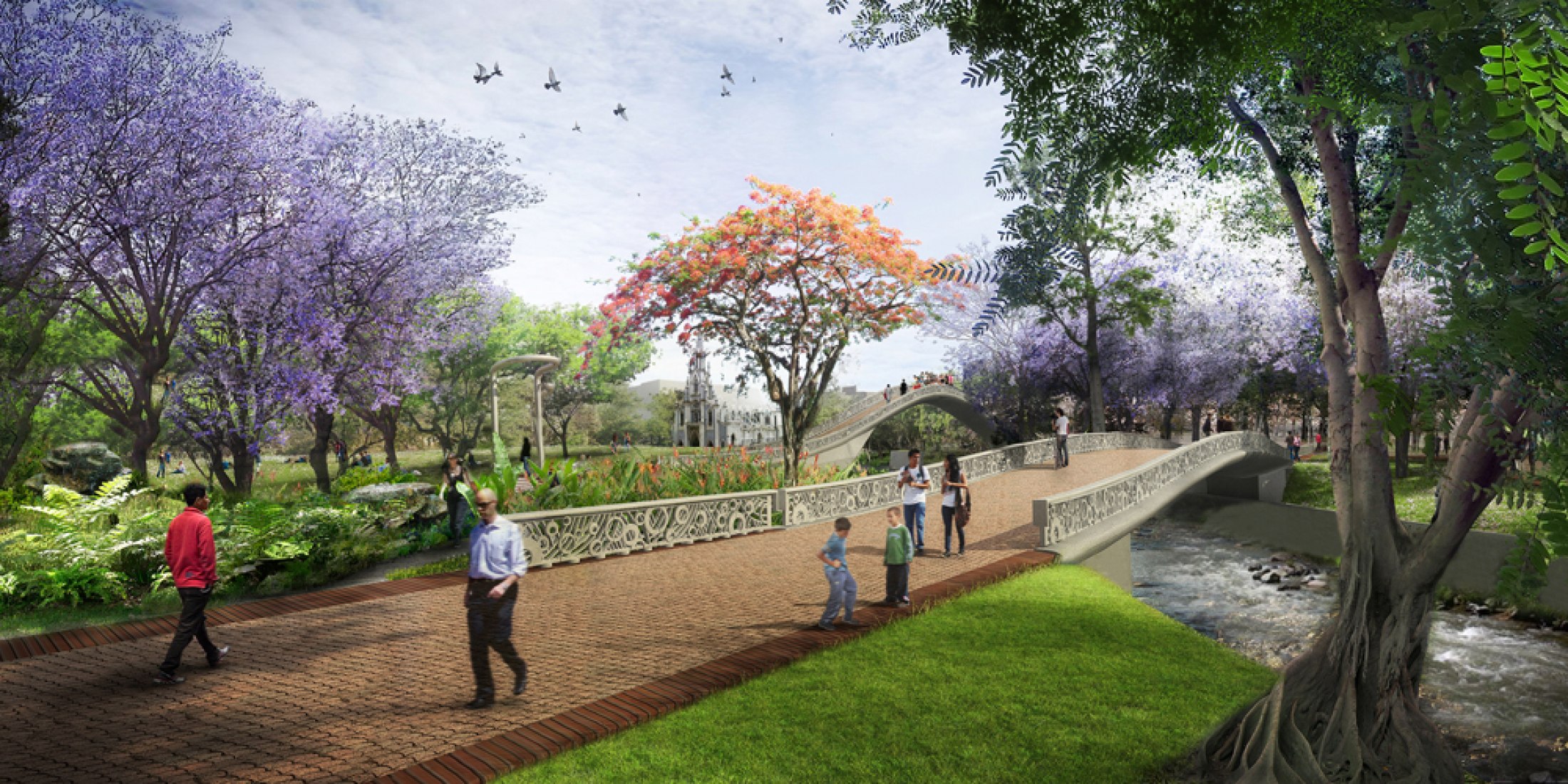 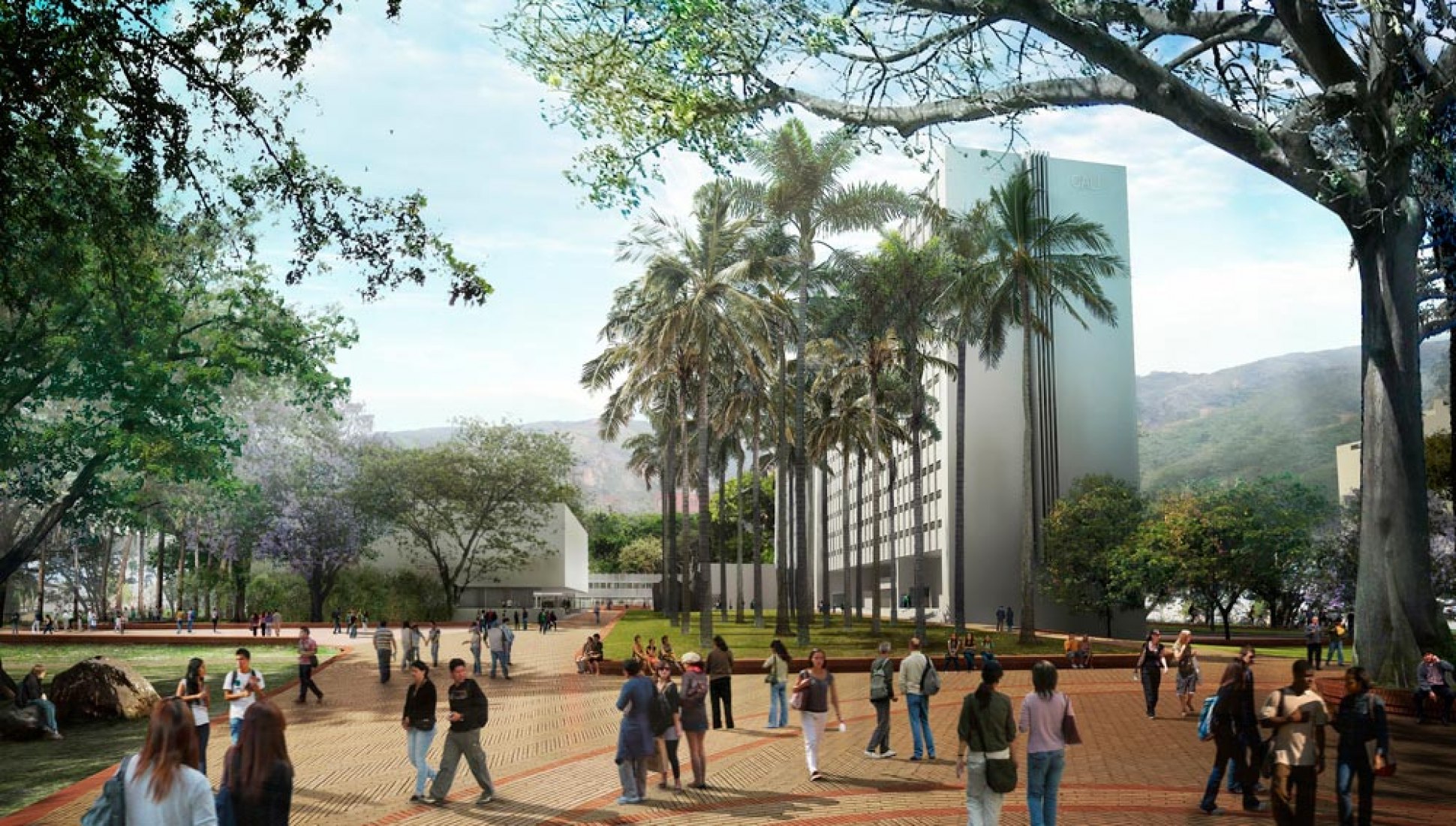 Plazoleta del CAM - New civic square within the park provides a forum for the municipal buildings. Click above to see larger image.

The Río Cali Park, is a result of a strategic alliance between the public and private sectors. West 8, together with the Municipality of Cali, has worked intensively on the design of the park which is intended to create a safe and well connected public realm and catalyze the renewal of the urban center. In recent years the newly stabilized authority of Cali has been investing in urban improvements to modernize its public realm and transport systems. Undertaking efforts to reestablish urban public life via the revitalization of the city's natural heritage, the Cali River and its role in Cali's collective urban life, Cali, ¿Un sueño atravesado por un río? 'A 'Dream Crossed by a River' is one such initiative.

Description of the project by West 8

Encouraging Sustainable Urban Development; Reconstructing Urban Life
With one of the fastest growing economies in Colombia, Cali is focused on creating a new epicenter of commerce and a peaceful public realm for collective urban life. A sentiment that has led to the instigation of the Río Cali Park Project. The project has been commissioned by a group of Cali entrepreneurs who recognized the need for a quality public space within the city center that brings people from all walks of life together."The idea was to create a large park of international stature, that takes advantage of the river, green areas, the diversity of fauna and existing tree planting" explained Project Manager, Claudia Palacios Richardson.

In this car dominated society, West 8 and the Municipality of Cali's new urban design prioritizes pedestrians and cyclists. It facilitates important access to new public transport terminals and provides safe and pleasant passageways for cyclists and pedestrians through the rapidly expanding city. In addition to providing a new infrastructural network for the many people who use the bicycle as their predominant mode of transport, this project aims to endow the city with a peaceful public environment, providing places where people of Cali can meet and enjoy on a daily basis. With a more stabilised environment people's lives begin to be reoriented around the streets again, collective urban life can be reclaimed, and expectantly this will trigger Cali's urban identity to gradually be reborn in a more constructive manner.

Environmental Issues Treated as an Opportunity
Suffering from problems of deforestation in the upper river catchment, widespread pollution and safety issues, West 8’s design will reconnect Río Cali Park with the river landscape where the natural assets and the environmental legacy of the Cauca Valley are the treasured. Transforming it from an underutilized and overgrown urban green space into a rehabilitated ecological landscape and respected city destination. By dealing with the environmental issues, the city also gives way to a major urban transformation that people have longed for after decades of tormented Columbian city life.

Some weeks ago the Ministry of Infrastructure and Enhancement of Cali put the construction of the first phase of the Cali River Linear Park out to tender, which is scheduled to be inaugurated in September of 2015. With construction commencing in January 2015, the first section of the riverside park which stretches between 15th and 25th Street, will remove two lanes of adjacent vehicular traffic and replace them with a pedestrian and bicycle pathway. The new cycleways will eventually connect the city from east to west bringing people from the surrounding neighborhoods into the city center. Meandering along the river the "Paseo del Rio" will give pedestrians and cyclists space to safely navigate away from vehicular traffic.

Construction of the second phase of the project is expected to start in February and will be completed in late November 2015. Phase 2 begins at 8th Street, opposite the River Boulevard and encompasses the Monument to Journalists, the Paseo Bolivar, the new Jorge Isaacs Garden and the CAM Square, which will be transformed with lush greenery and feature a piano-bar style café.

The launch of phase one of Río Cali Park, is the first step of this substantial urban renewal and river rehabilitation project and speaks volumes for the city’s urban transformation. This publicly supported project will eventually extend along the riverbanks from the city until the river mouth in the Cauca. Addressing future mobility needs and enabling people to again see the river as an important and vital element of the city. 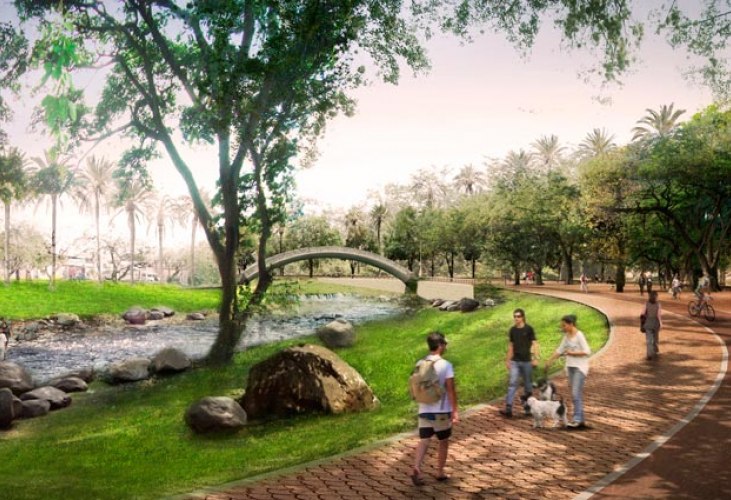 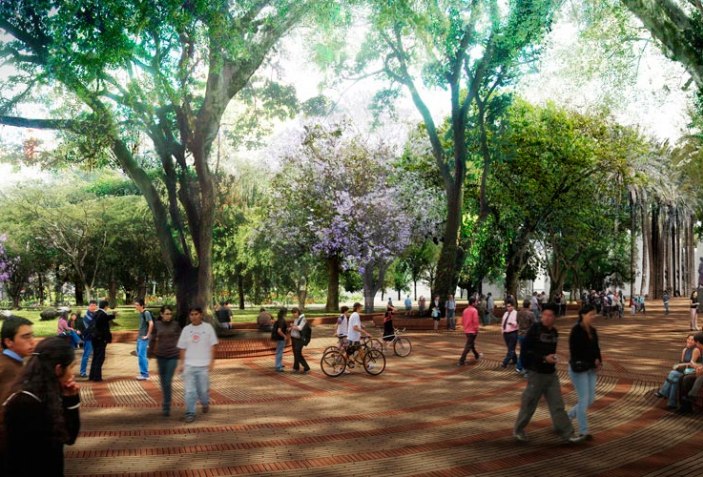 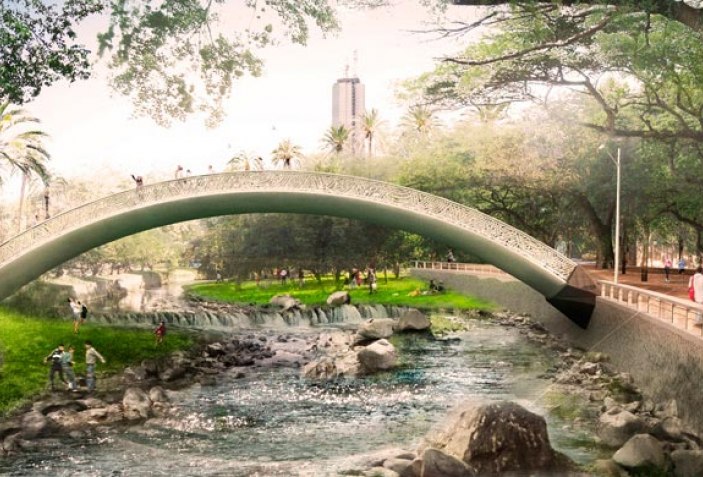 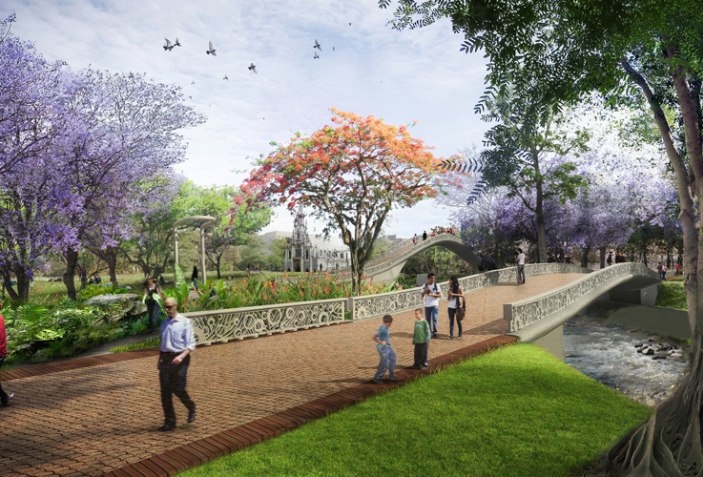 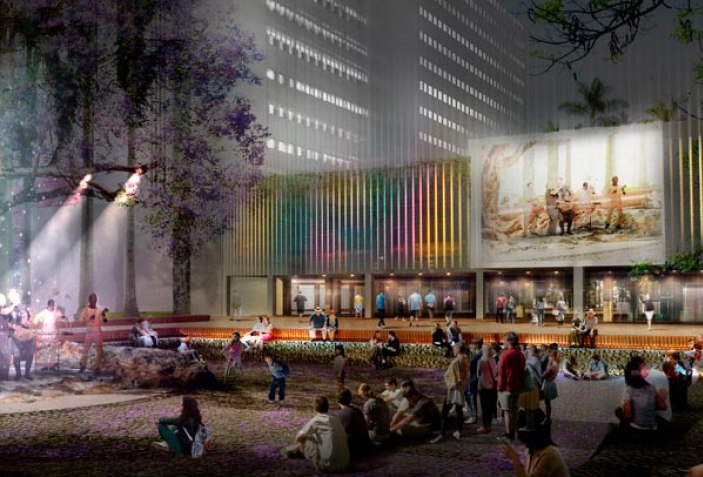 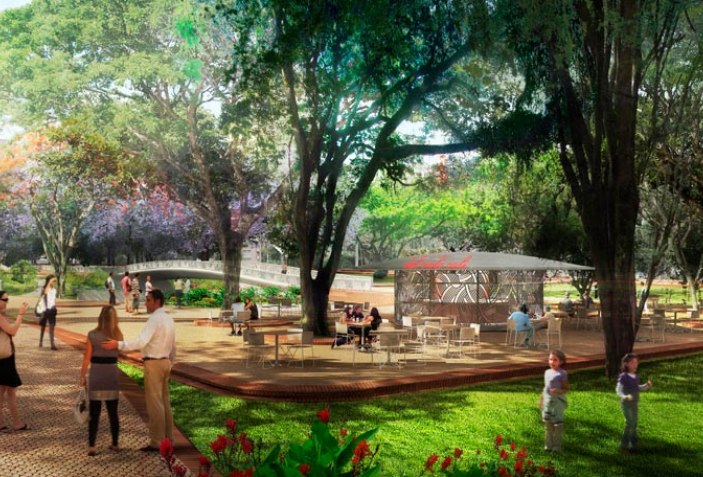 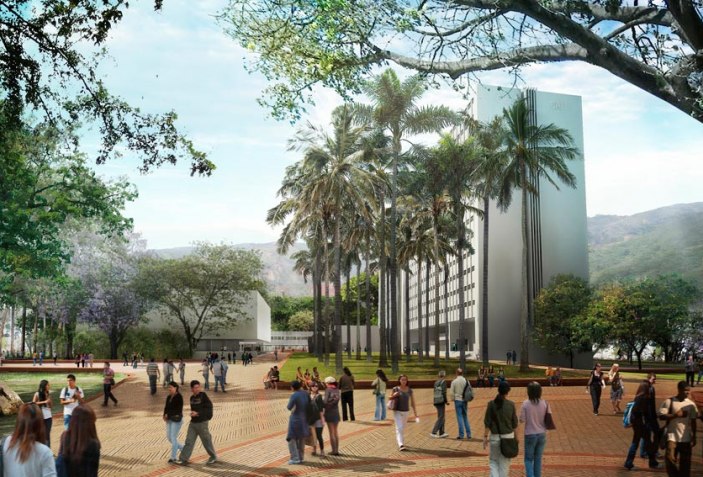 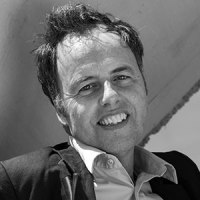 West 8 is an award-winning international office for urban design and landscape architecture founded in 1987. Over the last 31 years West 8 has established itself as a leading practice with an international team of 70 architects, urban designers, landscape architects and industrial engineers. West 8 developed projects all over the world in places such as Copenhagen, London, Moscow, New York, Madrid, Toronto and Amsterdam.

The office gained international recognition with projects such as Schouwburgplein in Rotterdam (NL), Borneo-Sporenburg in Amsterdam (NL), Jubilee Gardens in London (UK), Expo \'02 in Yverdon-les-Bains (CH) and Miami Beach SoundScape Park (US). Many of the projects are the result of groundbreaking entries in important international competitions. Recently won competitions include Toronto Waterfront in Toronto (CA), Governors Island in New York (USA) and Yongsan Park in Seoul (KR).

Adriaan Geuze is one of the founders of West 8 urban design & landscape architecture b.v., a leading urban design practice in Europe. Geuze attended the Agricultural University of Wageningen where he received a Masters degree in Landscape Architecture. After winning the prestigious Prix-de-Rome award in 1990, Geuze, with his office West 8 founded in 1987, established an enormous reputation on an international level with his unique approach to planning and design of the public environment. By founding the SLA Foundation (Surrealistic Landscape Architecture) in 1992, Geuze increased public awareness of his profession. 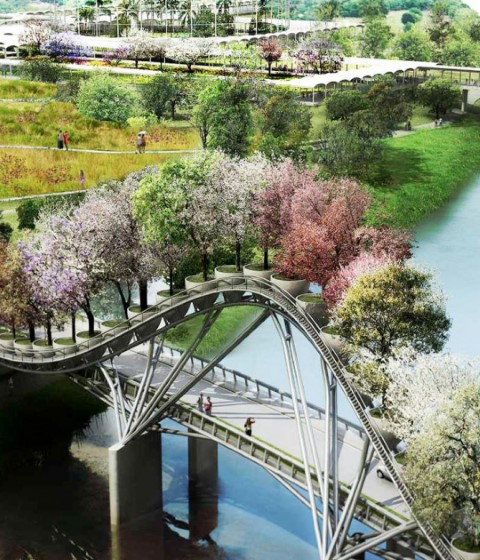 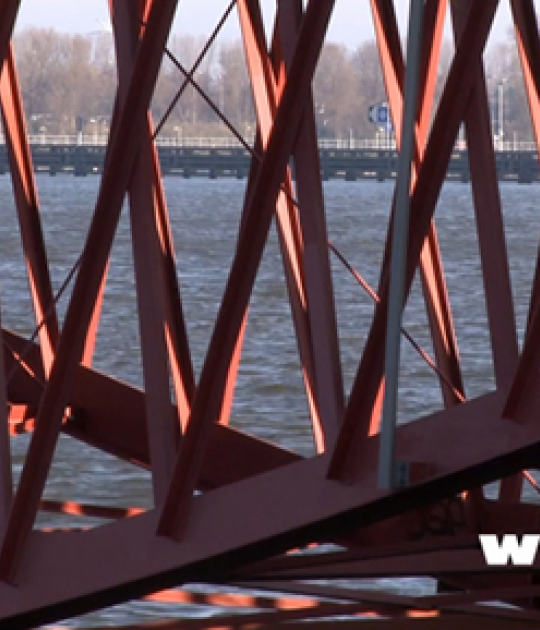 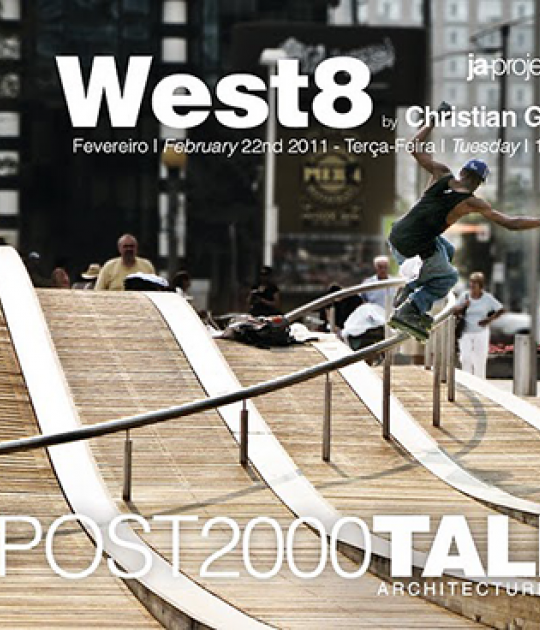