The competition seeks to apply a biological mechanical approach to the future environments of the city of London, applying the values of bioreef diversity. The city is limited in growth and marooned through the implementation of the green belt. The areas for expansion are either through the current high density processes, which begin to populate flood plains, or to move eastwards denseifying east London breaking through the green belt towards the Thames estuary, where a new second generation London could rise from the waves.

The risk of flooding and density problems points to need for radical thinking, bringing the exciting prospect of populating the estuary and Thames with a new generation of floating eco villages, Thames bridge communities, and farms could emerge from the waves, integrating the interesting interwoven layers and networks of the canals and rivers that London has populated and built. London’s birth depended on water, London’s present is a balance of city and water together, London’s futuristic city will undoubtedly be a water based city formed by the rise of sea levels.

The futuristic water competition seeks to harmonize the two through the explored application of the bio reef mechanical diversity architecture theory to its future environments. The use of new materials, technologies, (green tidal, wind, sea, bio fuel and solar energy ideals). Aesthetics, and novel spatial organizations, along with studies on globalization,population increase, flexibility, adaptability, and the digital revolution are some of the multi-layered elements that the participants should take into consideration.

City designs originally designed for other world cities but provide extremely commendable qualities which may be useful for London, will also be considered for the bioreef diversity publication if clearly demonstrated how the concept can be adapted - world examples section.

There are no restrictions in regards to site, program or size. The objective is to provide maximum freedom to the participants to engage the project without very specific constraints in the most creative way.

Proposals could tackle housing issues in London, tackle and propose a financial and research technology hub, which brings thousands of jobs, with 21st century homes, urban farm integrations, public green spaces that has rich urban vibrancy and street life , the question is how does London grow and prosper in the 21st century as a fluid diverse world city, but with sustainability at its core.

First Place: £10,000 Second Place: £5,000 15-20 honorable mention projects will also be featured in the bio-diversity book along with unique connected websites to the foundation with personal forums. This gives everyone a serious platform for self publication but to engage in debate and discussions. All submissions will receive an archive page (mini website) on the foundation website with full project description and personal forum and entry into the network paradigm. Special Student Award is expected to be announced soon.

The Futuristic Water competition is open to all students, architects, artists, individuals, and organizations, including central and local governments, community-based groups, NGOs, research organizations and the private sector from any country in the world. Biological Architecture strongly encourages the formation of interdisciplinary competition teams. Biological Architecture invites you to consult with or research professions not usually included in design competitions. Consider including biologist students, climatologists; public health experts, educators and urban activists along with designers, engineers and urban planners. There is no limit on the number of entries a given organization may submit, but all entrants must pay the full entry fee and each entry must meet every contest requirement to be considered.

Your submission should consist of the following: Two 24" by 36" colour boards (landscape orientation) presented as digital files in PDF format at 300 dpi. Total combined files size is 20 MB. + word document can be uploaded separately. These boards are the visual summary of the transformation each team envisions for London city. A word document of between 1000 - 3000 words describing the project. Files should be named by your unique entry code number and submitted on the website registration page or sent to: biologicalarchitecturefoundation [at] live.co.uk (please replace [at] with @). Please note that you get your unique entry code number, after completing the first step of the online registration.

An early submission fee of €65 per entry by 1 March 2011 is required from all participates or team representatives. A higher fee will be charged thereafter, teams are encouraged and can split the fee. However only one project per fee can be submitted. 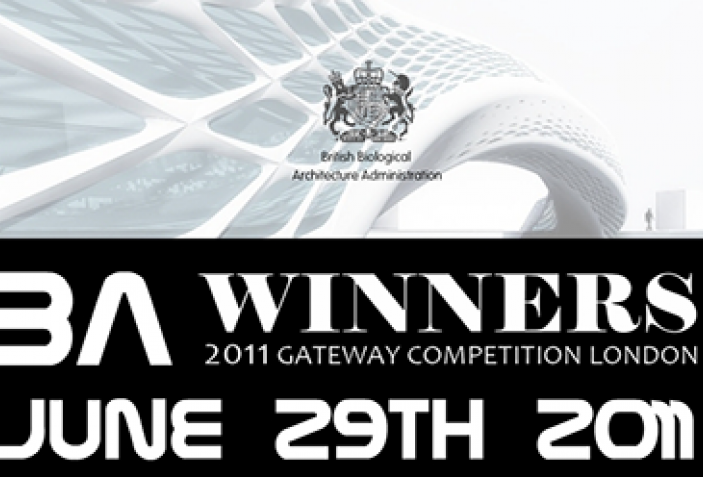