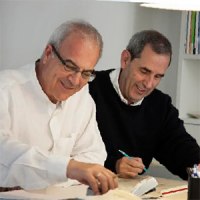 Architects Antonio Cruz and Antonio Ortiz started their professional careers in 1971, after graduating from Escuela Superior de Arquitectura in Madrid. In addition to the transformation of the Rijksmuseum, their most well-known projects include the new Atletico de Madrid Stadium, which will also be the new Olympic Stadium if the Madrid 2020 Olympic bid is successful (due for completion in 2016); the Spanish Pavilion at the Hannover 2000 Expo; the Cartuja Stadium in Seville (1999); the extension to the SBB Railway Station in Basel, Switzerland (2003); Seville Public Library (1999); the Stadium of the Community of Madrid(2012); the Huelva Bus Station (1994); Santa Justa Railway Station in Seville (1991); and a housing project on Dona Maria Coronel Street, Seville (1976).

In 2002 Cruz y Ortiz opened a studio in Amsterdam, and the firm's other Dutch projects include the Atelier Building (Rijksmuseum - Amsterdam, 2007), residences Patio Sevilla (Ceramique - Maastricht, 2000) and Java-eiland (Amsterdam, 1994).

Antonio Cruz and Antonio Ortiz have been visiting professors at the Lausanne and Zurich polytechnics as well as at Cornell and Columbia universities and at the Escuela de Arquitectura de Pamplona. They have held the Kenzo Tange Professorship at Harvard's Graduate School of Design, and since 2004 have been honorary professors at the Universidad de Sevilla and occupied the Catedra Blanca at the Escuela de Arquitectura. Antonio Cruz and Antonio Ortiz have received, among others, the Premio Nacional de Arquitectura Espanola, the Premio Ciudad de Sevilla, the Premio Ciudad de Madrid, the Brunei 92 International Award, the Premio Construmat and the Premio de la Fundacion C.E.O.E. On two occasions, they have been runners-up for the Mies van der Rohe Award. In 1997 they were awarded the Gold Medal of Andalusia for their work in the field of architecture, and in 2008 they obtained the Premio Andalucia de Arquitectura for the Basel Railway Station extension.