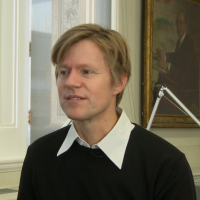 Dagur Eggertsson was born in 1965.He is an architect with a professional background from a number of the most prominent offices in Oslo.  After his professional degree from the Oslo School of Architecture in 1992, he started his collaboration with architect Vibeke Jenssen, as NOIS architects.  In 1996 he finished a post-professional master’s degree at the Helsinki University of Technology, where he started experimentation with building full scale architectonic objects, under the supervision of Professor Juhani Pallasmaa.

Along with his professional practice, Eggertsson has taught architecture in Norway, Iceland and Sweden.  He is currently a project examinator at the Oslo School of Architecture.

In 2007, Eggertsson started collaboration with architect Sami Rintala, which resulted in establishment of the office Rintala Eggertsson Architects. The office is based in Oslo and Bodø, Norway.