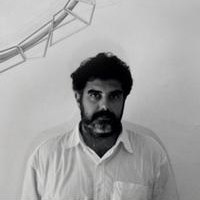 Enric Miralles Moya (Barcelona 1955 - Sant Feliu de Codines 2000) studied at the Barcelona School of Architecture, ETSAB, graduating in 1978. From 1973 to 1983 he collaborated with Albert Viaplana and Helio Piñón, and in 1984 he founded the Enric Miralles and Carme Pinós studio, from this stage one of his most poetic works stands out, such as the Igualada Cemetery. In 1993 he began the EMBT study with his wife and partner Benedetta Tagliabue.

Considered an architect of great inventiveness, he defined himself as the enfant terrible of Spanish architecture. He was a Fulbright Visiting Professor at Columbia University for the 1980-81 academic year. Two years later, he presented his doctoral thesis "Things seen to the left and the right, (without glasses)."

Since 1985 he was professor at ETSAB (Escuela Técnica Superior de Arquitectura de Barcelona), holding the Chair of Architecture since 1996. In 1990 he began as Director and Professor of the Master Class at Städelschule of Frankfurt and beginning in 1992 served as the "Kenzo Tange Chair” professor at the GSD of Harvard University. Moreover, he was visiting professor and lecturer at several universities in the United States (Columbia, Princeton, Harvard, Yale), Germany, the United Kingdom, Italy, the Netherlands, and a member of the Royal Incorporation of Architects in Scotland.

As an architect of many works, his projects include, the Igualada Cemetery in Spain (1995) and the rehabilitation of Utrecht City Hall in Holland (2000). He was also active as an interior designer, with projects including The Hipostila shelving system(1989) in collaboration with Lluis Clotet and Oscar Tusquets Blanca for Bd Ediciones de Diseño, Lungomare Bench for Escofet,(2000), Vacante bench for Sellex (1991), and many other furnishing designs which were not put in production.

He has received numerous awards, including the National Prize of Spanish Architecture 1995, FAD Prize (Fomento Artes Decorativas) 1985 and 2000, The European ITALSTAD (Italy) 1991. Leone d’Oro Prize at the Biennale di Venezia 1996. His work has been published internationally in the most distinguished reviews, El Croquis N.100 101, Enric Miralles Benedetta Tagliabue 1996-2000. GG. Miralles Tagliabue Time Architecture 1999. Electa, Documenti di Architettutra. Benedetta Tagliabue. Enric Miralles: Opere e Progetti. 1996. In 1999 he was named an Honorary member of The Royal Incorporation of Architects in Scotland. In 2002 he received posthumously the Gold Medal from the Col·legi d'Arquitectes de Catalunya.