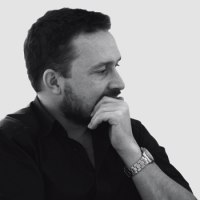 Sami Rintala was born in 1969.He is an architect and an artist, with a long merit list after finishing his architect studies in Helsinki Finland 1999. He established architect office Casagrande & Rintala 1998, which produced a series of acknowledged architectural installations around the world during the next five years until 2003. These works combine architecture with critical thinking of society, nature and the real tasks of an architect, all within a cross-over art field using space, light, materials and human body as tools of expression.

Rintala had his first wider recognition in 1999 with the project Landescape, three abandoned wooden barns were raised on 10 meter high.

In Venice Biennale 2000 Sixty Minute Man was realized; A ship sailed to Arsenal with a garden inside. The park was planted on sixty minutes of human waste from the city of Venice, becoming together with the old boat a three dimensional collage.

Important part of Rintala’s work is teaching and lecturing in various art and architecture universities. Teaching takes place usually in form of workshops where the students often are challenged to participate the shaping of human environment on a realistic 1:1 situation.