The Chilean designer and artist Sebastian ErraZuriz will present in collaboration with the New Museum his latest work of art called "blu Marble", on Ludlow Street, Manhattan. The work will show a live transmission of the planet Earth from outer space. Visible day and night, the installation will be on display from March 13. 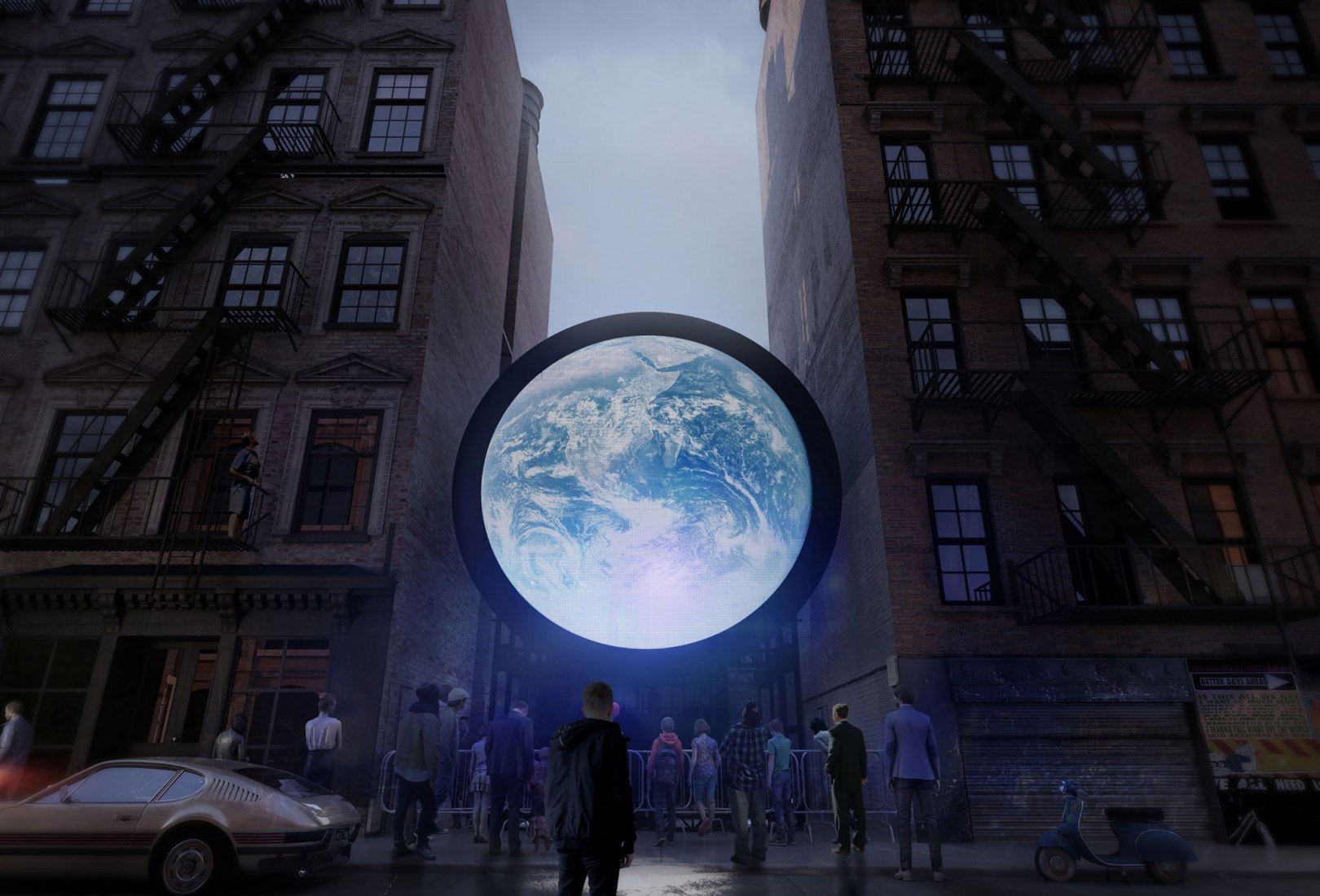 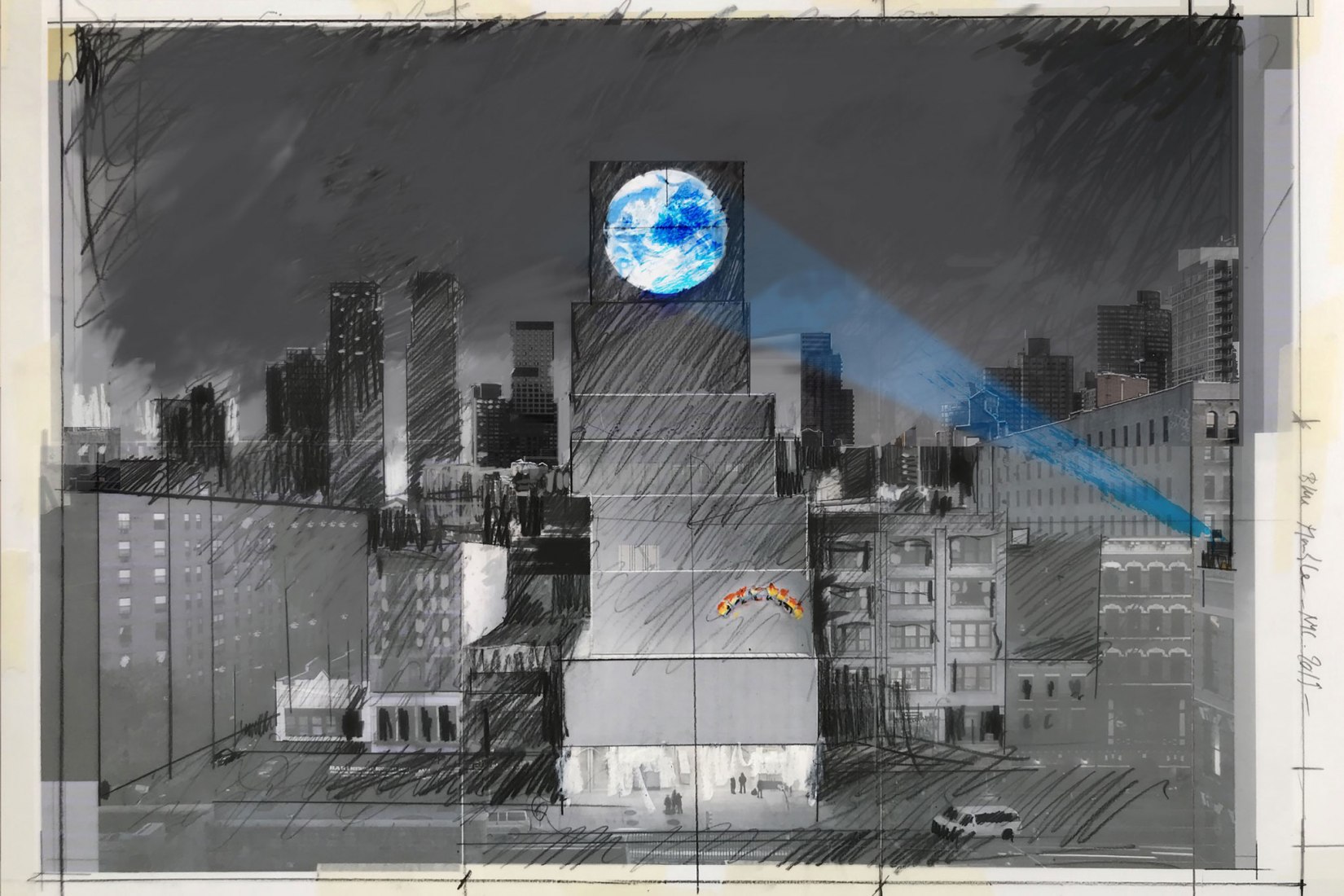 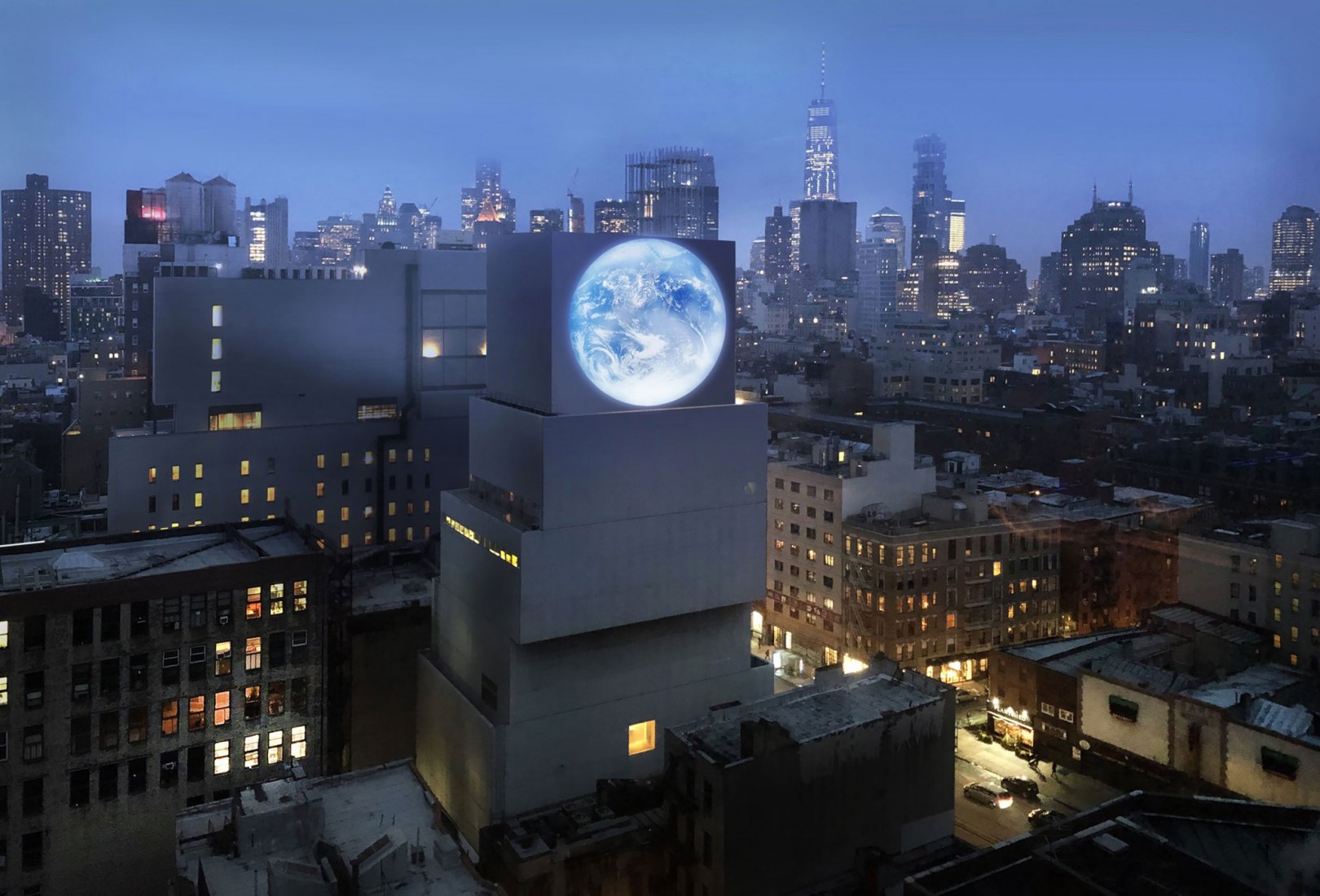 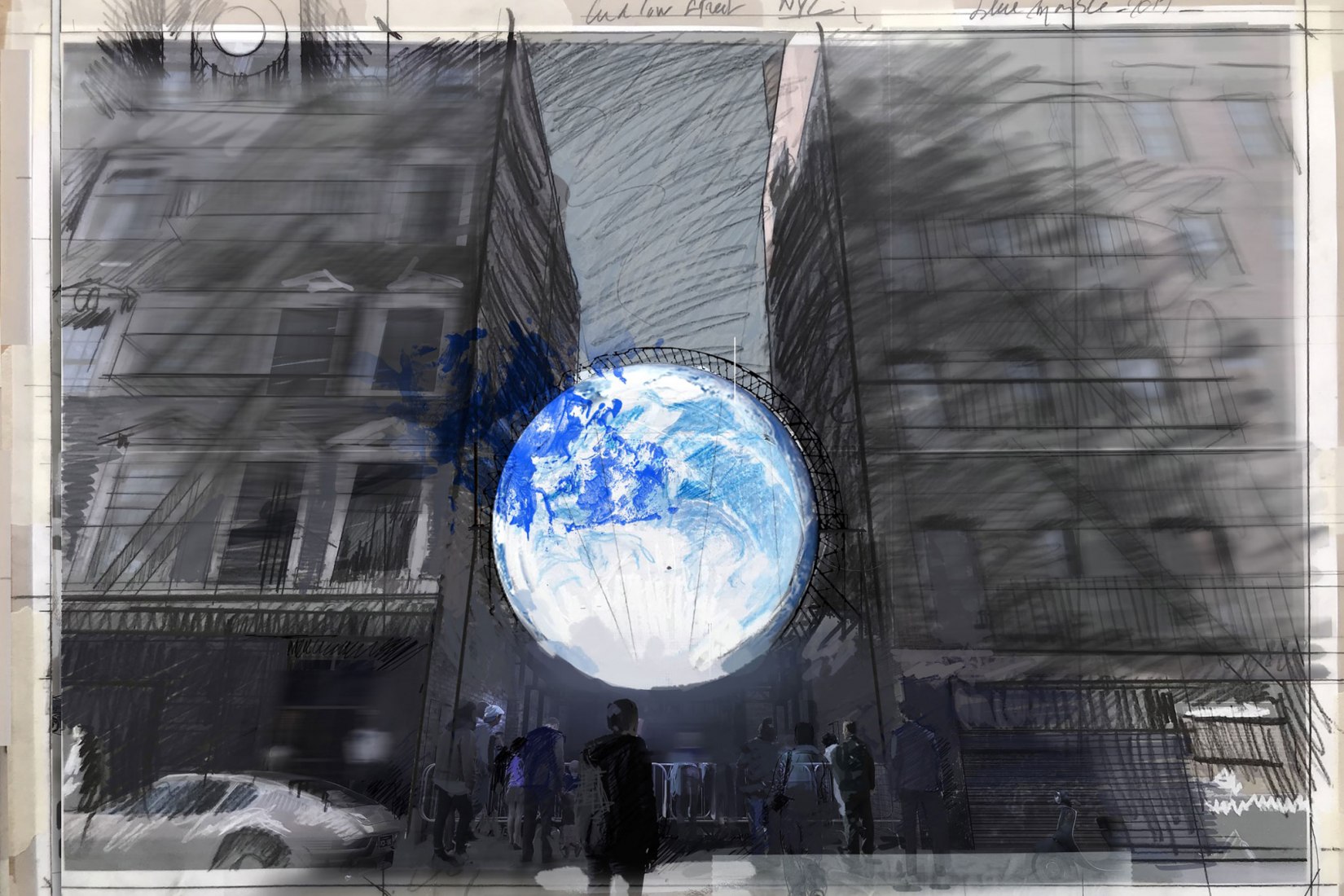 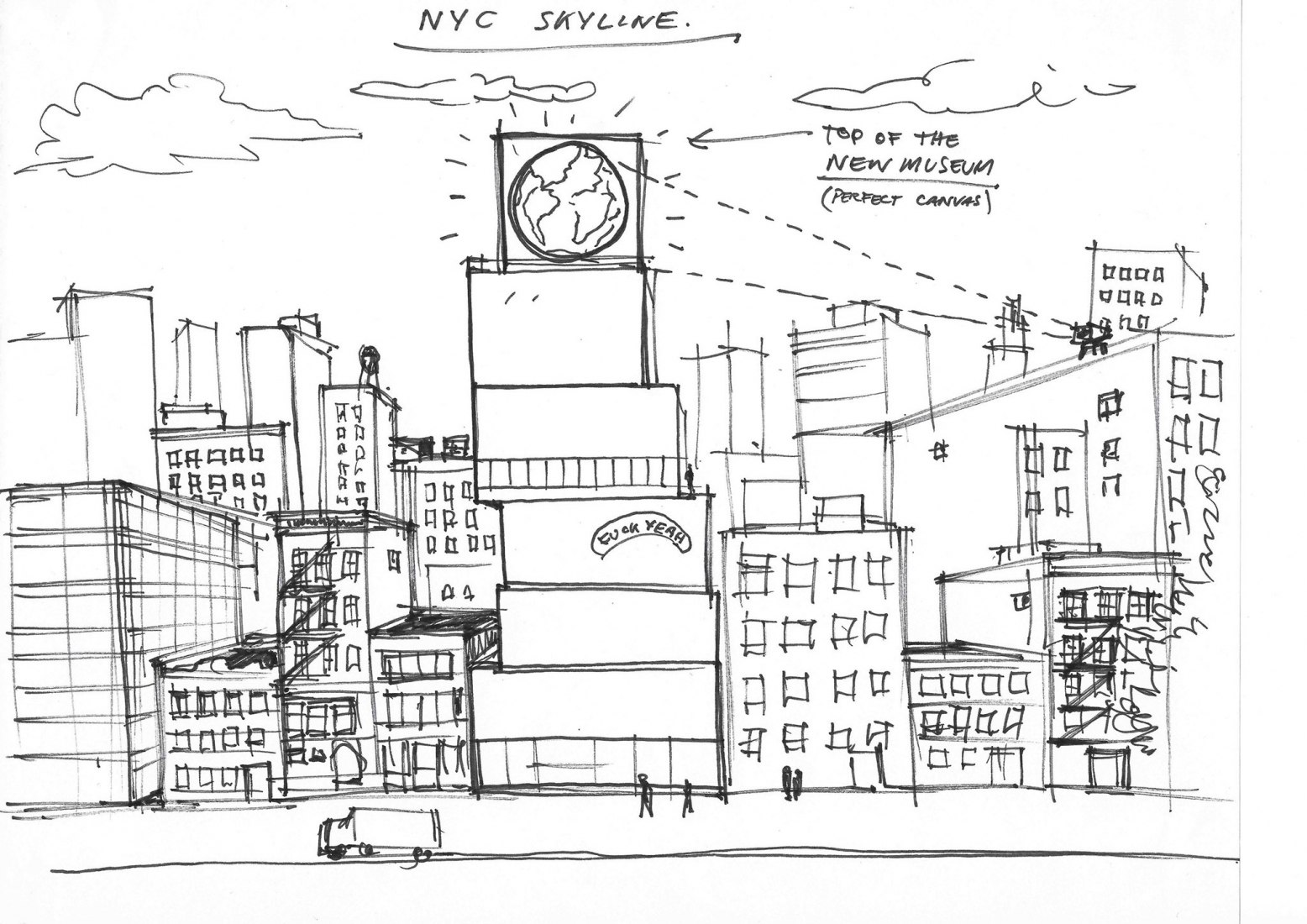 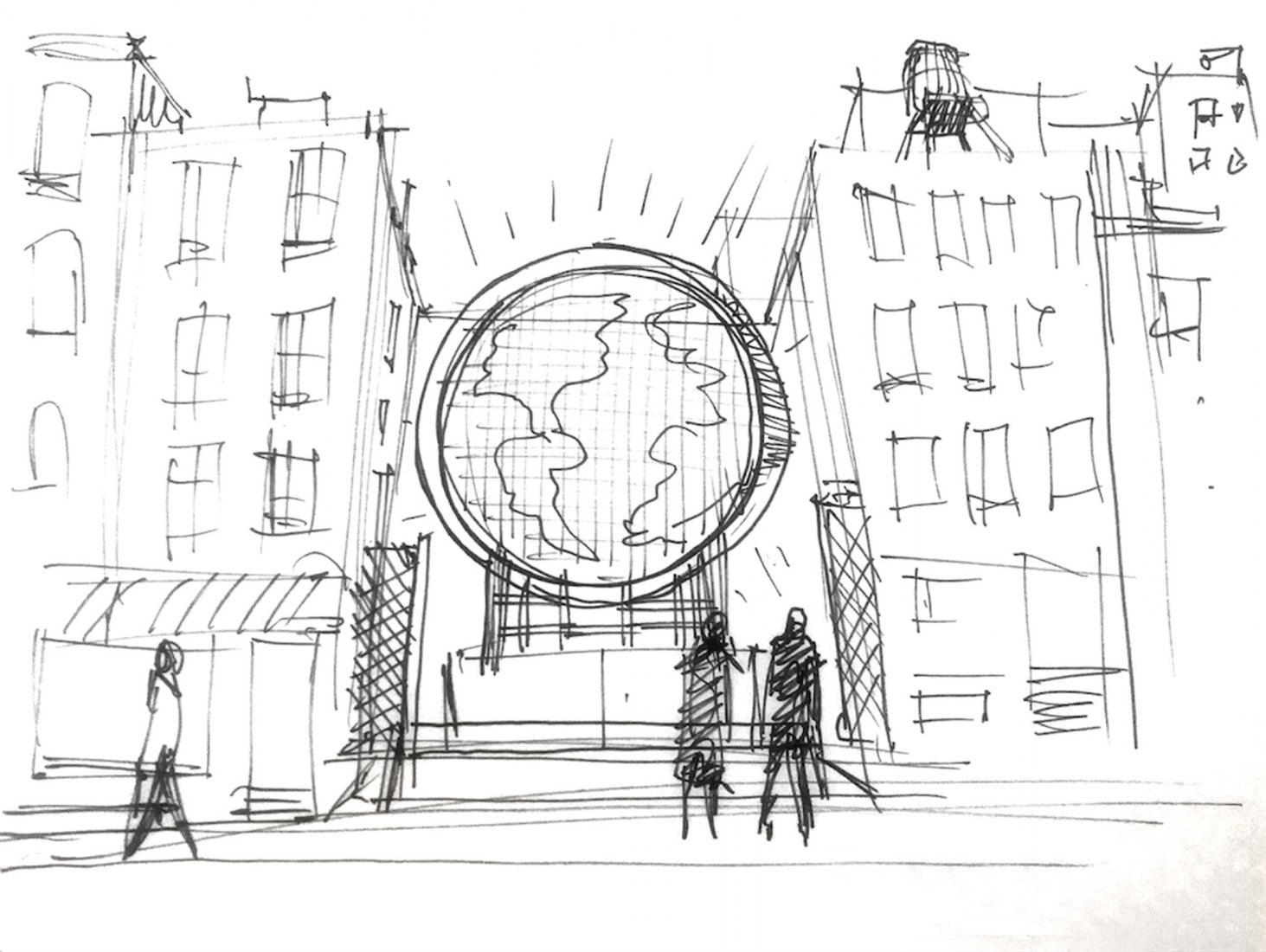 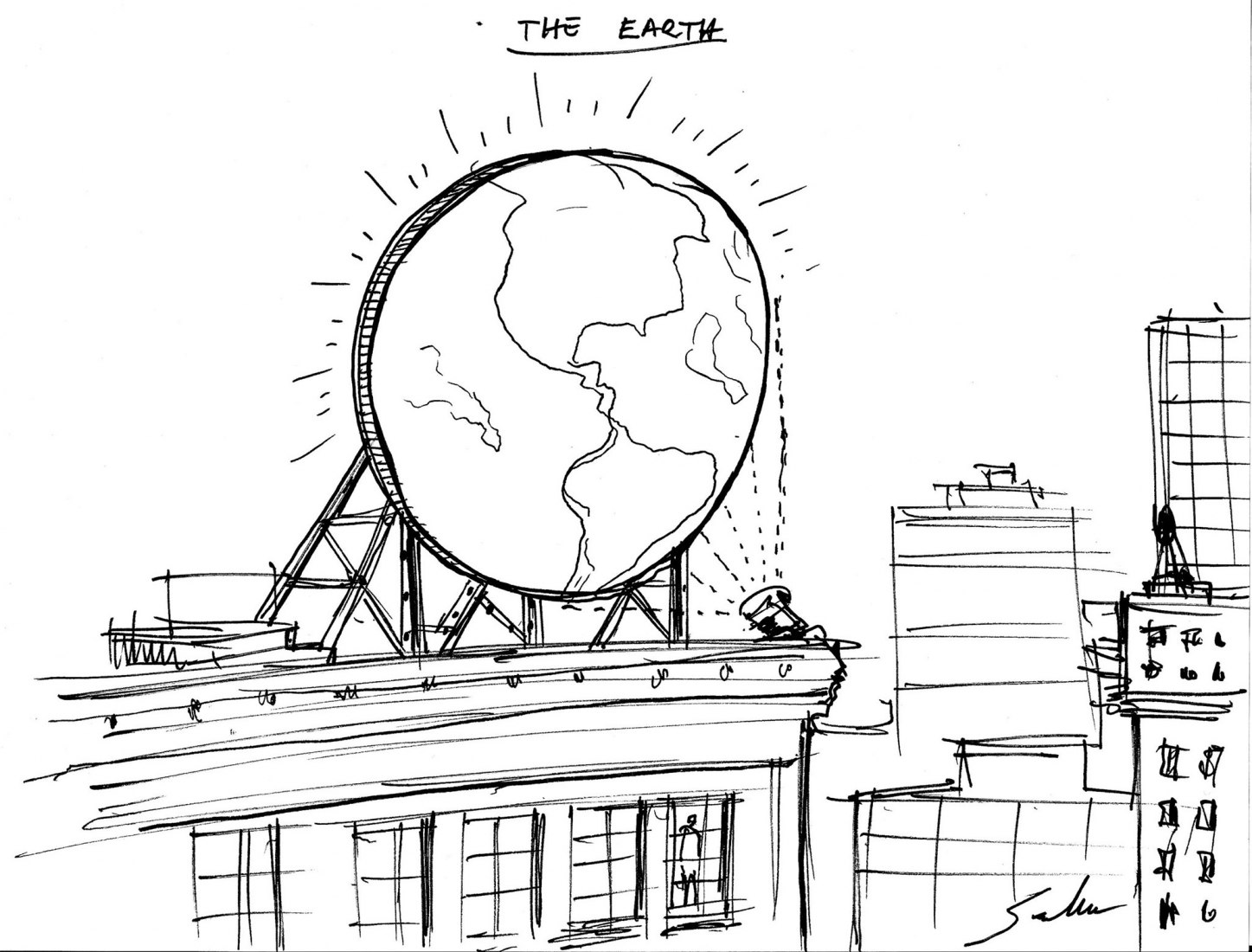 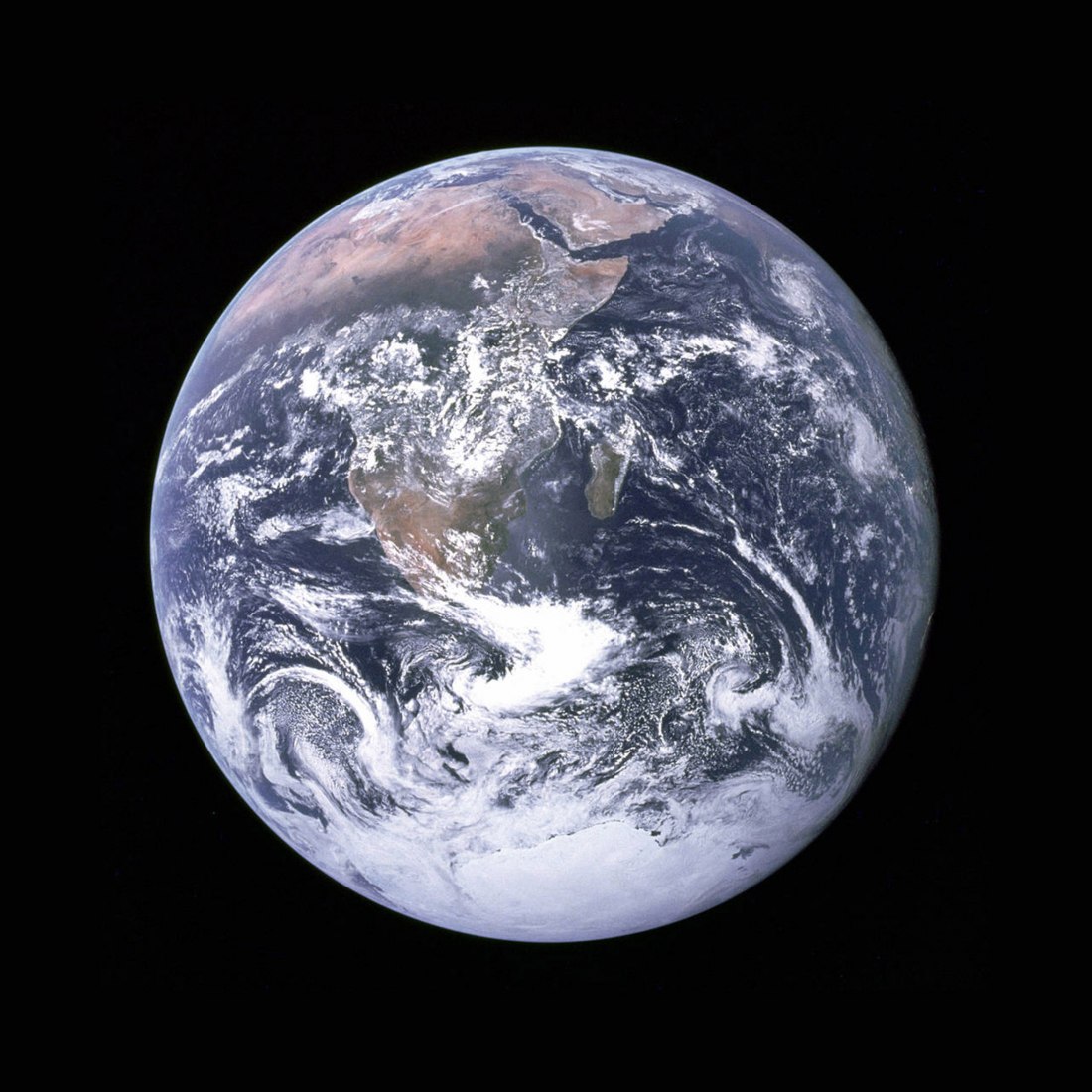 The design of Sebastian ErraZuriz consists of the transmission of the planet Earth represented by a monumental LED structure of 20 feet. With this work the artist wants the public to consider their presence in a way and scale that has never been experienced before. The work offers a new perspective on our existence and hopes to help humanity to achieve positive change.

New York based Artist, designer, activist Sebastian ErraZuriz is renowned for his innovative approach that subverts conventional categorization and mixes genres, techniques, and disciplines. Errazuriz’s experimental practice is informed by his desire to provoke conversation and raise awareness. His expansive body of work blurs the boundaries between contemporary art, tech, design and craft.

His exclusive masterpieces are avidly acquired by art collectors and museums. Errazuriz’s interdisciplinary approach invites the viewers to consider the ways in which any work can be simultaneously conceptual and functional, inviting the viewer to look again at realities that were often hidden in plain sight.

“blu Marble is a reminder of our miraculously fragile existence. It places our very existence in perspective at a global level – as a tiny spec in space – beckoning us to live fully with an awareness and mindfulness of our limited time on this vulnerable and beautiful planet”

Description of project by Sebastian ErraZuriz

The groundbreaking project will be launched in Manhattan on March 13th, showcased at 159 Ludlow Street with a private launch at Richard Taittinger Gallery. For one night only, there will be a neighborhood display in cooperation with the New Museum, where blu Marble will transform the Manhattan skyline.

The artwork features a custom-created LED screen that projects Earth in real time from space. To obtain this imagery, Sebastian’s team created a bot that scrapes live photographs from a NASA satellite and merges them in an exclusive software that generates a slow progression between still images to compose a live video of Earth as seen from space.

Typically used to monitor and study daily variations of vegetation, ozone, aerosols, clouds, reflectivity, etc., these new-generation satellites allow the live stream of our ever-changing Earth. The audience passing by the installation at night sees a partially dark Earth with clusters of light and, in contrast, meteorological conditions during the day.

2019 celebrates the 50th anniversary of the first person walking on the moon. This historical moment shifted the human perspective on limitation and possibility. Three years later, as Apollo 17 was on its last lunar mission, the crew took the renowned picture “Blue Marble” showing the first image of the Earth from space.

The original “Blue Marble” picture is the most widely reproduced image of the Earth, leaving us with a remarkable image frozen in time. blu Marble pays homage to the iconic picture by bringing it to life and substantially increasing its size to raise awareness to our need for perspective and introspection. blu Marble was made possible by the support of the innovative e-vapor company, Fontem Ventures, owner of one of the first US e-vapor brands, blu, as part of a new campaign, “Pledge World by blu,” which seeks to fulfill the dreams of adult consumers as they embark on a potentially life-changing journey.

The company invited Sebastian Errazuriz to make a pledge through Pledge World for a once-in-a-lifetime opportunity to make his ambitions a reality. Through Pledge World, blu has been helping adult consumers make life-affirming experiences a reality by granting real adult’s pledges and helping them own their choices for a more positive life. 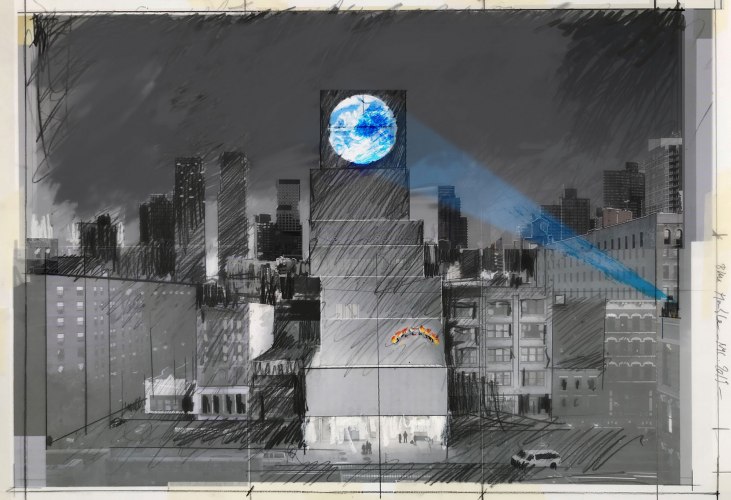 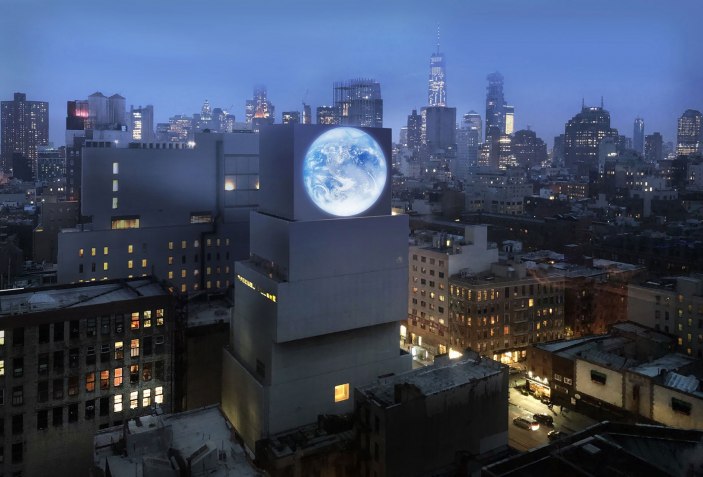 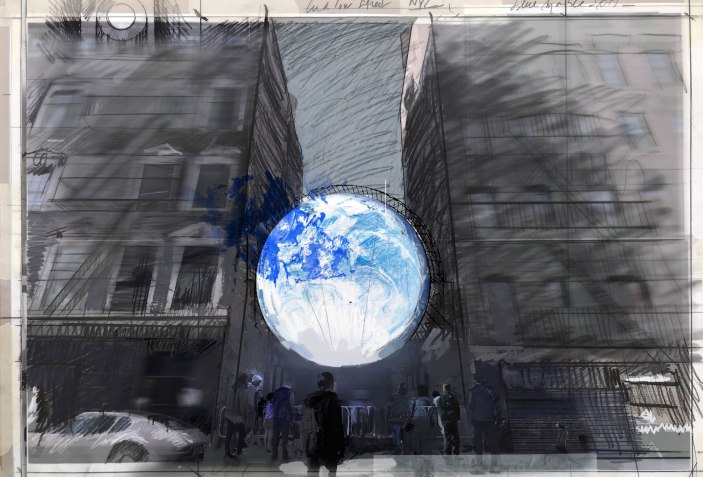 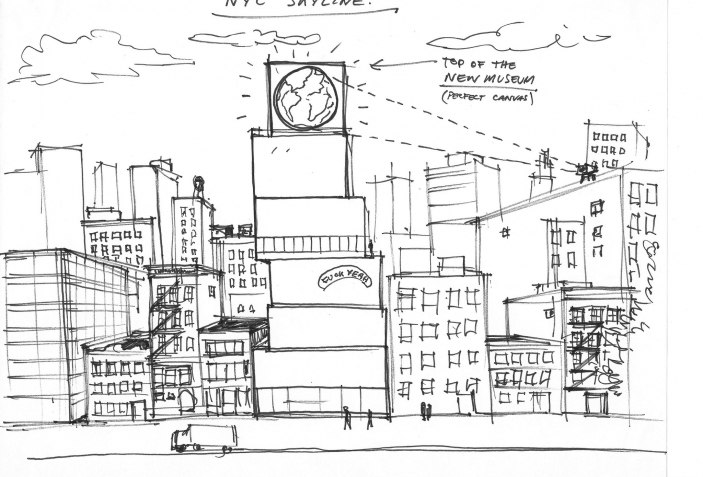 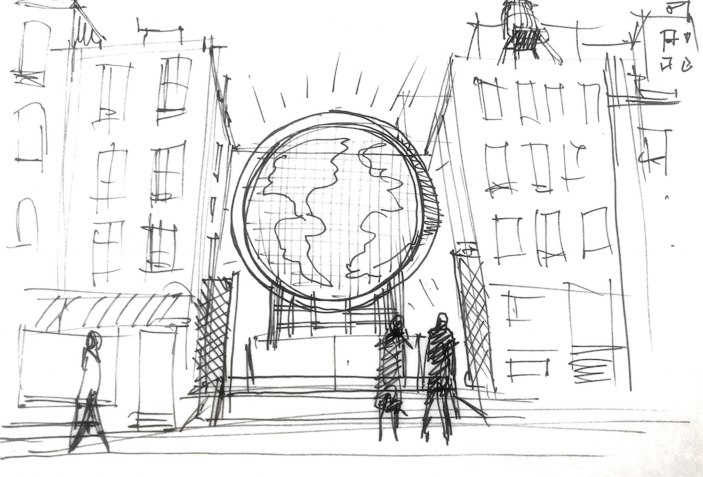 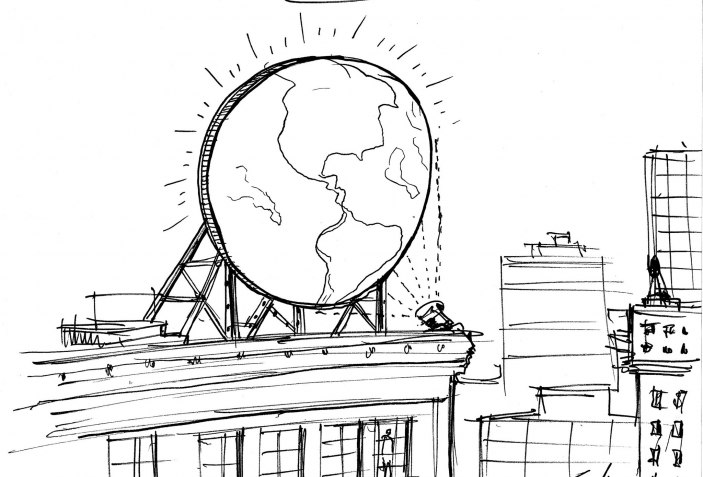 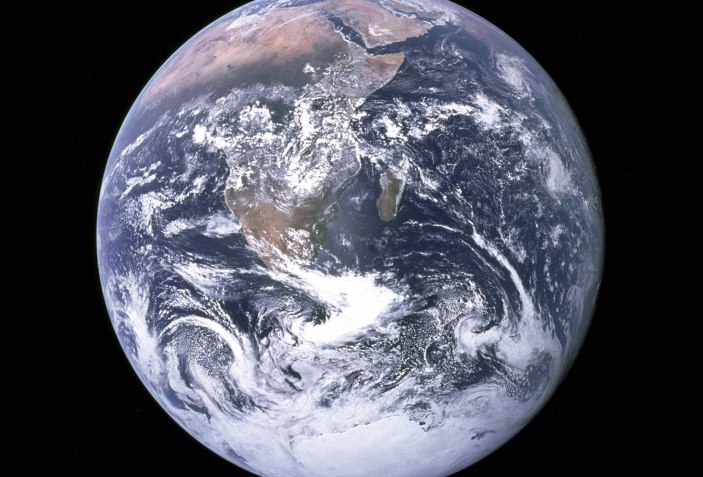 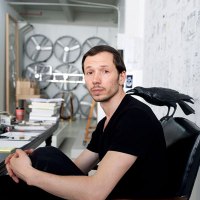 Sebastian Errazuriz (Santiago, Chile, 1977) has a degree in industrial design from the U.C Santiago and a master's degree in fine arts from the University of New York.

Some of his most recent exhibitions and installations in which he has worked individually are "Foundations", Art Basel's Collector's lounge in Hong Kong, Basel and Miami; "What you destroy we will rebuild" in London; or "The beginning of the end" in Santiago; all of them exposed in 2018.

Other of his latest works and exhibitions presented in 2017 have been "Second Nature", Art Basel's Collector's lounge also exhibited in Hong Kong, Basel and Miami; "Sebastian Errazuriz" in Tokyo; or "Augmented Reality artwork vandalized" in New York.

Between the years 2015 and 2016 it also has different exhibitions such as "Ice Cycle", Art Basel's Collector's lounge in Hong Kong, Basel and Miami; "Lord Stanley Cup" Finalist public art competition with JA Studio, in Ottawa and "A Pause in the City That Never Sleeps" in New York.

In addition to these mentioned works, Sebastián has made a large number of exhibitions in different cities around the world since 2004.

As for some of the last group exhibitions, "Curated selection of significant contemporary designs" in New York, 2018; "With Seven-league Boots Stop - Finland: Works from the Kiasma Collection" in Riga Latvia; or "Nous Sommes Foot" in Marseille, both two of 2017.

Other of his group exhibitions between 2014 and 2016 are "Sharing Economy" in New York and Philadelphia; "One and Many Chairs" in Cologne; or "New Territories" in New York.

Sebastian Errazuriz’s work has been exhibited internationally alongside the most celebrated artists, architects and designers and resides in permanent museum collections around the world. Sebastian Errazuriz is currently working on an exciting line-up of other global projects showcasing his work with augmented reality technology, virtual reality and digital platforms. The coverage of his creations has been a successive string of viral responses. Errazuriz has been featured in multiple magazine covers and portrayed in thousands of press articles. He has received critical acclaim from The New York Times, The Financial Times, The Wall Street Journal, The Atlantic, Forbes, Business Insider, Art+Auction among others. In addition, his work has been featured in mainstream TV on BBC, CNN, ABC, and NY1. 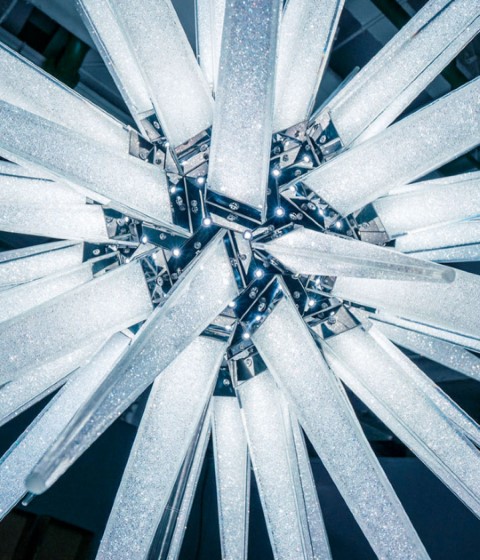 The star of the Wise Men. Swarovski Star for the Rockefeller Center by Daniel Libeskind 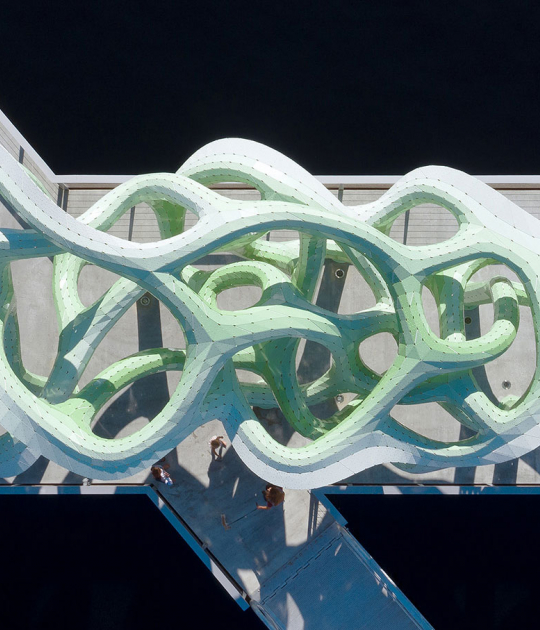 Form of Wander, an inverted mangrove on a pier by Marc Fornes / Theverymany 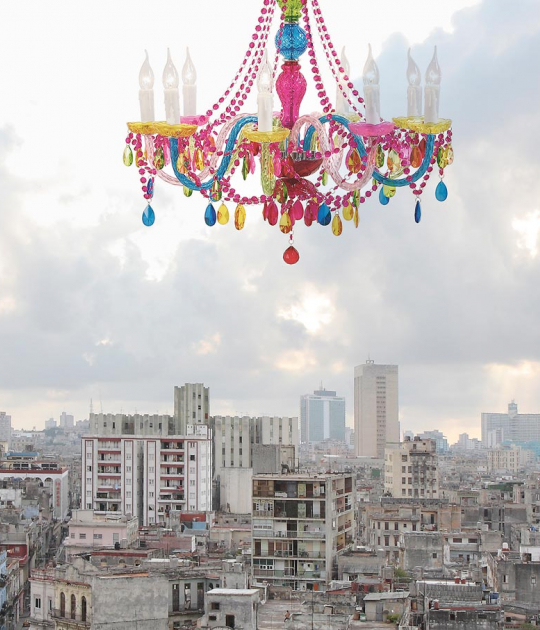 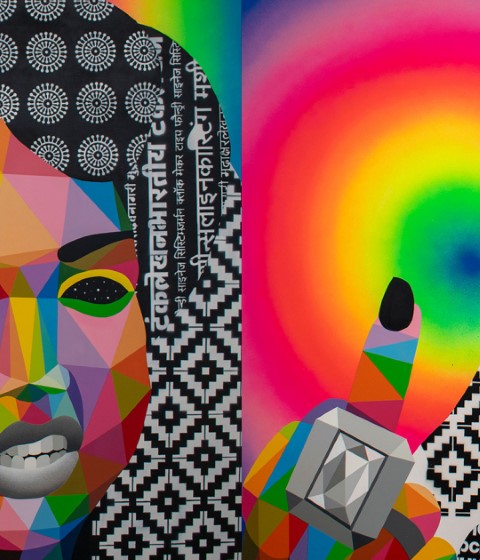 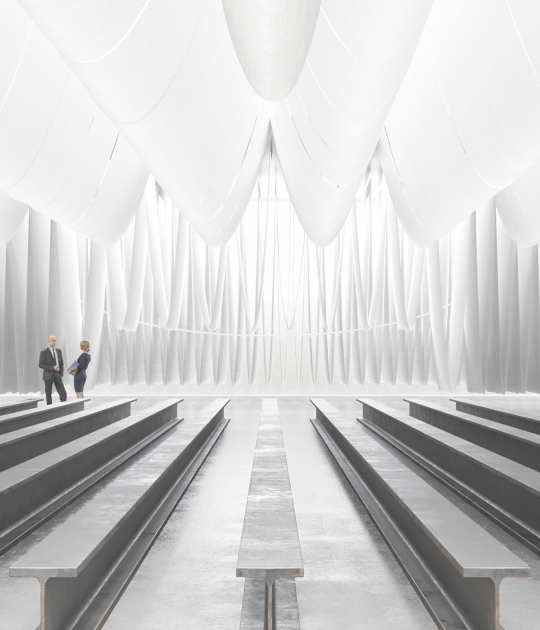