Yesterday the Nederlandse Tuinbouwraad (NTR) announced the City of Almere, along with it’s MVRDV-designed proposal, as winner of Floriade 2022: Horticultural expo as city centre extension. The event takes place once every ten years in the Netherlands and is currently ending in Venlo. 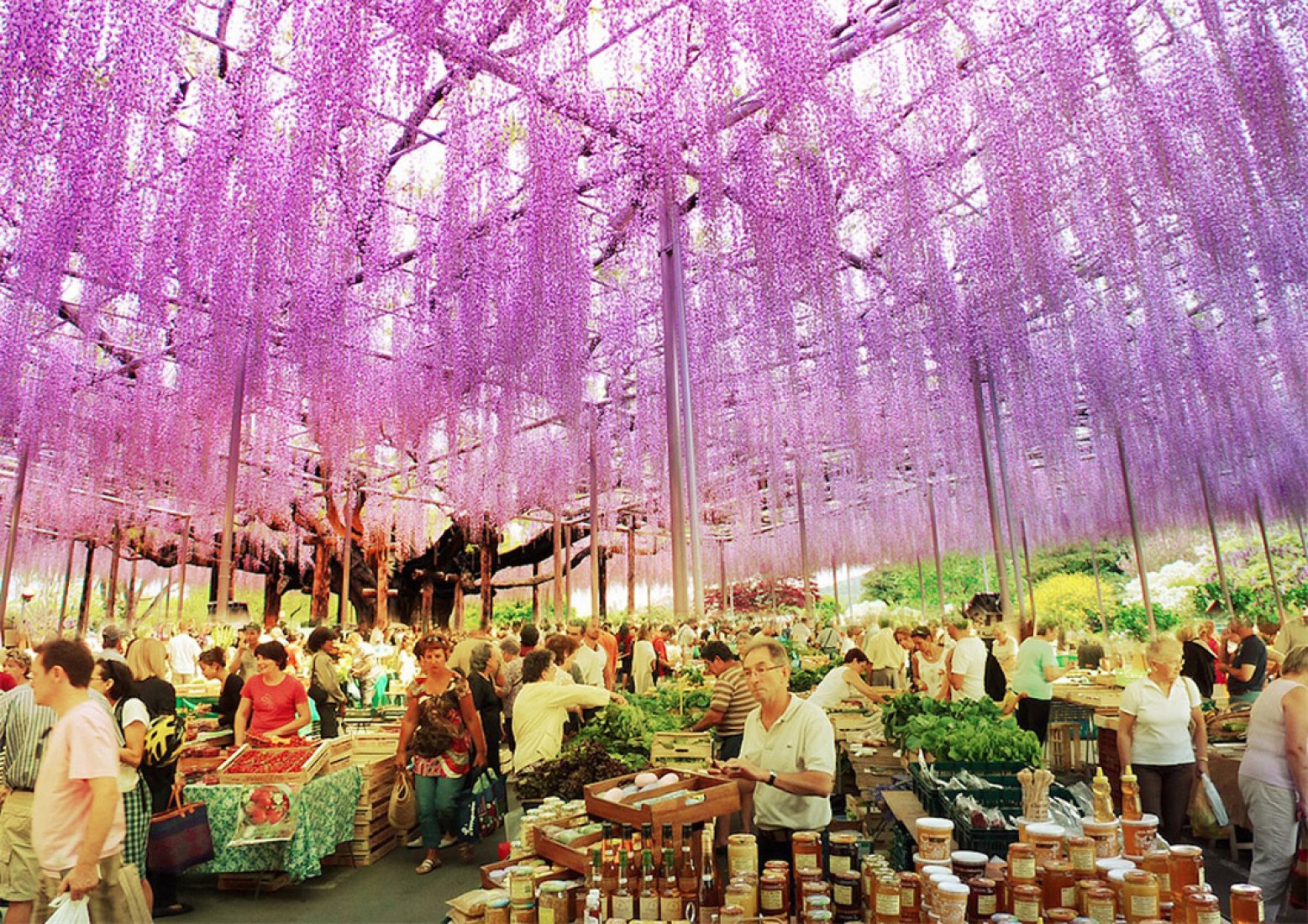 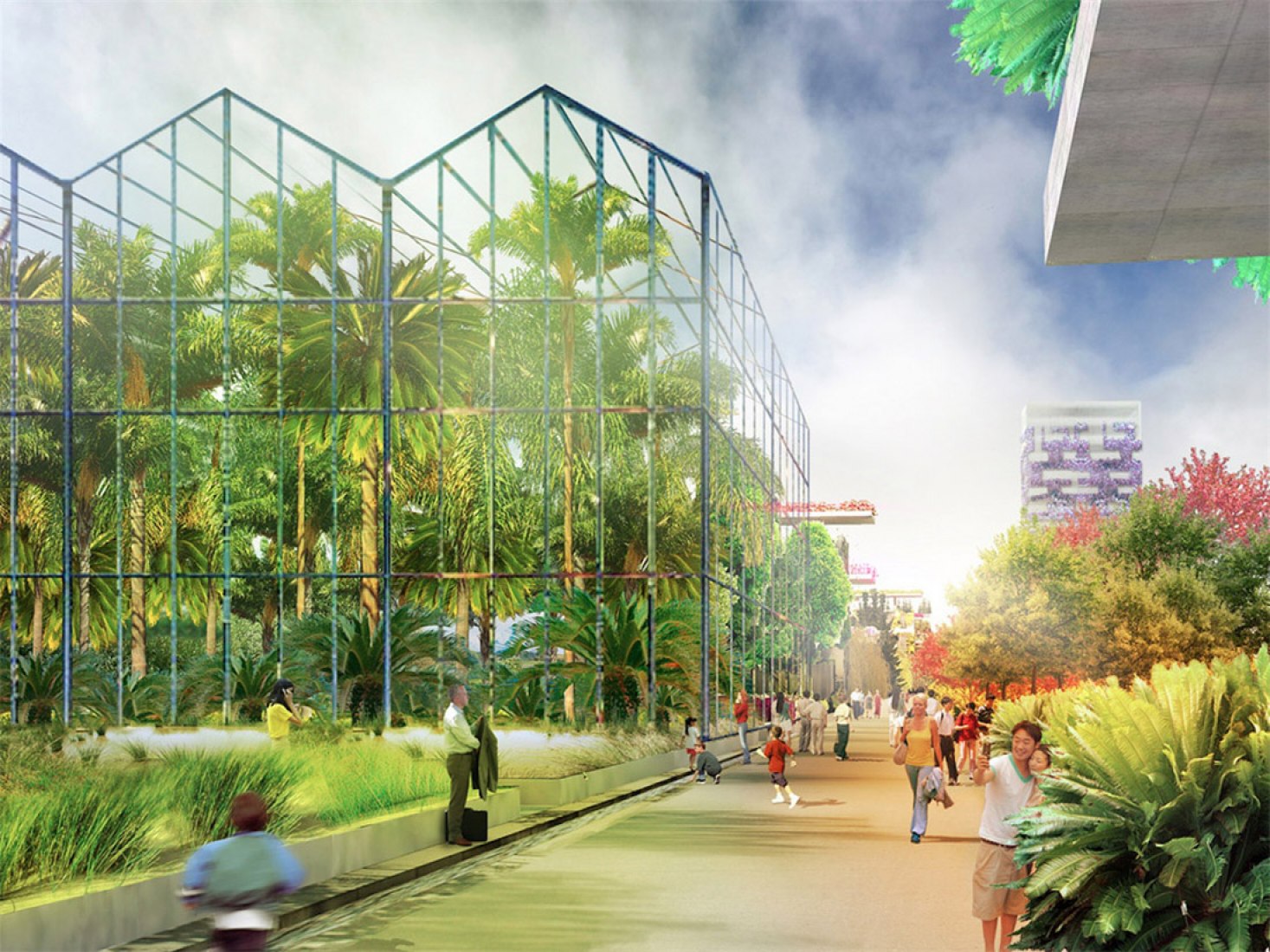 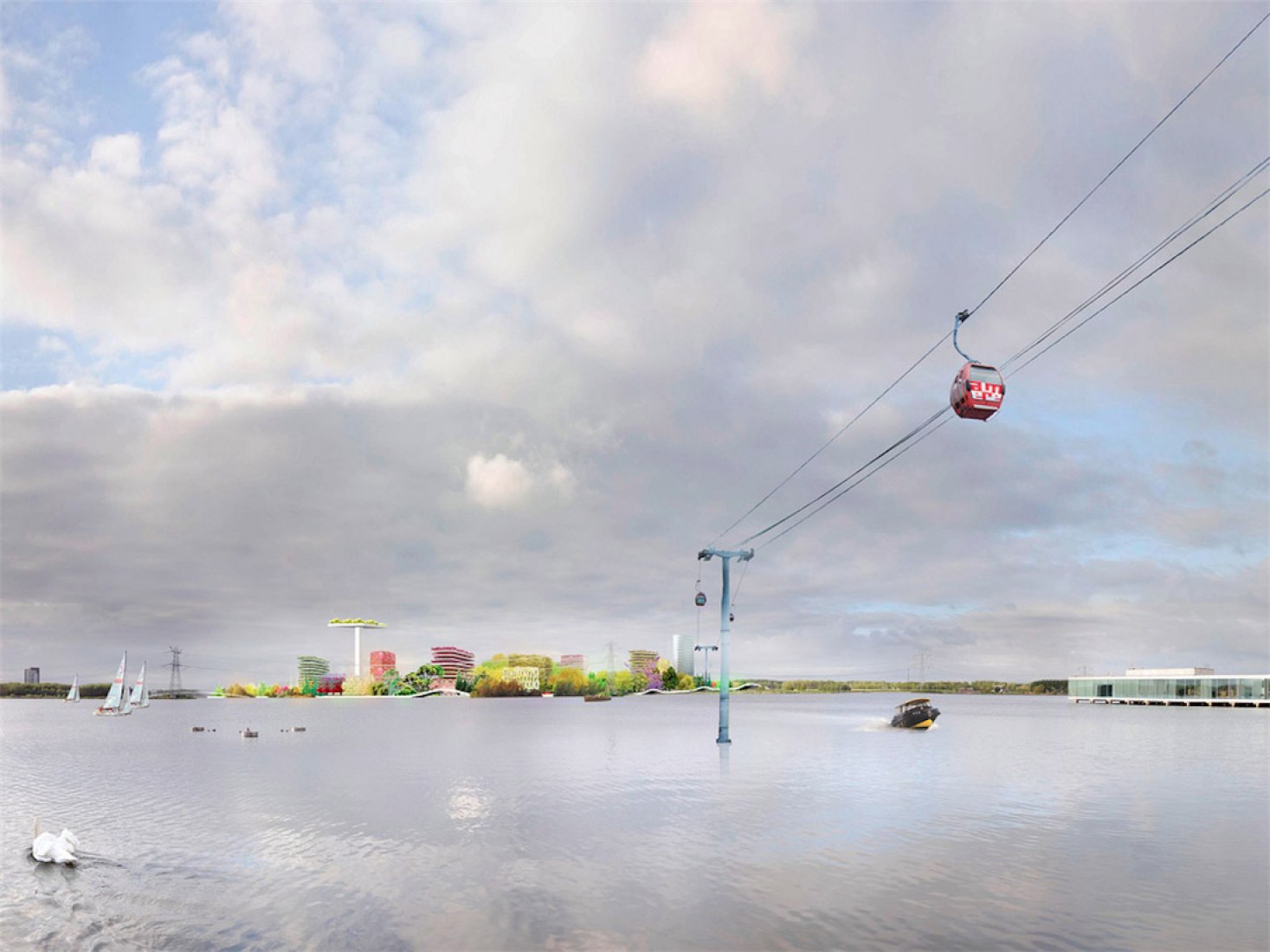 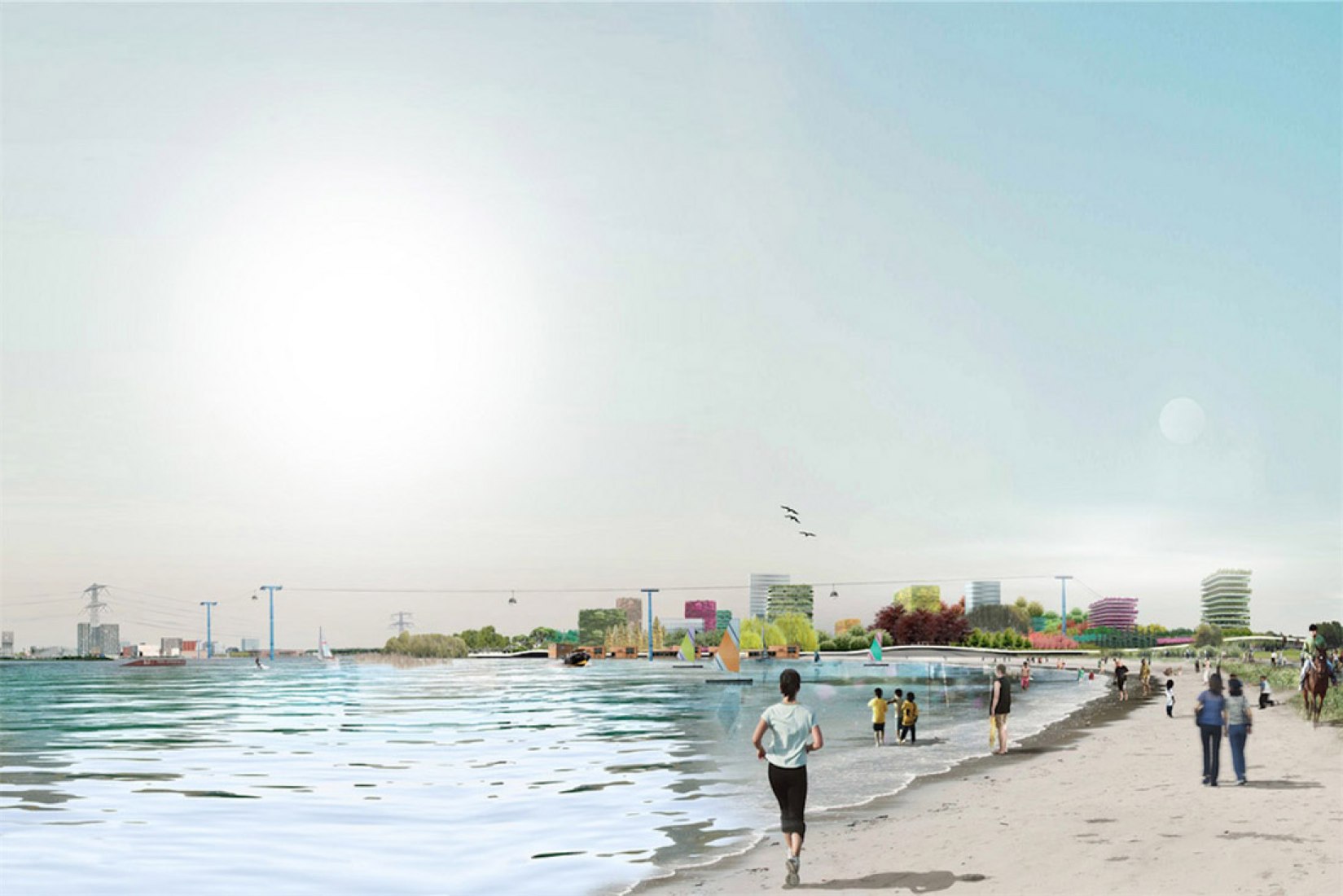 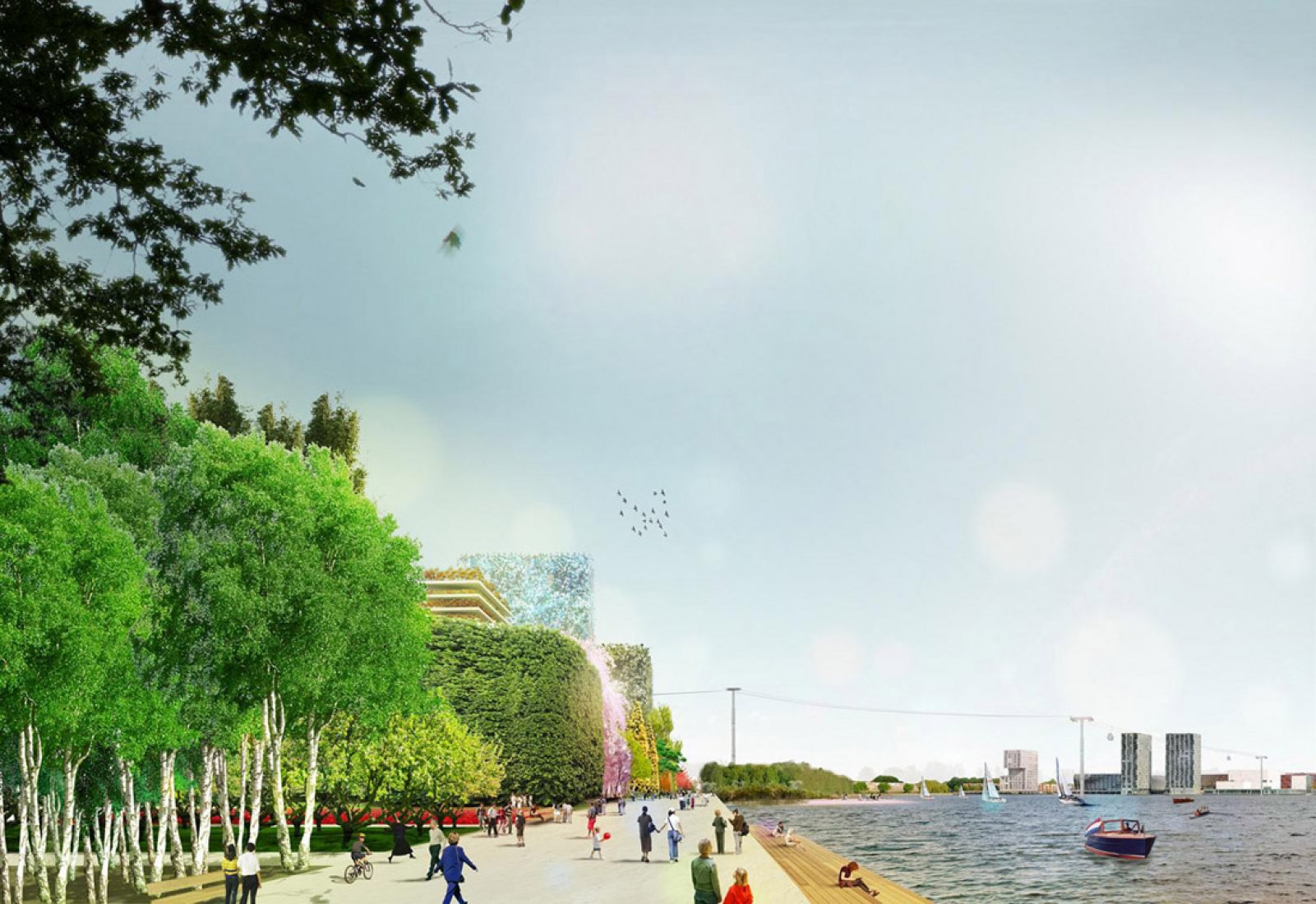 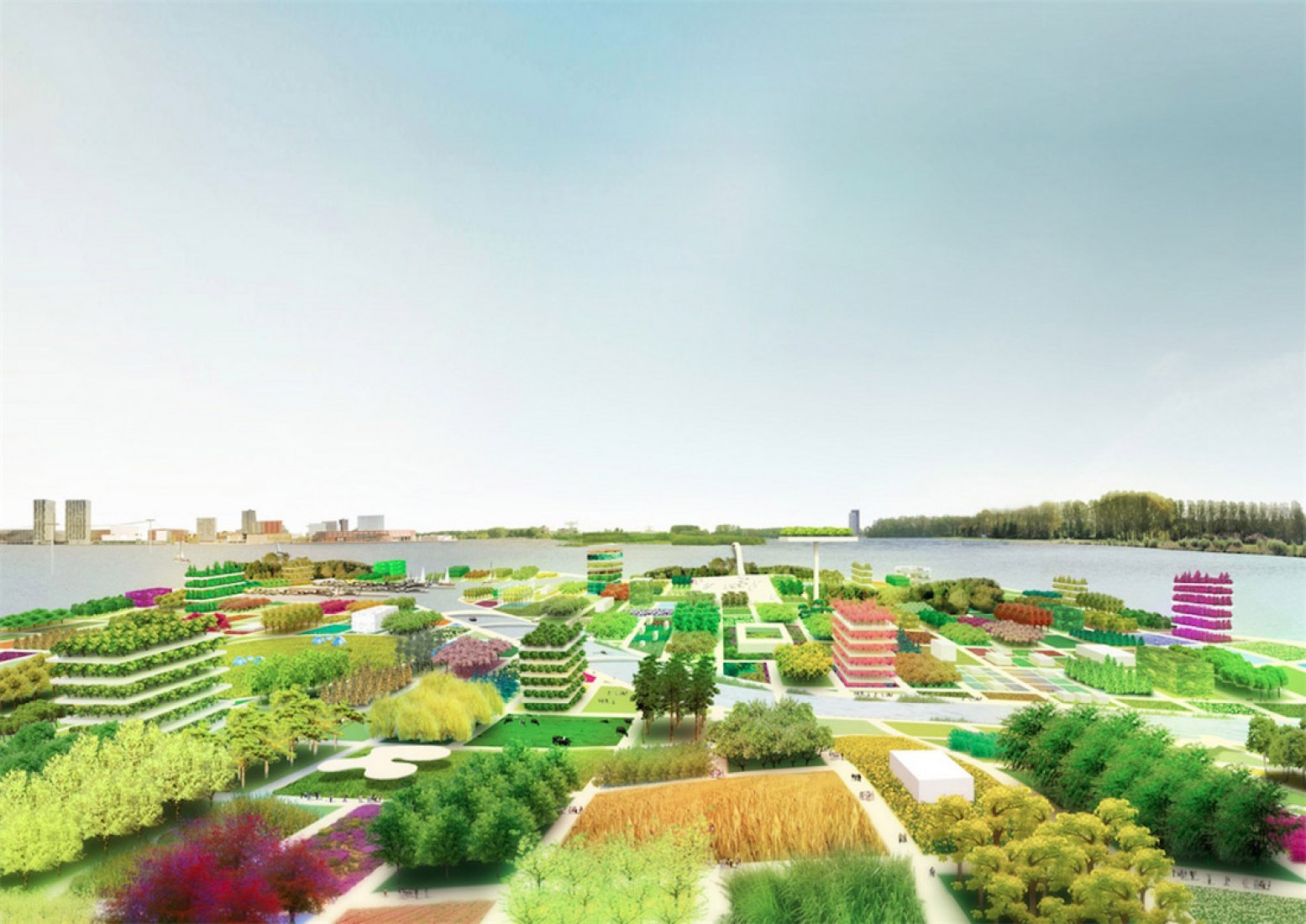 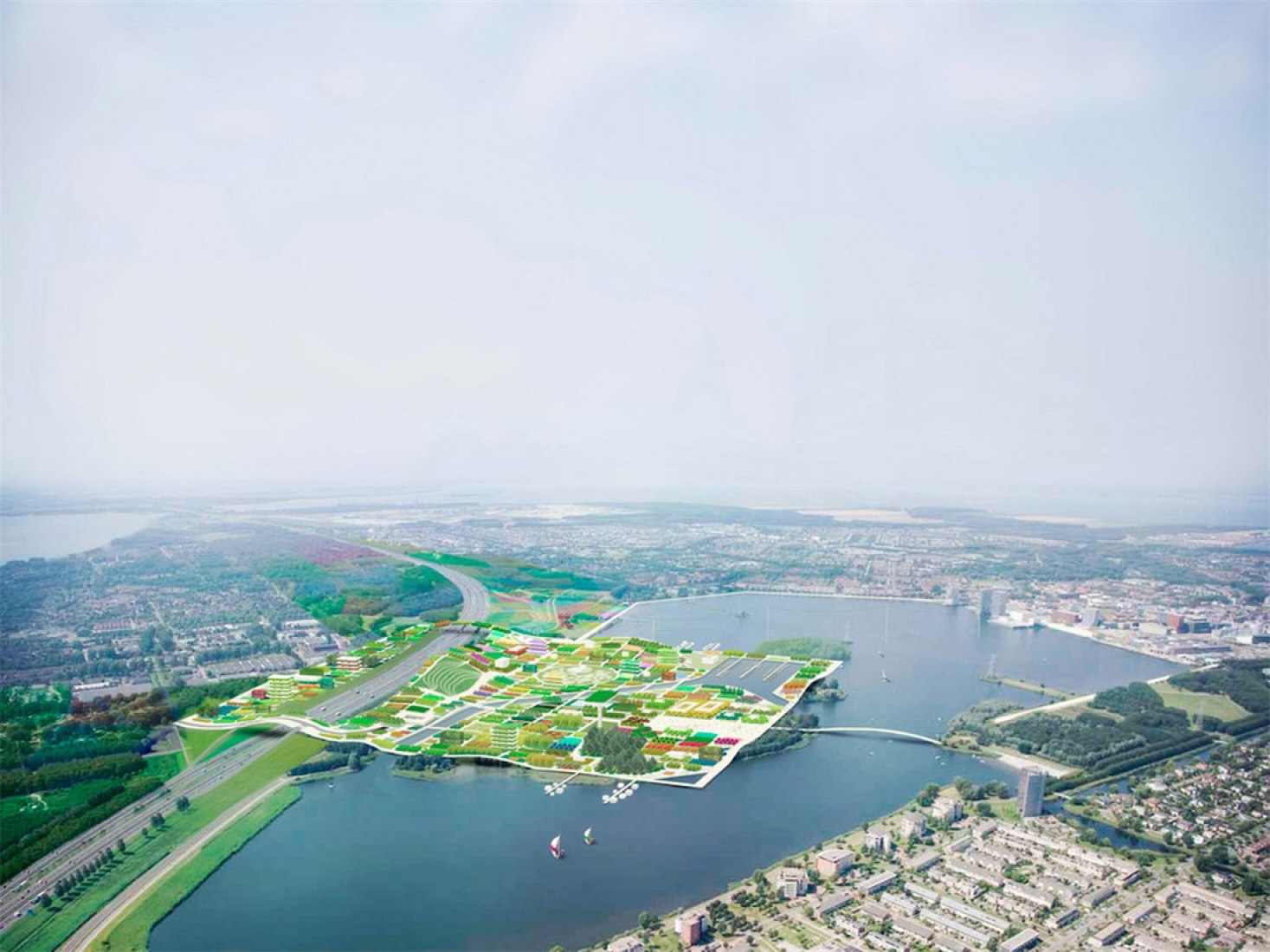 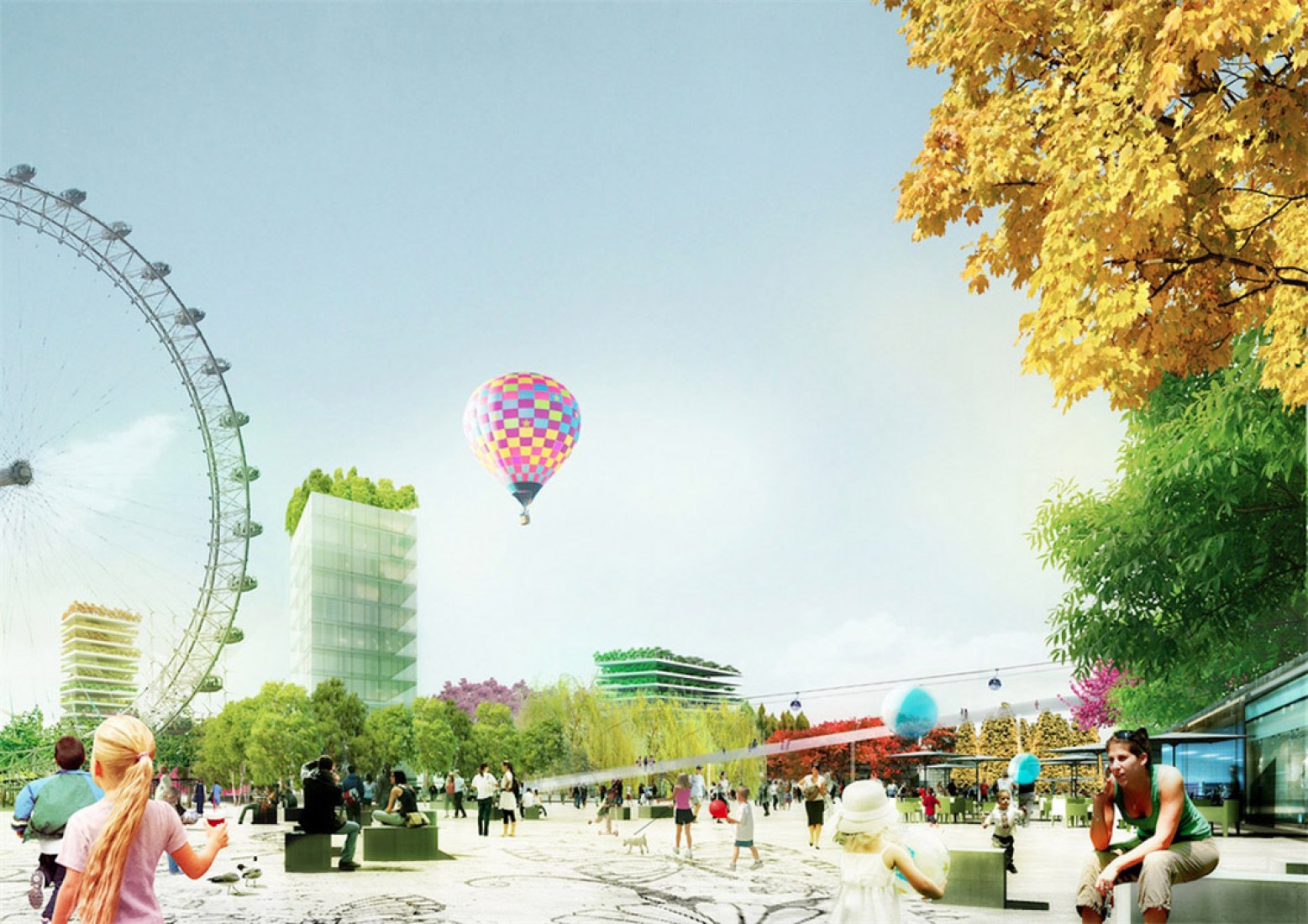 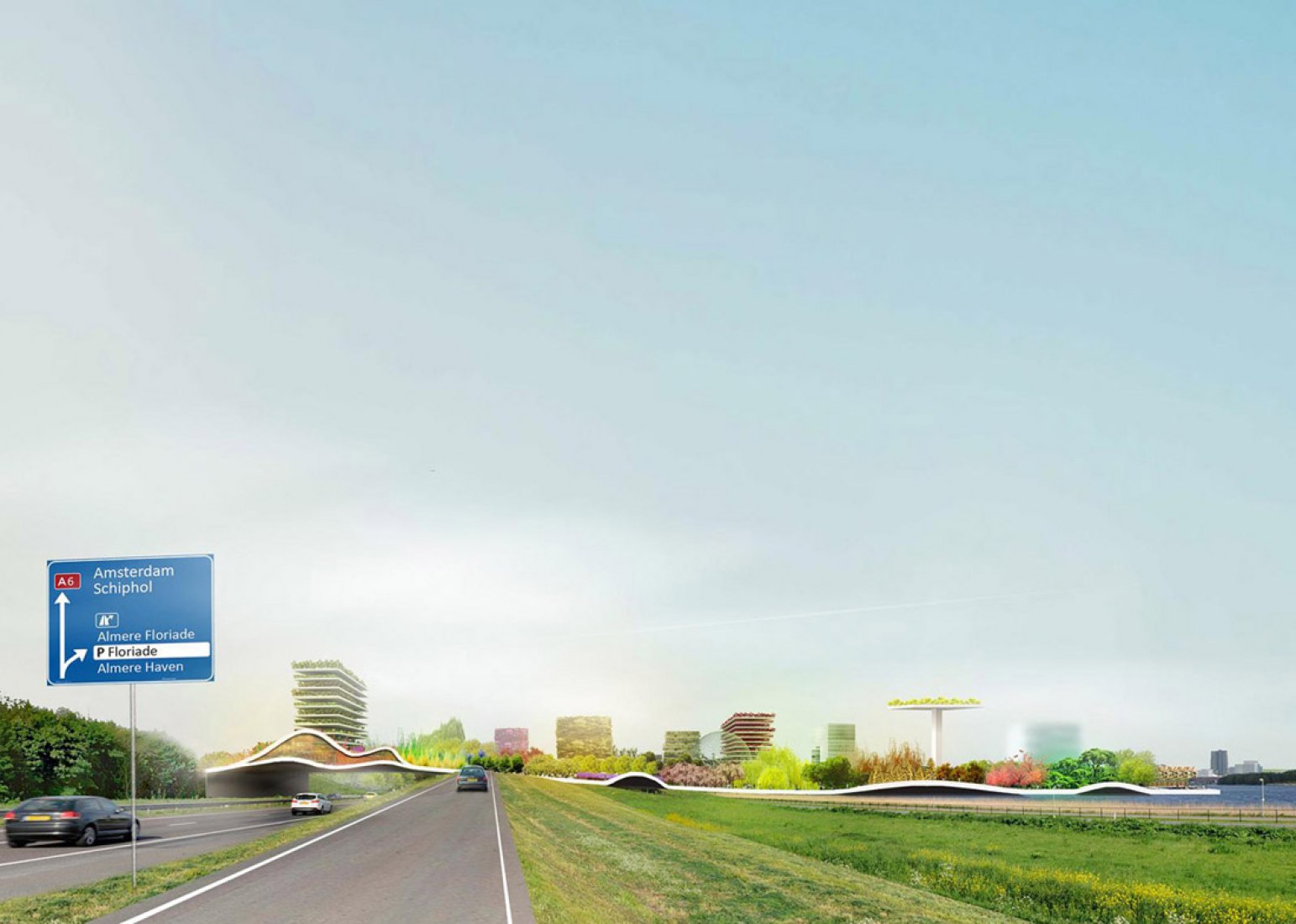 UThe MVRDV plan for Almere is not a temporary expo site but a lasting green Cité Idéale as an extension to the existing city centre. The waterfront site opposite the city centre will be developed as a vibrant new urban neighbourhood and also a giant plant library which will remain beyond the expo. The ambition is to create a 300% greener exhibition than currently standard, both literally green and sustainable: each program on the site will be combined with plants which will create programmatic surprises, innovation and ecology. At the same time the site will be with a va st program such as a university, hotel, marina, offices and homes more urban than any other Floriade has ever been before, it is an exemplary green city. Almere with MVRDV won the competition of Boskoop with OMA/Rem Koolhaas, Groningen with West 8 and Amsterdam Bijlmer with MTD Landscape Architect.

Amsterdams metropolitan area stands at the verge of a large population growth. Within this development the city of Almere will realise the largest new developments with 60.000 new homes. Almere has the ambition to realise the urban growth with improved life quality for its citizens. MVRDV is already urban planner for Almere 2030 and the DIY urbanism plan for Almere Oosterwold and now proposes the extension of Almere city centre opposite the existing centre, transforming the lake into a central lake and connecting the various neighbourhoods of the Dutch new town. The plan foresees a dense exemplary an d green city centre extension which at the same time is for now very flexible: An invitation to the Floriade organiser NTR to develop the plan further with the city.

Winy Maas: With Almere the Floriade has a new approach. We will build a city that is literally green as well as ecological. A city that produces food and energy, cleans its own water, recycles waste and holds a great biodiversity. A city which might even be autarkic: A symbiotic world of people, plants and animals. Can this symbiosis between city and countryside offer essential argumentation to the global concerns regarding of urbanisation and consumption? We will realise in the next ten years an exemplary city which realises this synthesis. This is our chance to realise the ideals MVRDV is propagati ng for the last 20 years. We are thrilled to be working on this exciting project.

Almere Floriade will be a grid of gardens on a 45ha square shaped peninsula. Each block will be devoted to different plants, a plant library with perhaps an alphabetical order. The blocks are also devoted to program, from pavilions to homes, offices and even a university which will be organised as a stacked botanical garden, a vertical eco-system in which each class room will have a different climate to grow certain plants. Visitors will be able to stay in a jasmine hotel, swim in a lily pond and dine in a rosary. The city will offer homes in orchards, offices with planted interiors and bamboo parks. The Ex po and new city centre will be a place that produces food and energy, a green urban district which shows in great detail how plants enrich every aspect of daily life. 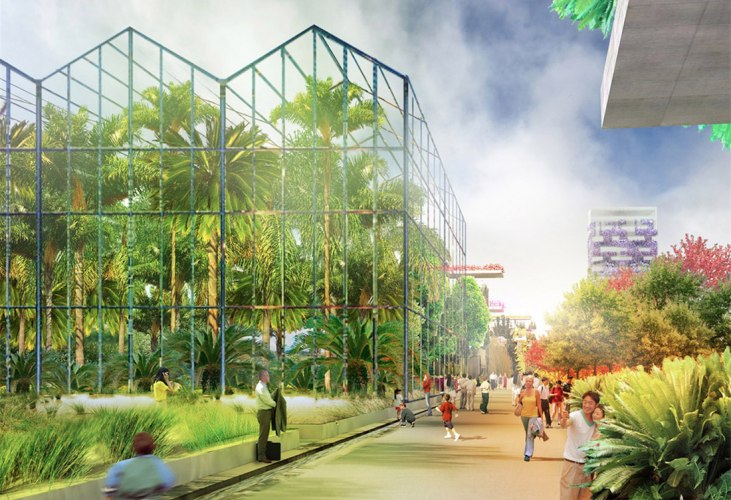 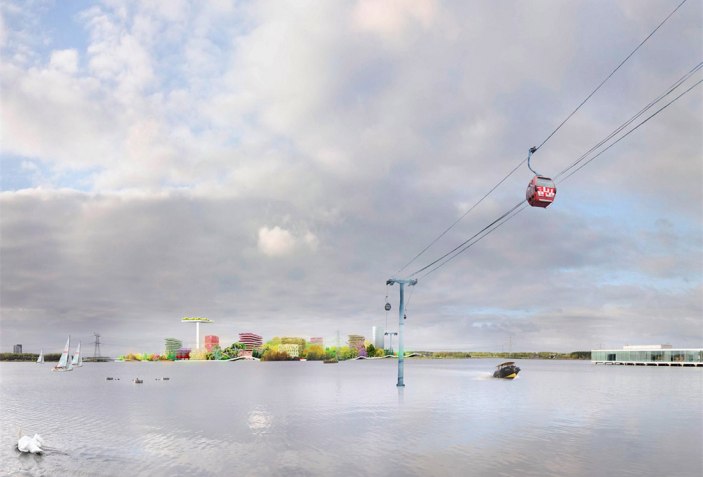 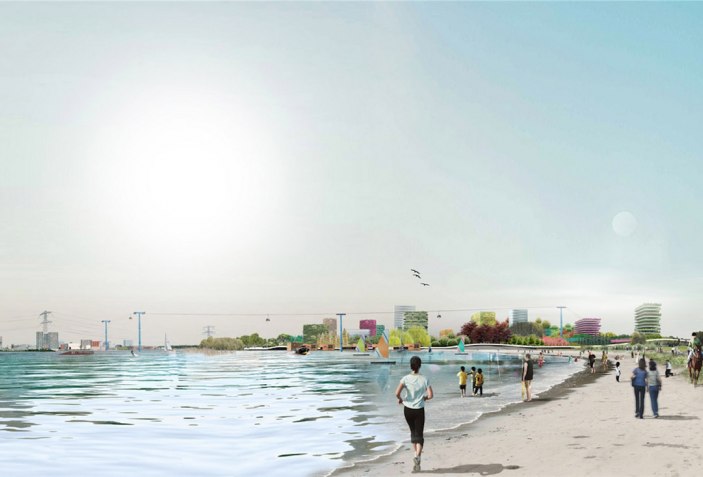 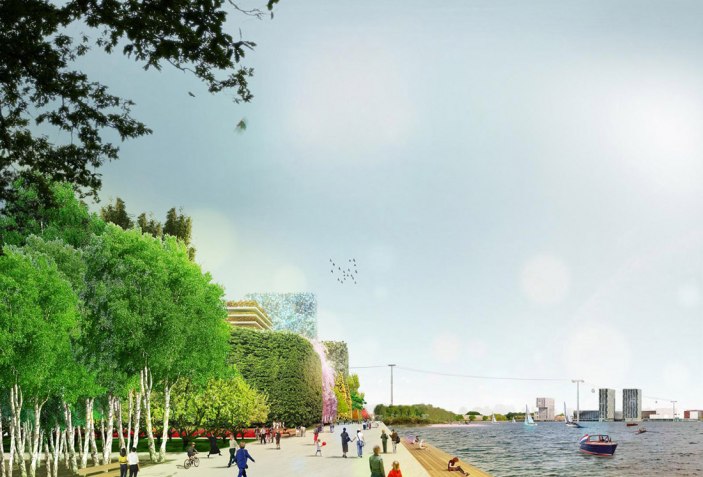 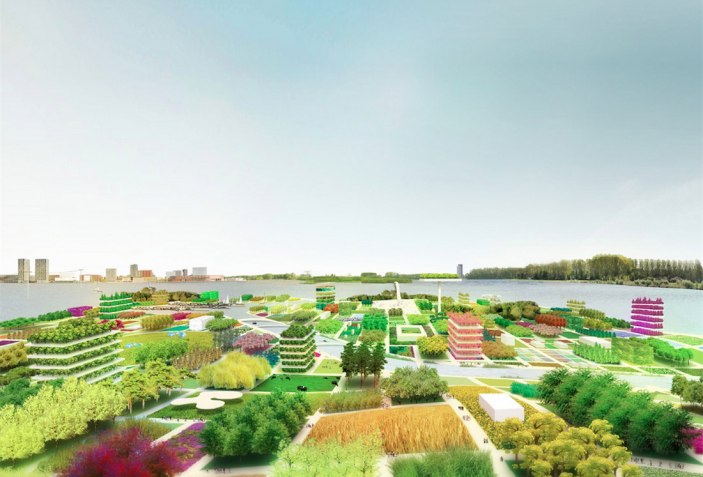 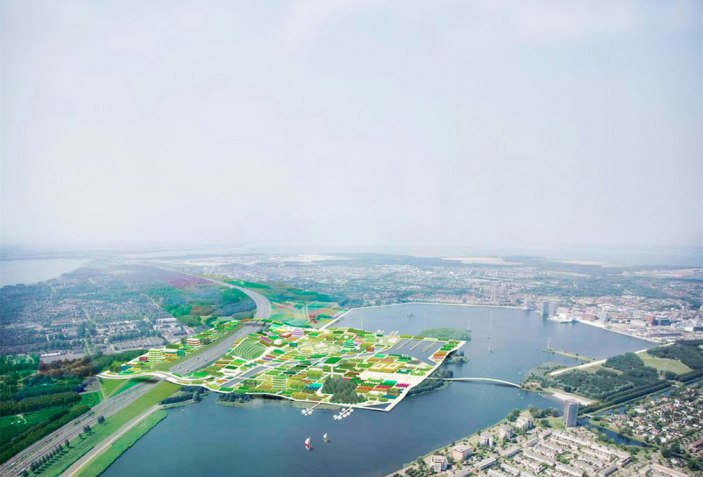 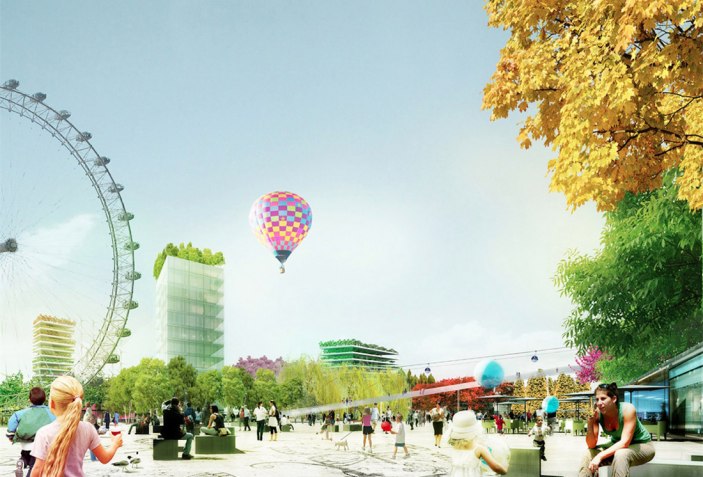 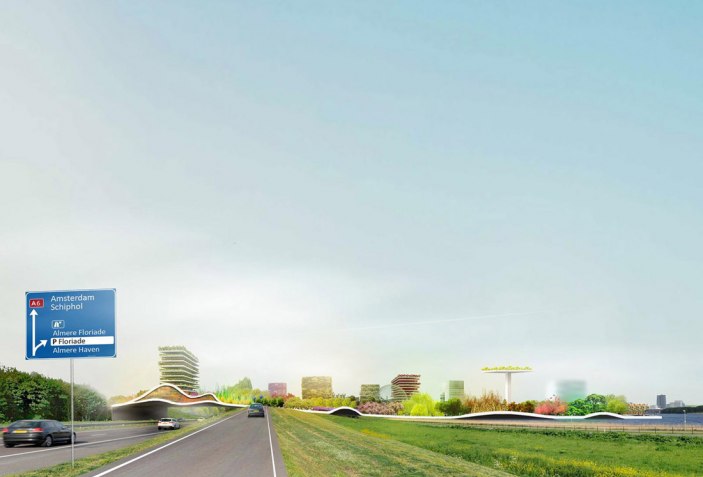 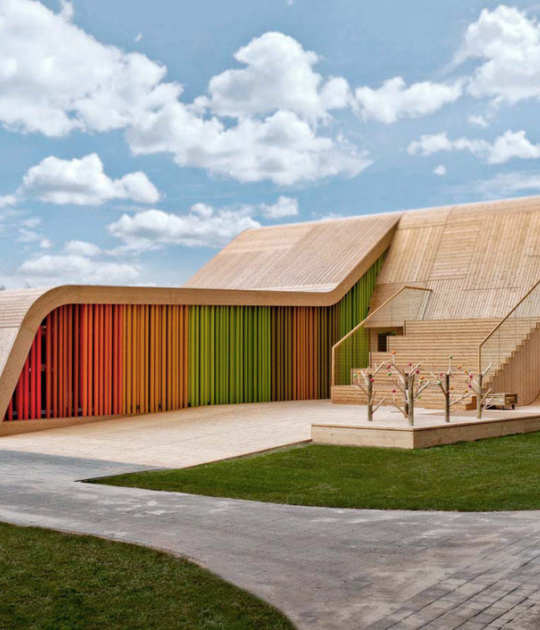