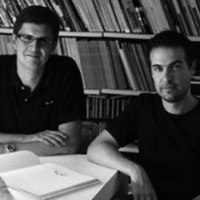 Fabrizio Barozzi born in Rovereto (Italy) in 1976. He currently lives and works in Barcelona.He graduated as an architect in 2003 by the University Institute of Architecture in Venezia. He completed his training in 1999 at the School of Architecture of Seville in 2001 while living in Paris.

He began his training partner in 2003 working as the office of William Vázquez Consuegra and later in 2004 is associated with Alberto Veiga and establish their own professional studio.

Alberto Veiga (Santiago de Compostela, Spain), was born in 1973 and studied architecture at the School of Architecture of Navarre. After graduating, he worked as an assistant and planner in Patxi Mangado practices in 1997-2001. From 2001-03, he worked as a designer of Guillermo Vázquez Consuegra, where he worked on a number of projects awarded. In 2004 he settled in EBV Architects with Fabrizio Barozzi. Projects currently teaches 3rd year at UIC.

EBV Architects is an architectural firm located in Barcelona and founded by Fabrizio Barozzi (Trento, Italy, 1976) and Alberto Veiga (Santiago, Spain, 1973) devoted to architecture, urbanism and interior design. The experience accumulated over the years in collaboration with renowned architects has allowed prestige EBV start a professional career where independent research plays a major role. The study EBV and has been awarded with many awards nationally and internationally.