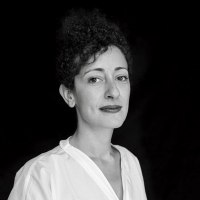 Lina Ghotmeh. Born in Beirut in 1980, she grew up in this millenary and cosmopolitan city marked by the stigmata of war. If she wanted to become an archaeologist, her studies at the Department of Architecture at the American University of Beirut, led her to question the traces, the memory, the space and the landscape differently by developing her projects with a profoundly sustainable approach. to the approach, according to its terms, of an "Archeology of the future". After graduating with the Azar and Areen awards, Lina continues her training at the Special School of Architecture in Paris where she becomes an associate professor between 2008 and 2015.

It is in London that she collaborates with Ateliers Jean Nouvel and Foster & Partners and that she wins, in 2005, the international competition of the National Estonian Museum. At this event, she co-founded the agency D.G.T Architects in Paris and leads, then with its partners Dorell and Tane, this great National Museum to its realization. Hailed unanimously by the international press and prestigiously awarded (Grand Prix Afex 2016, nominated for the Van der Rohe Award 2017), the museum has become emblematic of avant-garde architecture combining relevance and beauty of the gesture.

The approach of Lina Ghotmeh, imbued with extreme sensitivity, testifies in each of his proposals of his visionary vision and his libertarian spirit like the projects noticed: Really Masséna (winner of Réinventons Paris) or the complex of the El Khoury Stone Garden Foundation in Beirut.

With its multicultural experiences and strong involvement in the issues of his time, the architect is regularly invited to speak at conferences, juries or workshops in France and abroad. She is distinguished by several prizes including the Ajap prize in 2008, the Dejean prize from the 2016 Academy of Architecture.
By Christine Blanchet, Journalist, Art Historian
Photograph © Hannah Assouline