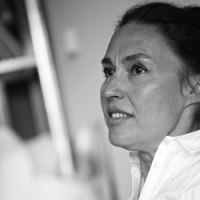 Ellen van Loon joined OMA in 1998 and has led several award-winning building projects that combine sophisticated design with precise execution. Some of her most significant contributions include the new G-Star Headquarters in Amsterdam (2014); De Rotterdam, the largest building in the Netherlands (2013); New Court, the Rothschild Bank headquarters in London (2011); exterior and interior design for Maggie's Centre near Glasgow (2011); the Prada Transformer pavilion in Seoul (2009); Casa da Musica in Porto (2005), winner of the 2007 RIBA Award; and the Dutch Embassy in Berlin (2003), winner of the European Union Mies van der Rohe award in 2005.

Van Loon is currently working on Factory, a large performing arts venue for Manchester; a new building for Brighton College in England; and the home of the Danish Architecture Center in Copenhagen.