This exhibition focuses on Alpine Architecture (1917), a Utopian project designed by architect Bruno Taut displaying his building plans for a city in the Alps. This collection comprises 36 plates which have never been shown in their entirety and which attest to the endurance and imperturbability of Utopian ideals. 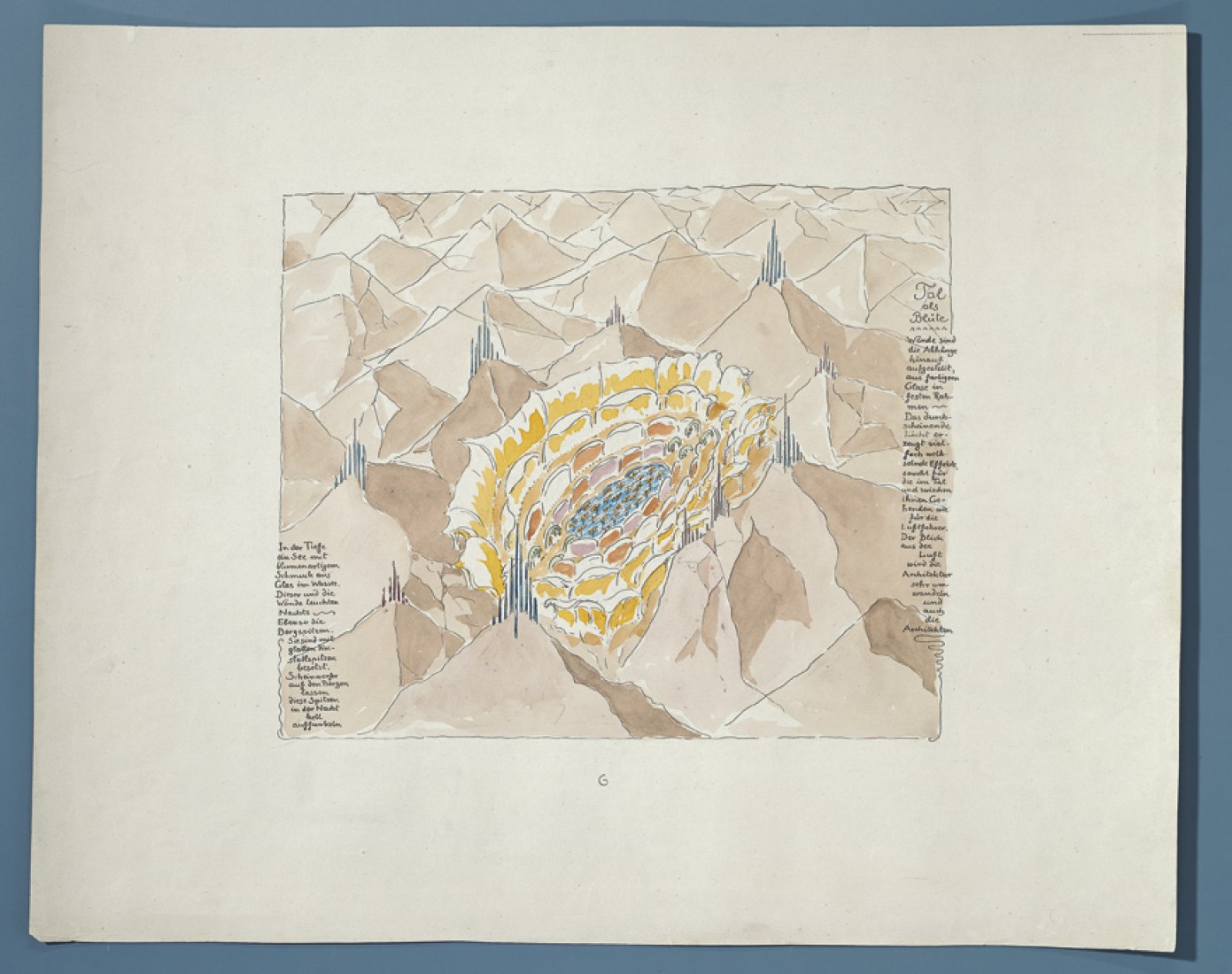 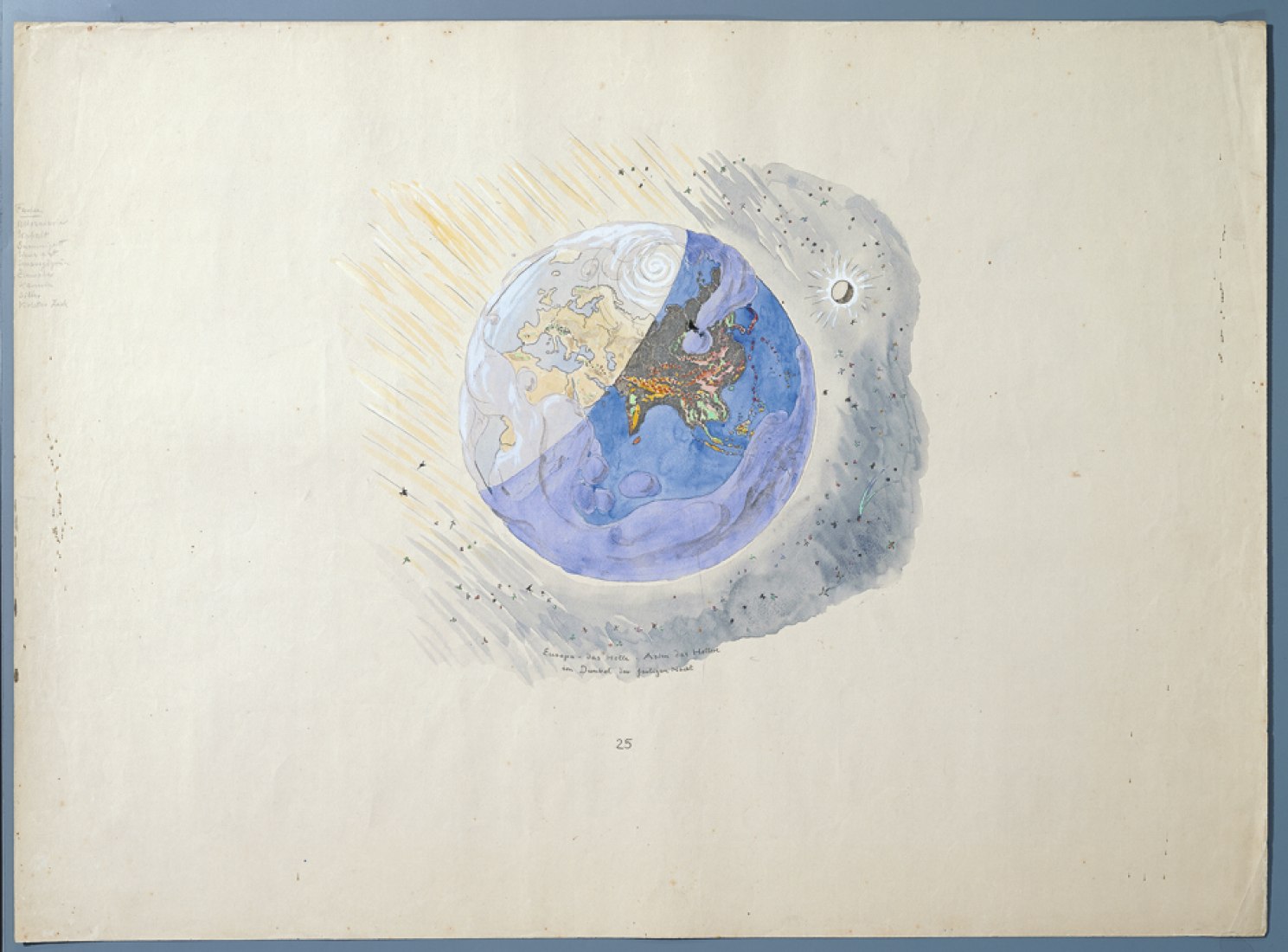 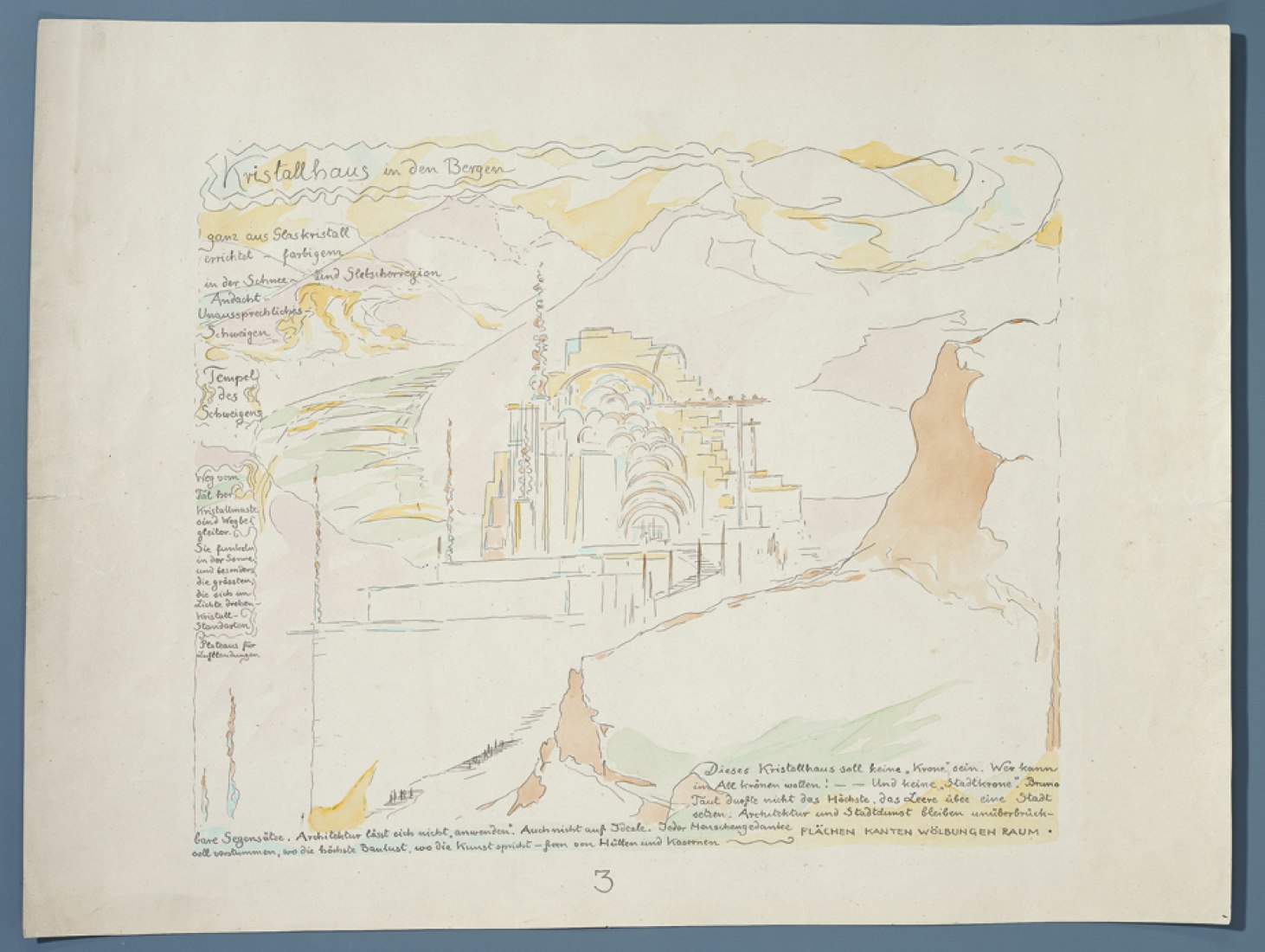 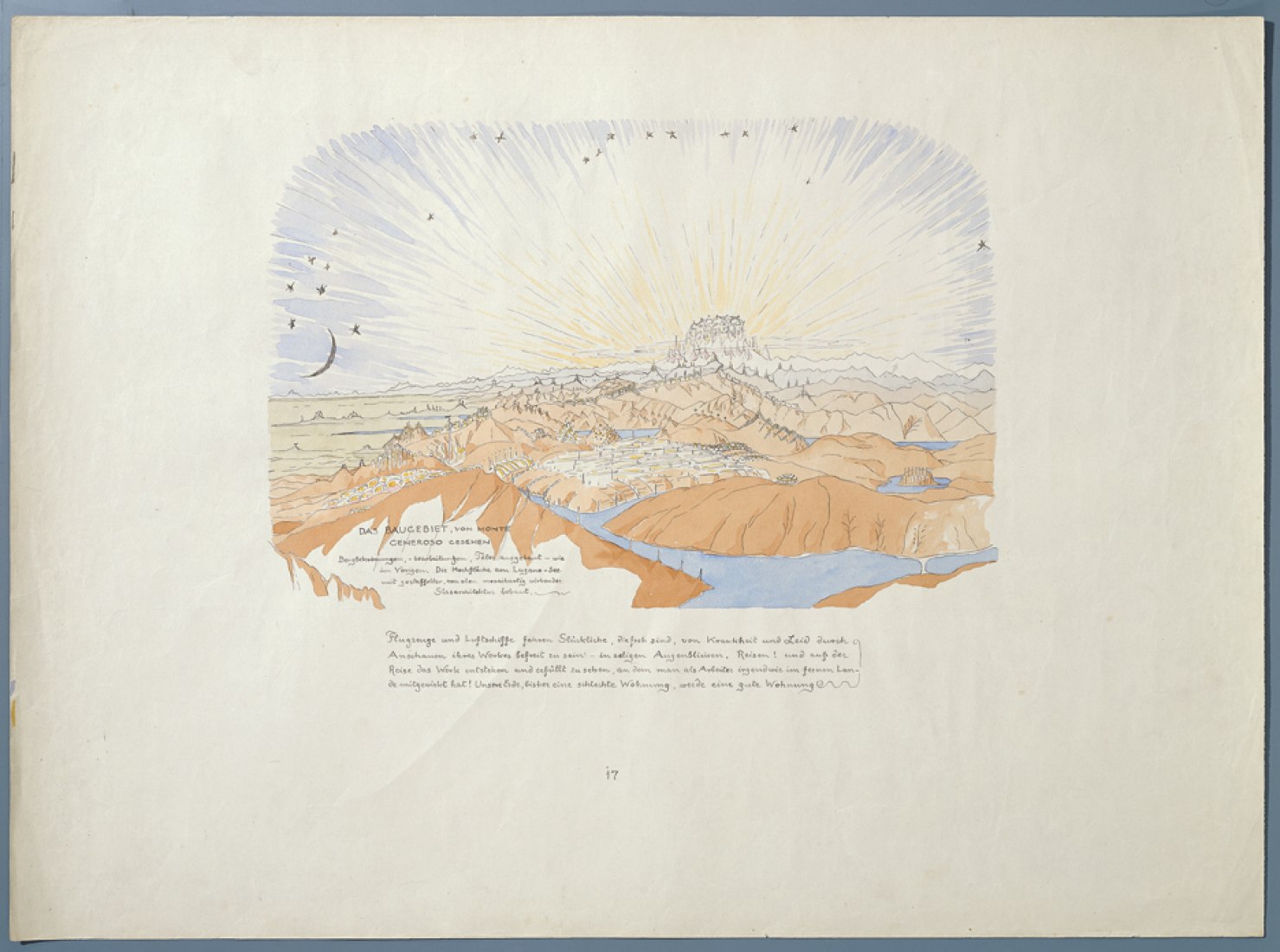 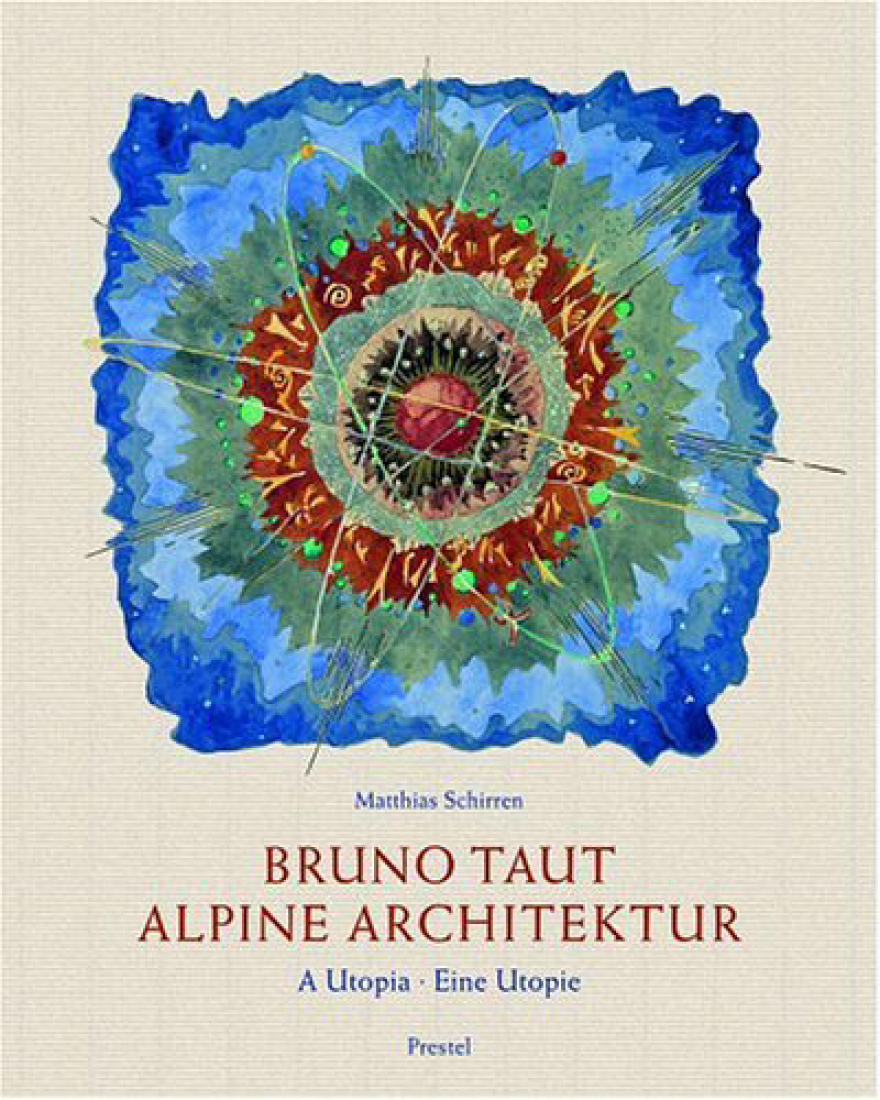 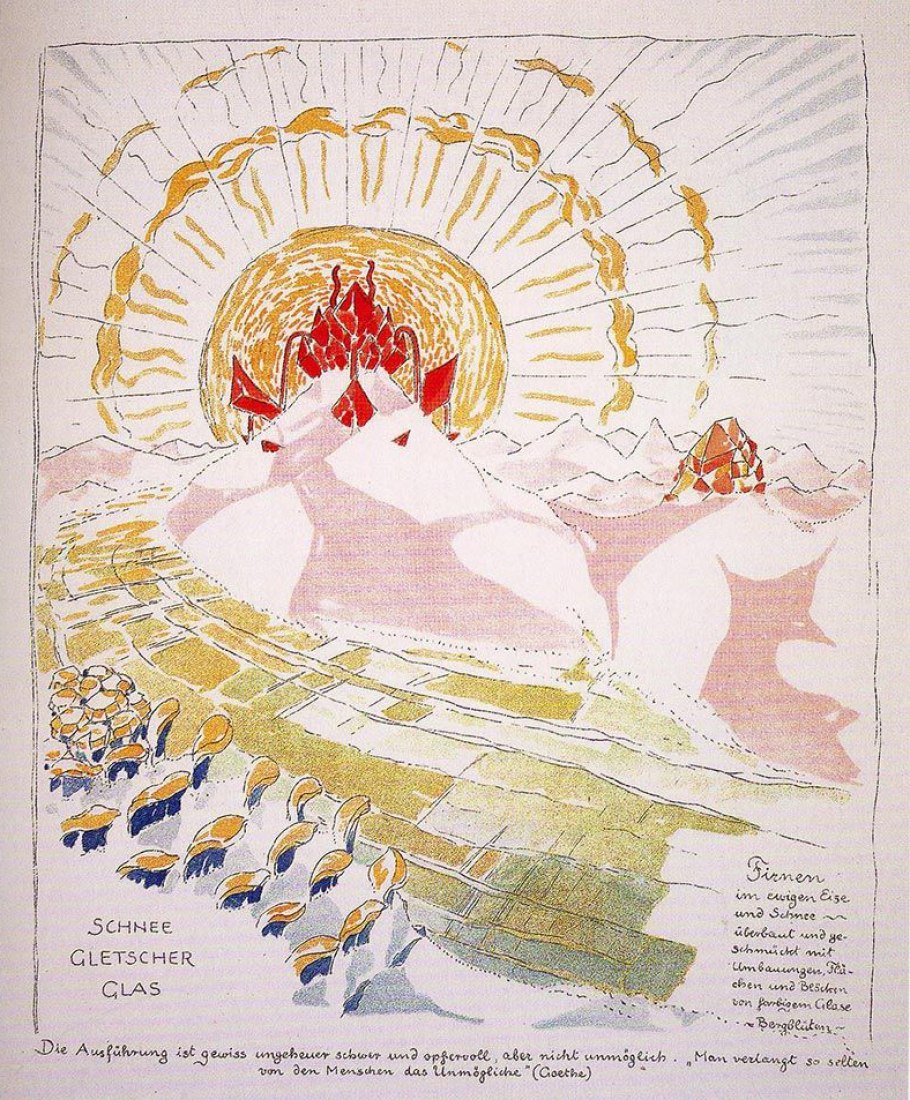 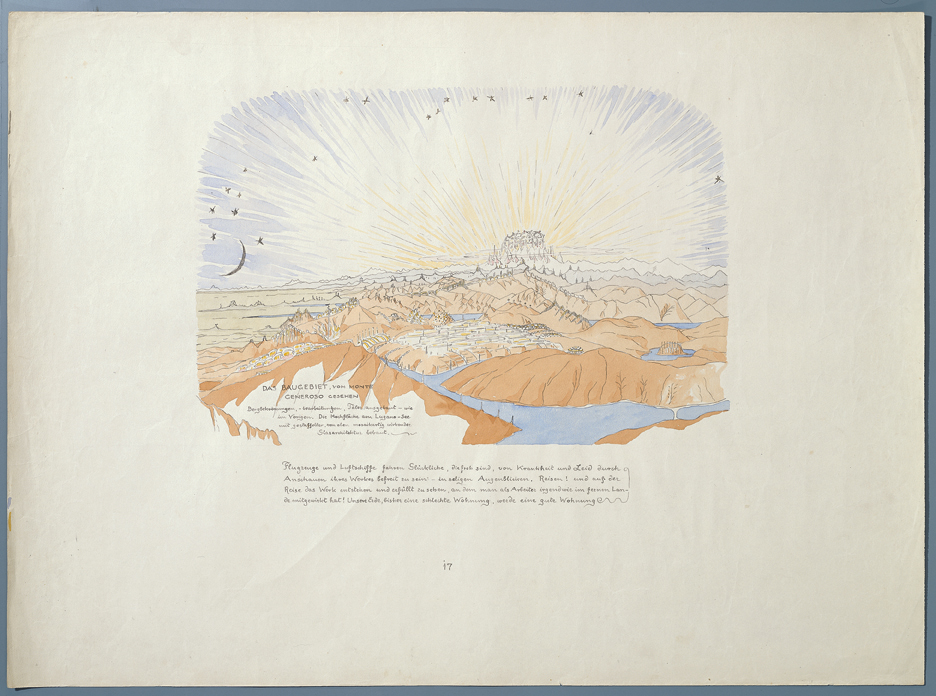 Between 1917 and 1918, in full Great War, the German architect Bruno Taut, conceived and edited Alpine Architecture, a treatise on utopian architecture developed in 30 plates. Apparently focused on the construction of an ambitious urban fabric in the Alps, the significance goes far beyond text. Aesthetic and philosophical implications are a condensed summary of the ideas pacifists, socialists and mystical Taut. The Fine Arts presents for the first time all the 30 plates that make Alpine Architecture.

Taut says in the dedication of the work to Kaiser Wilhelm II to the treaty aims to be a contribution to the Eternal Peace. The architect says that the root cause of war is boredom. To avoid this, we must propose to the people, not only German, but the whole European higher-occupation, "extra-political ... purely human and cosmic-religious": the construction of a complex urban area in the Alps, "among the Monte Rosa and the plains of northern Italy. "Taut's architectural proposals focus on an architecture made ​​only with glass. Taut had made ​​several works with these characteristics, but, above all, the glass was fascinated by architecture as a metaphor of a new life. Taut was the utopian ideas of the poet Paul Scheerbart, author of The Architecture of the glass. Scheerbart claimed: "If we raise our culture to a higher level, we are obliged ... to change our architecture. " 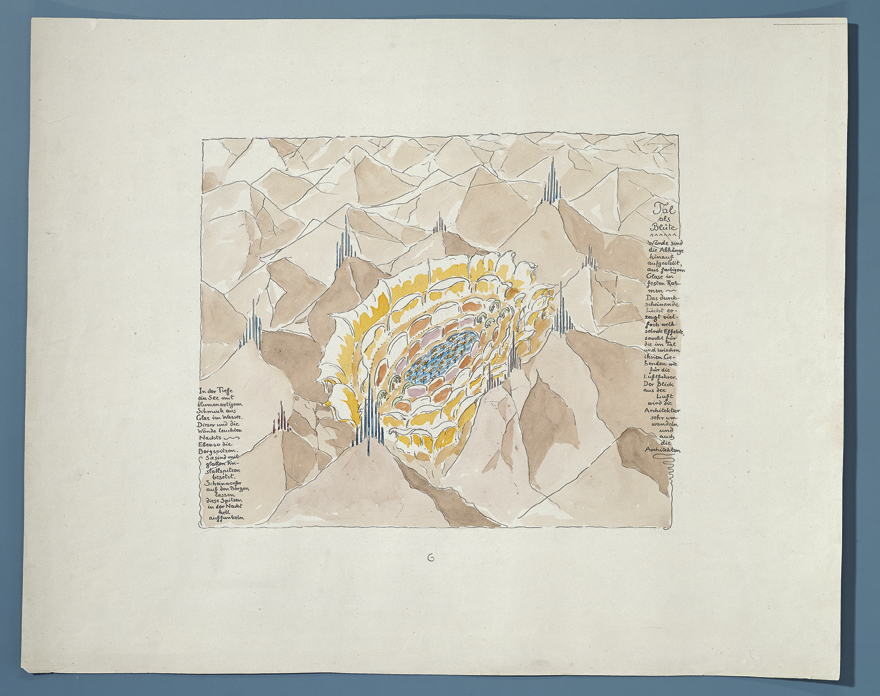 Despite its apparent simplicity (a small book consisting of 30 sheets that Abalos calls "aphorisms drawn"with no explanatory essay), Alpine Architecture involves "the creation of an incredibly well structured universe ... whose drive towards building a new notion of beauty allows him to explore almost boundless territories "if not through the visionary fantasy unfolds Taut. The exhibition of the original plates Alpine Architecture is part of the many activities that the Fine Arts devoted the last one year, the issue of (s) utopia (s) and counterutopia (s). These include the completion of the exhibition Architecture Written, Congress Utopia / counterutopia and the launch of the collection within the Area Utopias Publications CBA. 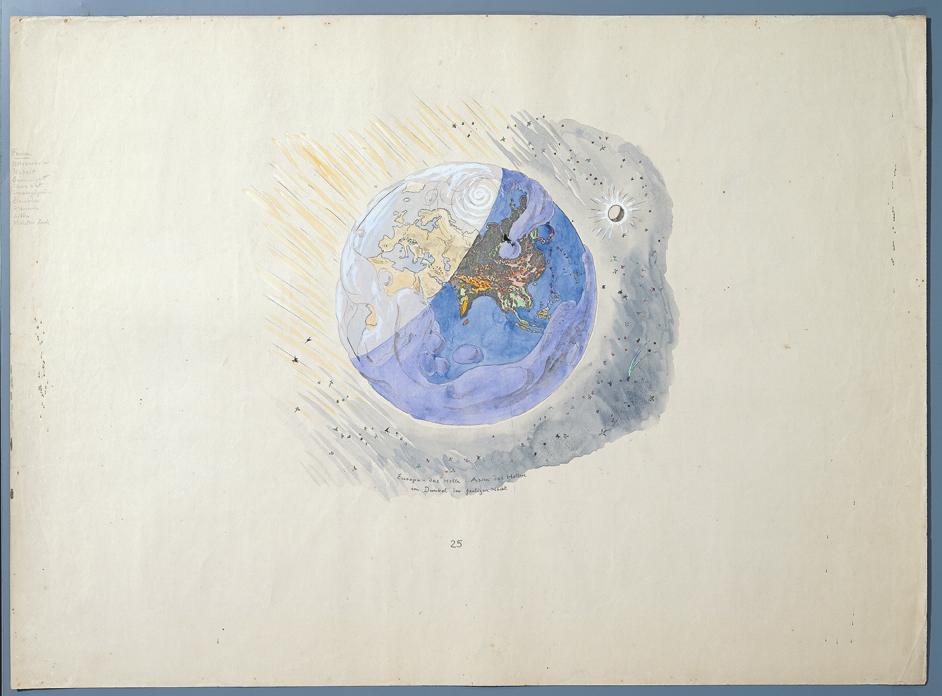 Bruno Taut (Königsberg, 1880-Ankara, 1938) was an architect and publicist. It is considered one of the most prominent representatives of German expressionist movement. Taut led a movement that wanted to reach higher levels of expression and freedom through art and architecture. Between 1921 and 1924 he served as city architect of Magdeburg. He made several functional buildings in Berlin and in 1932 moved to Moscow. Later, in Japan, came into contact with the Japan traditional art.

His most famous is the prismatic dome of the Glass Pavilion at Cologne for the Exhibition of 1914. Visionary architecture of the third millennium, his sketches for Alpine Architecture reflect a utopian vision assumed. His rejection of traditional aesthetics and character indelible left a trail of openness in the vanguard of the twentieth century. 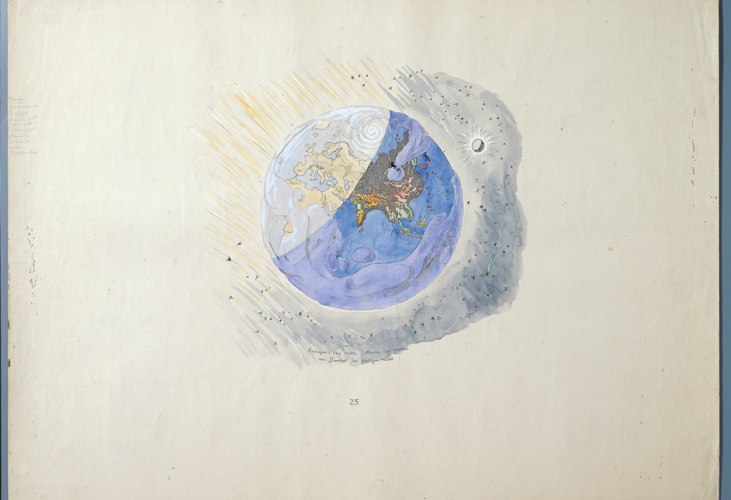 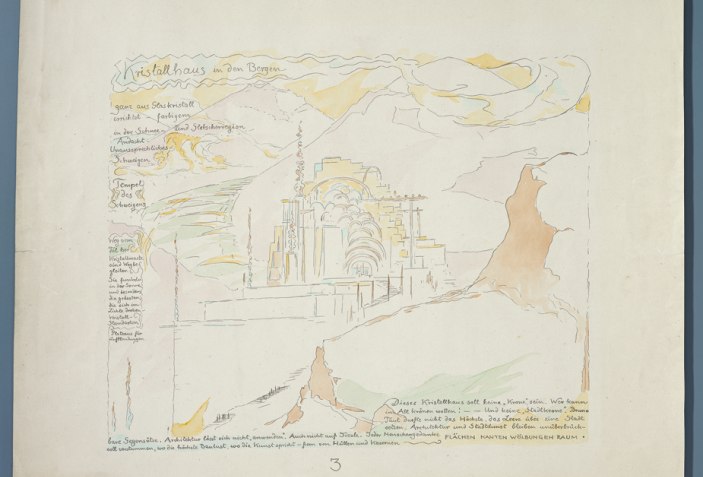 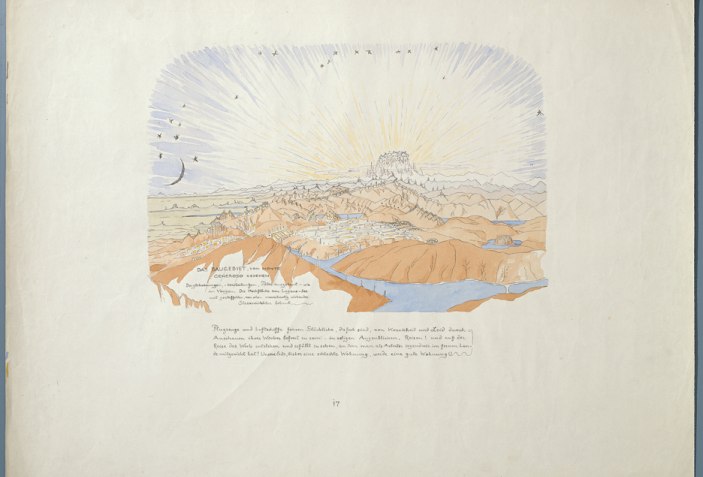 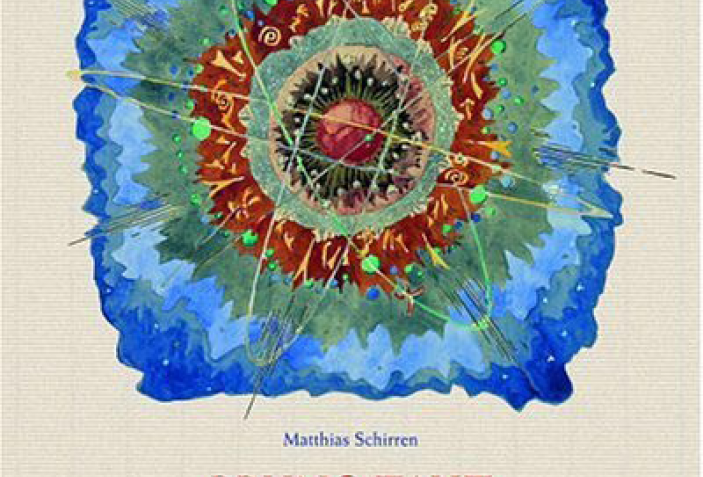 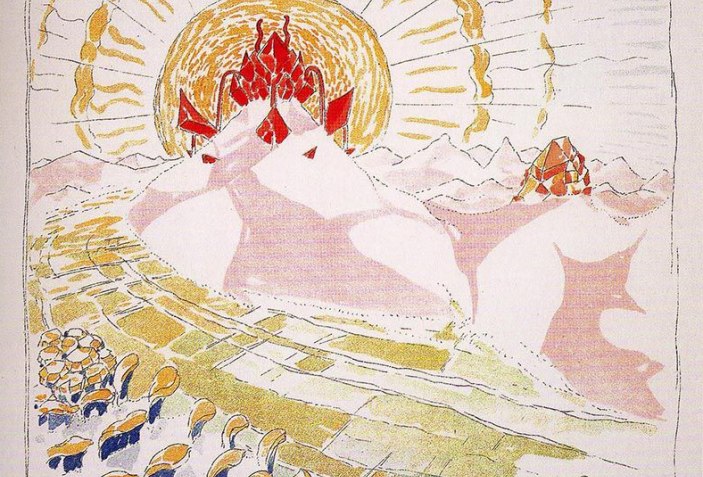 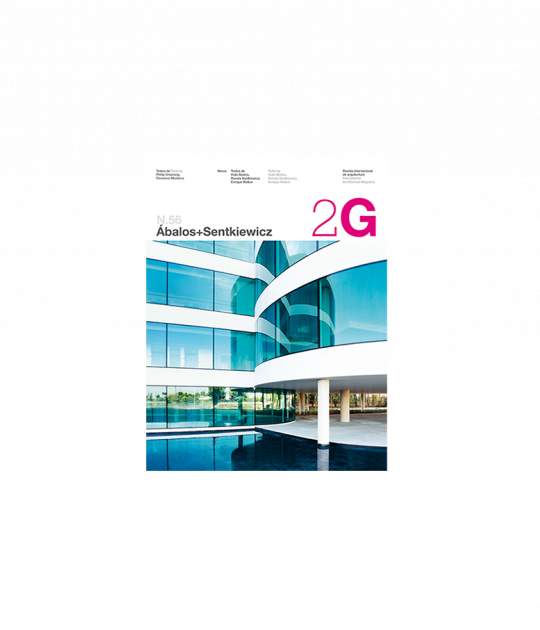 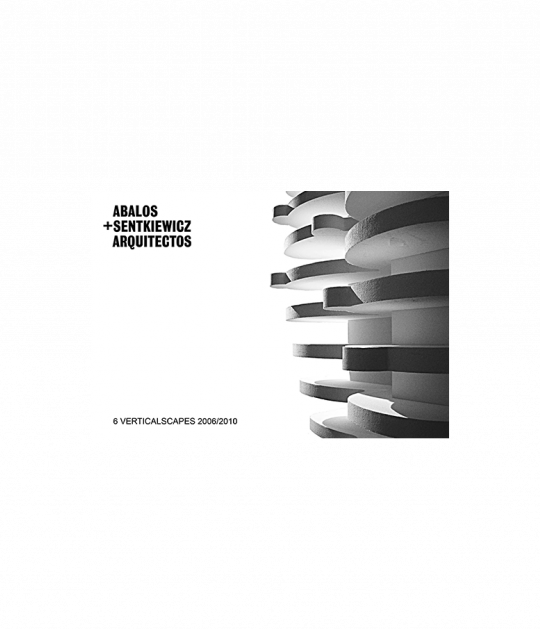 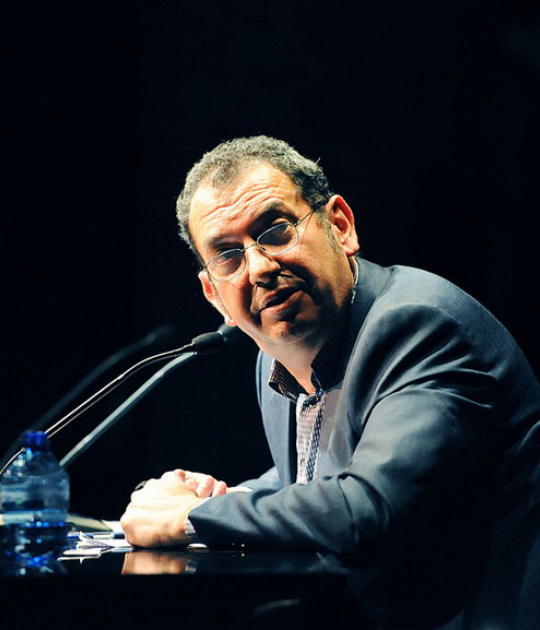 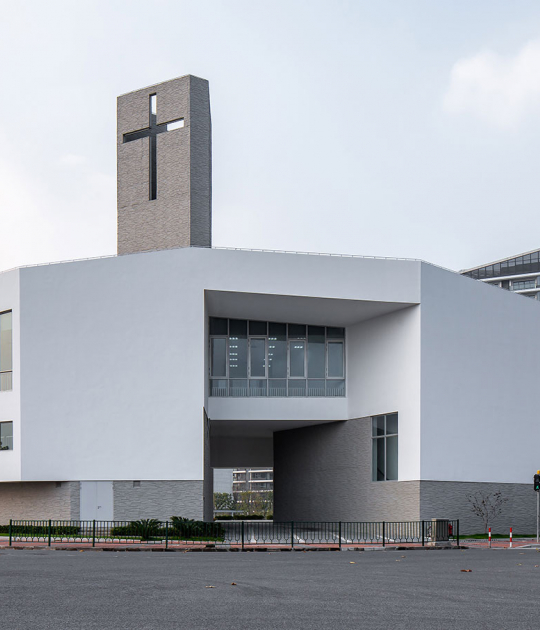