While we wait for the materialization of drMM's projection for the London Design Festival 2013, we bring you a video that shows the construction process with cross-laminated American tulipwood, and also the comments of the workers who have been involved at some point of this process. 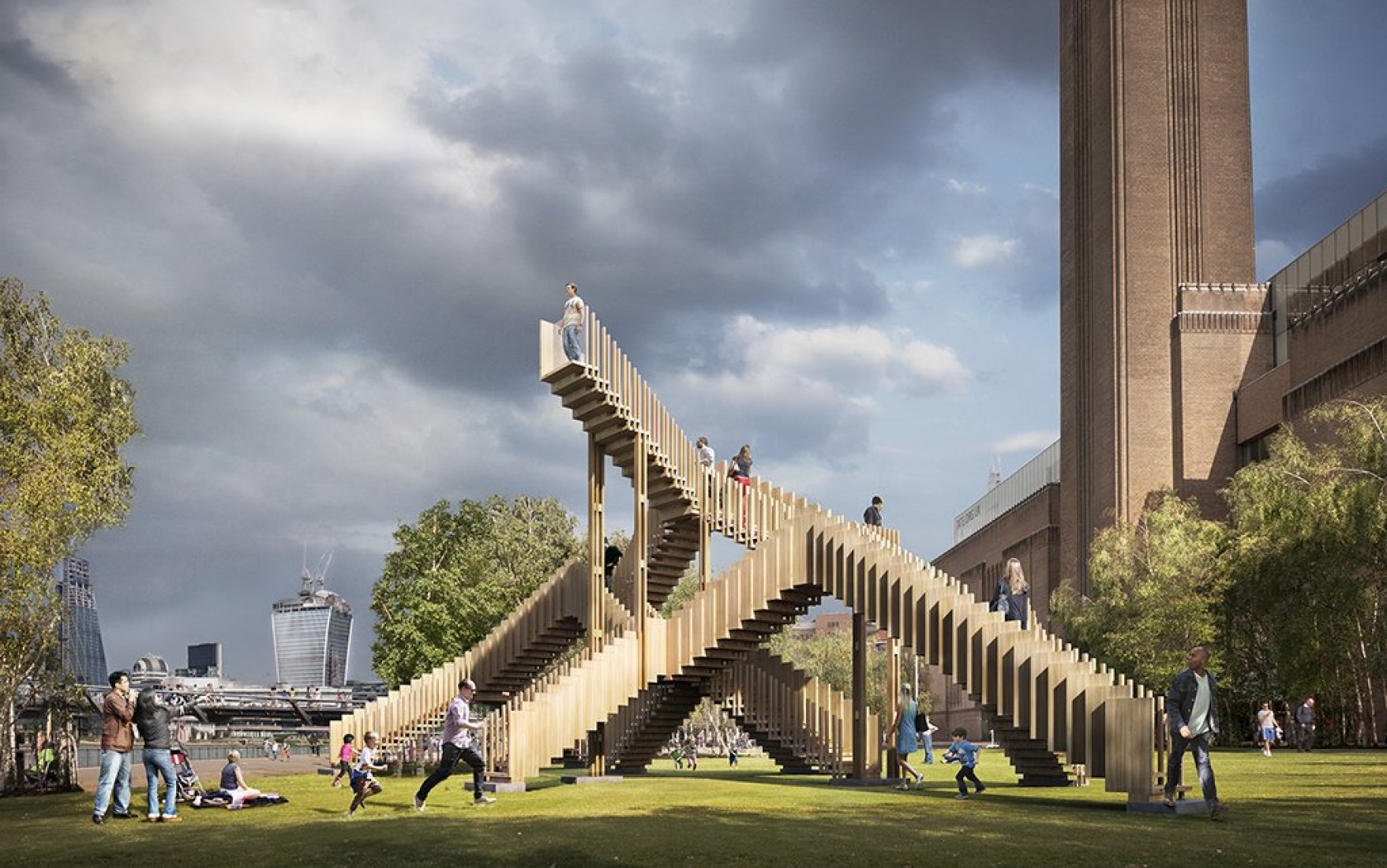 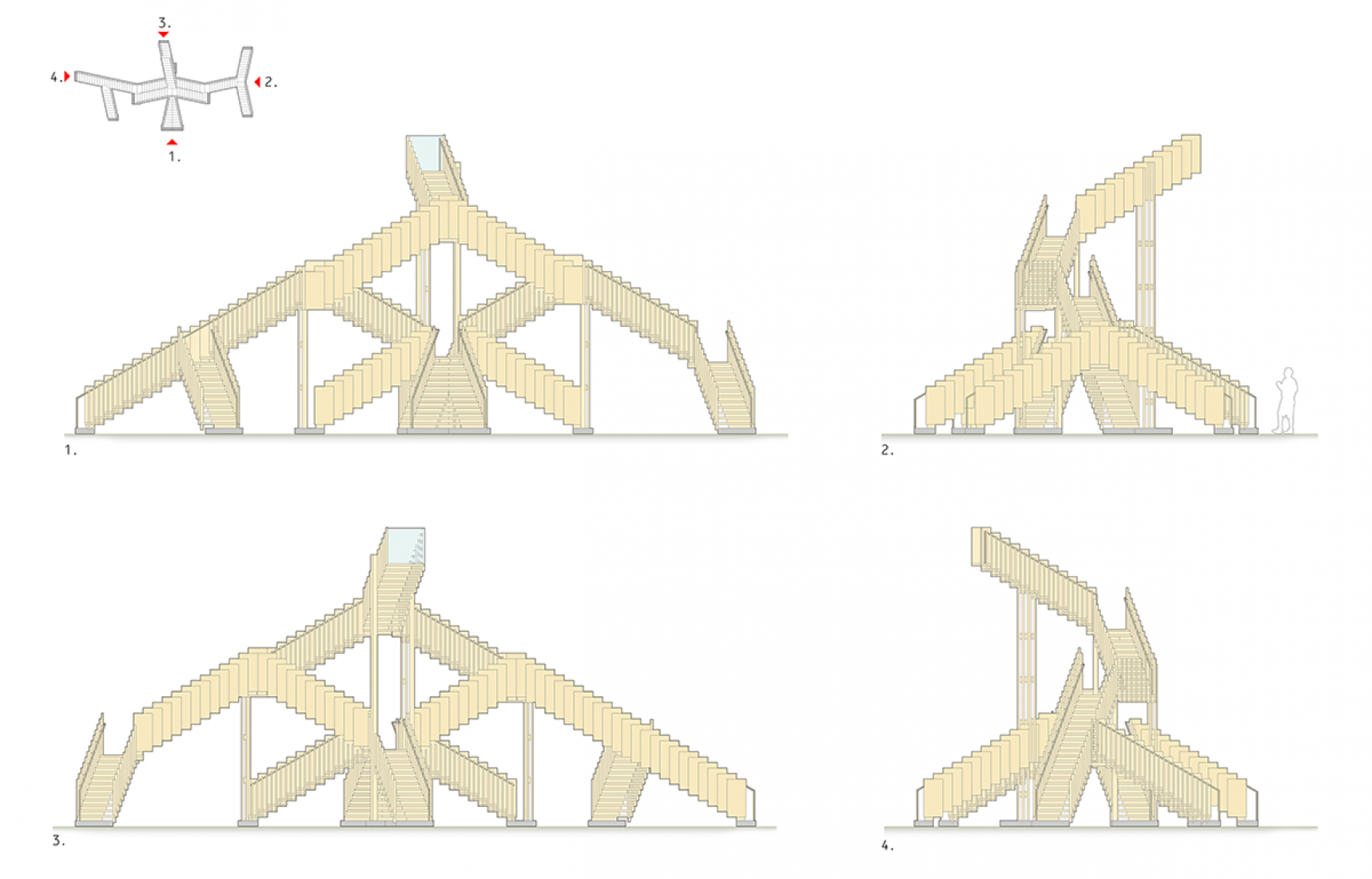 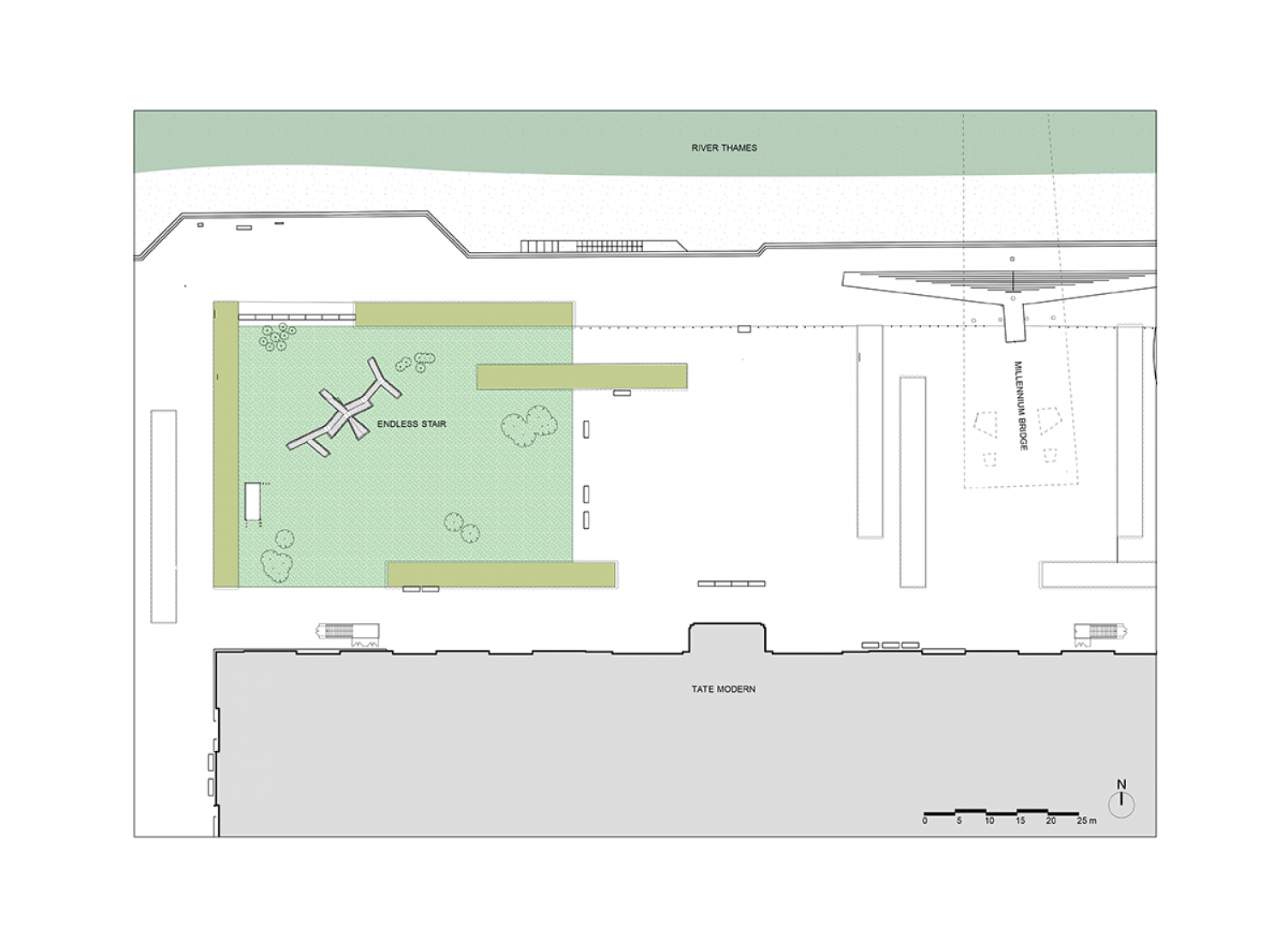 "Endless Stair" consists on a series of interlocking timber staircases rising to a height of several storeys. Alex de Rijke, architect at drMM, defines them as “a three-dimensional exercise in composition, structure and scale”.

The installation will be exhibited and available for the public to experience from September 13th to October 10th outside St Paul’s Cathedral, overlooking the Millennium Bridge and across to Tate Modern. 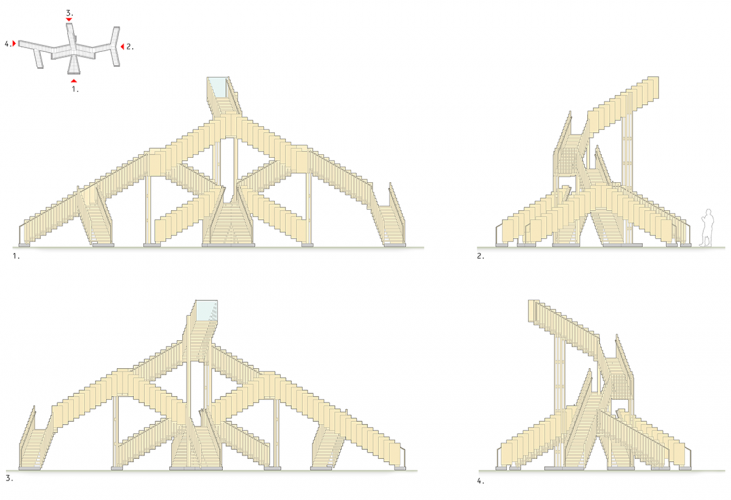 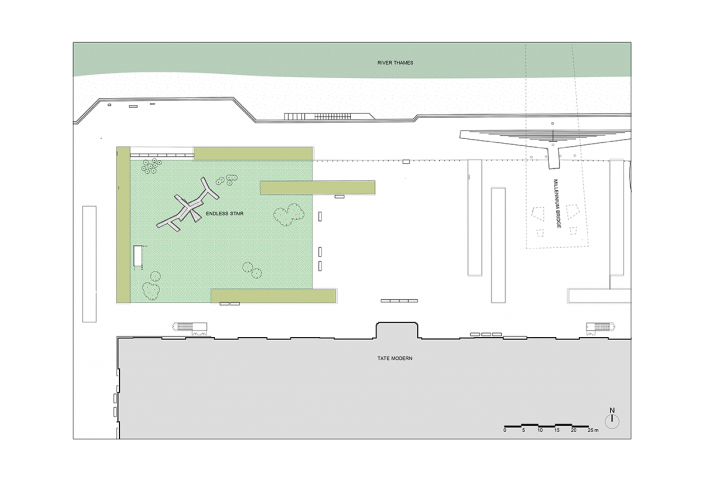 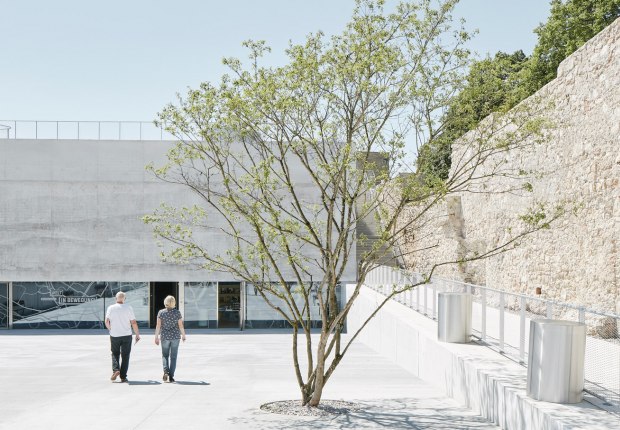 Of bullets, culture and other ammunition. New Gallery and Casemates by Bevk Perović Arhitekti 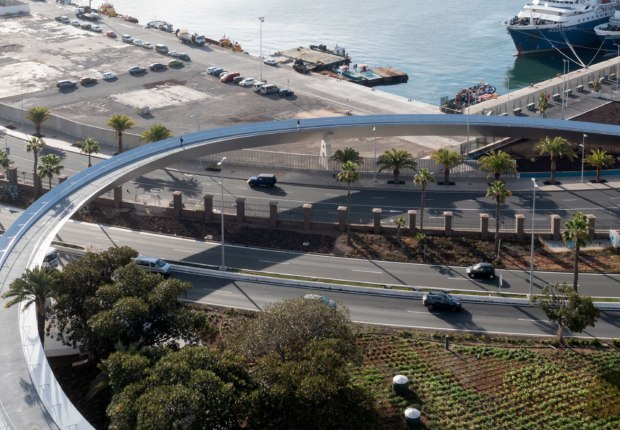 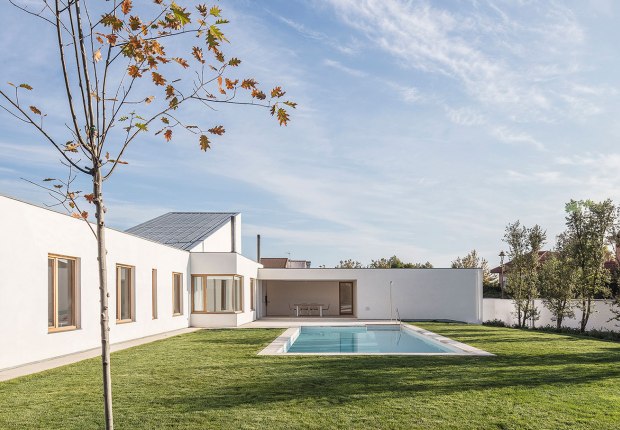 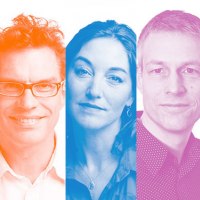 dRMM Architects. Alex de Rijke. Director. BA, MA (RCA), Dip Arch. UK/NL. Alex de Rijke is a founding Director of dRMM, having established the practice in 1995 with Philip Marsh and Sadie Morgan. He is a design champion at dRMM, responsible for the concept, construction and delivery of our timber projects. These include such diverse projects as Sliding House, Kingsdale School, Charlton WorkStack, Tower of Love, Endless Stair, Hastings Pier, WoodBlock House and Maggie’s Oldham.

Alex conducts ongoing research into contemporary materials, technologies and methods of construction. In 2006 he wrote, ‘Timber is the new Concrete’, and introduced cross-laminated timber to the UK with groundbreaking prefabricated buildings, Kingsdale School Sports Hall in London, and the Naked House prototype exhibited in Oslo. Through Alex’s leadership, dRMM has become recognised as a pioneer and authority on engineered timber design and construction, especially CLT (cross-laminated timber).

In 2013 de Rijke, alongside AHEC and ARUP, invented the first cross-laminated timber made from a hardwood and in the form of Endless Stair demonstrated its incomparable beauty, strength and sustainability in the LDF 2013 installation at Tate Modern. In summer 2017, construction will complete on dRMM’s Maggie’s cancer care centre in Oldham. A building that demonstrates a synthesis of concept, construction and user well-being; it is made entirely from tulipwood CLT and glass. The project reveals Alex’s total design ethos in its integration of landscape, architecture, furniture and art.

Prof.de Rijke advocates learning through experimentation and making, and his extensive experience includes teaching, lecturing and examining at many european schools of Architecture. From 2011-2015 he was Professor of the Masters programme and Dean of Architecture at the Royal College of Art. Alex is currently an External Examiner to the Design & Make timber programme at the Architectural Association, and a Visiting Professor to the Royal College of Art, London. He lectures internationally, presenting dRMM’s work from Scandinavia and Europe to Asia and Australasia. He has given conference papers on a range of themes including: engineered timber architecture and construction; prefabricated and mobile architecture; and the relationship between architecture and health.

Under Richard Roger’s former chairmanship, Alex de Rijke was a member of the Design for London Advisory Panel, and continues to contribute to design discussions at institutions such as the RIBA, ARCAM (Architecture Centre Amsterdam) and the Milan Salone del Mobile. Alex represents dRMM and the wider profession in the media through radio, TV appearances, and features in publications such as The Plan, Architectural Review, Dezeen and The Guardian.

With a parallel passion as photographer, Alex photographs for publications and exhibitions, including the Venice Biennale 2008 and 2012, and documents dRMM’s projects on an ongoing basis.

Sadie Morgan. Director. BA (Hons), MA (RCA), FRSA. UK. Sadie is a Founding Director of dRMM and industry leader. Her steadfast belief in the importance of design that connects back to people and place is a central influence in our practice. Over her 20-year career Sadie has had an increasingly significant role in the advocacy of design and architecture through her professional practice and her advisory roles.

Sadie reports directly to the Secretary of State as Chair of the Independent Design Panel for High Speed Two. She is a commissioner for both the National Infrastructure Commission led by former Cabinet Minister Lord Adonis, and Lord Heseltine’s Thames Estuary 2050 Growth Commission. Sadie has been appointed as a Professor at the University of Westminster, London and was awarded an honorary doctorate from the London South Bank University in 2016.

She lectures internationally on the importance of design, architecture and infrastructure, and sits on various competition juries and advisory panels including the RIBA National Awards Advisory panel and the World Architecture Festival super jury. As a media commentator she appears on TV and radio, and writes regular columns for publications such as Building magazine and the Estates Gazette.

Sadie has won the 2016 Building Magazine Personality of the Year Award and the 2015 CBI First Woman Award in recognition of her outstanding contribution to the built environment, and she was shortlisted for the 2015 AJ Woman Architect of the Year award. She became the youngest and third ever-female President of the Architectural Association in 2013.

Aspects of Sadie’s design thinking can be found throughout dRMM’s projects, from the Stirling Prize shortlisted Trafalgar Place and Clapham Manor Primary School, to the Athlete’s Village for the London Olympic Games and Faraday House at the Battersea Power Station.

Philip Marsh. Director. BA, Dip Arch (UCL), RIBA. UK. Founding Director of dRMM, Philip has been central to dRMM’s education projects. He was project architect for the remodelling of Kingsdale School, an acclaimed project that addressed student morale and education standards through the radical transformation of the learning environment. This experience was distilled into Dura, dRMM’s Exemplar School for the DfES. He was project architect for Clapham Manor Primary School, shortlisted for the 2010 Stirling Prize and in 2013 completed 4 Dwellings a 2FE Primary School for Birmingham City Council. Current projects include a new campus for Exeter Royal Academy for Deaf Education.

Philip was the architect for the Elephant & Castle Regeneration pilot, Wansey St, a mixed tenure scheme for which dRMM were awarded BD Public Housing Architect of the Year 2006. Additionally, he co-designed the recently completed sister project Harper Square, for Family Mosaic shortlisted for the NLA 2013 award for housing.

Philip has designed ArtHouse for Argent, the first private housing scheme delivered at Kings Cross Central completed 3Q 2013. He is currently working on Faraday House, phase one of Battersea Power Station, a project which has been described by David Cameron as “jewel in the crown” of regeneration projects in London. 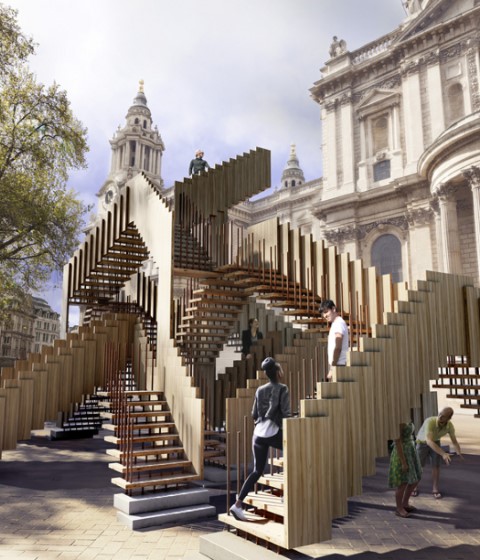 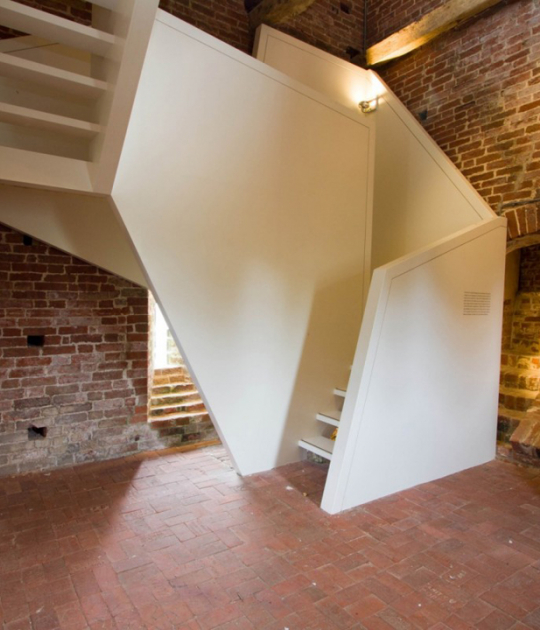 Staircase of Tower of Uitwierde by Onix 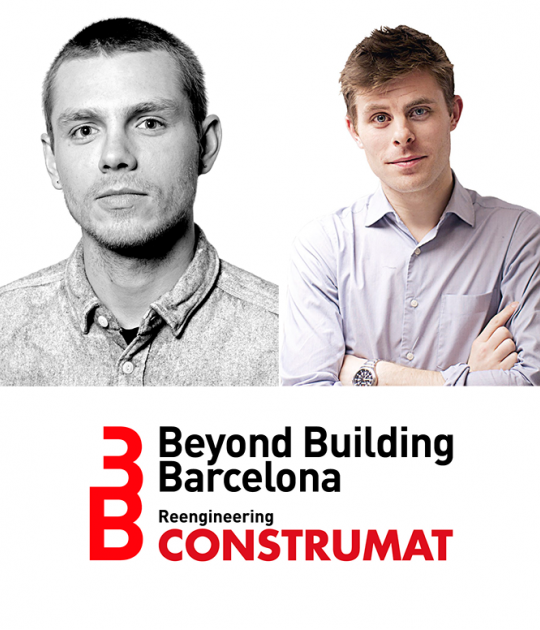 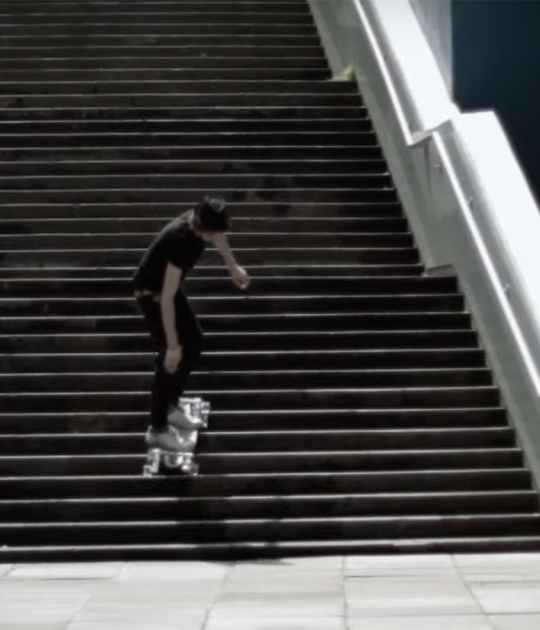 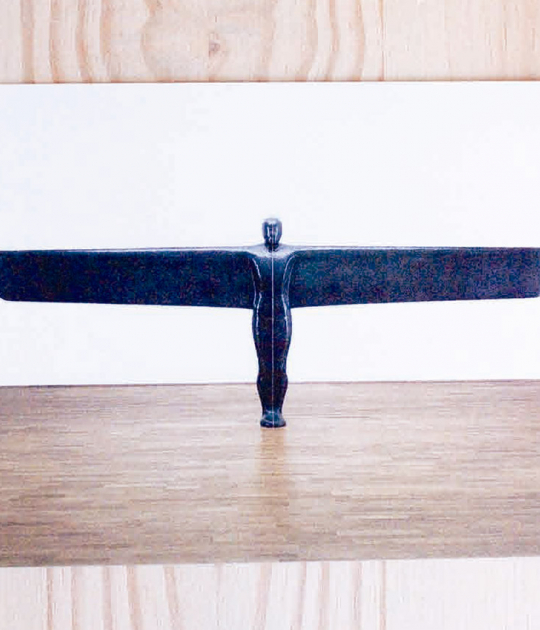