Diller Scofidio + Renfro (DS+R)'s scenography design for "Cartier and Islamic Art: In Search of Modernity" at the Musée des Arts Décoratifs in Paris is in its final 10 days after four month installation, closing February 20, 2022 before traveling to the Dallas Museum of Art from May 14 to September 18, 2022.

DS+R was fascinated with the way Cartier’s designers translated two-dimensional geometric patterns inspired by Islamic references into carefully engineered artifacts that could respond to gravity and the organic surface of the body. 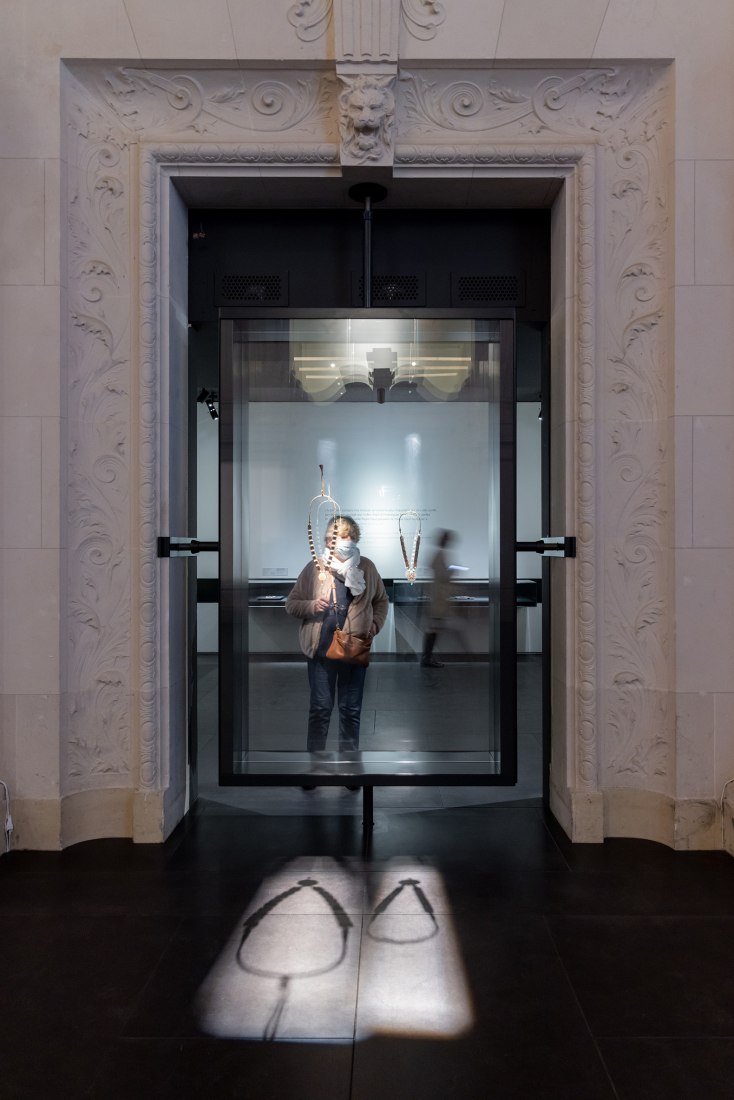 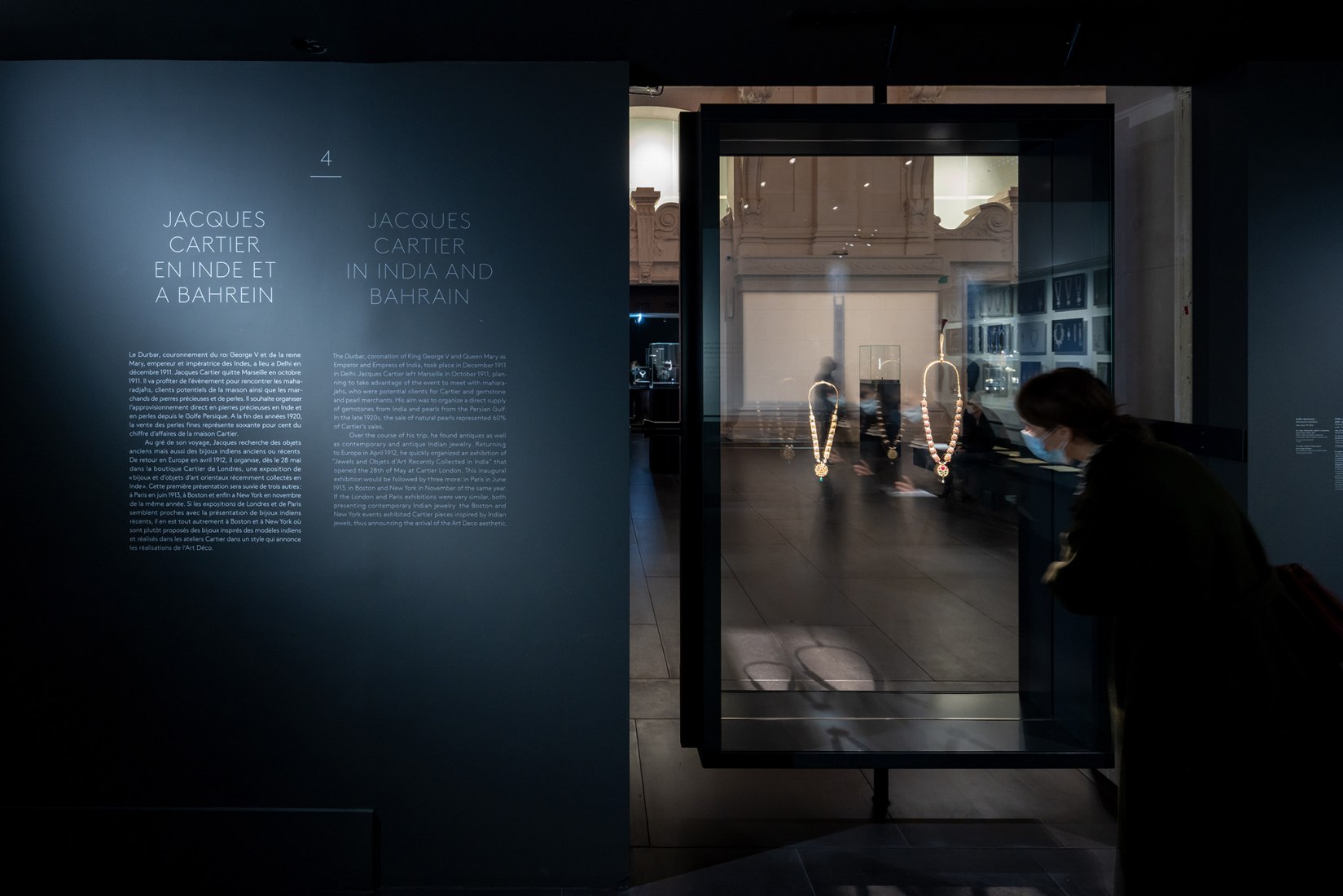 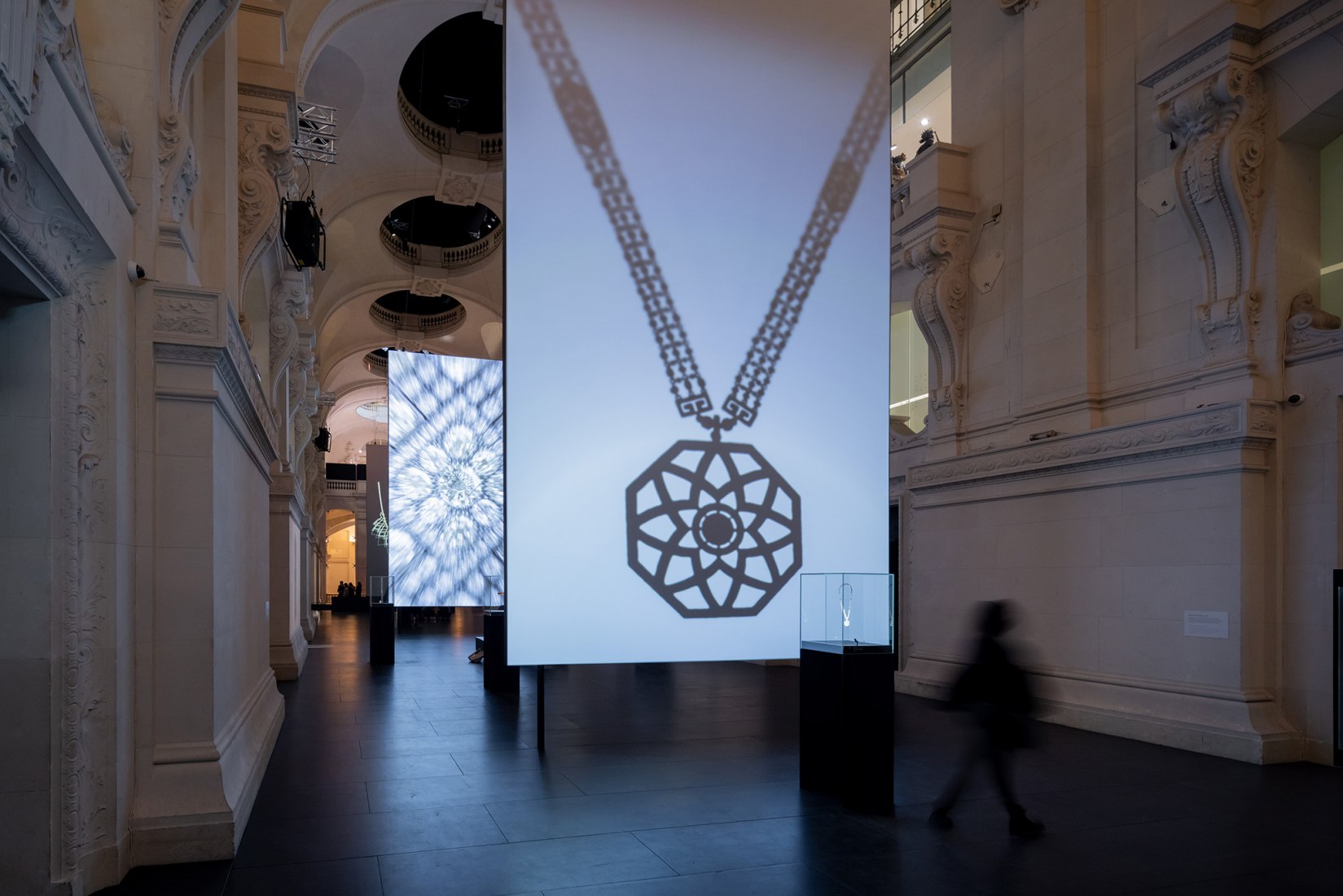 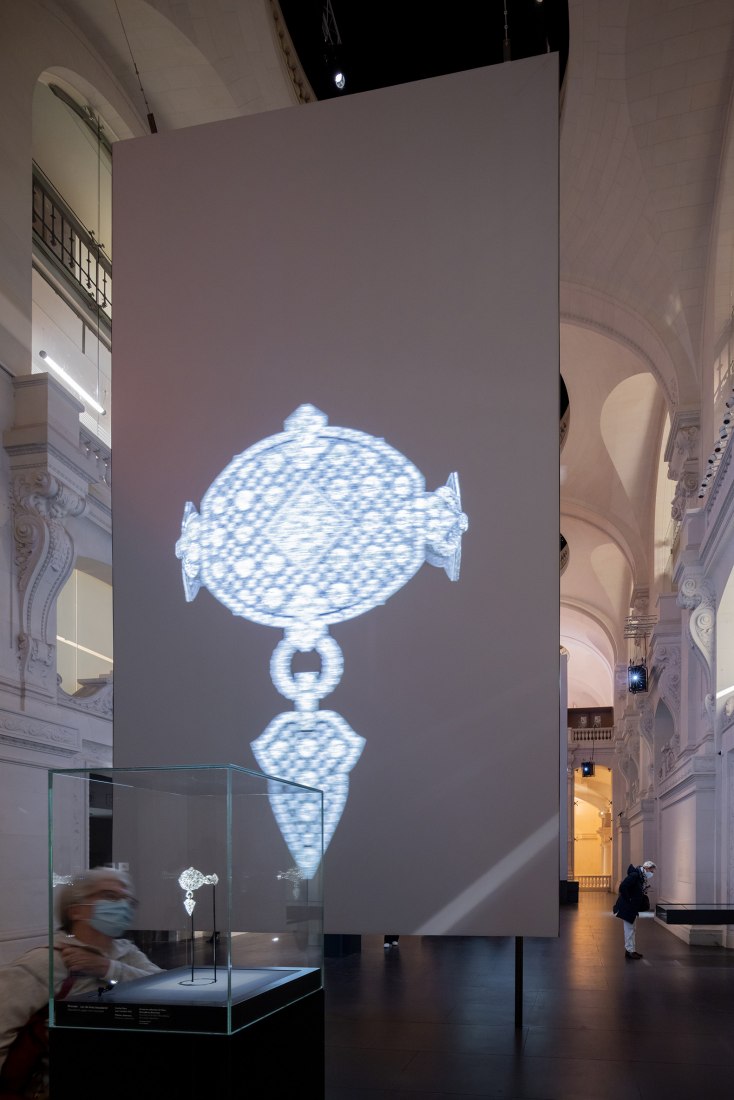 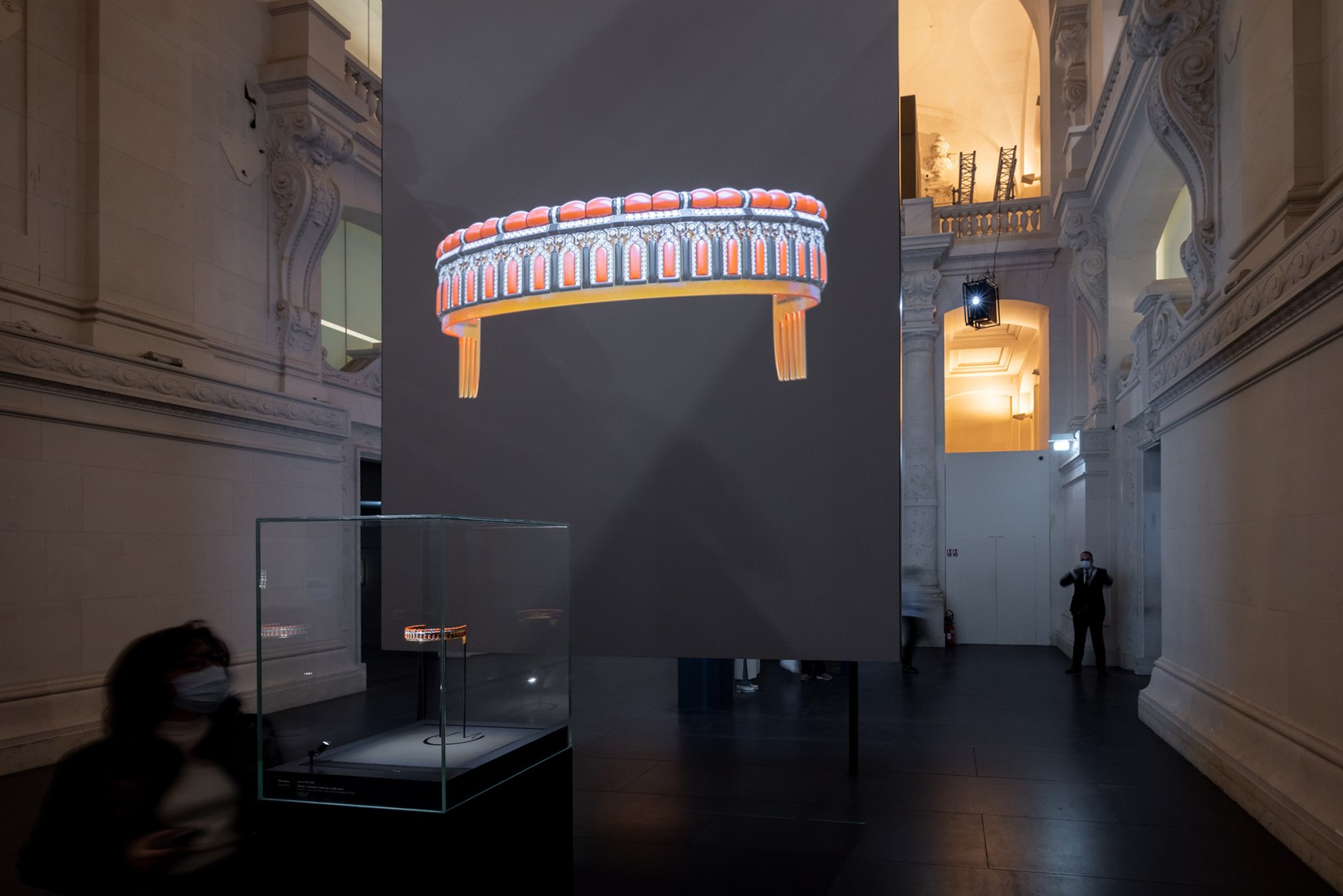 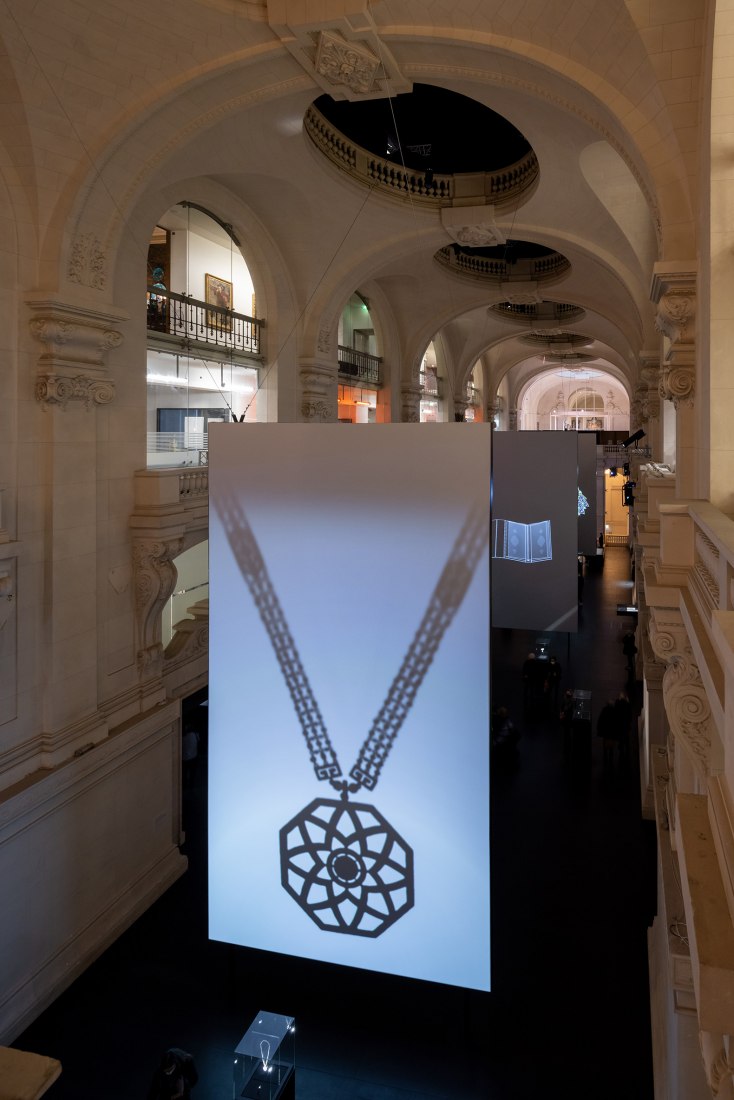 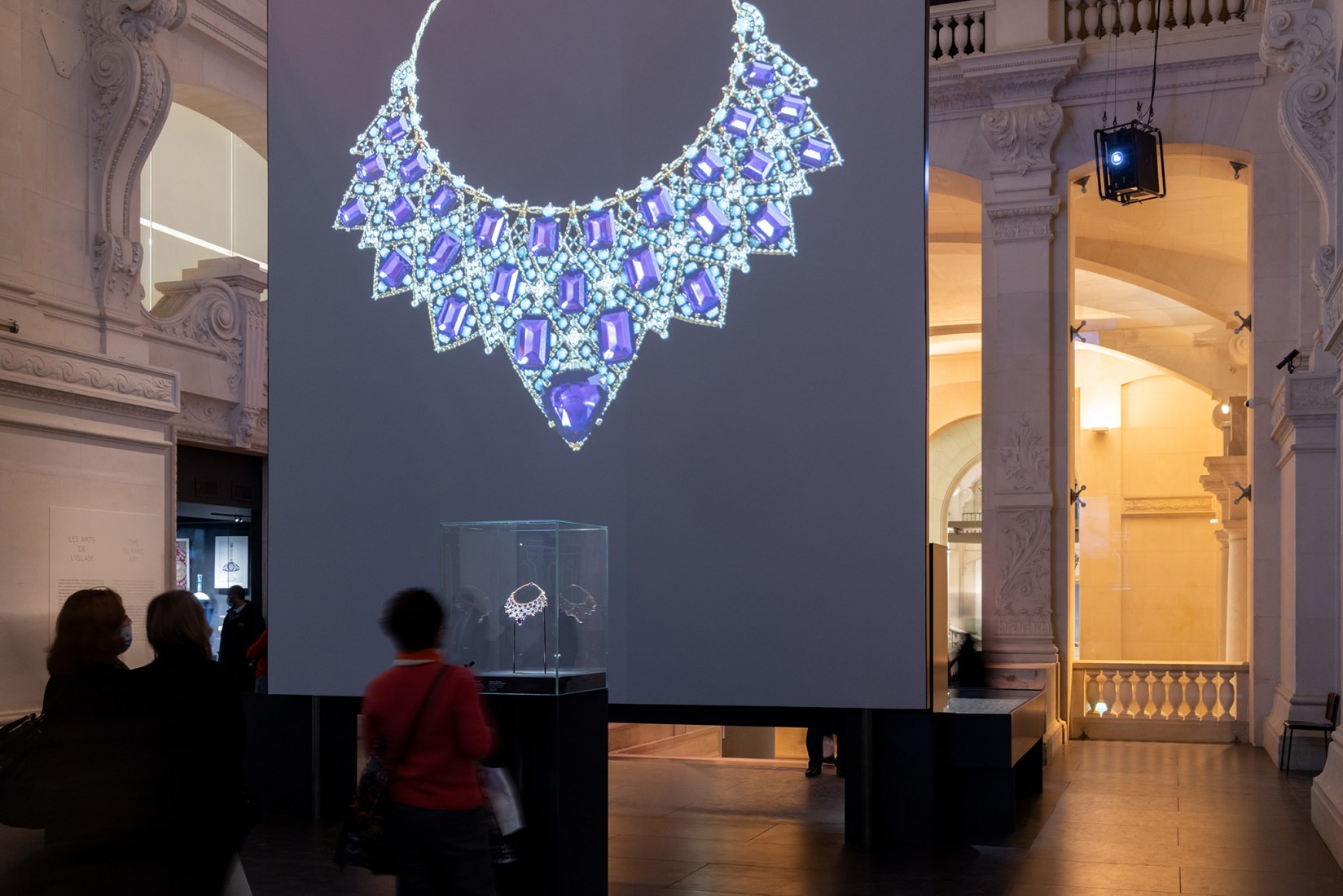 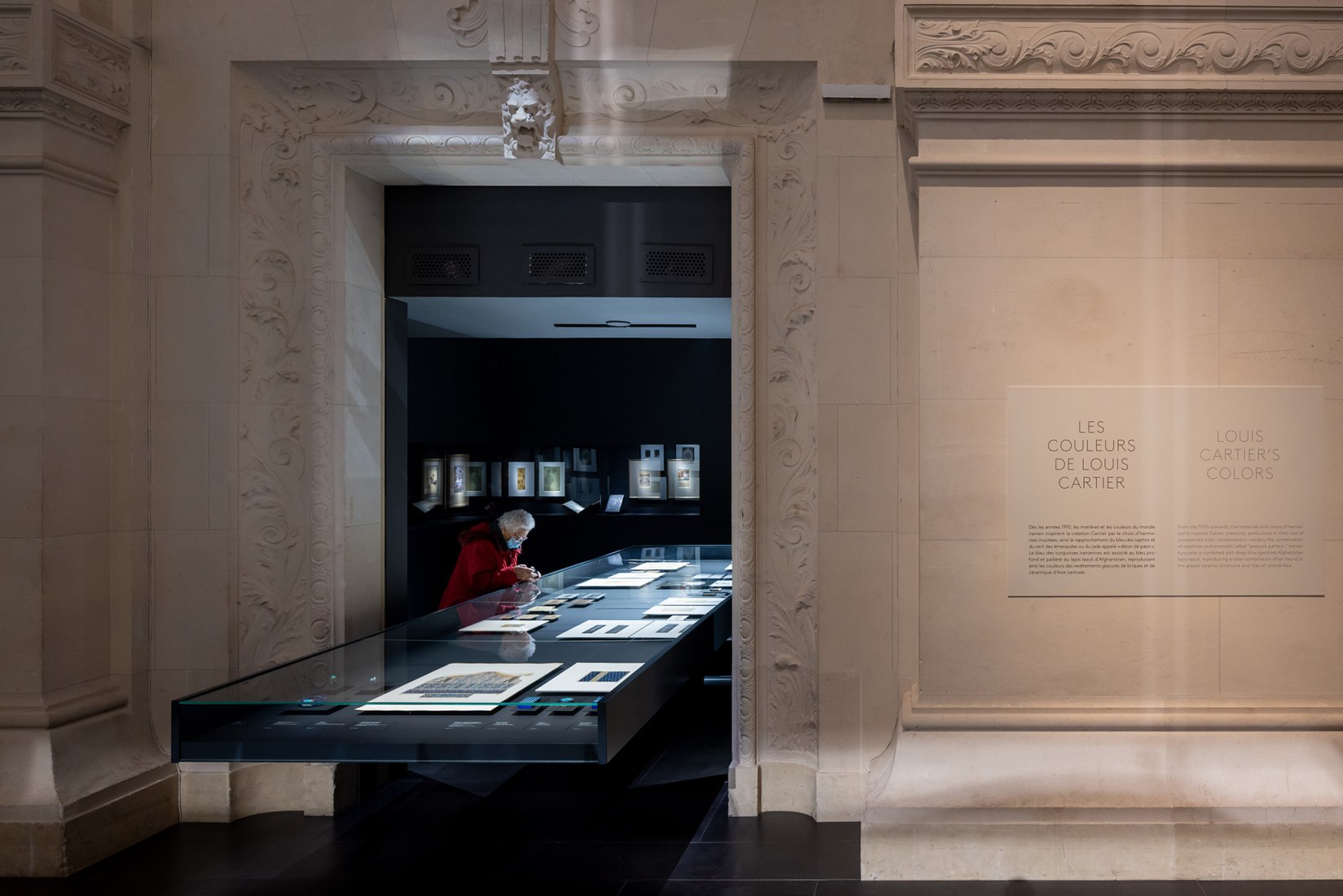 DS+R designed an exhibition taking advantage of the difference of scales between the human scale of the jewelry and the grand scale of the Palais du Louvre's vaulted hall offering an opportunity to present the more than 500 artifacts in unfamiliar ways including radical magnifications and analytical deconstructions.

A series of double-sided vitrines were installed in the threshold between the museum's sweeping central nave and the intimate side enfilades, unveiling typically hidden details of Maison Cartier's creations. 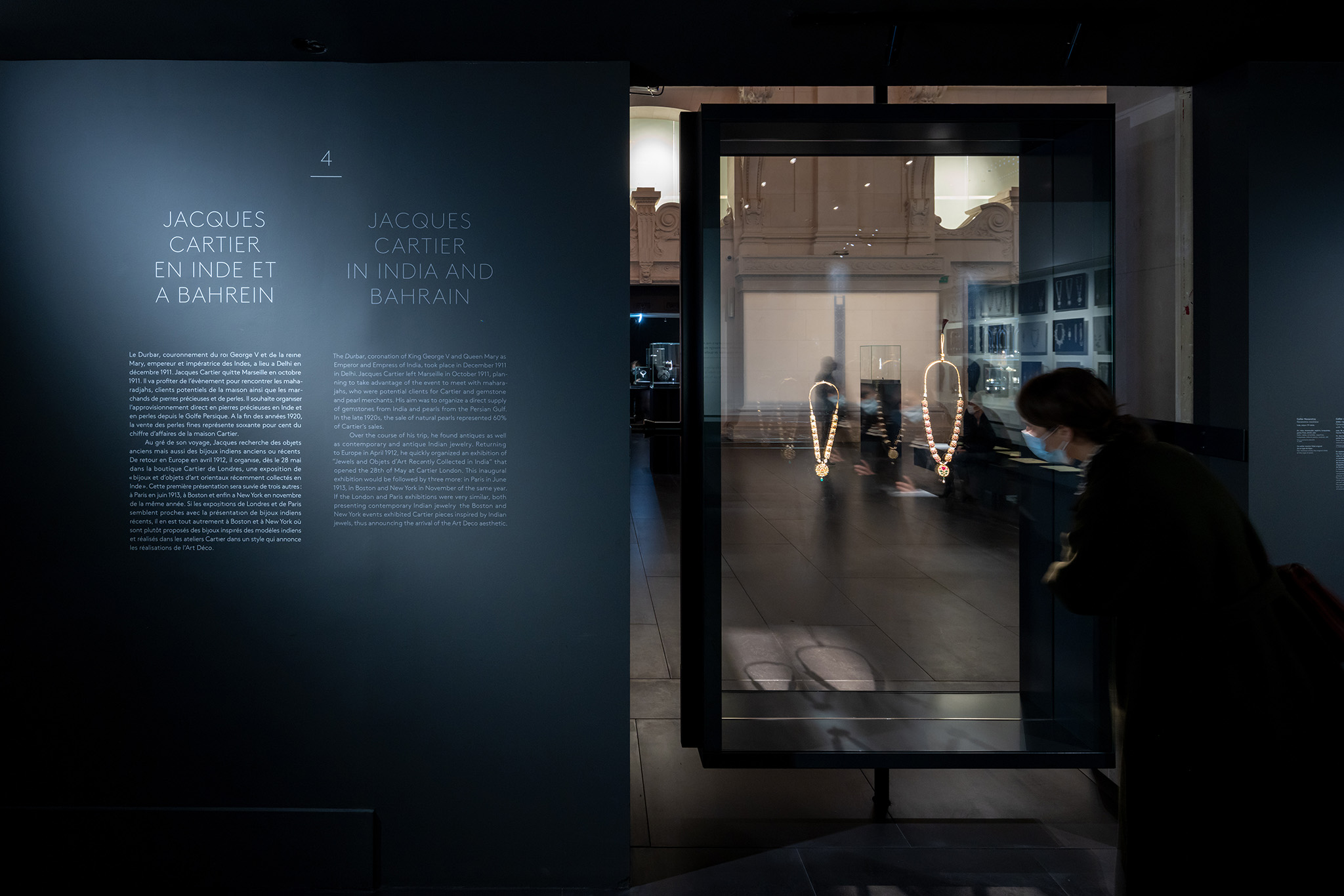 In spring 2022, the Dallas Museum of Art (DMA) will be the sole North American venue for Cartier and Islamic Art: In Search of Modernity, a major exhibition tracing inspirations from Islamic art and design, including from Louis Cartier’s exquisite collection of Persian and Indian art and the work of the designers of the Maison Cartier from the early 20th century to present day.

The exhibition brings together over 400 objects from the holdings of Cartier, the Musée des Arts Décoratifs (Paris), the Musée du Louvre, the Keir Collection of Islamic Art on loan to the Dallas Museum of Art, and other major international collections. Through strong visual juxtapositions and new scholarly research, the exhibition explores how Cartier’s designers adapted forms and techniques from Islamic art, architecture, and jewelry, as well as materials from India, Iran, and the Arab lands, synthesizing them into a recognizable, modern stylistic language unique to the house of Cartier.

Cartier and Islamic Art: In Search of Modernity explores the origins of Islamic influence on Cartier through the cultural context of Paris in the late 19th and early 20th centuries and the figure of Louis J. Cartier (1875–1942), a partner and eventual director of Cartier’s Paris branch, and a collector of Islamic art. Louis encountered Islamic arts through various sources, including the major exhibitions of Islamic art in Paris in 1903 and 1912 at the Musée des Arts Décoratifs, which were held to inspire new forms of modern design, and a pivotal exhibition of masterpieces of Islamic art in Munich in 1910.

Paris was also a major marketplace for Islamic art and a gathering place of collectors. It was around this time that Cartier and his designers began to experiment with new modes of design, looking to Japanese textiles, Chinese jades, Indian jewelry, and the arts and architecture of the Islamic world to expand upon the “garland style” that had brought success to the house at the turn of the 20th century. Louis Cartier’s own collection of Persian and Indian paintings, manuscripts, and other luxury objects—reconstructed in this exhibition for the first time in nearly 80 years—also served as inspiration for these new designs, and together these influences would be essential to the development of a new aesthetic called “style moderne" and later “Art Deco” at Cartier. 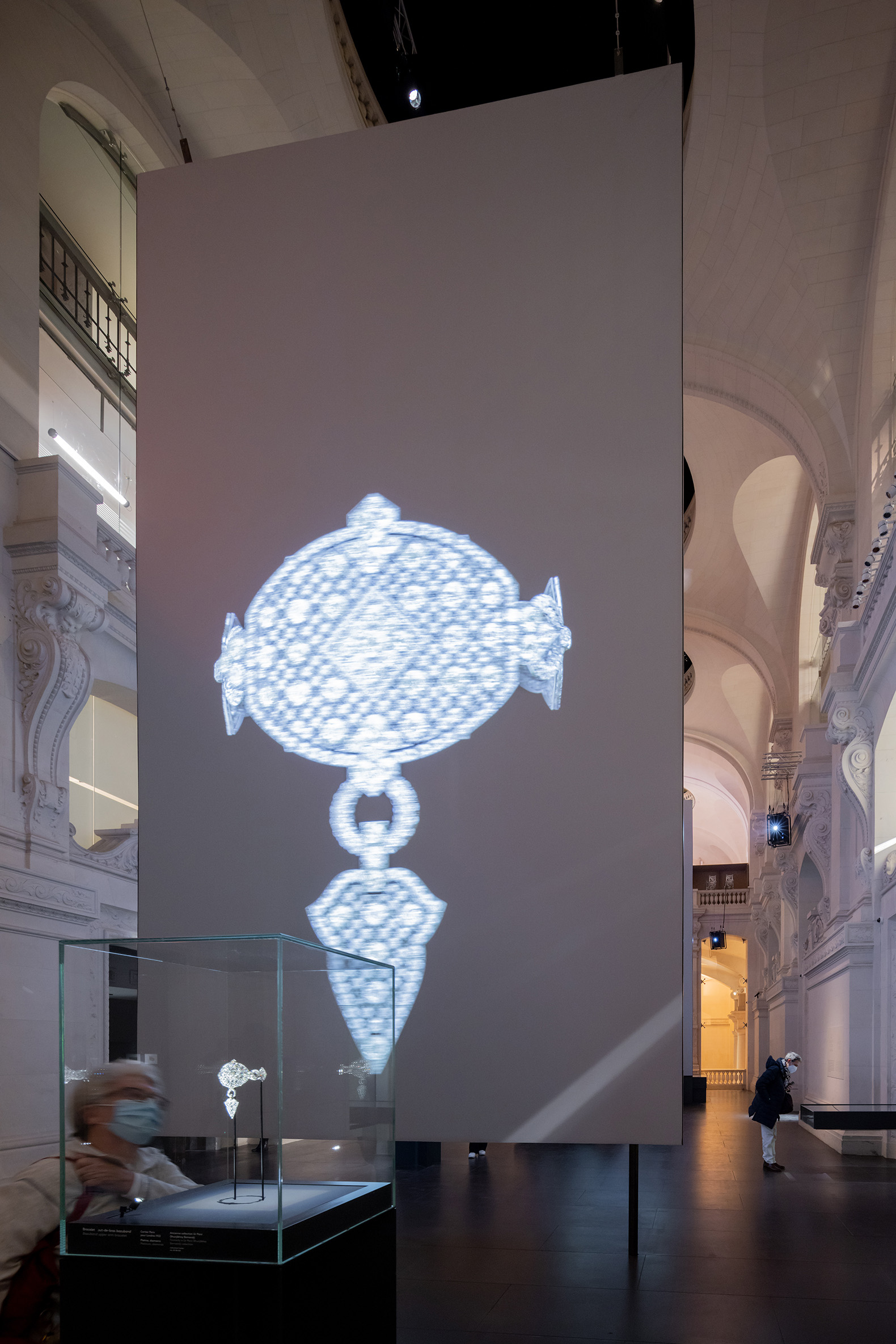 Bringing together over 400 objects from the DMA’s own holdings and other major international collections, Cartier and Islamic Art: In Search of Modernity presents a rare opportunity to encounter not only a wide array of iconic Cartier objects, but also their original sources of inspiration.

The exhibition showcases works of Cartier jewelry and luxury objects alongside historical photographs, design drawings, archival materials, and works of Islamic art, including those displayed in the Paris and Munich exhibitions and in Louis’s own collection, as well as works bearing motifs that would become part of Cartier’s lexicon of forms. Additionally, interactive digital technologies will enable visitors to view concept notebooks and sketchbooks from the Cartier Archives, allowing for insight into the creative process at the Maison, from an original source object to a motif, to its adaptation as a jewelry design, and finally to its execution in metal, stones, and organic materials.

Juxtaposing Cartier jewels, drawings, and archival photographs with examples of Islamic art that bear similar forms and ornaments, Cartier and Islamic Art: In Search of Modernity illustrates the inspiration, adaptation, and recombination of motifs deriving from Islamic sources in Cartier’s design for jewelry and luxury objects. These include geometric forms (polygons and stars), naturalistic forms (vine scrolls, split palmettes, and animals), and Chinese designs (cloud collars and interlocking shapes) that were naturalized in the Islamic lands under the Mongol and Timurid rulers of the Middle East and India since the 13th century. 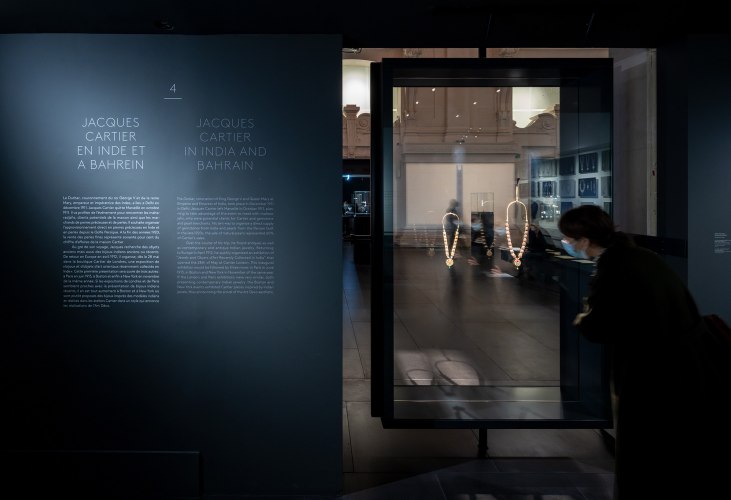 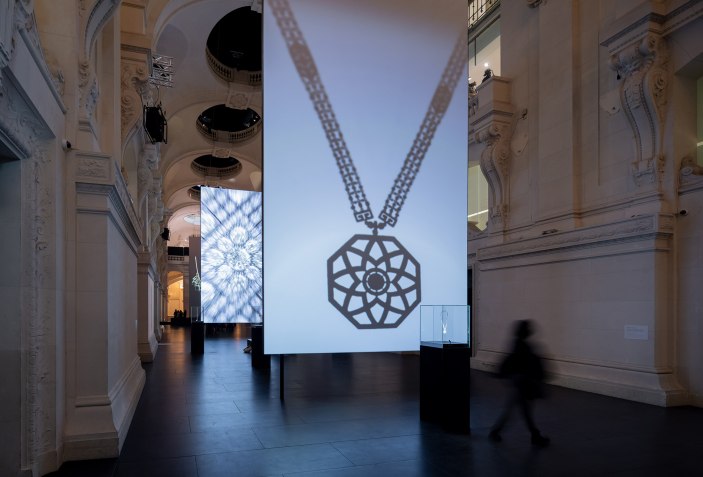 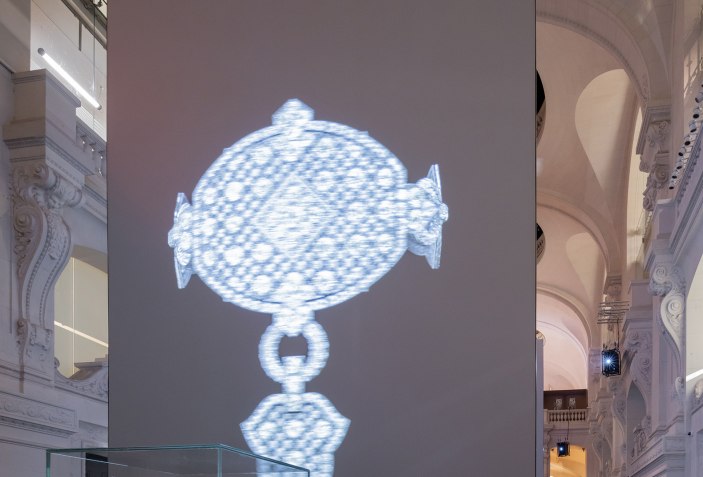 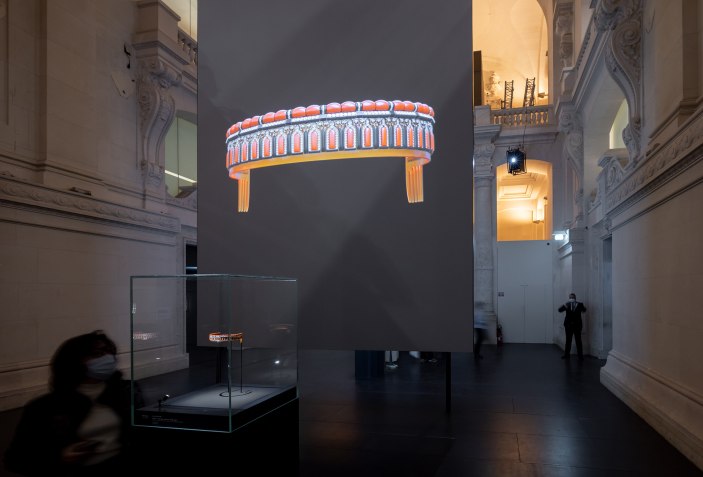 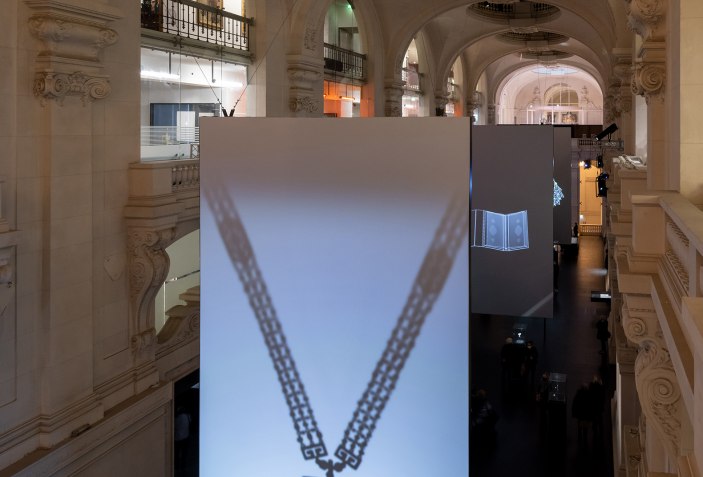 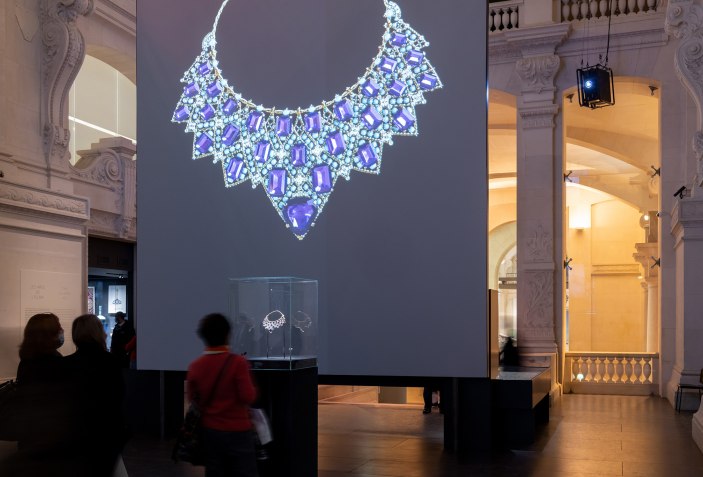 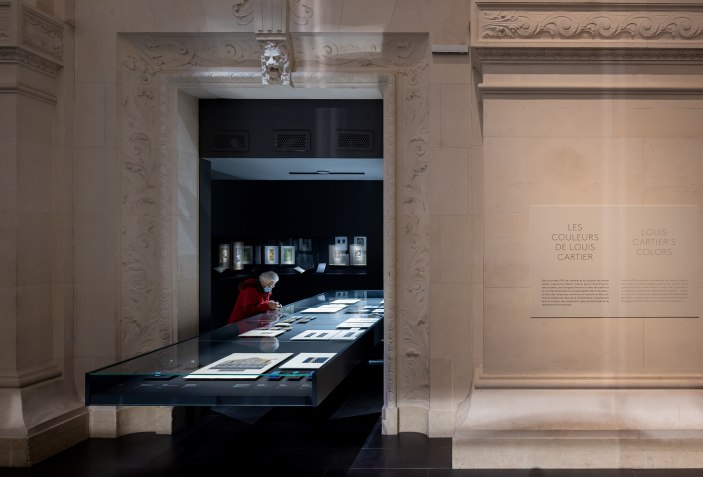 Curators
Co-curated by Dr. Heather Ecker, The Marguerite S. Hoffman and Thomas W. Lentz Curator of Islamic and Medieval Art at the DMA; Sarah Schleuning, The Margot B. Perot Senior Curator of Decorative Arts and Design at the DMA; Évelyne Possémé, Chief Curator of Ancient and Modern Jewelry at the Musée des Arts Décoratifs, Paris; and Judith Hénon, Curator and Deputy Director of the Department of Islamic Art at the Musée du Louvre, Paris.

Dates
Cartier and Islamic Art will make its US premiere in Dallas from May 14 through September 18, 2022, following its presentation at the Musée des Arts Décoratifs, Paris, from October 21, 2021, through February 20, 2022.

Organizer
Co-organized by the Dallas Museum of Art (DMA) and the Musée des Arts Décoratifs, Paris. 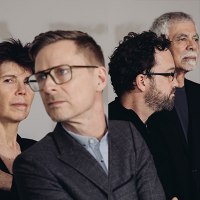 Diller Scofidio + Renfro Studio. Founded in 1981, Diller Scofidio + Renfro (DS+R) is a design studio whose practice spans the fields of architecture, urban design, installation art, multi-media performance, digital media, and print. With a focus on cultural and civic projects, DS+R’s work addresses the changing role of institutions and the future of cities. The studio is based in New York and is comprised of over 100 architects, designers, artists and researchers, led by four partners--Elizabeth Diller, Ricardo Scofidio, Charles Renfro and Benjamin Gilmartin.

DS+R completed two of the largest architecture and planning initiatives in New York City’s recent history: the adaptive reuse of an obsolete, industrial rail infrastructure into the High Line, a 1.5 mile-long public park, and the transformation of Lincoln Center for the Performing Arts’ half-century-old campus. The studio is currently engaged in two more projects significant to New York, scheduled to open in 2019: The Shed, the first multi-arts center designed to commission, produce, and present all types of performing arts, visual arts, and popular culture, and the renovation and expansion of The Museum of Modern Art (MoMA). Most recently, the studio was also selected to design: Adelaide Contemporary, a new gallery and public sculpture park in South Australia; the Centre for Music, which will be a permanent home for the London Symphony Orchestra; and a new collection and research centre for the V&A in Queen Elizabeth Olympic Park.

Recent projects include the 35-acre Zaryadye Park adjacent to the Kremlin in Moscow; the Museum of Image & Sound on Copacabana Beach in Rio de Janeiro; The Broad, a contemporary art museum in Los Angeles; the Berkeley Art Museum and Pacific Film Archive at the University of California, Berkeley; the Roy and Diana Vagelos Education Center at Columbia University in New York; and The Juilliard School in Tianjin, China.

DS+R’s independent work includes the Blur Building, a pavilion made of fog on Lake Neuchâtel for the Swiss Expo; Exit, an immersive data-driven installation about human migration at the Palais de Tokyo in Paris; Charles James: Beyond Fashion at the Metropolitan Museum of Art in New York; Arbores Laetae, an animated micro-park for the Liverpool Biennial; Musings on a Glass Box at the Fondation Cartier pour l’art contemporain in Paris; and Pierre Chareau: Modern Architecture and Design at the Jewish Museum in New York. A major retrospective of DS+R’s work was mounted at the Whitney Museum of American Art in New York. Most recently, the studio designed two site-specific installations at the 2018 Venice Biennale and the Costume Institute’s Heavenly Bodies: Fashion and the Catholic Imagination exhibition at the Metropolitan Museum of Art in New York. DS+R also directed and produced The Mile-Long Opera: a biography of 7 o’clock, a free, choral performance featuring 1,000 singers atop the High Line, co-created with David Lang.

DS+R has been distinguished with the first MacArthur Foundation fellowship awarded in the field of architecture, Time Magazine's "100 Most Influential" list, the Smithsonian Institution's 2005 National Design Award, the Medal of Honor and the President's Award from AIA New York, and Wall Street Journal Magazine's 2017 Architecture Innovator of the Year Award. Ricardo Scofidio and Elizabeth Diller are fellows of the American Academy of Arts and Letters and the American Academy of Arts and Sciences, and are International Fellows at the Royal Institute of British Architects (RIBA). 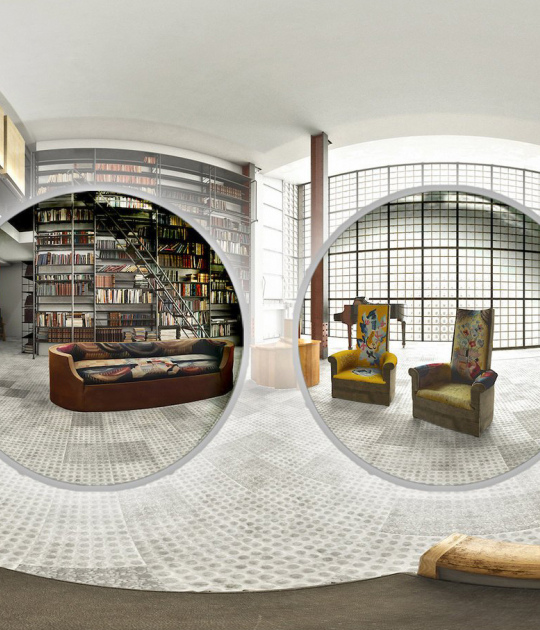 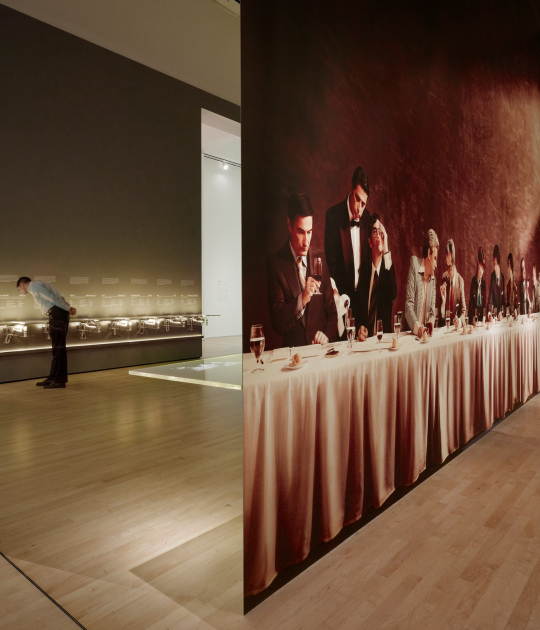 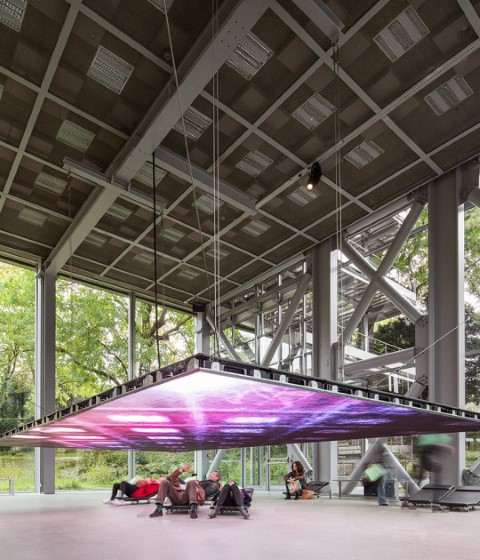 Musings on a Glass Box by Diller Scofidio + Renfro 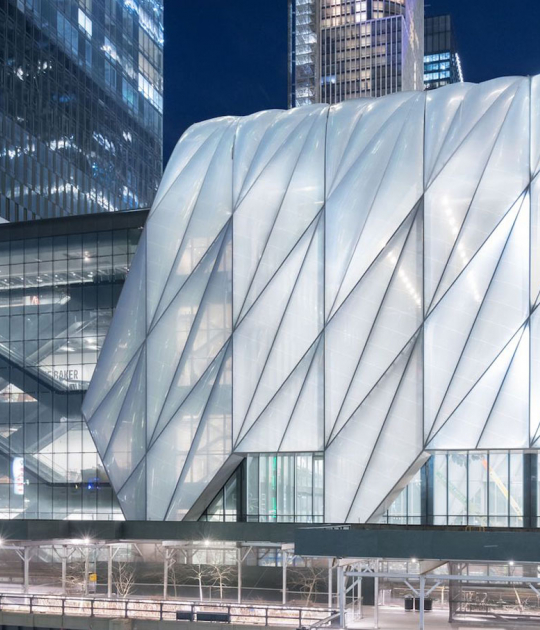 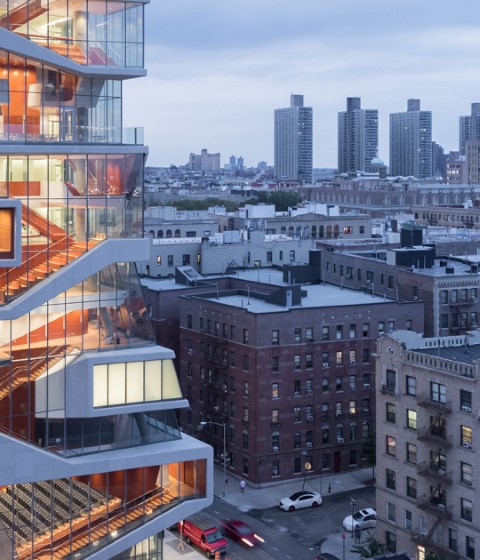