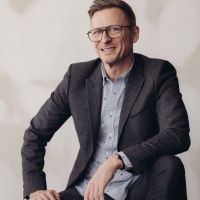 Charles Renfro, AIA (Baytown, Texas in 1964) joined Diller Scofidio + Renfro (DS+R) in 1997 and became a Partner in 2004. He led the design and construction of the studio’s first concert hall outside of the US - The Tianjin Juilliard School in China - as well as the studio's first public park outside of the US - Zaryadye Park in Moscow. Charles has also led the design of much of DS+R's academic portfolio, with projects completed at Stanford University, UC Berkeley, Brown University, the University of Chicago, and the recently completed Columbia Business School.

Charles is also leading the design of two projects in his native Texas: the renovation of Frank Lloyd Wright’s Kalita Humphreys Theater in Dallas, and Sarofim Hall, a new home for Rice University’s Visual Arts department in Houston. Charles is the Co-President of BOFFO, a nonprofit organization that supports the work of queer LGBTQ+ BIPOC artists and designers. He has twice been recognized with the "Out100" list and has also been distinguished as a notable LGBTQ leader by Crain's New York Business. He is a faculty member of the School of Visual Arts.