"When the function has been solved, then the project can start."
Margarete Lihotzky, 1926 in Rationalization in the household

Although history recognizes her fundamentally by the innovation of the kitchen Frankfurt, Margarete Lihotzky makes other important contributions such as: the development of social housing in the post-wars, functional and dignified public centers, configuration of the cities and pedagogical infrastructure. 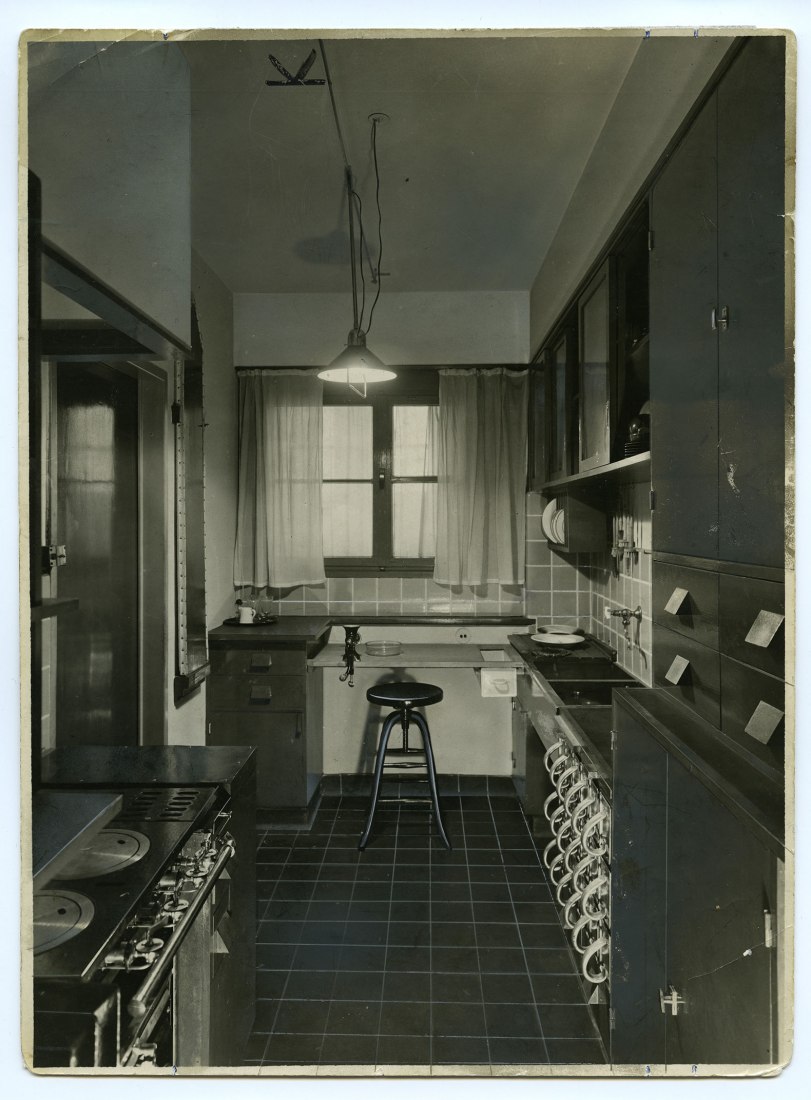 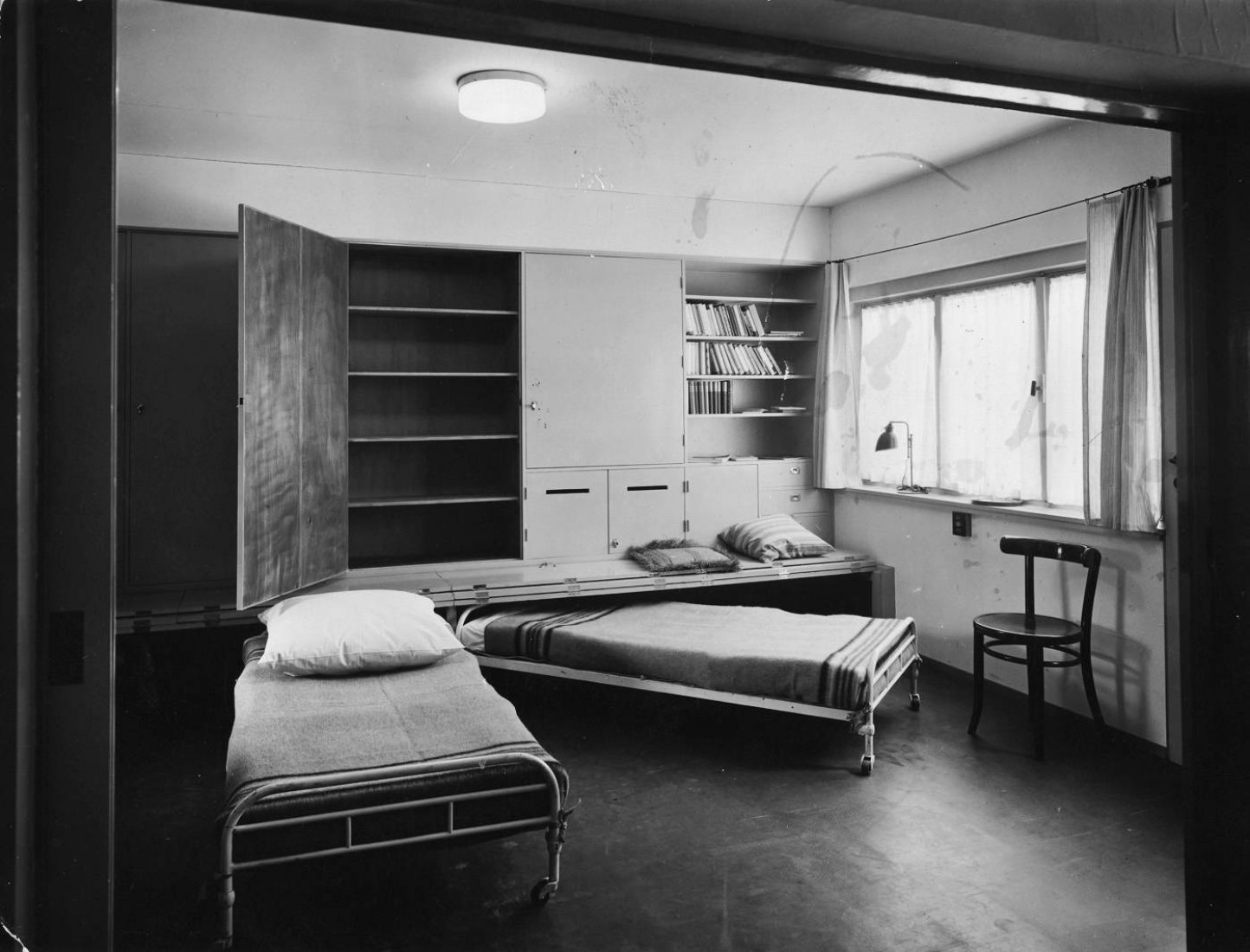 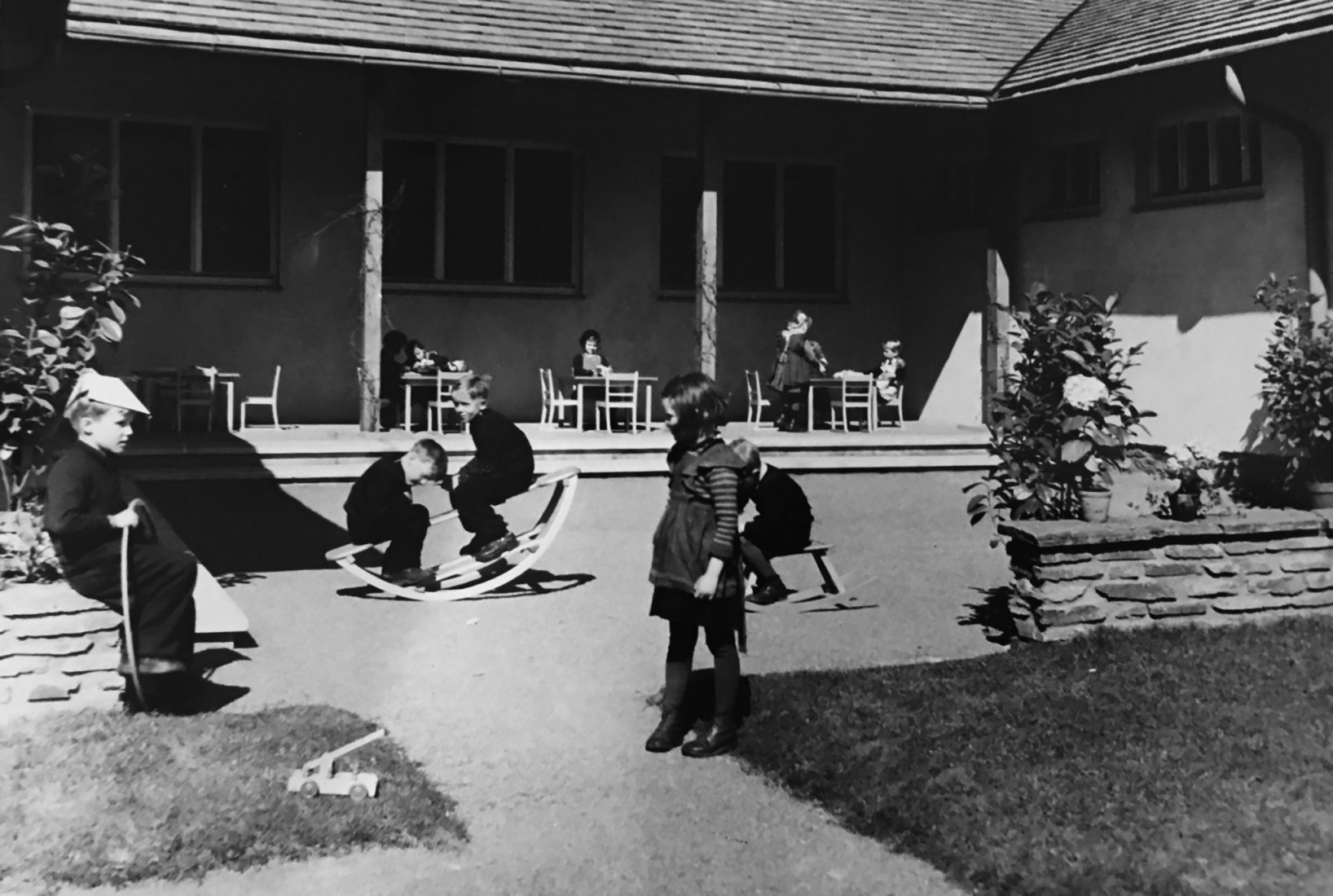 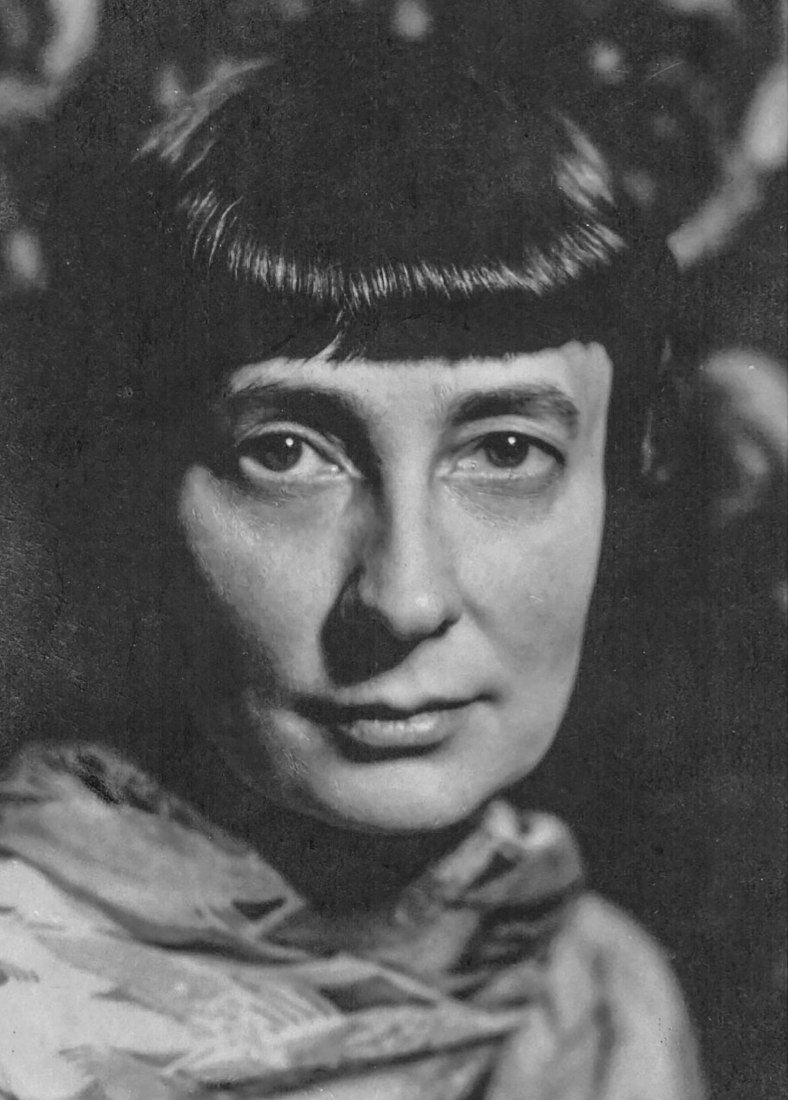 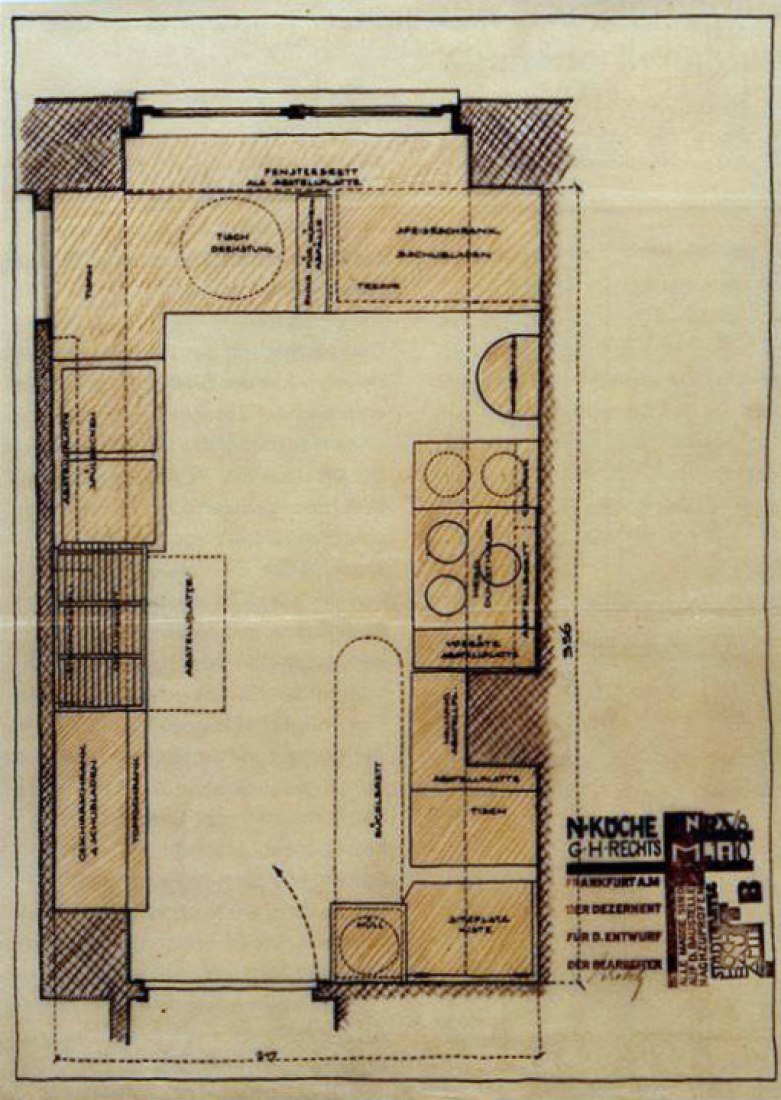 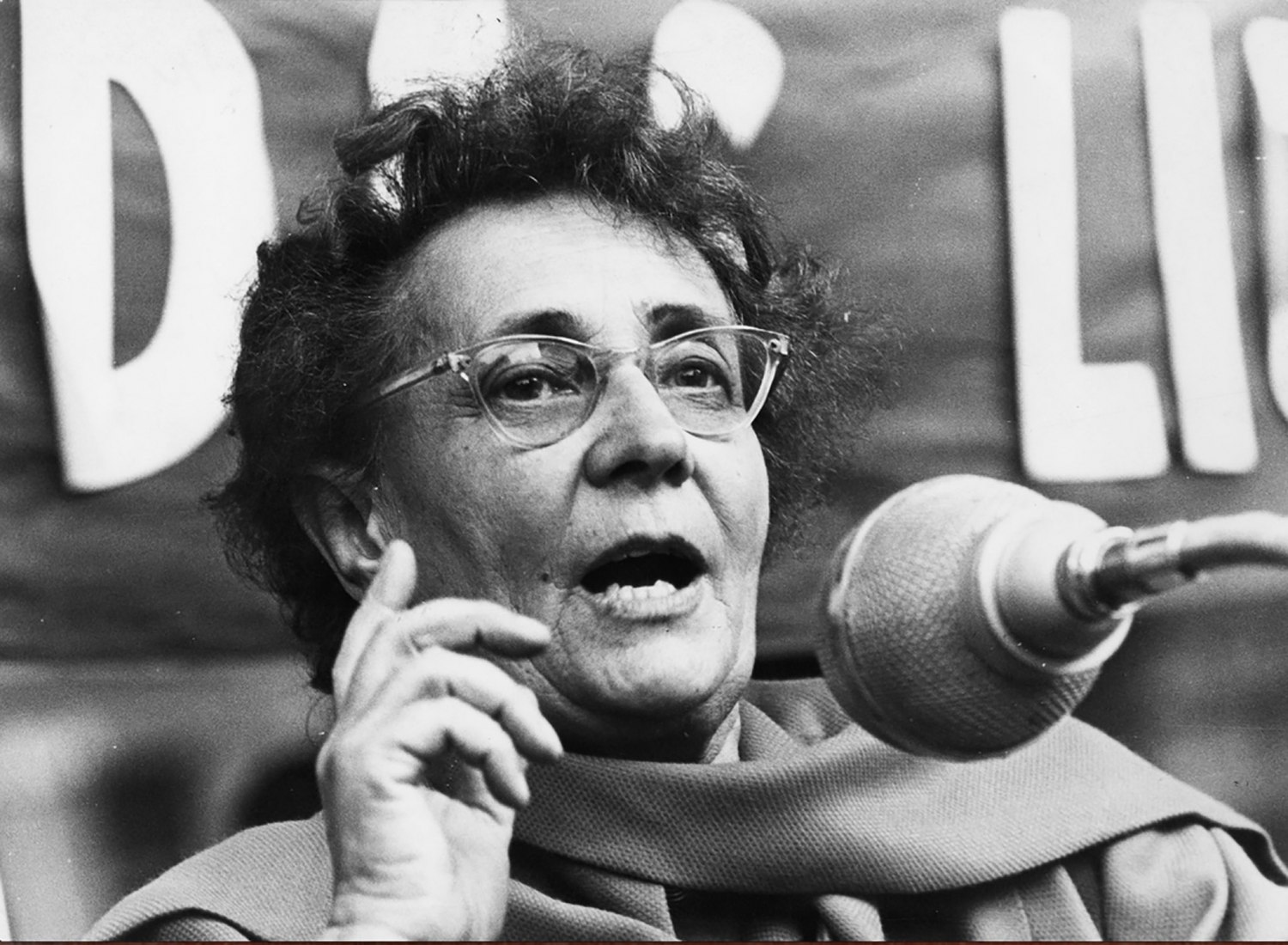 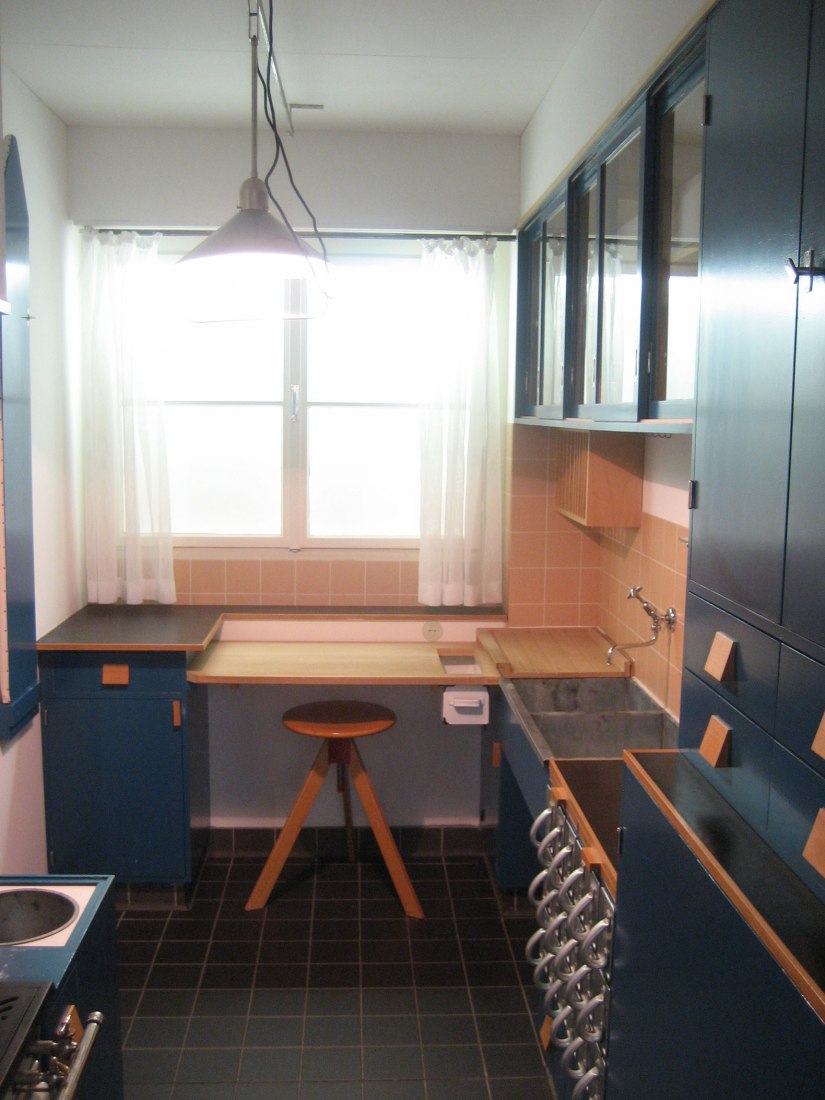 Her long and prominent professional and political career throughout the 20th century make her not only a pioneer of rational and humanized architecture, but also an icon of female empowerment.

Vocation and beginnings in social architecture

Born in 1897 into a family of liberal and pacifist ideology, which was key to study at the K.K Kunstgewerbeschule (School of Arts and Crafts in Vienna). Despite the skepticism of her teachers and family, she becomes the first Austrian architect. In 1917, Oskar Strnad, a teacher at the school, proposes Margaret to participate in a project contest for the construction of a working class neighborhood and also, he advised that before designing she should know the reality of how people live in these places. In fact, there is a deep reflection by Lihotzky on analyzing and understanding an environment before projecting and on the importance of approaching the needs of users before designing. Together with Adolf Loos they are part of the Siedlerbewegung (Citizens' Association). The motto in which workers and architects gathered was to "build for a better world".

"Every thinking woman must be aware of the delay that domestic methods still have, and she must recognize that they hinder her own development, and, therefore, also that of her family"
Margaret Lihotzky, 1926

In 1925, Ernst May encouraged Lihotzky to participate in a public social housing project in Frankfurt. This is where her most famous creation would be commissioned: the Frankfurt kitchen. Although there is a historical association of women to the preparation of food, it is not surprising that a female architect was commissioned to design one of the most important domestic spaces in social housing. Lihotzky sought an affordable solution for a kitchen, based primarily on two concepts: hygiene and ergonomics. In such a way, that he studied the relation time and movement of the work done in the kitchen. With this, she was able to propose the kitchen measures optimized to 187 × 344 cm, which allowed to considerably reduce the distance between the activities for the preparation of the food.

The crisis of World War II would not only bias the impact of social housing in Frankfurt, but would force Margaret Lihotzky along with her husband Wilhelm Schütte and other architects to flee to other countries, especially to Asia. When she returned to Vienna in 1938, she was put in prison as part of the resistance against Nazism. In 1985, she published a book that gathers her experiences from the war during the resistance and imprisonment in "Memories of the resistance: the combative life of an architect of 1938-1945".

After her experiences outside Europe, during prison and post-war, Lihotzky's commitment to dignified and hygienic social spaces is confirmed by the design of the Kindergarten am Kapaunplatz built between 1950-1952. In this project she puts into practice several sanitary and pedagogical theories, for which she proposes a single-storey building with an H-shape, and a hipped roof. The relationship of this building with the exterior is key to prevent the spread of diseases and stimulate children's development through outdoor activities. The size and distribution of the windows allows cross ventilation to be another of the strategies to have fresh air and prevent the spread of any epidemic. The use of pergolas allows children to take their naps even outside. Likewise, the floor-ceiling distance is another of Lihotzky's innovations in terms of the activities carried out by the infants inside the building.

Margarete Schütte-Lihotzky is a revolutionary architect not only for her designs but for her outstanding social commitment in Austria, Germany, Russia, Cuba and for the UN. From the end of her political imprisonment until her death in the year 2000, she remained very active in the profession, especially with housing projects and kindergartens, giving lectures and participating in the first two CIAMs of the postwar period. Together with Lina Loos she was one of the precursors of the Union of Democratic Women of Austria. Beyond the rationalization of spaces, this architect leaves a legacy of commitment and battle for a more human architecture that brings us closer to the free and fair societies that we hope for in this century. 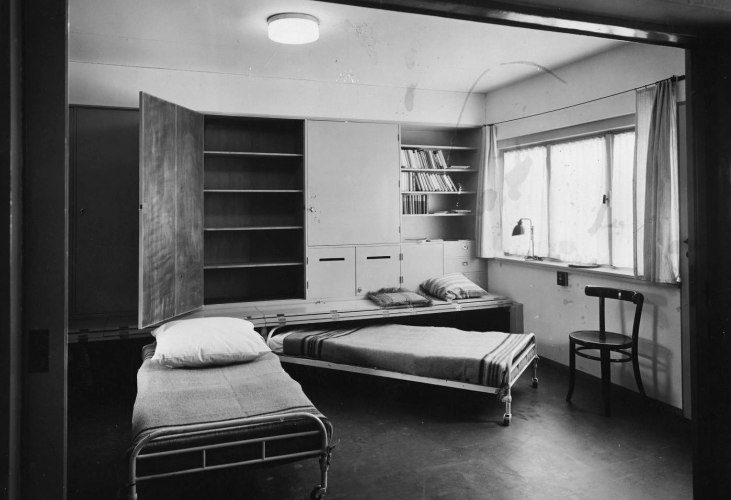 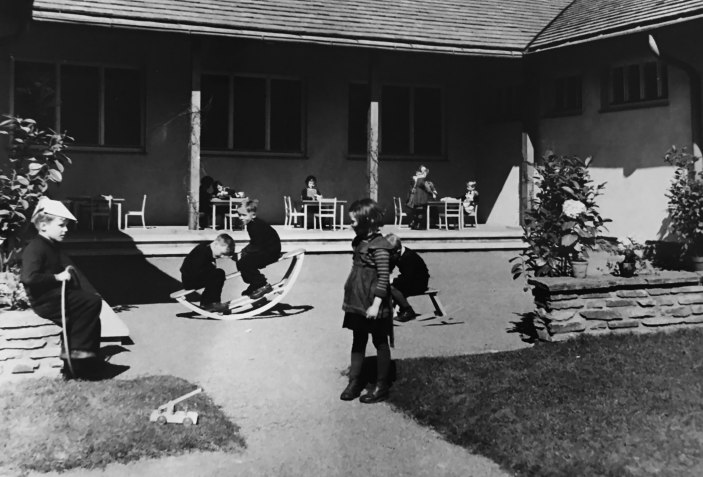 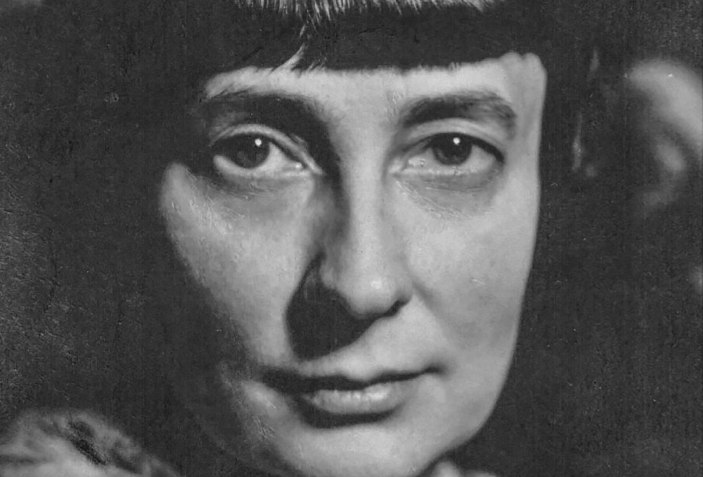 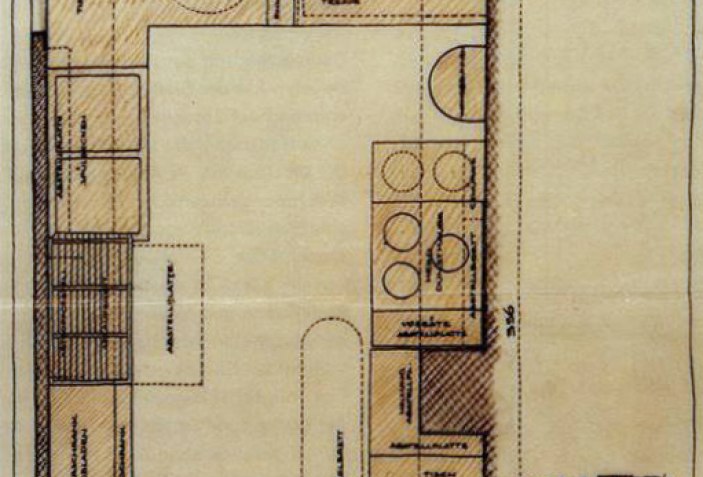 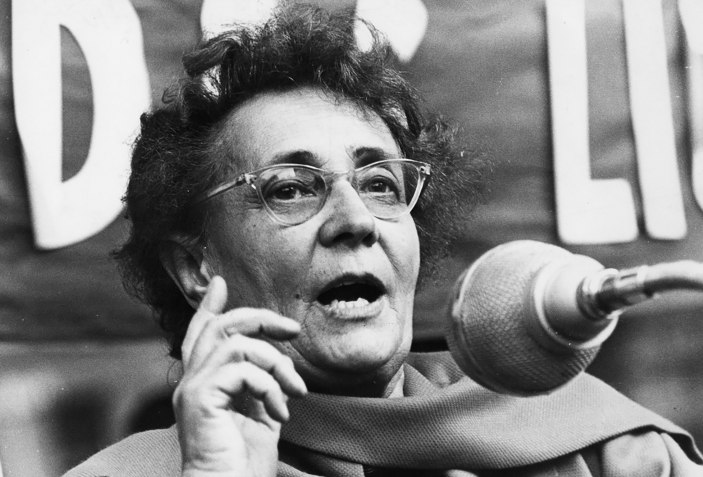 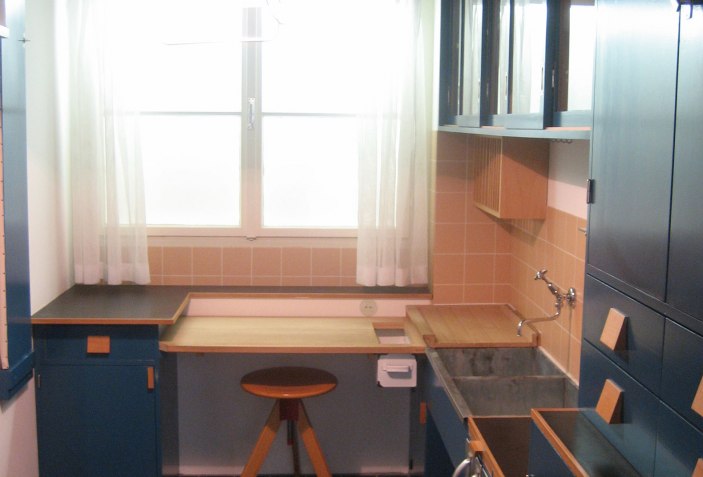 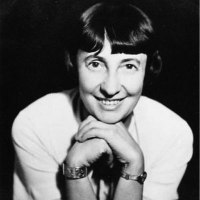 Margarete Schütte-Lihotzky (1897-2000) was the first female Austrian architect, known primarily for the design of the Frankfurt' Kitchen in 1927.

She was born on January 23, 1897 in Vienna. From 1915 to 1919, she studied as the first woman at the School of Applied Arts Architecture in Vienna with Oskar Strnad and Heinrich Tessenow. This was followed by several assignments for the construction of houses, gardens and kindergartens. In 1926 she was transferred by Ernst May to Frankfurt, where she displayed her famous Frankfurt kitchen in 1927. From 1930 to 1937, she was part of the May group as a specialist in buildings for children in Russia, after which she went into exile in Istanbul. When she entered Austria in 1940 as a member of a resistance movement, she was arrested and imprisoned until the end of the war. In 1945/46, he directed the Department of Institutions for Children of the Sofia Baudirektion. In the following years she received several commissionings in Austria, Cuba and Berlin.

'Every thinking woman must be aware of the delay that domestic methods still have, and she must recognize that they hinder her own development, and, therefore, also that of her family'. (Die Frankfurter Küche, page 16)

With these words, Margarete Schütte-Lihotzky presents her Frankfurt kitchen in 1927. Guided by the question of how to improve a woman's work by making suitable housing, she presents the model for our modern and equipped kitchen. Her kitchen would be installed in more than 10,000 apartments. A year earlier, Ernst May invited her to Frankfurt to work in the Construction Department, as a typist. In 1930, she followed a call to Moscow, again together with Ernst May and many other German architects, to plan the construction of new Russian industrial cities. Among other things, the German team was commissioned to build the city of Magnitogorsk. Schütte-Lihotzky herself was employed as an expert in buildings for children. In addition, she is represented in the Werkbundsiedlung in Vienna since 1932 with two houses.

In 1937 she left Russia and spent the next three years in Istanbul, where she became a member of an anti-fascist resistance movement and continued to design buildings for children.

In 1940 she was arrested in Austria and imprisoned until the end of the war. In 1947 she participated in the first CIAM conference in Zurich. Subsequently, she develops other facilities for children, including the famous but never executed modular system, a prefabricated system that can be combined in any configuration, for the city of Vienna. In 1956 she made study trips to China and in 1961 to Cuba.

She published "One million cities in China" in 1958, "Study area in life" in 1970 and  her "Memories of the resistance 1938-45" in 1981/82. In 1989 she received an honorary doctorate from the University of Graz and received the first prize at the Rietveld Academy in Amsterdam for her contribution to "allowing the majority of the population to have a better daily life" (Die Frankfurter Küche, page 58). In 1993, the Museum of Applied Arts in Vienna dedicated a large exhibition to her.

In 1977 she was awarded the Joliot Curie Medal for her achievements in the World Peace Movement, and in 1980 she received the Architecture Prize of the City of Vienna. In 1988 she was offered the Austrian Medal for Science and Art, but she rejected it, as it would have been presented by the then Austrian president, Kurt Waldheim, who had been accused of hiding his Nazi past. Years later, she accepted it. 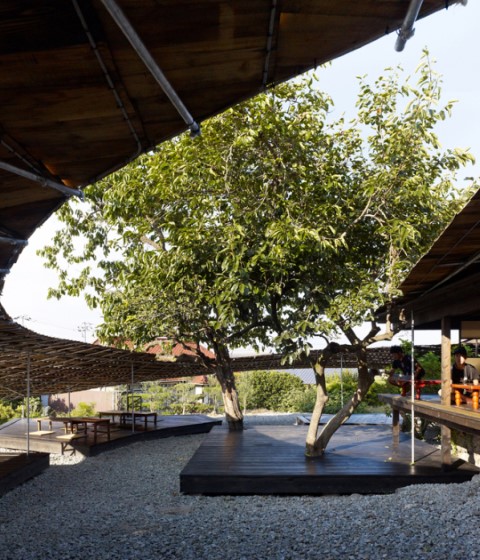 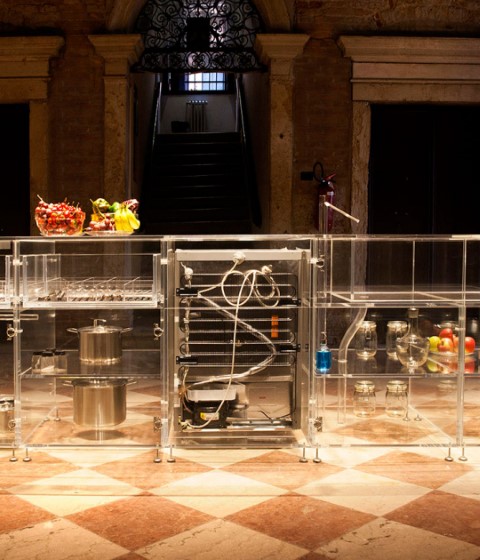 The Infinity Kitchen of MVRDV at Venice Biennale 2016 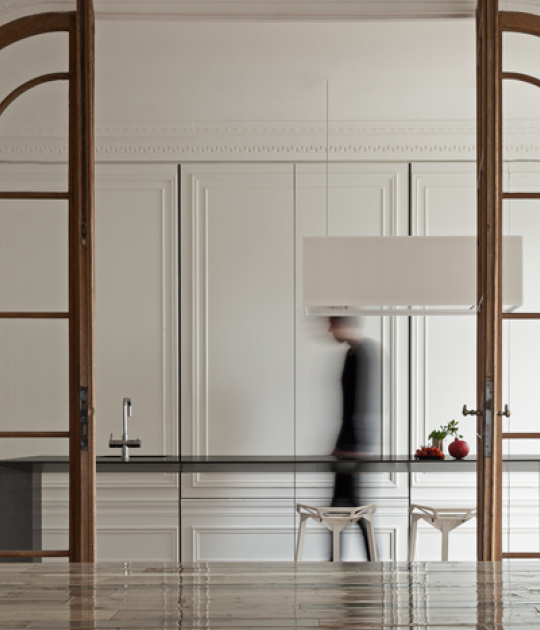 Invisible kitchen by i29 interior architects 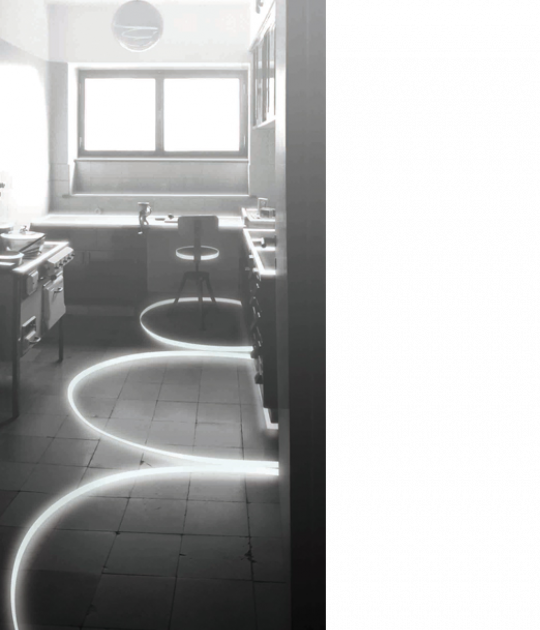 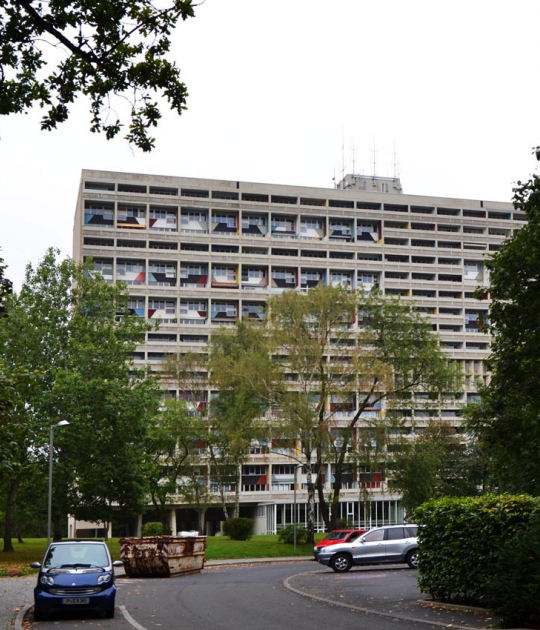