The completed Dymaxion Car was featured in an exhibition of the work of Buckminster Fuller curated by Foster in Madrid last September. Here, Norman Foster talks about his relationship with Fuller, the continued relevance of the car, and the legacy of his former mentor. As an added treat, they include a short film of Foster driving the new Dymaxion Car #4.

Fuller and the Dymaxion Car No. 3. 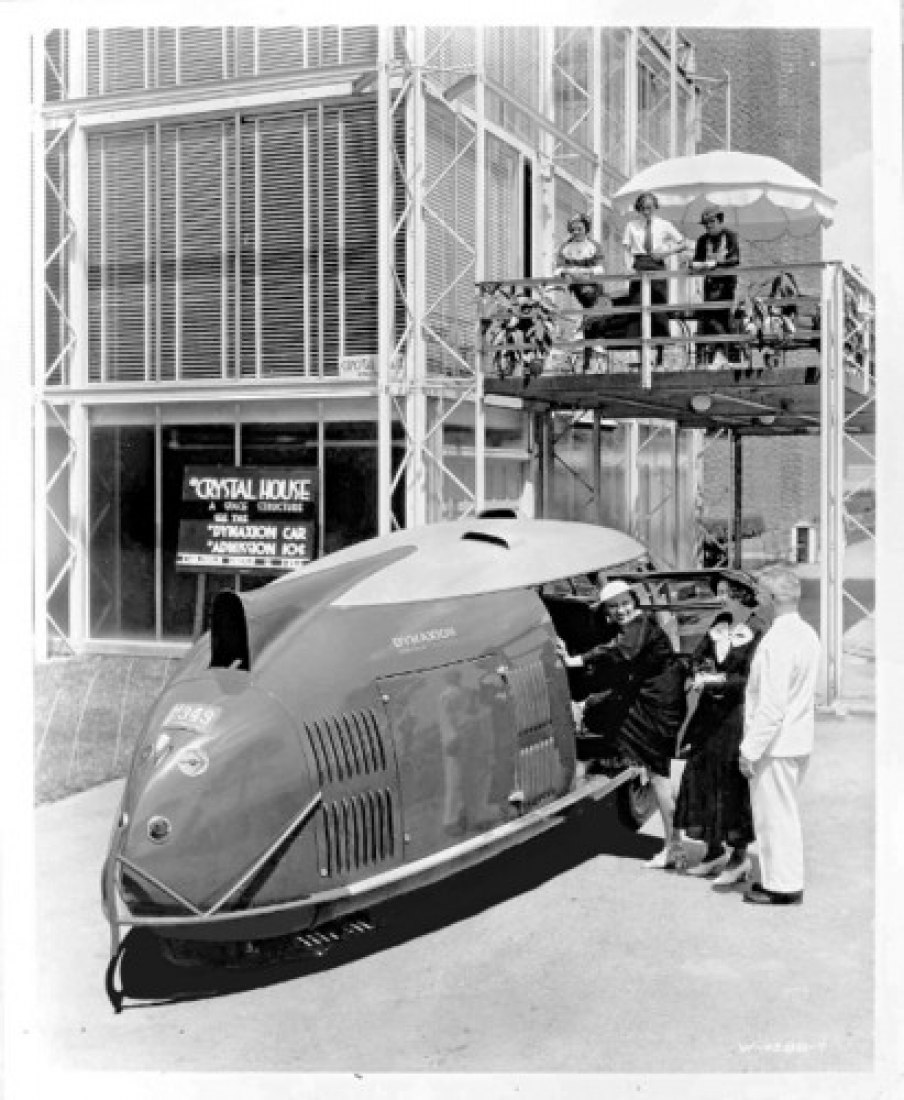 Fuller shows off the Dymaxion Car No. 3 to visitors to the Chicago World’s Fair in 1934. The Crystal House, designed by George F. Keck, is in the background. 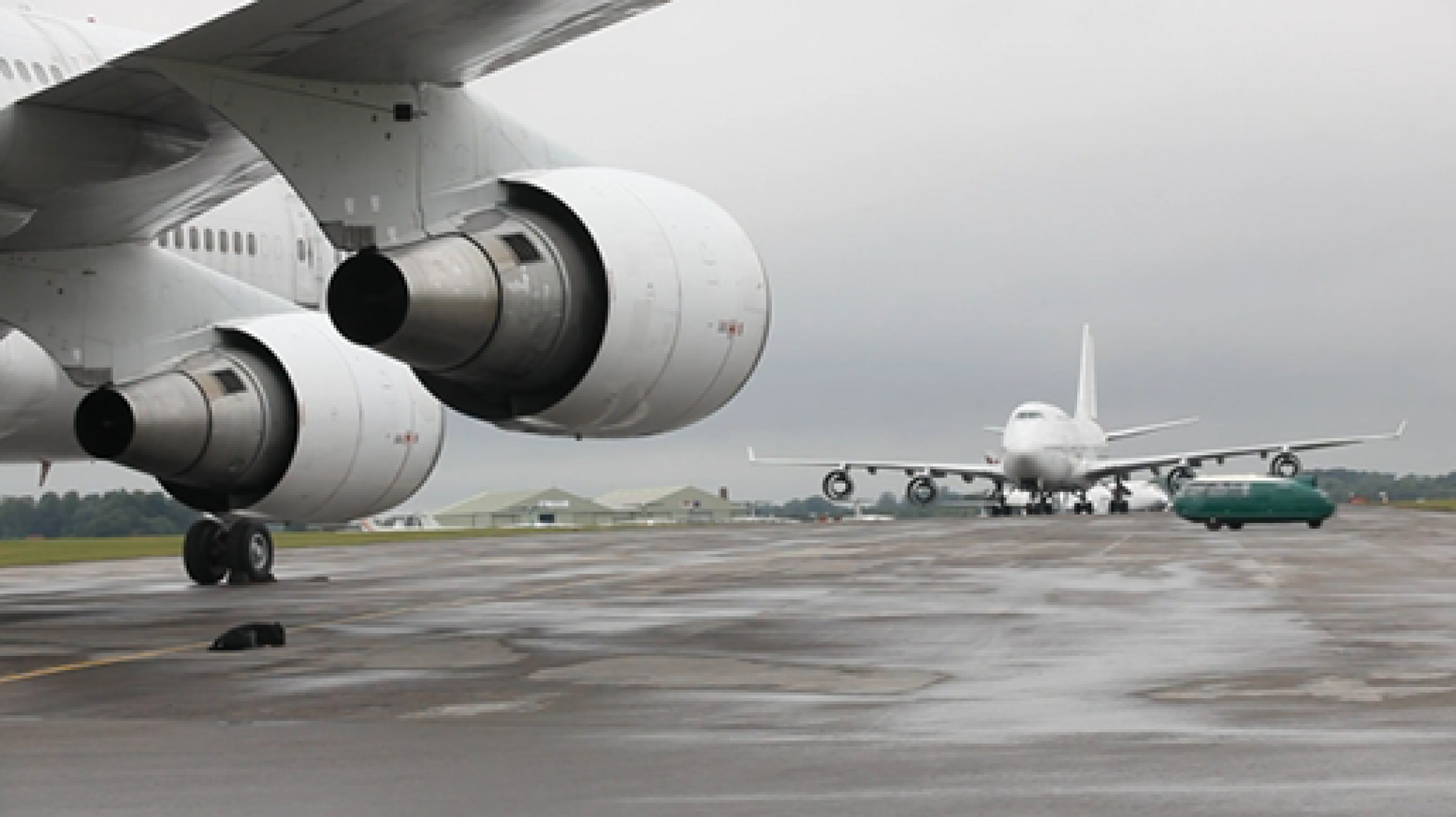 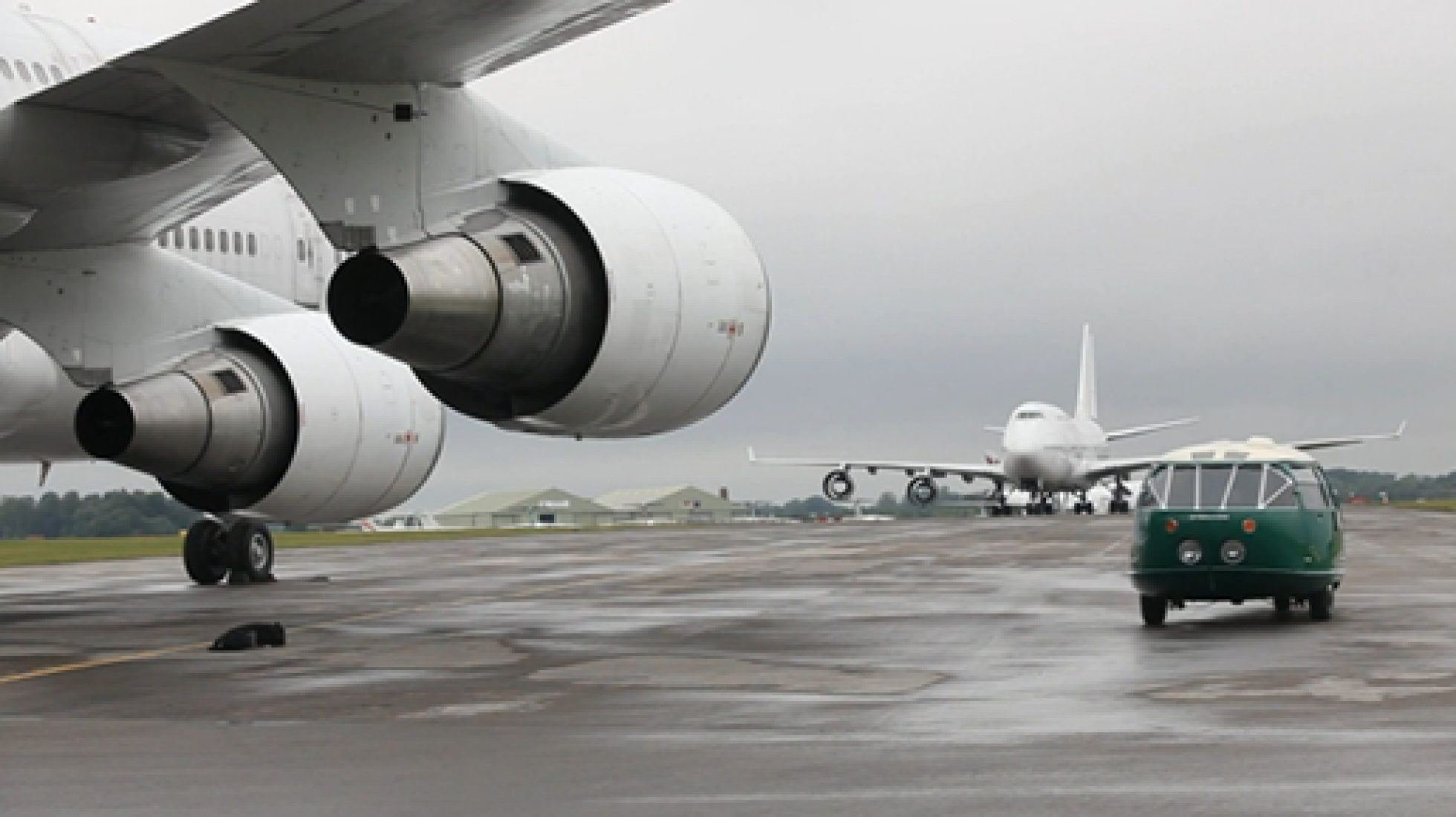 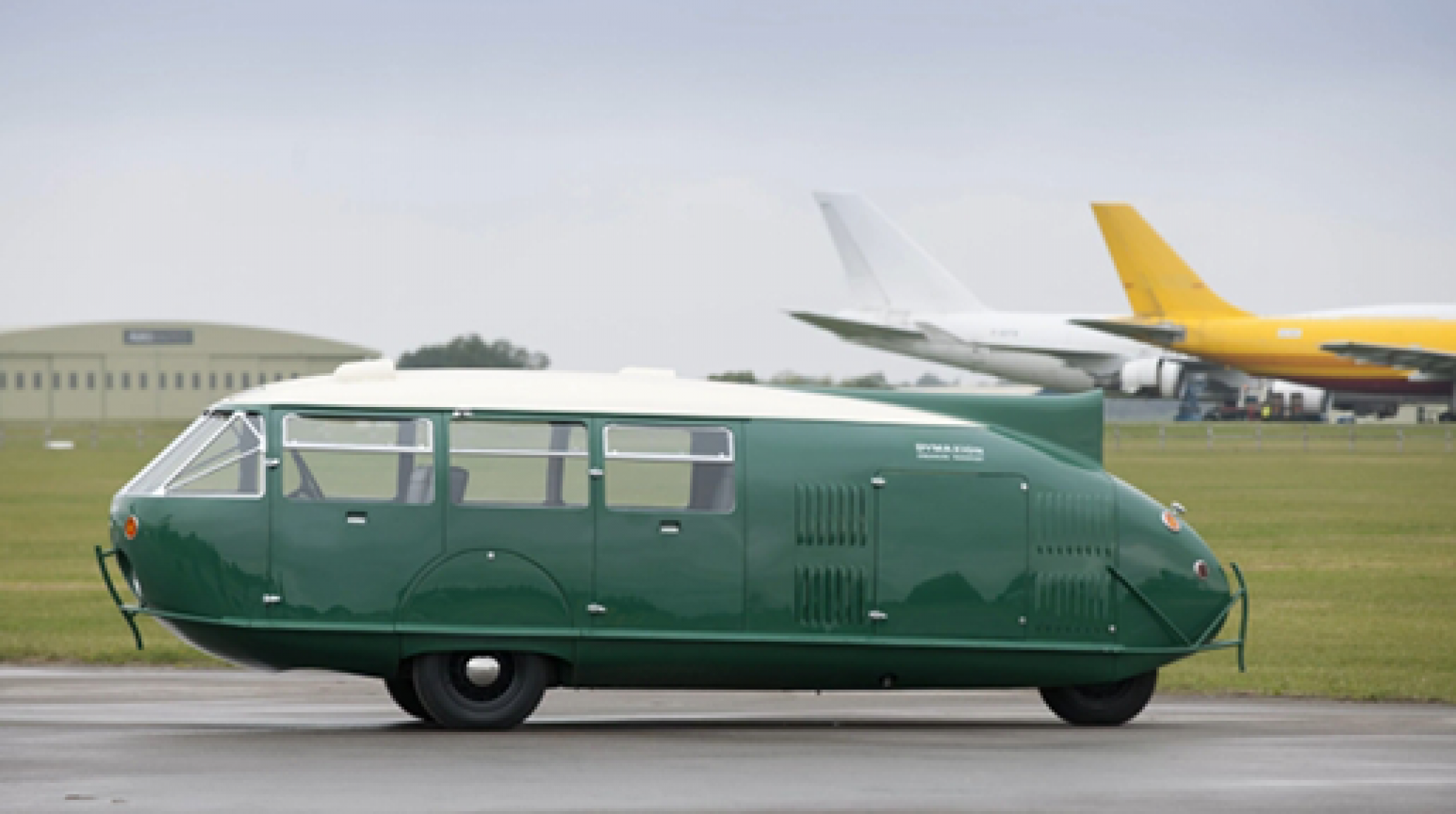 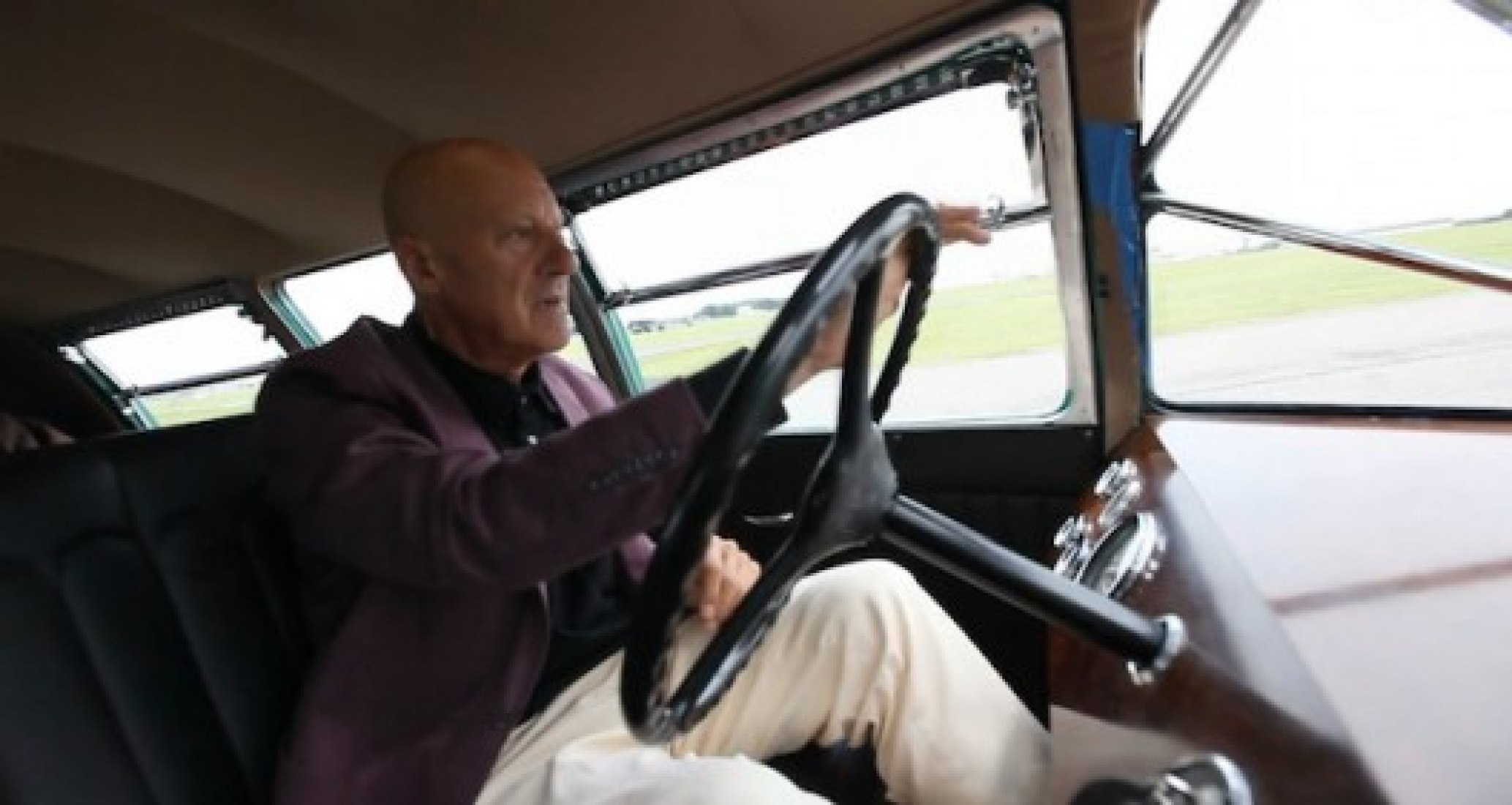 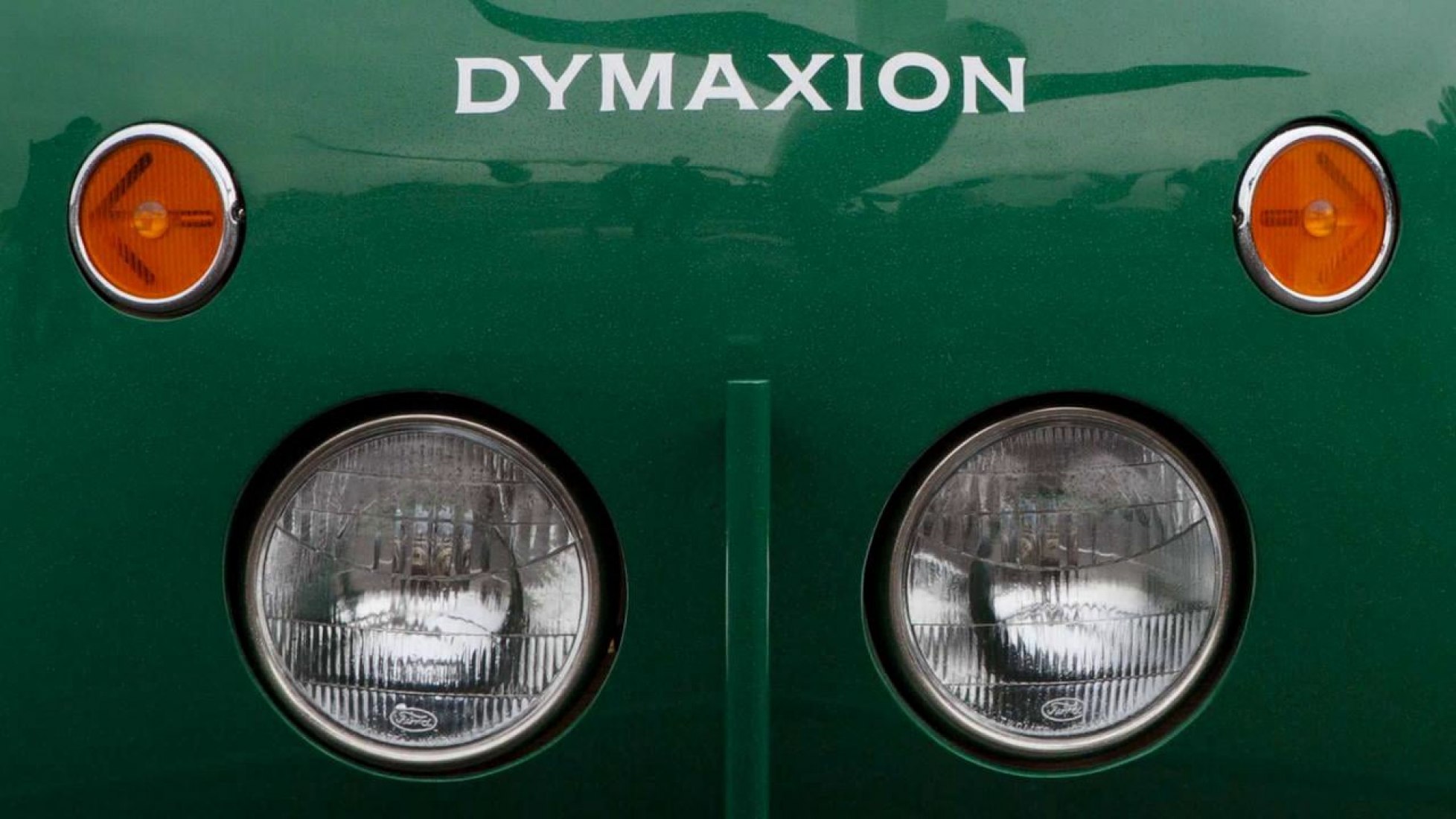 Buckminster Fuller’s futuristic three wheeled car was brief, with a mere three actually built. Incredibly efficient the streamlined body with long tail-fin averaged 35 miles to the gallon and could achieve 120 mph. The Zeppelin inspired design with a V8 Ford engine was intended to fly as well, Fuller’s vision of revolutionizing how people traveled.Recreating the legendary futuristic Dymaxion Car, Foster’s No. 4 version was a lengthy and expensive two year project, but was obviously a labor of love.

What inspired you to recreate Bucky’s famous Dymaxion Car?

Bucky is never far from my thoughts. We collaborated on projects for the last twelve years of his life. When I was awarded the Royal Guild Gold medal in London, he gave the talk. At that point we had decided to do houses for each other. So he came over and we talked about the project. He gave the talk and then he left for America, off to see his terminally ill wife, Ann, in the hospital. On arrival, he had a fatal heart attack at her bedside and she died thirty six hours later. Curiously, on that trip to England, he said to me, “You know, Norman, anytime, I can pull the plug.” I guess that’s when he pulled the plug. He got there and realized that his wife wasn’t going to recover.

Why remake the Dymaxion now?

It was an interesting exercise for us. Like everything else he did, the car was pure Bucky. He was a friend of Henry Ford, which insured that he would get Ford parts for 30 percent of their true cost. So he took the flathead v8 engine, the wheels, the steering wheel, the transmission, and turned it 180 degrees. So you can make a like-by-like comparison between the Dymaxion car and Fords from 1913 to 1933. But the Dymaxion was three times the volume. It had the potential of taking up to eleven rather than four. It was significantly faster, and consumed half the fuel. It was truly doing more with less.

In recreating the new car, where did you draw the line between faithfully executing those original plans and drawings, and making improvements to them?

The #4 car is not a replica of the #3 car, but we did replicate the engine, the Studebaker ignition, the Ford wheels and steering wheel. The only thing that’s not completely authentic and original is the hand break. The original didn’t have one, for some strange reason.

I saw the surviving Dymaxion at the Whitney show a few years back. The interior had badly deteriorated. Your team must have done a great deal of detective work to recreate the interior.

Yes, unbelievable. Fortunately, we know the people at Stanford well, where the archive is. And the people we chose to do the restoration work were also extraordinarily incredible at research. We generated a huge body of knowledge. People would email and call in. We developed a great archive and out of that produced a book on the car. The book is tiny, tiny tip of the iceberg on all the material we generated.

It took two years to complete this. How much did the project cost?

I’d rather not talk about that. The true answer is an arm and a leg, a lot of money. It took twice as long and cost significantly more than I had budgeted for it. Of course, that’s everybody’s story with any classic restoration. Everyone underestimated the task. But then, it was a group of perfectionists involved, and it’s an absolutely stunning vehicle.

What is the car’s relevance to automobiles today?

First of all, the maxim of doing more with less is more urgent and imperative today than it’s ever been. In a way the Dymaxion was the classic people-mover before its time. The three wheel configuration caused a lot of debate. Was it a stable configuration? Not withstanding the size. It does produce this extraordinarily dramatic turning circle. There is a vintage movie of Bucky pirouetting the car around this policeman. It just nudges the policeman as it circles around him. I’ve driven it in an airfield and explored exactly that capability. There’s something in that feel as you wind the steering wheel and increase the power. The horizon just kind of spins around the cockpit. It’s quite extraordinary. And it’s a show stopper.

It’s not soft, but it’s amazingly cushioned. It’s more like a boat. Of course it was co-designed with Sterling Burgess, the America’s Cup-winning yacht designer. So the ride is quite remarkable. It has a lot of the characteristics of 1930s cars: the break pressure is quite heavy, but that’s normal for vehicles of that period. It has its British MOT and British plates. It is road legal, but since it has precious value I’m not sure that I’m about to drive it on a narrow country lane.

What can it do on a straight away?

You’d be very conformable on legal road speed limits. Natural caution on my part, possibly a side affect of advancing years, introduces a degree of hesitation.

Would it comfortably do 100 kph [sixty miles per hour]?

Oh, yes. It’s also a precursor to something called the D45. The D45 was an urban car, seating five, with the same three-wheel configuration. But the drawings of that demonstrate that it had better stability at speed because the rear wheel extends out to increase the wheel base. We did a series of studies and developed an absolutely beautiful film. We showed that as part of our Bucky exhibition in Madrid. It is quite amusing. The Dymaxion comes out of a 1930s garage in New York and drives past all these old cars. It goes past the Hearst Building, which of course was still relatively new, then crosses the river and goes into a tunnel. It comes out the other side in present day New York. It still looks like something out of a science fiction movie.

It’s interesting how you and Nicholas Grimshaw and Richard Rogers were all drawn to Bucky in your formative years. What drew all of you into his orbit?

It was his philosophy, his optimism, his belief in friendly clean technology that would enable the species to survive if they used their intelligence. There were other influences during that time. But I never dreamed that a few years later I’d end up being approached by Bucky to collaborate with him on projects and for it to become such a close relationship.

You’ve talked about Bucky to younger audiences. Do his ideas connect with them?

I think they really resonate. He empowered a generation. It’s not too much of an exaggeration to say that he triggered the green movement. Whether anything has made enough of an impact can be debated, but certainly the environmental movement is rooted in Bucky. He has tremendous appeal and relevance to younger generation architects and environmentalists today and in a way, I feel that he’s not recognized the way that he should be. He’s been much more widely understood in Europe. I don’t know how you feel, but I don’t think he’s ever been truly understood in America. 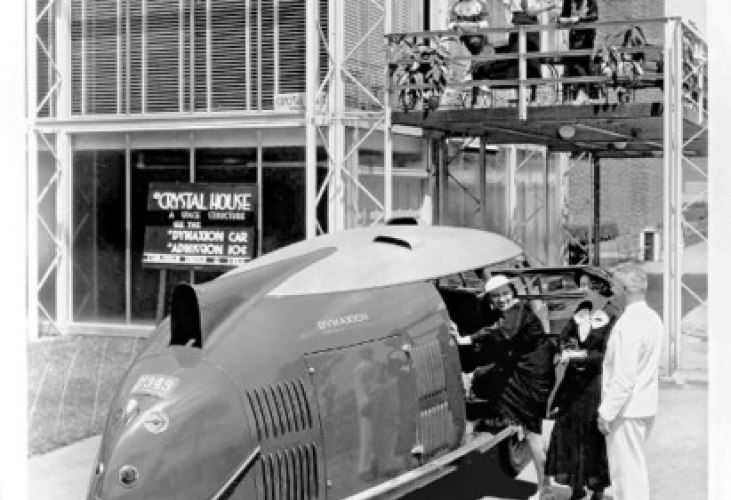 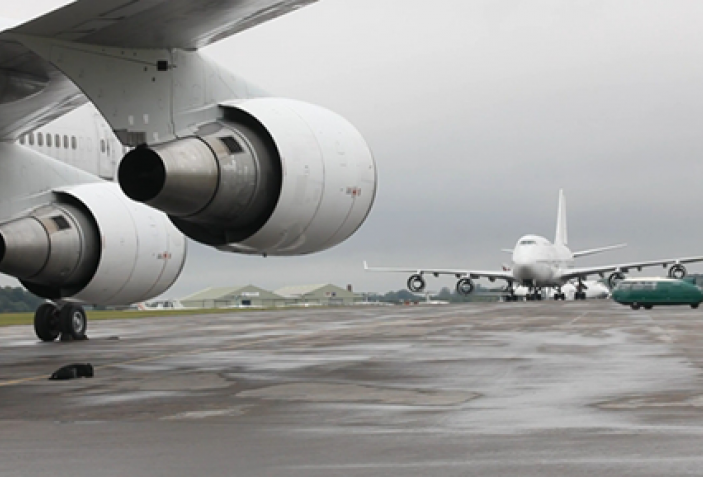 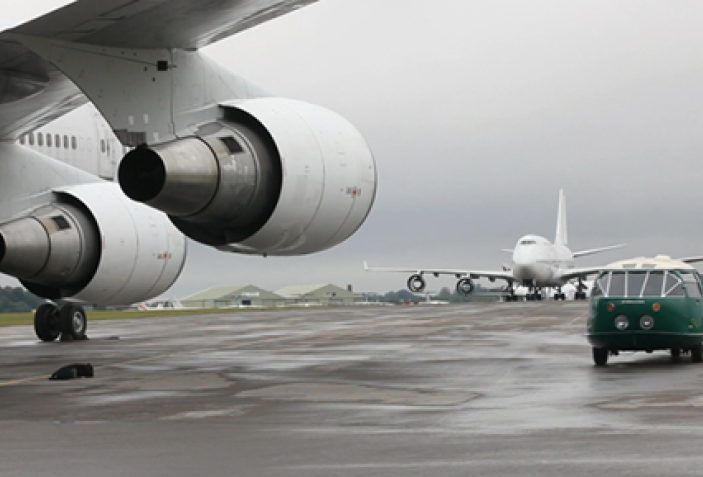 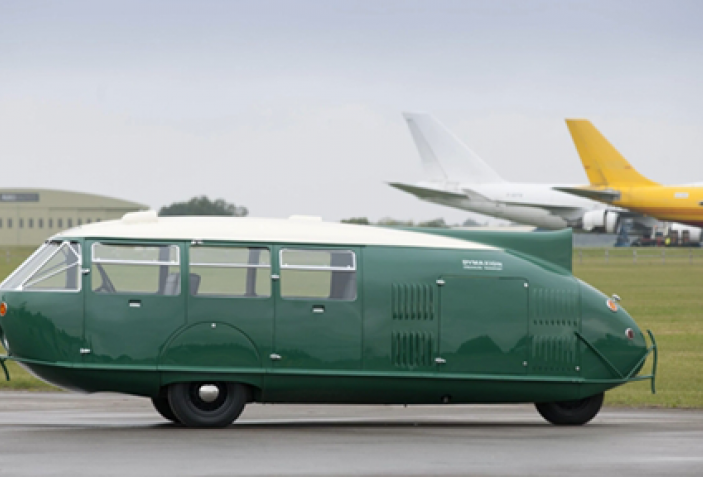 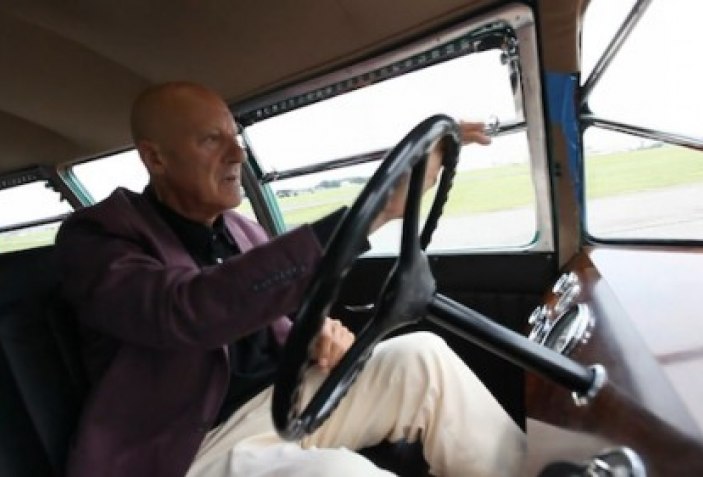 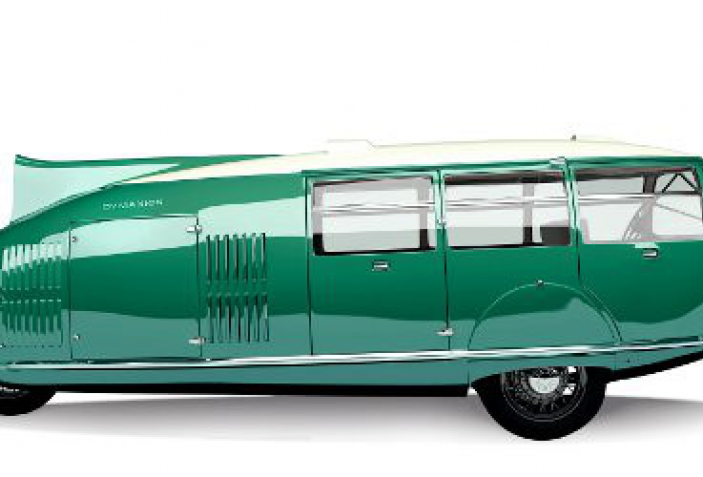 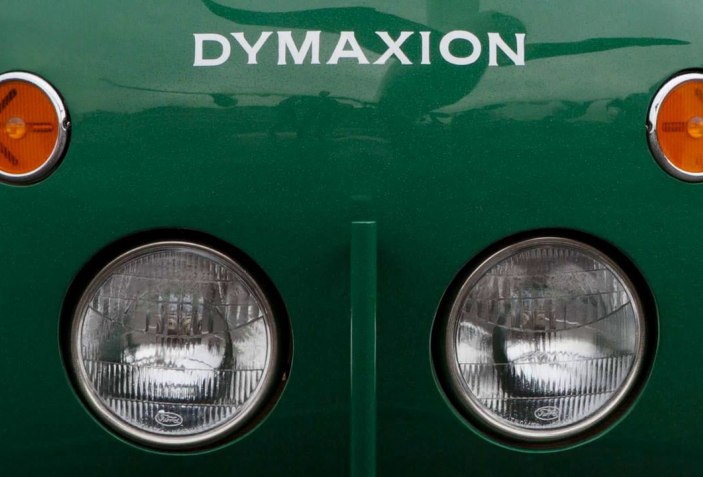 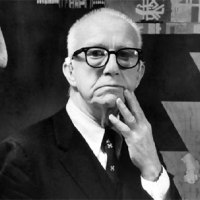 R. Buckminster Fuller (1895-1983) was a renowned 20th century inventor and visionary born in Milton, Massachusetts. Dedicating his life to making the world work for all of humanity, Fuller operated as a practical philosopher who demonstrated his ideas as inventions that he called “artifacts.”

Fuller did not limit himself to one field but worked as a 'comprehensive anticipatory design scientist' to solve global problems surrounding housing, shelter, transportation, education, energy, ecological destruction, and poverty. Throughout the course of his life Fuller held 28 patents, authored 28 books, received 47 honorary degrees. And while his most well-known artifact, the geodesic dome, has been produced over 300,000 times worldwide, Fuller's true impact on the world today can be found in his continued influence upon generations of designers, architects, scientists and artists working to create a more sustainable planet. 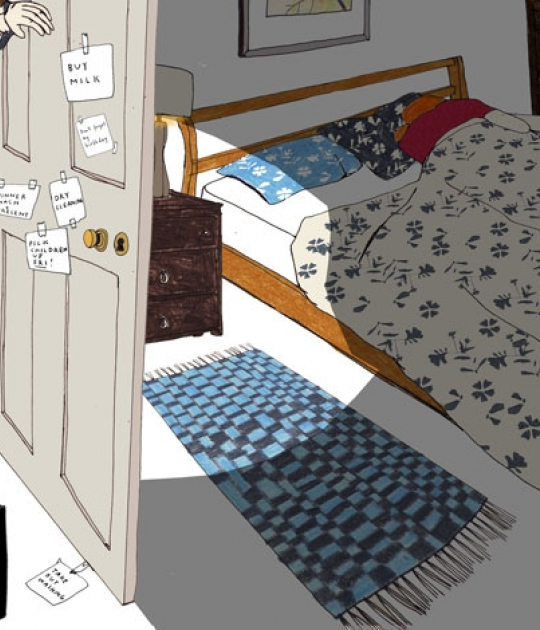 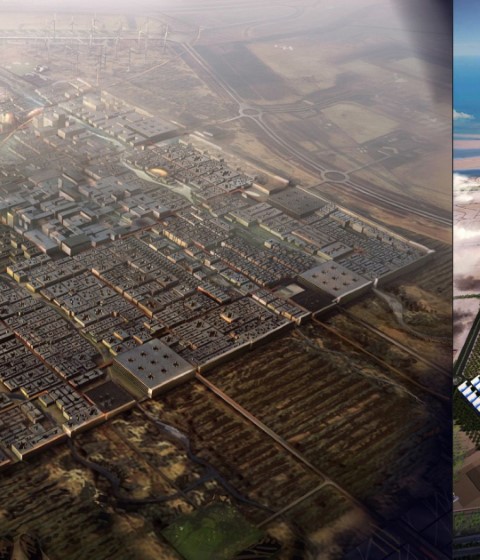 "The future of Architecture" 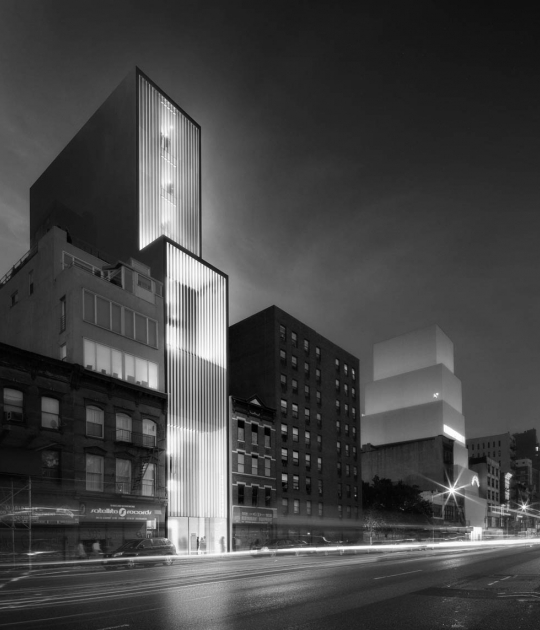 07/12/2010 - Norman Foster will be responsible for creating the city of "Apple" in Cupertino - metalocus, PEDRO NAVARRO
Architecture