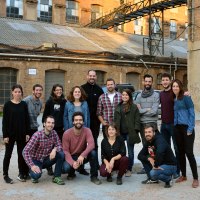 Lacol is an architecture cooperative set up in 2014 in the Sants district (Barcelona). They work with architecture for social transformation, as a tool to intervene in the immediate environment critically.

Currently, it is a team of 14 people who work in various fields of architecture. Their lines of work focus on these five axes: Construction; Cooperative Housing; Pa icipation; Exhibitions and Stage Design; and Urbanism.

The main axis of work on which they apply the knowledge of other fields is the cooperative housing. They have specialized in the promotion of this model as well as in the process of participation of the promotion of the future inhabitants. The most relevant case has been the housing cooperative La Borda, where, in addition to carrying out the architectural project, they have participated in its promotion and all the learning process has been systematized through the book “Habitar en comunidad“ (Libros de la Catarata, 2018).

They are currently building La Balma, a similar housing cooperative in Poblenou, and accompanying several projects in the promotion phase in other places.

In order to promote and make viable the replicability of the model, we work in the design of public policies, advise municipalities, and give conferences and write articles in different publications. Lacol is part  of La Dinamo, a foundation for the consolidation of cooperative housing in Catalonia.

Awards
•    Prize “Ciutat de Barcelona” 2018.
•    Prize on Built Construction in Architecture at the BBConstrumat 2019.
•    Nominated at the Début Award Lisbon Triennale (announced October 5th 2019).
•    Mention at the Bonaplata 2018 awards for a study on the industrial heritage of Vilassar de Mar.
•    Prize AJAC for the housing coop project “Coop de falç”, together with Arqbag.