In February this year we announced the calling of the international competition of the "Observatorio Panamericano." A few months later, in September brought a summary of the winning projects, which may participate in the negotiation table to define the development and implementation of the same. Now, in detail, one of the best ideas, by the Estudio SPN. Congratulations to the team! 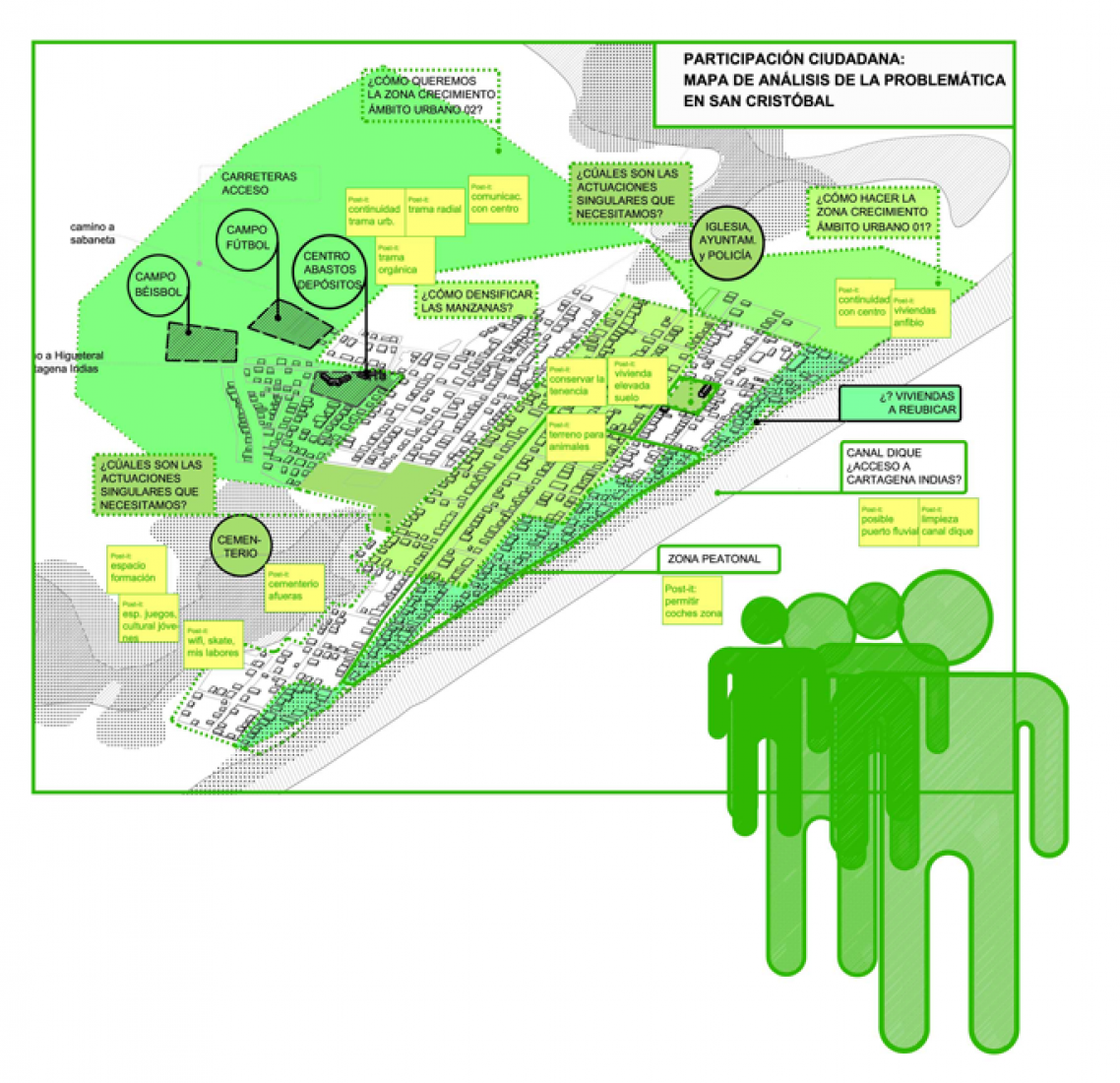 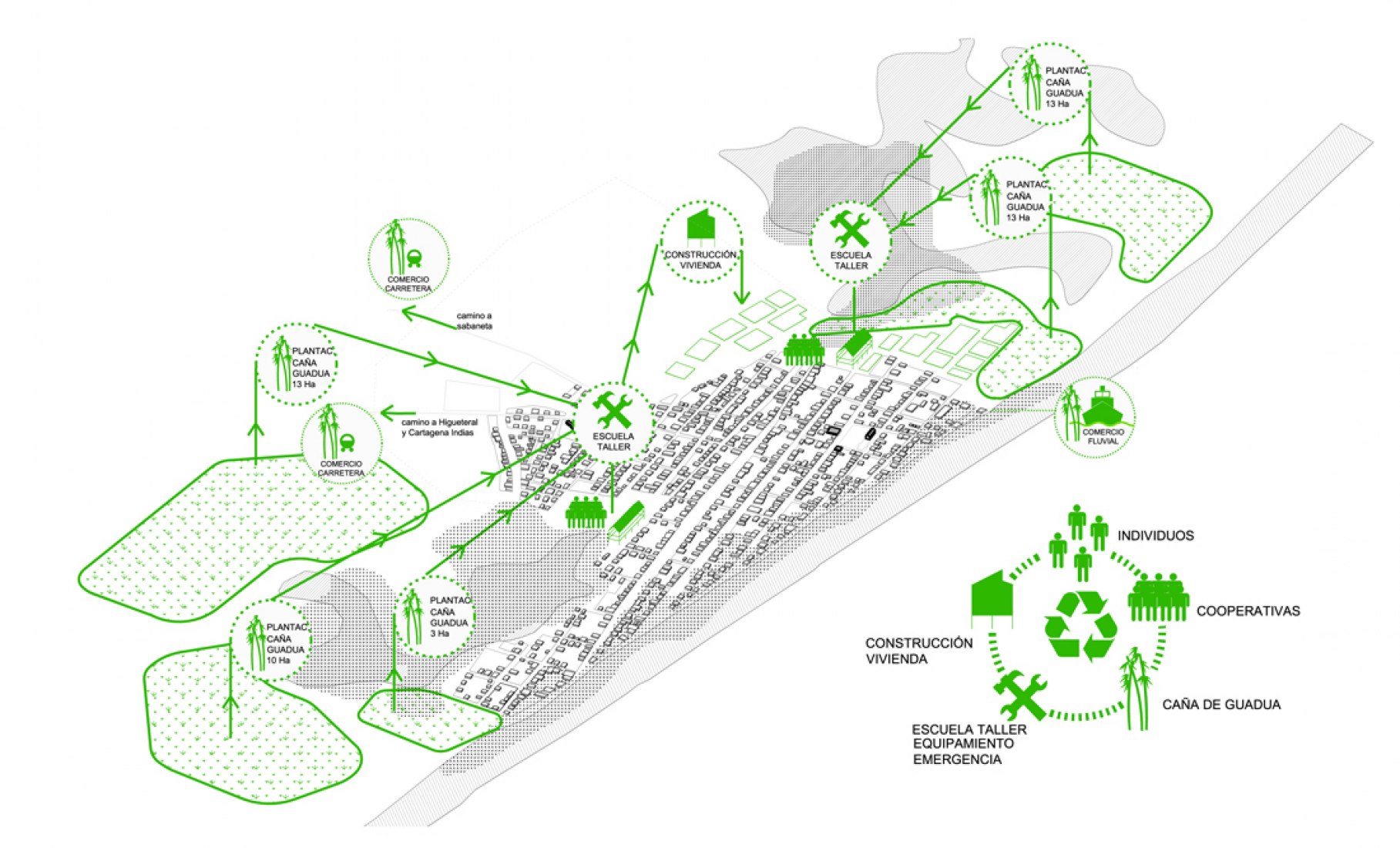 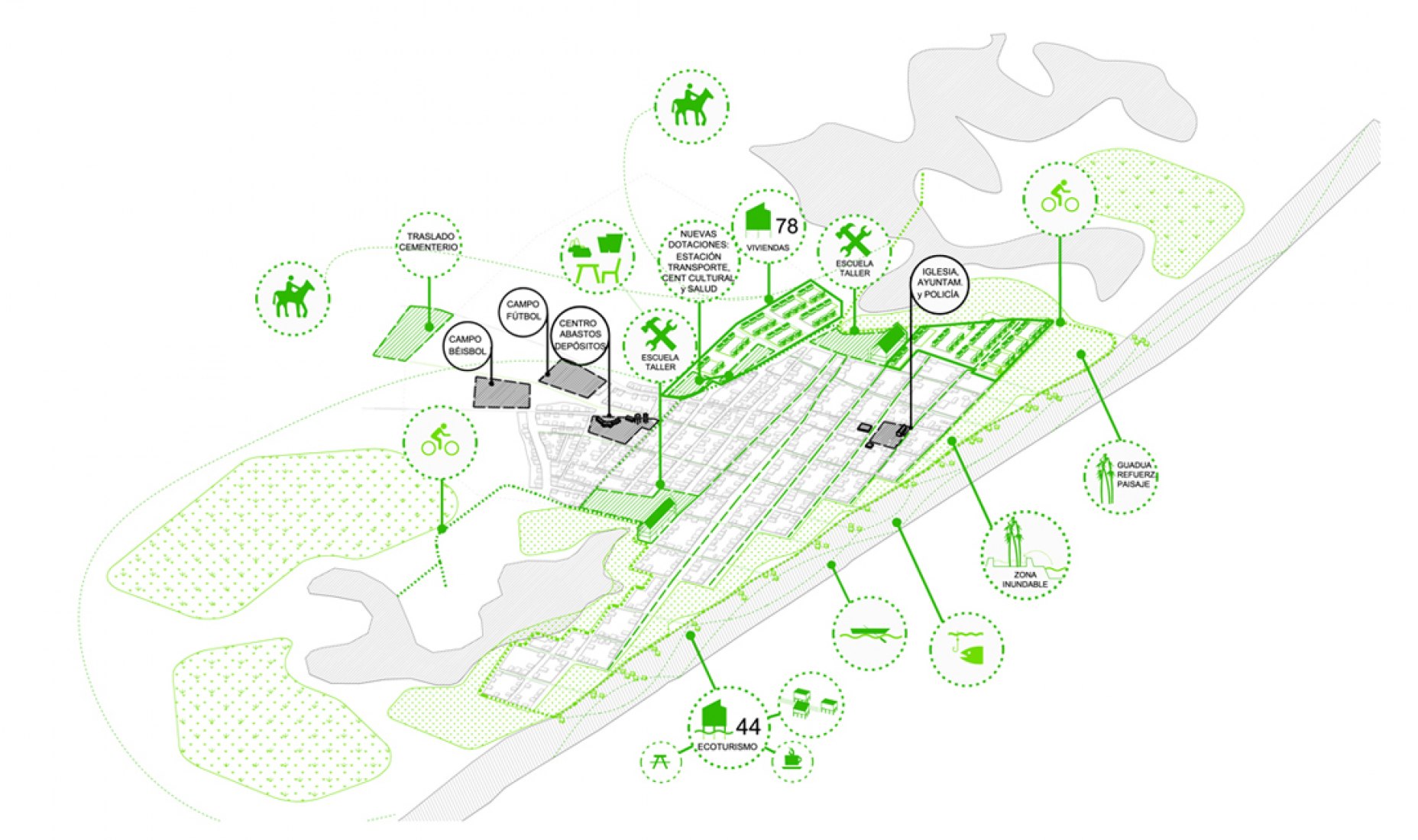 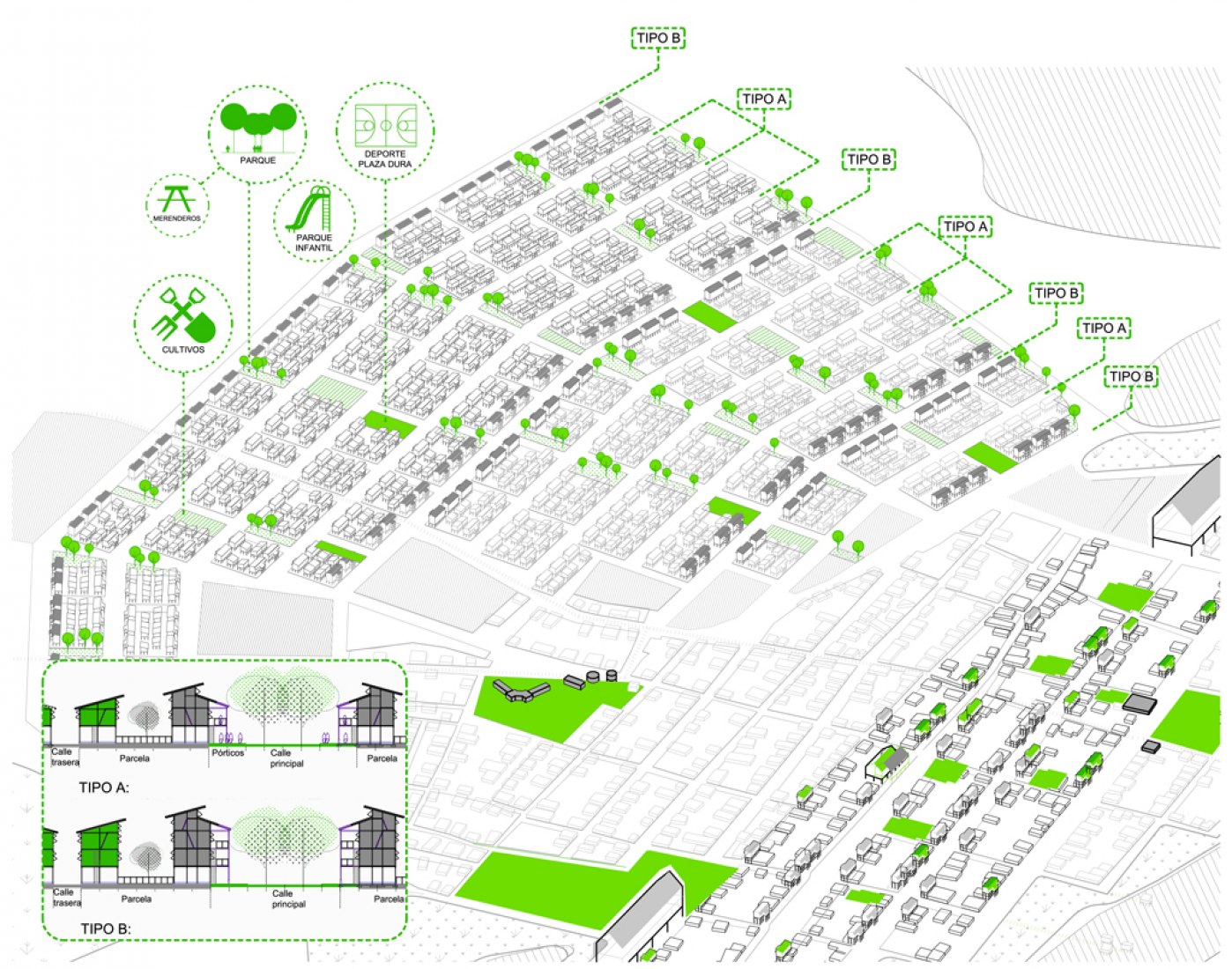 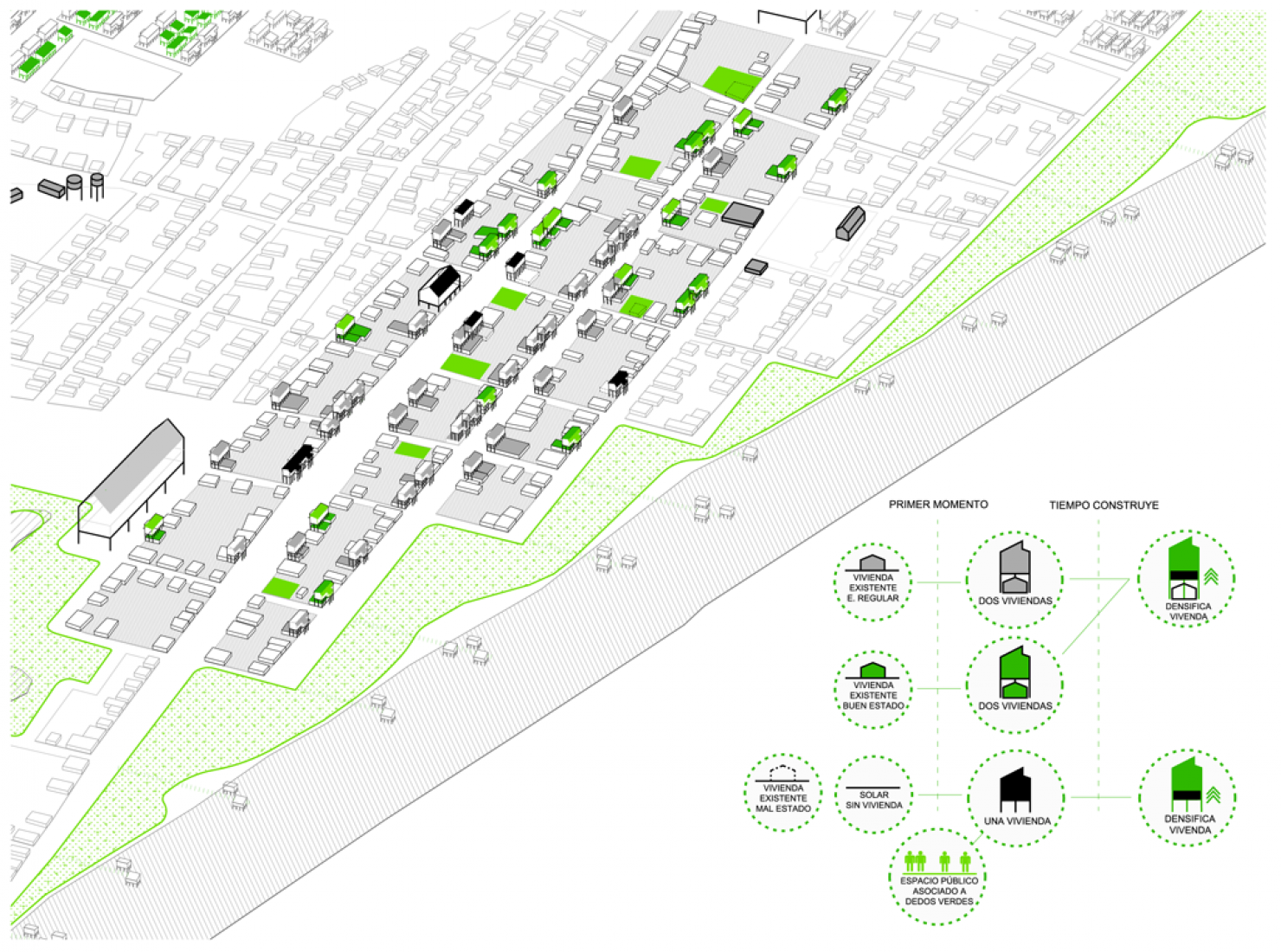 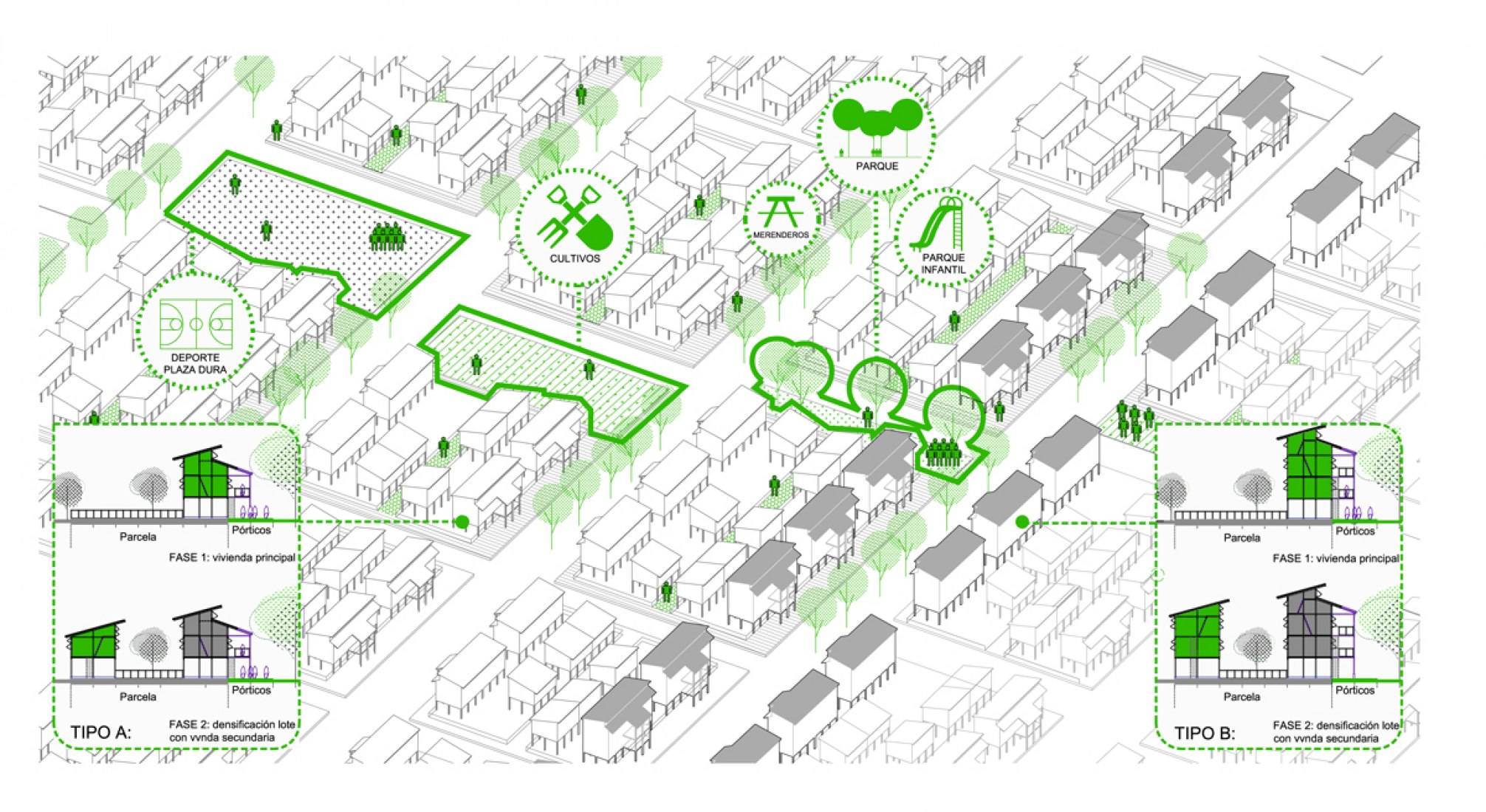 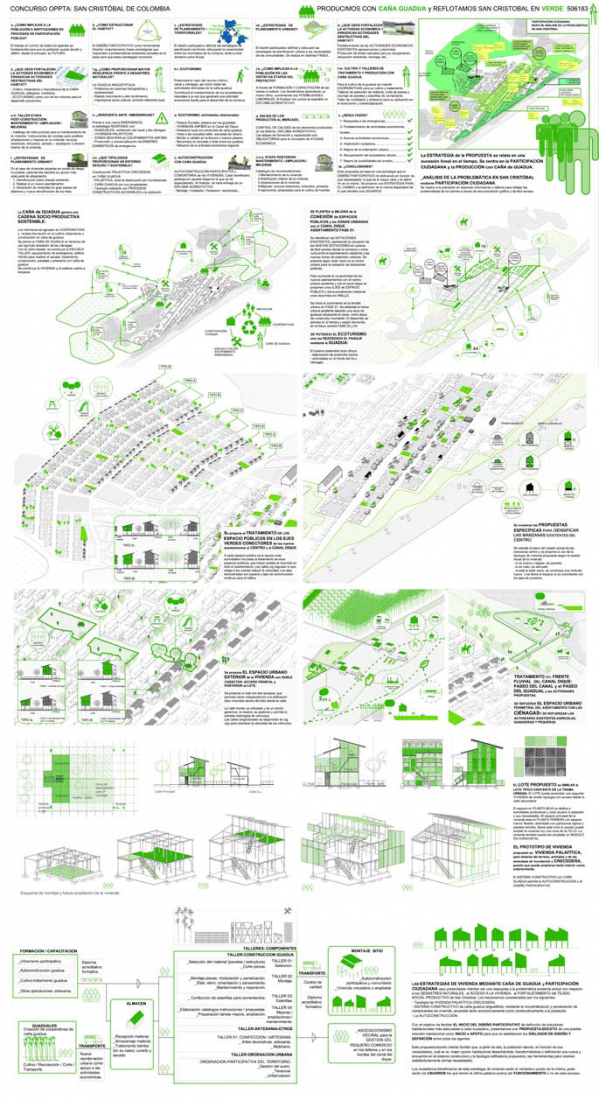 Board. Emergency Interventions at San Cristóbal, Colombia. By Estudio SPN.

The proposal responds to a number of issues raised after declaring the state of emergency in the area of  San Cristóbal, Colombia. The strategy aims to achieve the economical, environmental and social development of San Cristóbal and its region improving the quality of life of its inhabitants.

The use of guadua cane (bamboo) and the participatory design tools are the main ideas to improve, strengthen and recover the three ecologies,

- Economical Ecology, strengthening the existing economical activities and promoting new ones resulting from the use of bamboo, such as traditional crafts, ecotourism, etc..
- Environmental Ecology, improving the response to natural disasters by means of bamboo and biodiversity recovering plans.
- Social Ecology, involving the population in the decision-making process, improving the living conditions of the dwellings and creating new public spaces.

This development is planned in five main stages in time:

Second Stage: Cooperatives + bamboo plantations + training:
The population set up cooperatives to farm, produce and commercialize bamboo. To do so, they plant along the banks of the Dique canal and swamps. The new planting will contain the ground, promote the landscape and boost ecotourism and outdoor activities. Bamboo Training Centres are built to train the local people.

Third Stage: Participatory Design in the urban development.
It is expected,
- To plan the urban development by stages starting with the relocation of the families living in the flood risk areas. The first stage will aim to densify and to fluff up the village centre and to extend the housing area towards the edges of the urban limits. In the second and third stages, the housing area will be extended further out following a radial sequence at the time that the first stage and centre areas are consolidated.
- To improve the urban connections of the new areas with Dique canal and the village center allocating new public buildings and green areas in long axis perpendicular to the canal and “ring” areas around the town.
- To divide the new town areas in different private plots. The suggested plot dimensions are similar to the existing urban fabric. The proposed houses will initially be semi-detached sharing the wet core areas with the possibility to extend and become row houses. The plot will have two accesses, a main and a rear one, the initial house will be located at the front of the main road and the second one could be built facing the rear street if it becomes the necessary.

Fourth Stage: Dwelling self construction.
The type of dwelling which fits best regarding self-construction techniques, the needs of the people and the tropical climate would be constructed using bamboo, on stilts and with the possibility to grow and adapt to the users. The ground floor is initially a covered area with the potential to promote different productive activities. Up in the first floor, the house presents a porch as a external protected area and long eaves to  protect from the sun and the rain. The interior of the house is flexible, divided by light bamboo partitions. The facades of the house are customized by the owner using prefabricated panels produced in the Training Centres.

Fifth Stage: Post- construction stage to improve, extend or maintain the constructions, to be done by the dwelling owners or builders with appropriate training.

The smooth running of the Project demands the involvement of the public entities (Ref: Joan McDonald) for people to become confident in the use of bamboo. The construction of the new public buildings with this material will contribute to increase its use and its acceptance by the population.

In order to facilitate the process of participatory urban and dwelling design, the idea is to present a sketch proposal to initiate the conversations among the involved agents. From this starting point, people will decide which one is their dwelling design option, dropping it, transforming it or defining a new one having acquired the construction abilities, knowing more about the building typology and will have the adequate tools to define their needs. The beneficiary villagers will be the real jury of this proposal, due to that they are the ones who have the last word about the use or not use of this process. 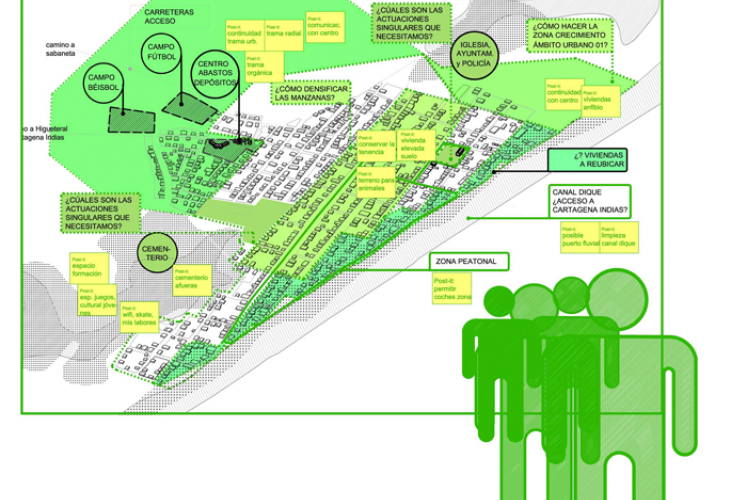 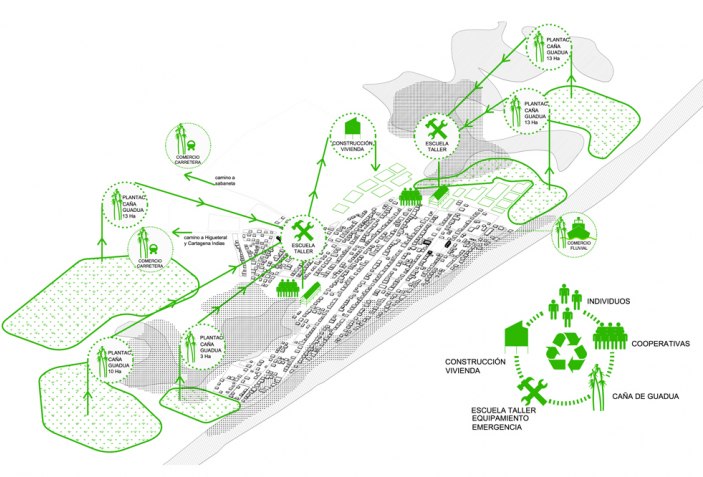 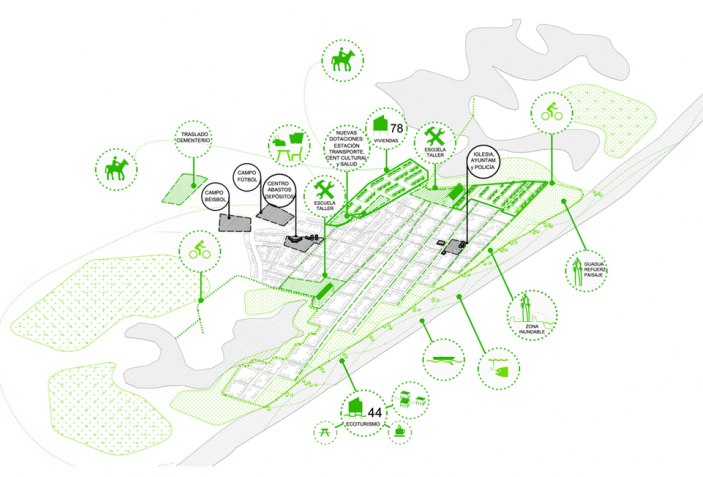 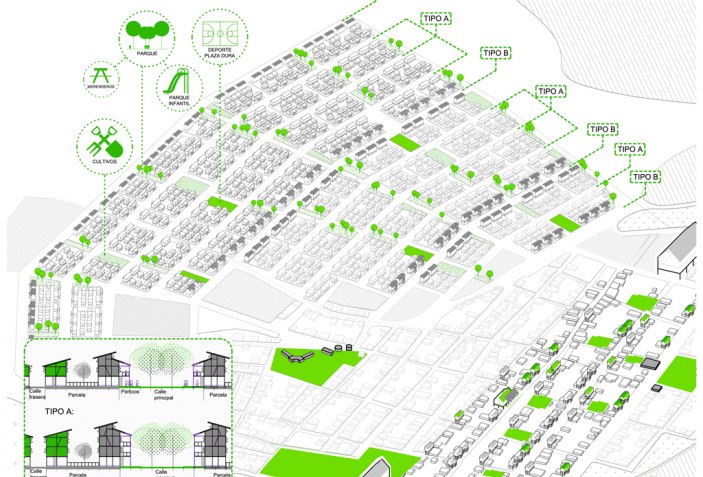 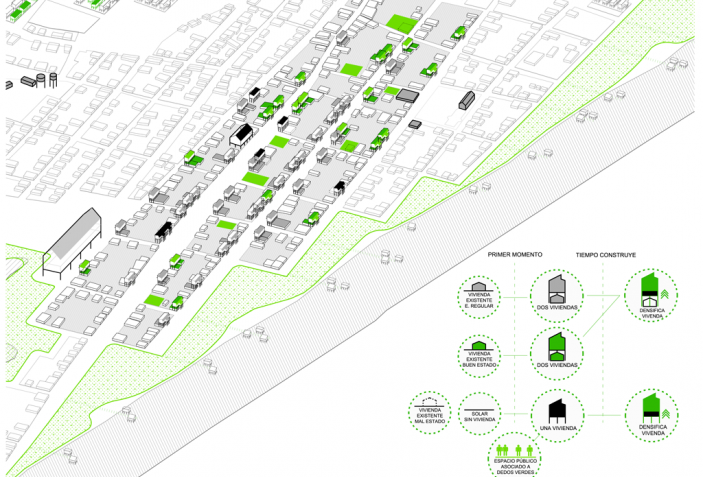 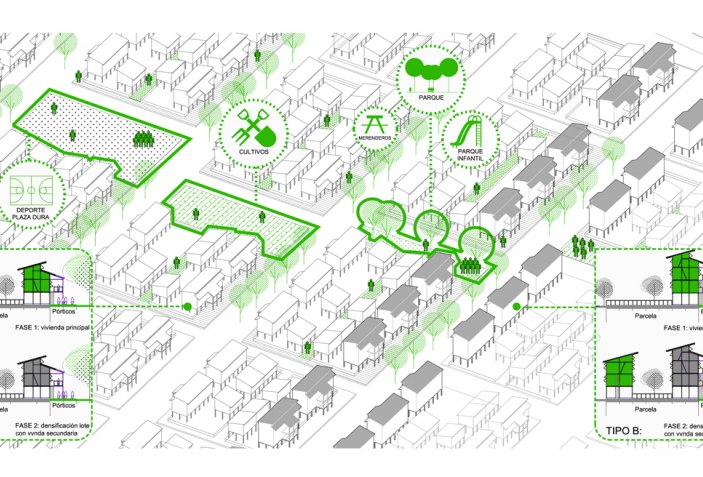 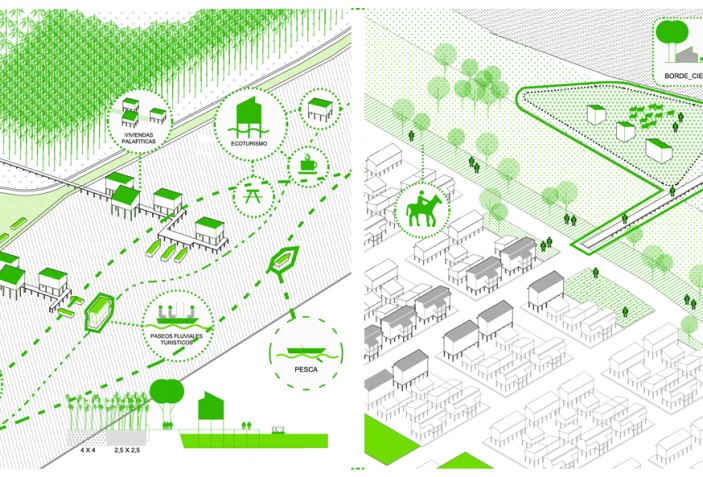 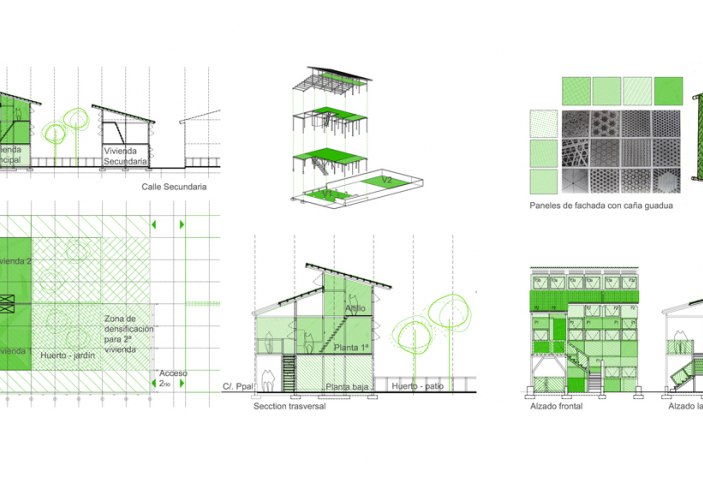 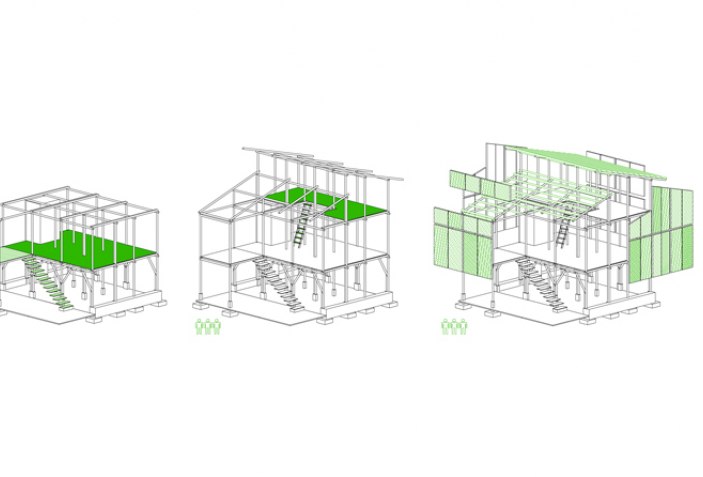 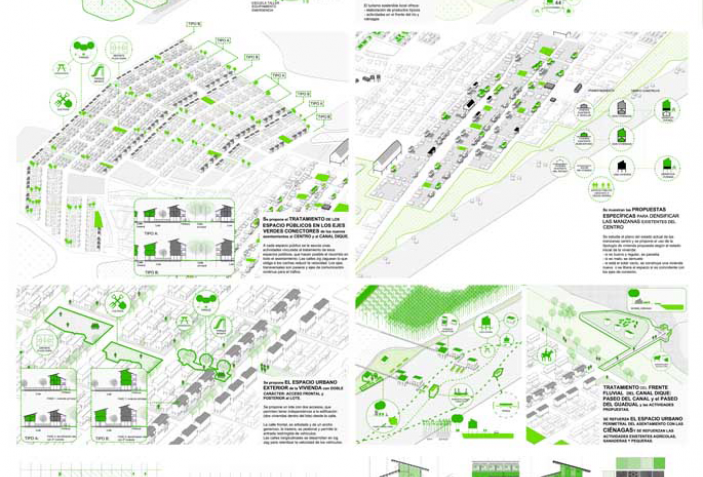 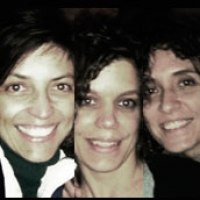 SPN team. Formed by Juana Canet, Rut Cuenca and Elena Gómez, architects graduated from ETSAM-UPM. They have combined international experience in a broad range of projects and competitions. In parallel to this they also teach in different architectural schools. In 2011 they specialized in “Cooperation and development of human settlements in third world countries” at the Unesco Department-UPM. They worked together researching the use of bamboo applied to “Improved vernacular housing typologies in Ecuador". Their interest focuses on the use of bamboo as a sustainable construction material driving the development of local communities and aiming to find low cost housing solutions for impoverished areas and urban regeneration from a multidisciplinary and participative approach. This lead them to join the Emergency Interventions International Competition, "How to manage integral development of an area affected by floods due to climate change in San Cristobal, Colombia" (OPPTA Sept.2012), winning the First Prize. 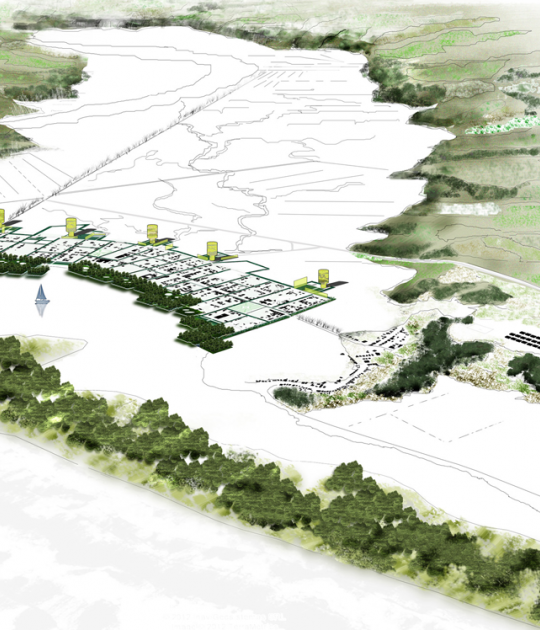 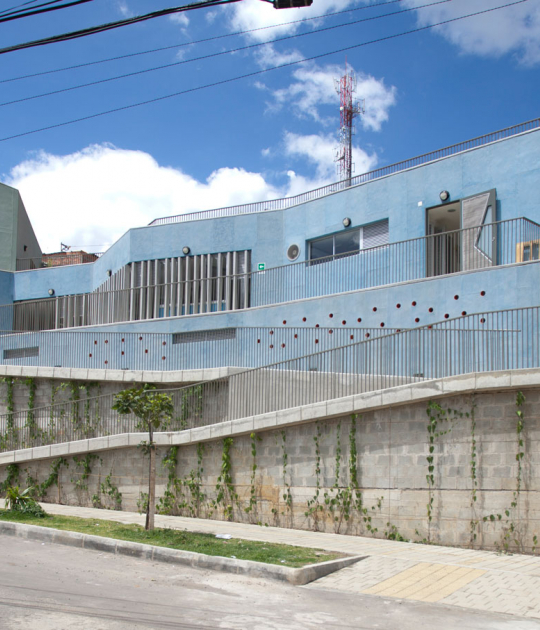 estudio.entresitio and MGP, win in the National Museum of Memory in Colombia