Heatherwick Studio has begun construction on the redevelopment of the Tarnomon-Azabudai district of Tokyo. The project is due to complete in March 2023 and it is Heatherwick Studio’s first project in Japan. Around twenty-five to thirty million people per year are expected to visit the area. 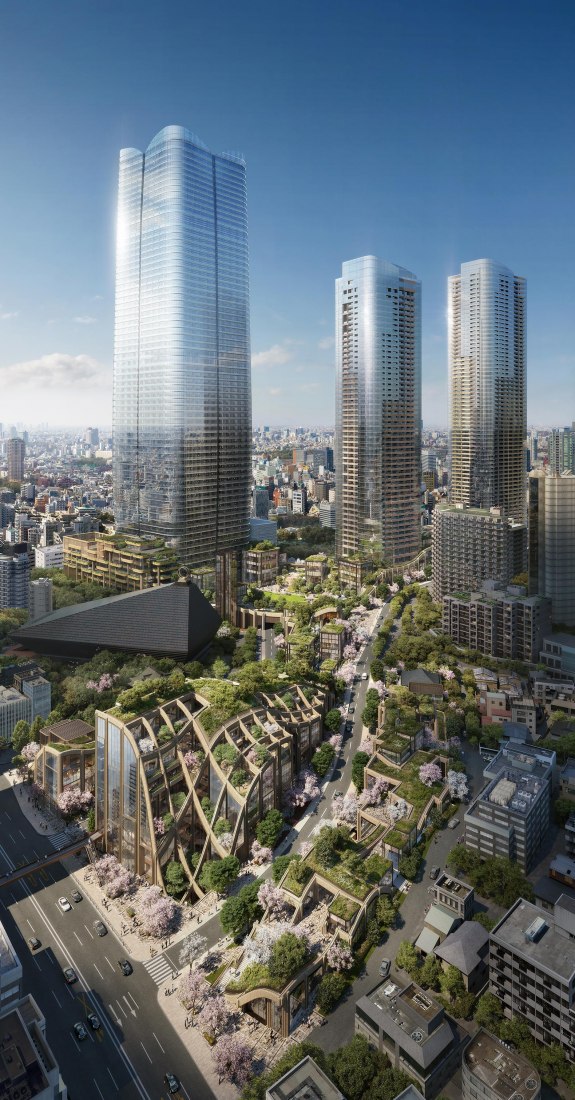 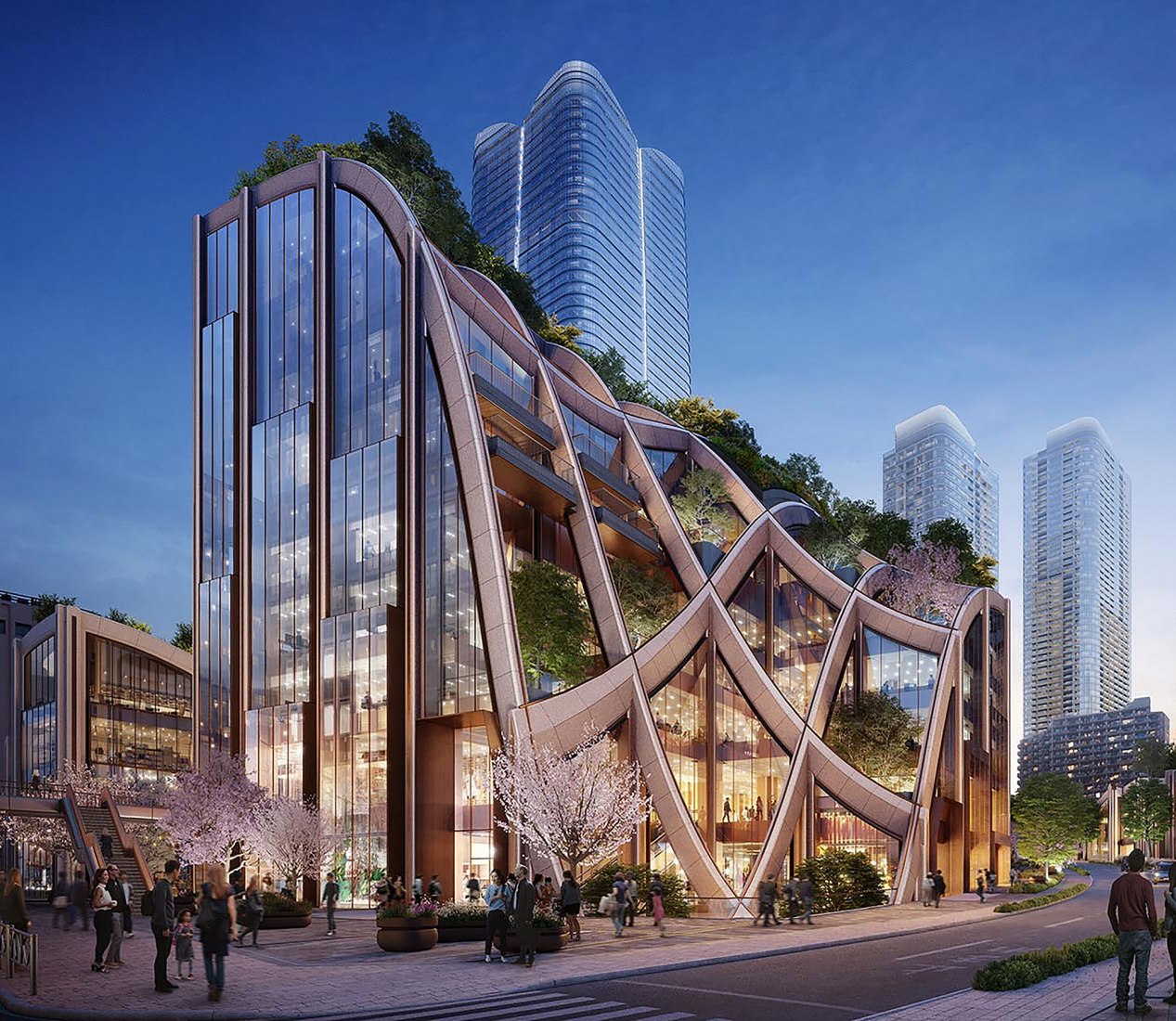 Visualisation of the east side of Toranomon-Azabudai, Tokyo. Image © Heatherwick Studio/DBox for Mori Building. 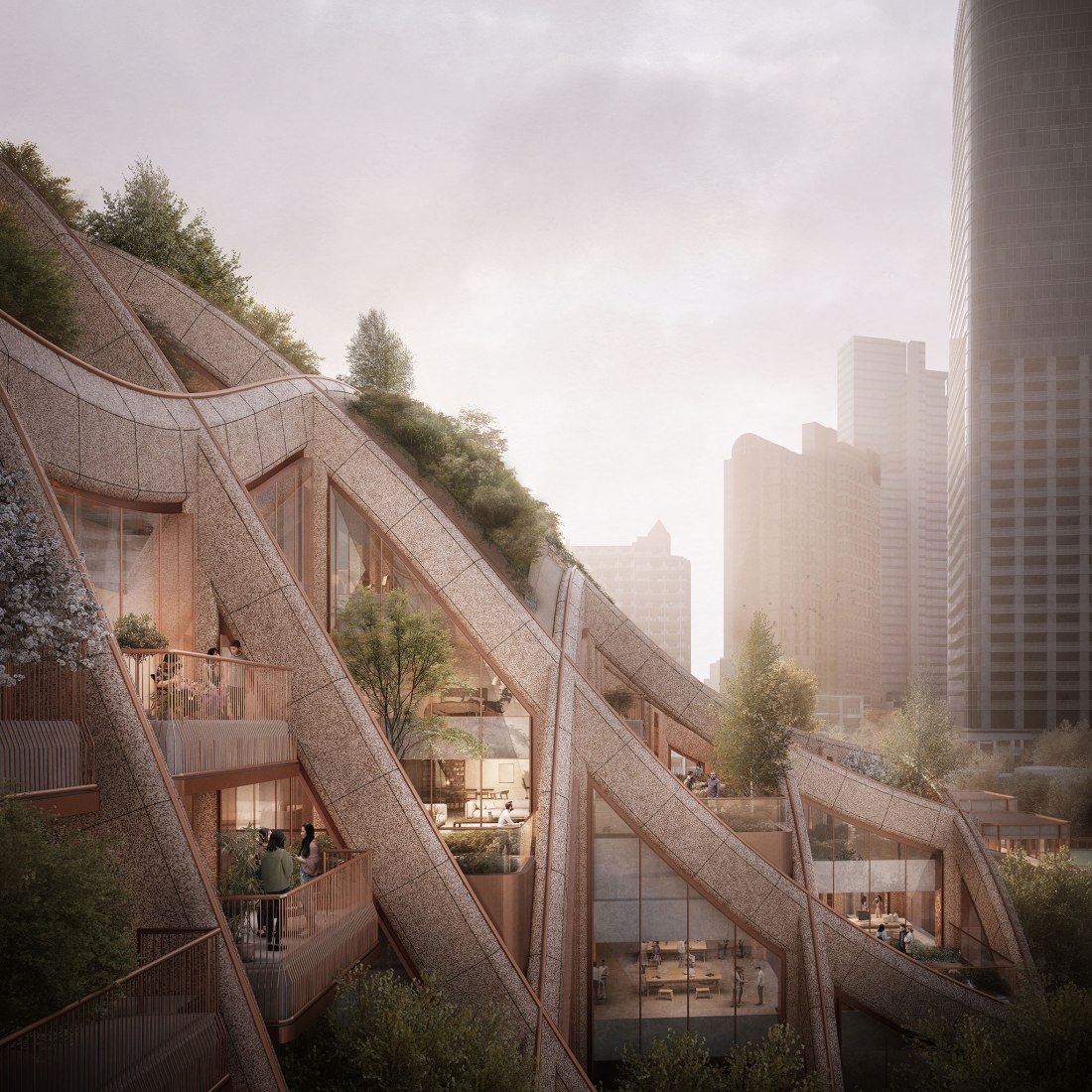 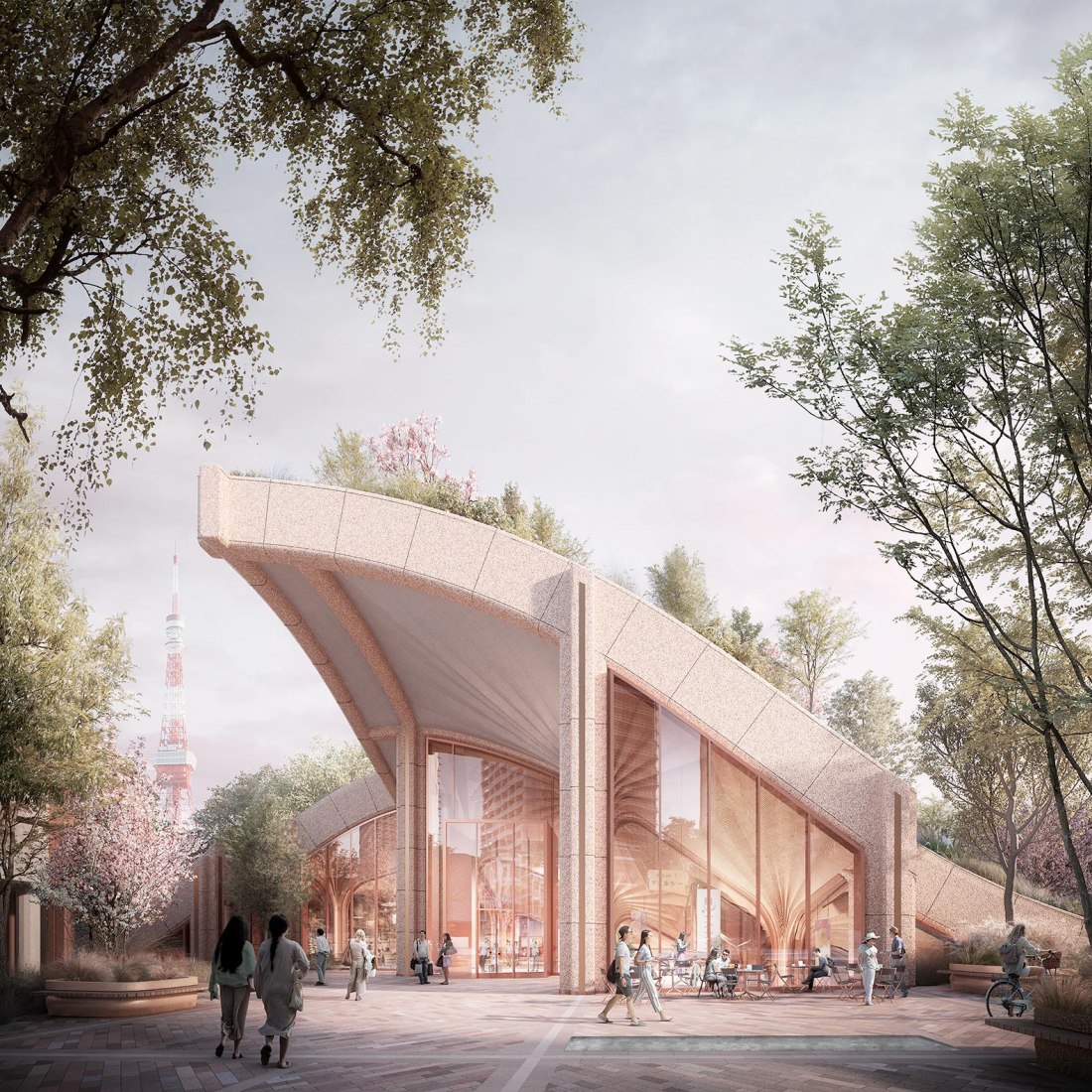 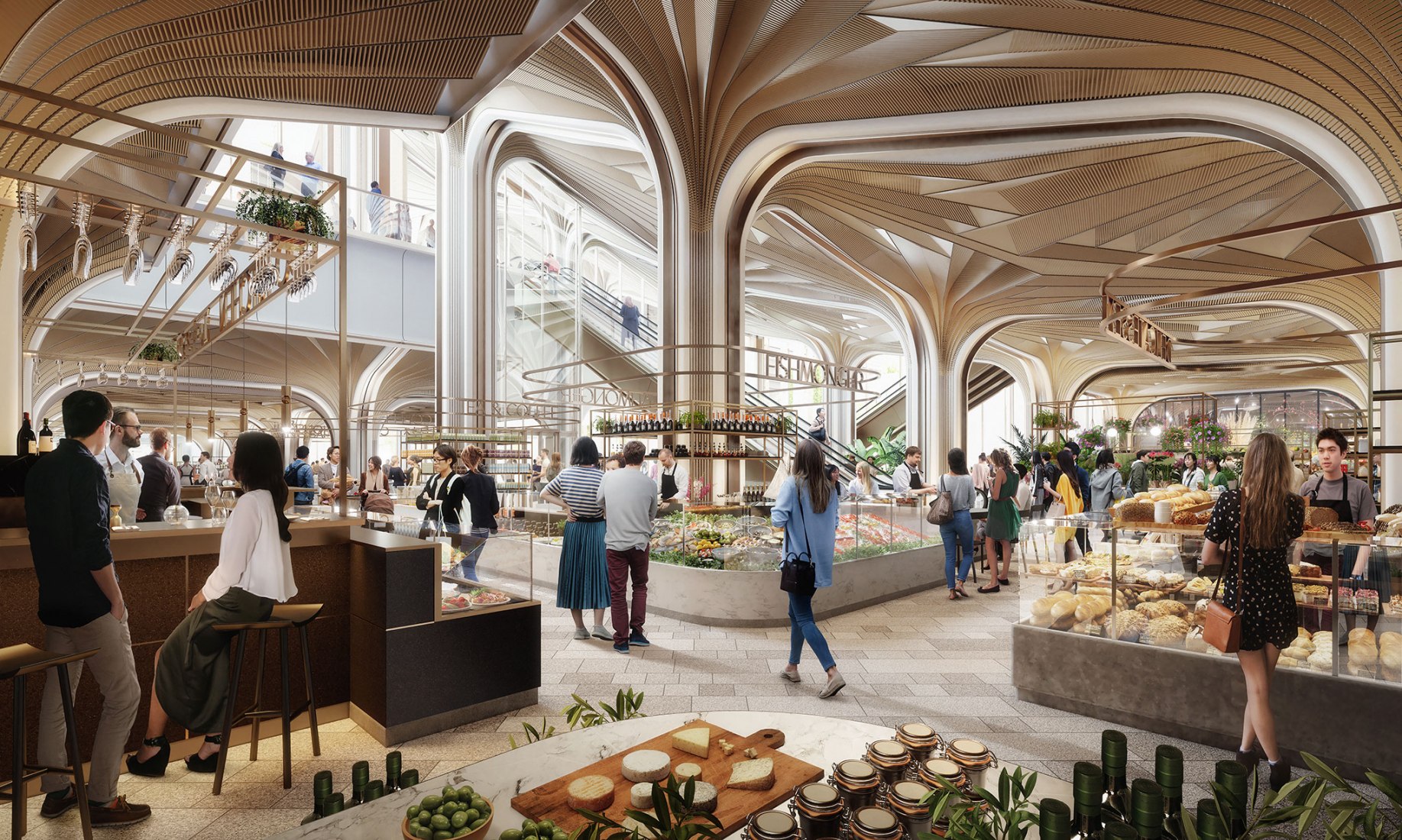 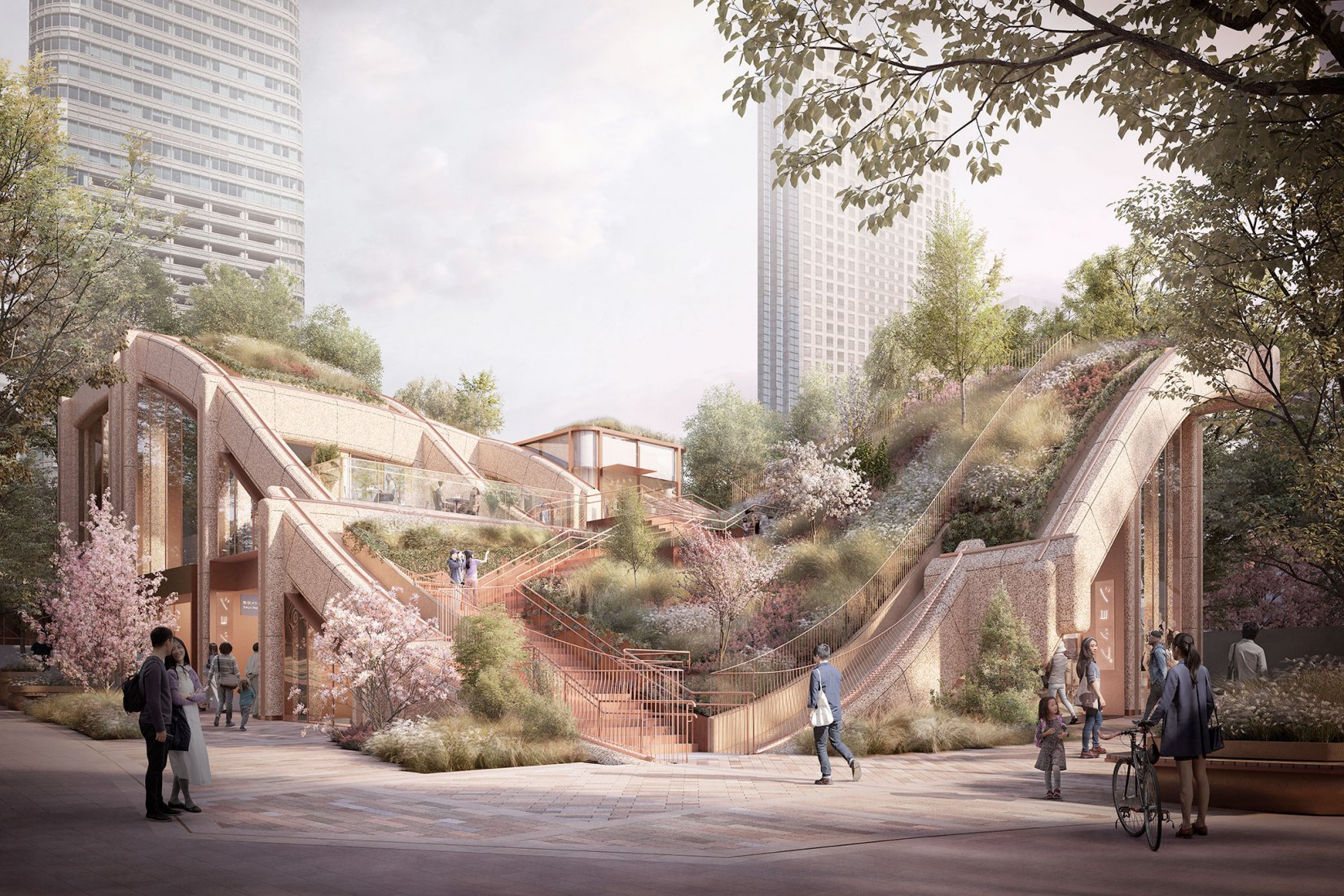 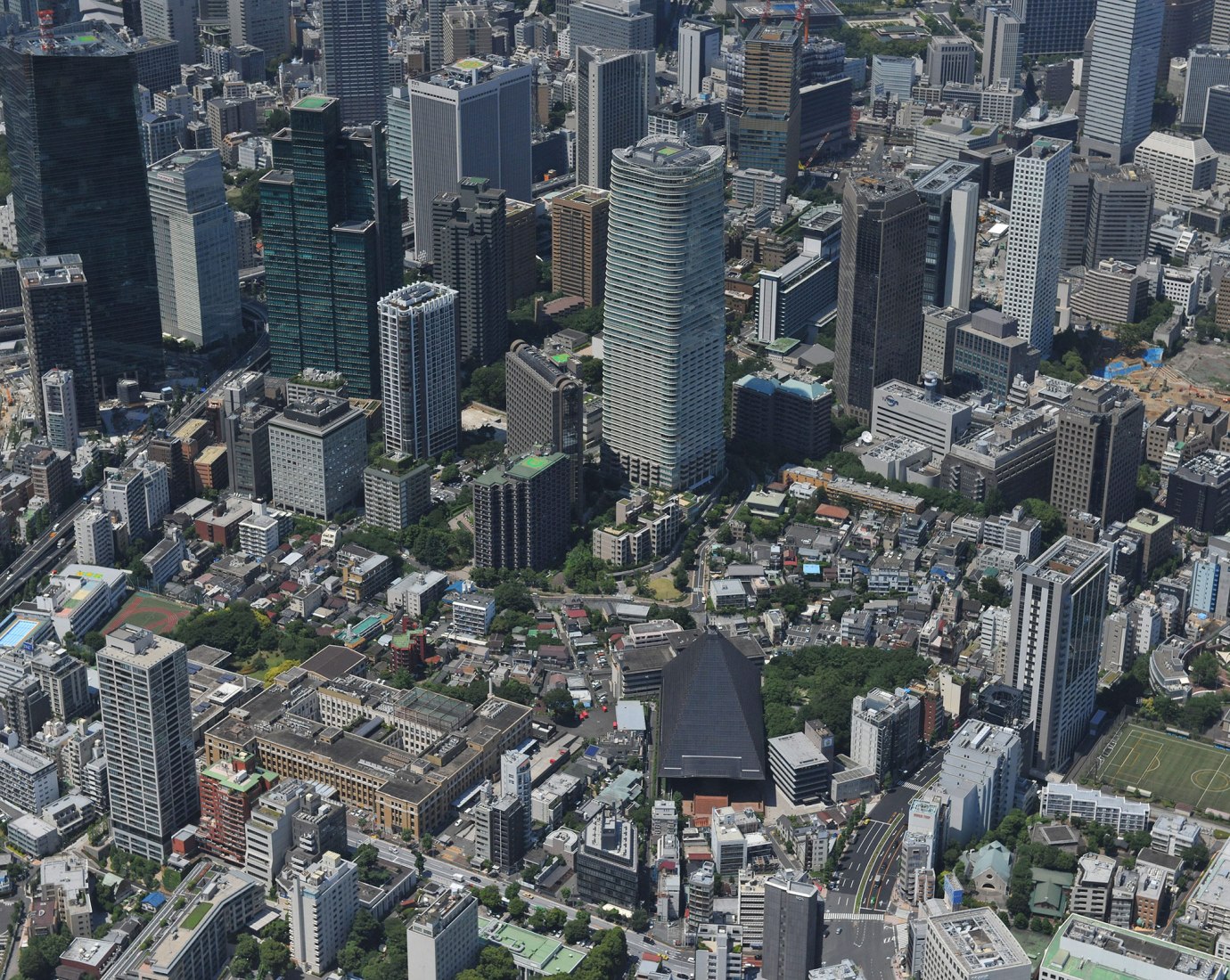 Situated in the Minato City of Tokyo, Heatherwick Studio has designed the public realm and lower-level podium architecture, landscaping and retail for the site which includes a generous 6,000m² central landscaped square. The design includes a mix of office, residential, retail, a school and a temple, "all set within a new vibrant piece of urban topography to achieve Mori Building Company’s ambition of creating an exceptional public district for the city."

“It’s been very exciting working on the Toranomon-Azabudai project and much of our effort has been focused on designing the public spaces that everyone will experience when they spend time in this new area. As many new developments around the world can be harsh and sterile we wondered if we could provide a more human-centered alternative by integrating surprisingly intense quantities of planting and greenery.

As a way of combining an architectural construction system with significant amounts of nature we developed the idea of a garden pergola scaled up to district size. This concept has allowed us to bring an overarching logic to an eight-hectare piece of Tokyo whilst also making space for facilities such as housing, shops, hotels, spas, a school and a temple within the sections framed by the grid.”
Thomas Heatherwick about project.
“It’s been a remarkable period over the last four years to work with Mori Building Company, to create this new part of Tokyo – going beyond the norms of typical large mixed-use developments to create something meaningfully embedded within the city.

Our design for the project responds to the layering of Tokyo; the juxtapositions of scale and the character of buildings that draw the eye upwards. Set within a natural valley, we have chosen to accentuate that topography through our design, creating an undulating arrangement that uses a pergola-like structural system to create a variety of landscape spaces, from hidden gardens to sunken courtyards. Weaving and flowing through the scheme, a family of pavilions emerges from the grid of the pergola. Rather than focus on one single impression, we hope to encourage exploration by creating hundreds of moments to be revealed and discovered.”
Group Leader at Heatherwick Studio, Neil Hubbard.

Construction has begun on an innovative redevelopment of the Toranomon-Azabudai district of Tokyo. A ground-breaking ceremony was held on August 5 2019 and the project is due to complete in March 2023. It is Heatherwick Studio’s first project in Japan to go into construction.

Situated in the Minato City of Tokyo, the studio has designed the public realm and lower-level podium architecture, landscaping and retail for the site which includes a generous 6,000m² central landscaped square. Overall, the scheme includes a mix of office, residential, retail, a school and a temple, all set within a new vibrant piece of urban topography to achieve Mori Building Company’s ambition of creating an exceptional public district for the city. Around twenty-five to thirty million people per year are expected to visit the area.

Working with a complicated, irregular-shaped plot spanning more than eight hectares, the studio has sought to bring harmony and to create a distinctive identity that is particular to Tokyo. The team devised a pergola-like system scaled up to district proportions to organise and unify many different elements of various sizes. In this way, the design allows for significant green space both at ground level and climbing up the podium buildings, without sacrificing connectivity to the ground. Echoing the natural forms of the project’s valley setting, the undulating structure rises like a gently sloping hillside before puncturing the ground to allow natural light to pour deep into the basement retail zones.

Traditional Japanese crafts have also been referenced such as the Edo kiriko glass etching technique to ensure the project feels distinctively Tokyo from even the smallest, human-scale details. 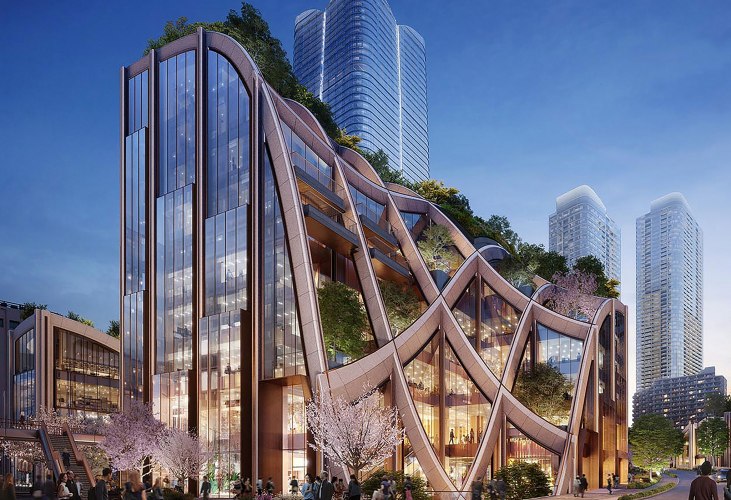 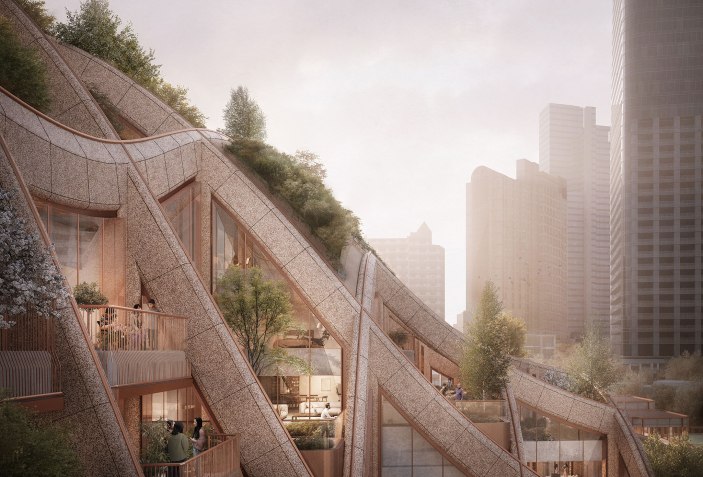 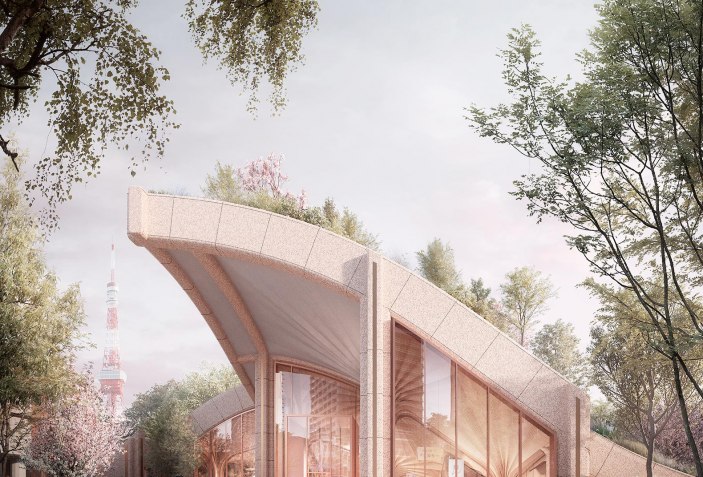 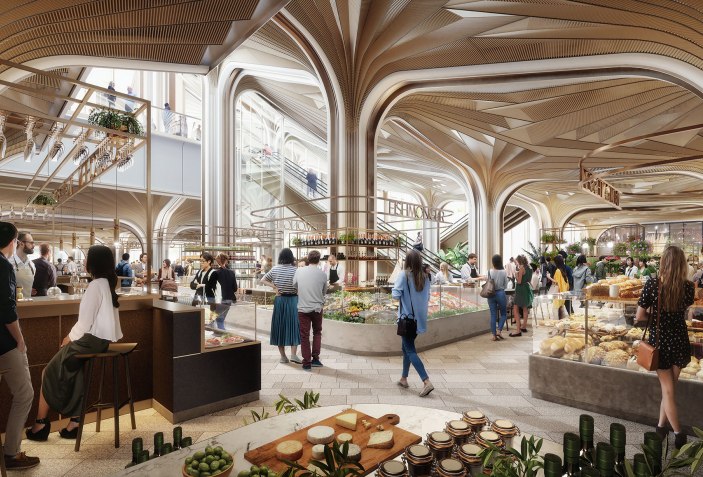 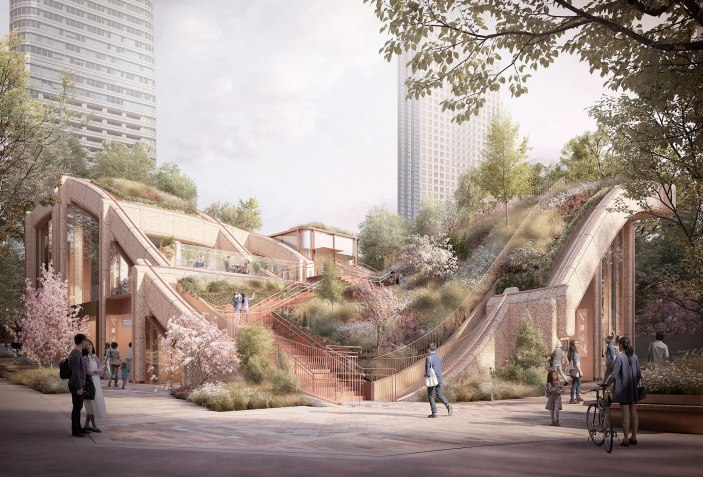 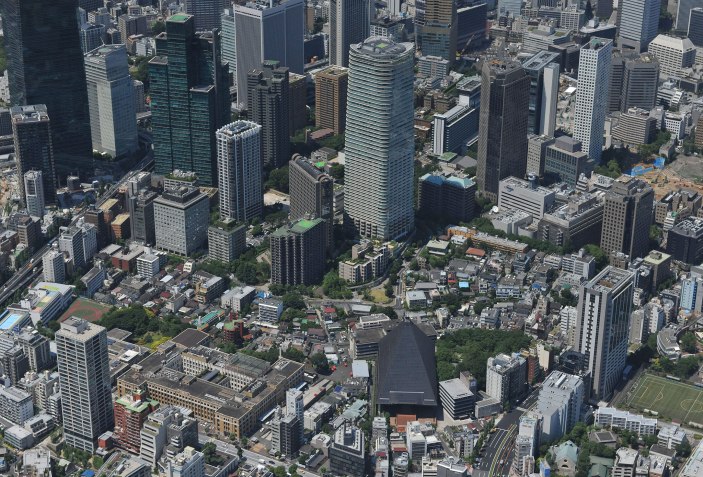 Height of Pergola
43m, 6 floors below ground, 7 floors above ground 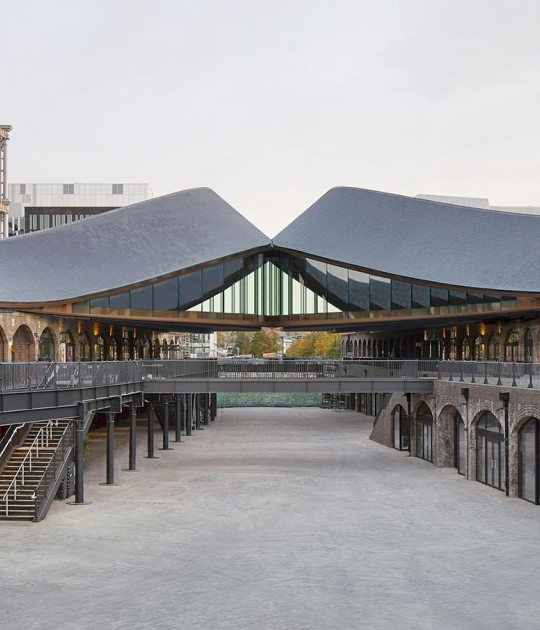 Coal Drops Yard in King’s Cross, by Heatherwick Studio opens to the public 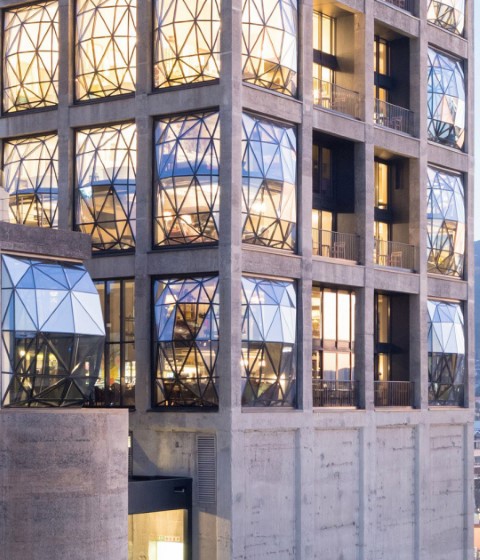 Opening. Zeitz MOCAA, like a vaulted cathedral, by Thomas Heatherwick 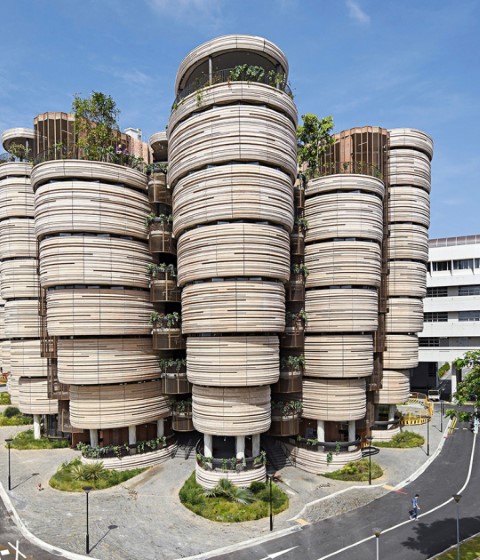 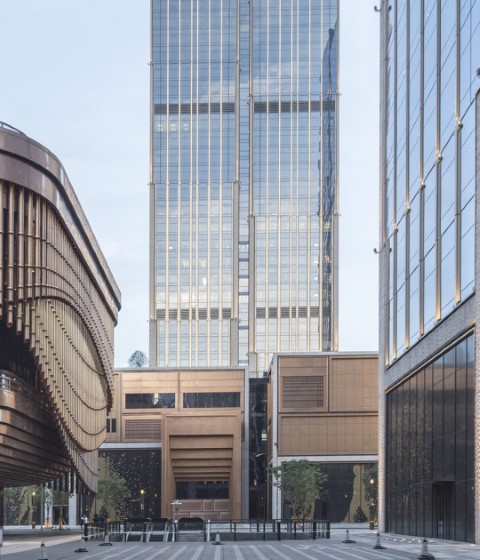 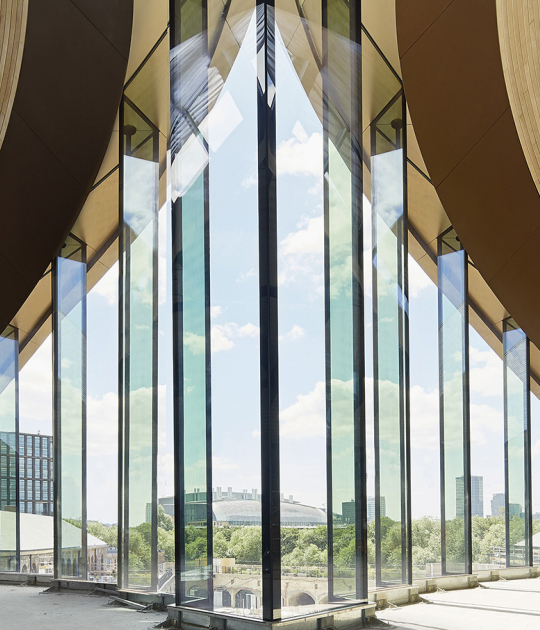 Near completed, Coal Drops Yard in King’s Cross, by Heatherwick Studio. Opening to the public on October 2018