Civil engineering company Anta and Agence TER Landscape Architects designed this footbridge in San Sebastian, Spain. Located over the River Urumea, Riberas de Loyola Footbridge means a new connection between the city on one side of the river and the natural environment of the park on the opposite bank. A good example of subtle, careful and well-thought-out design. 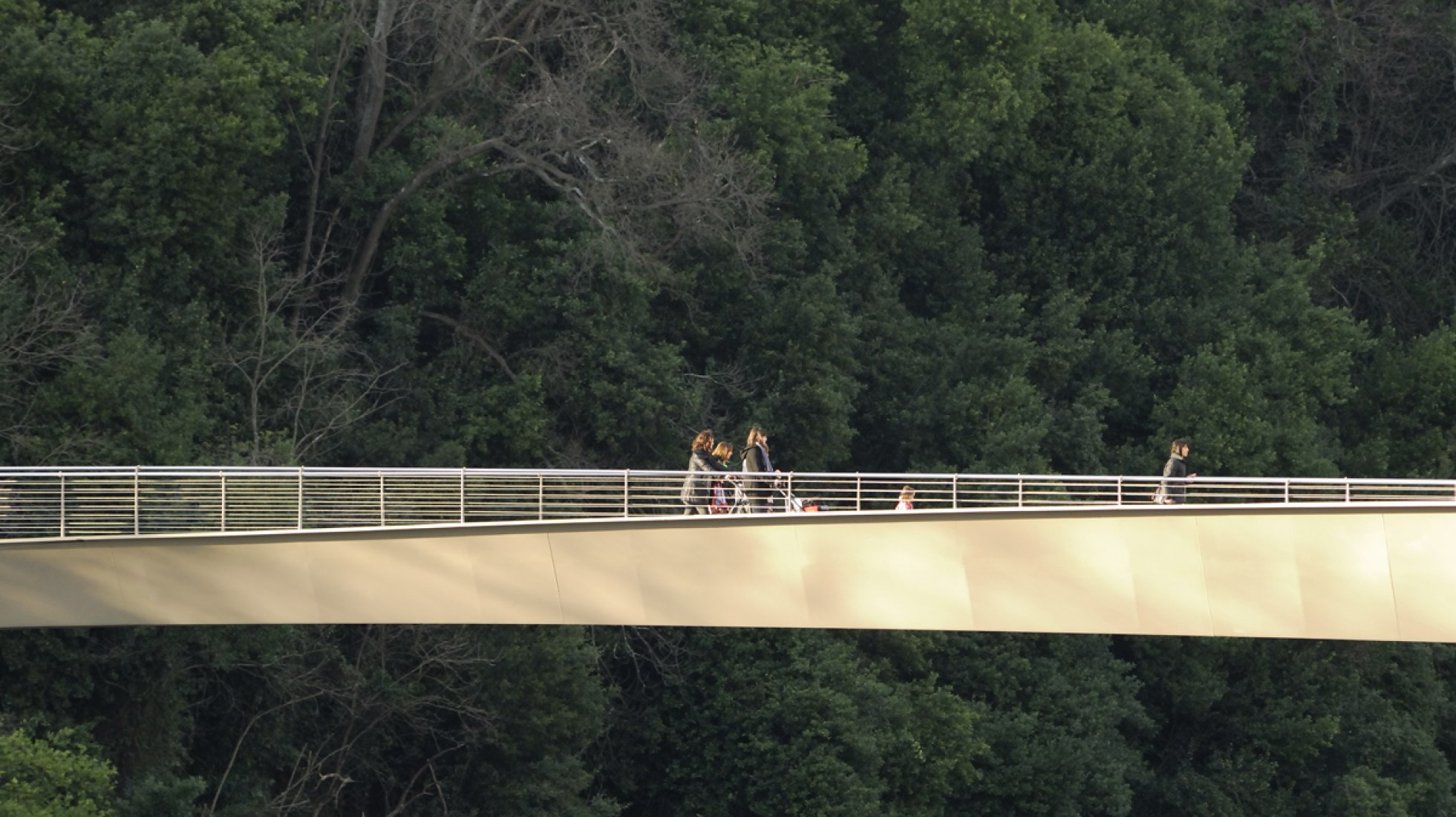 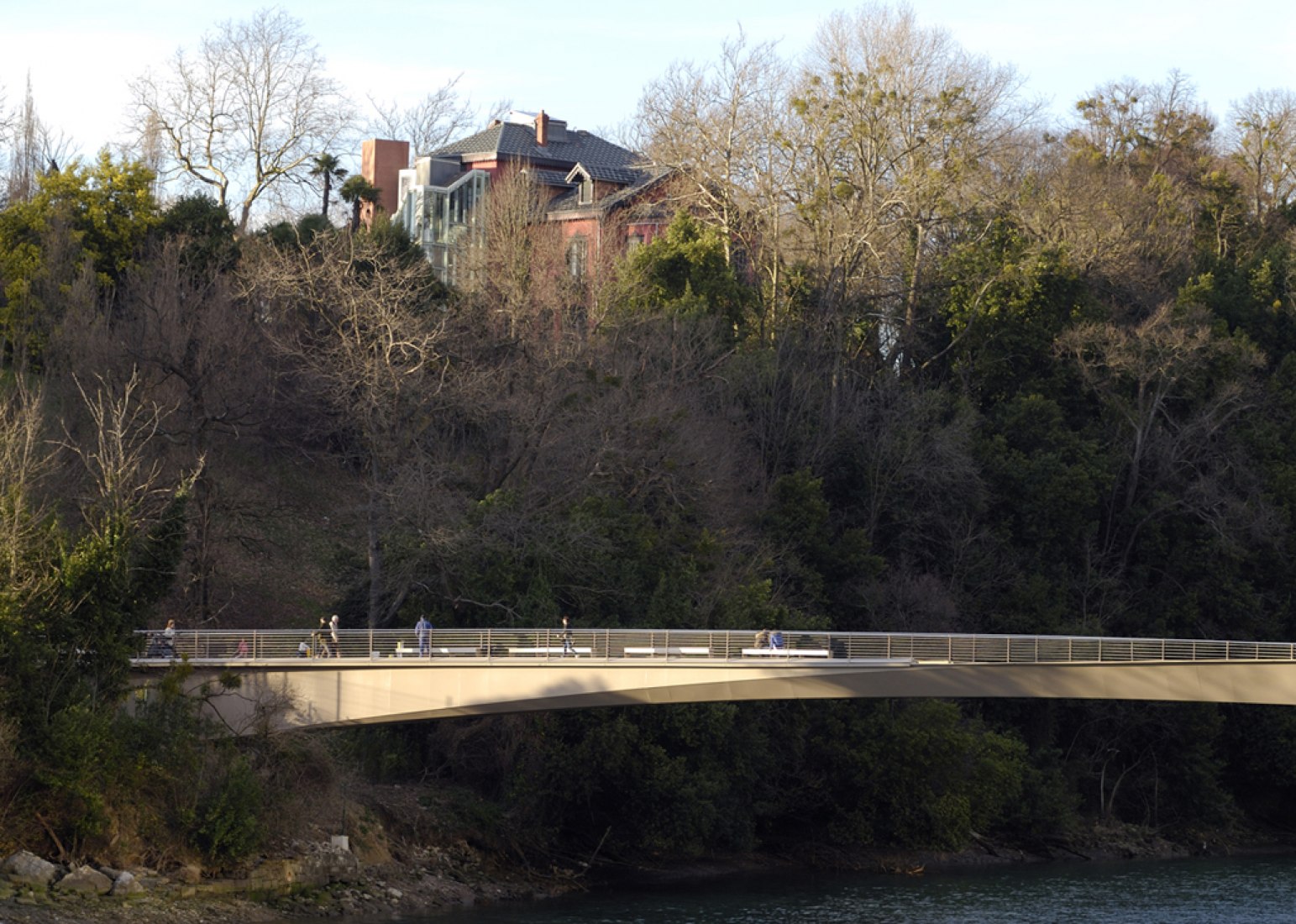 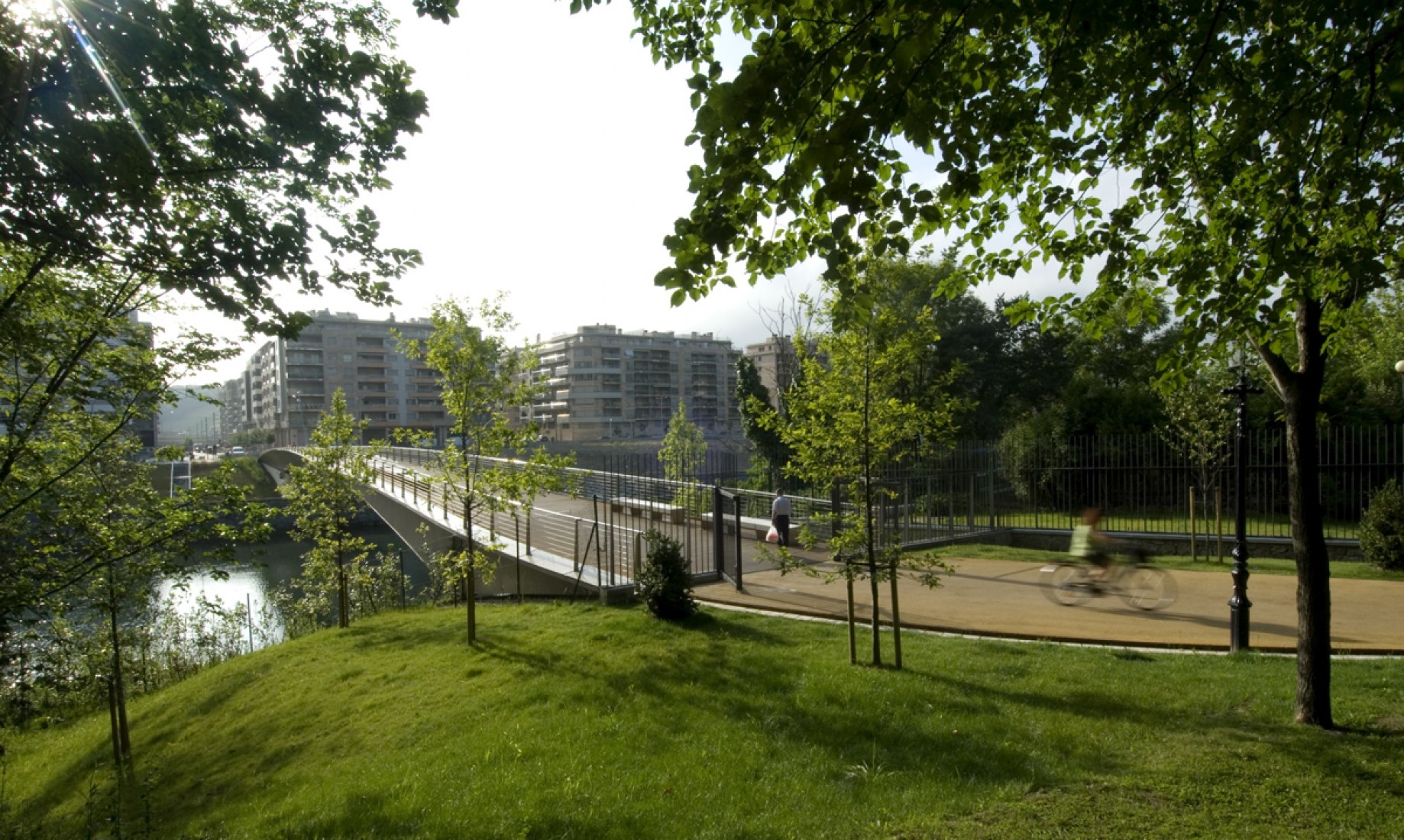 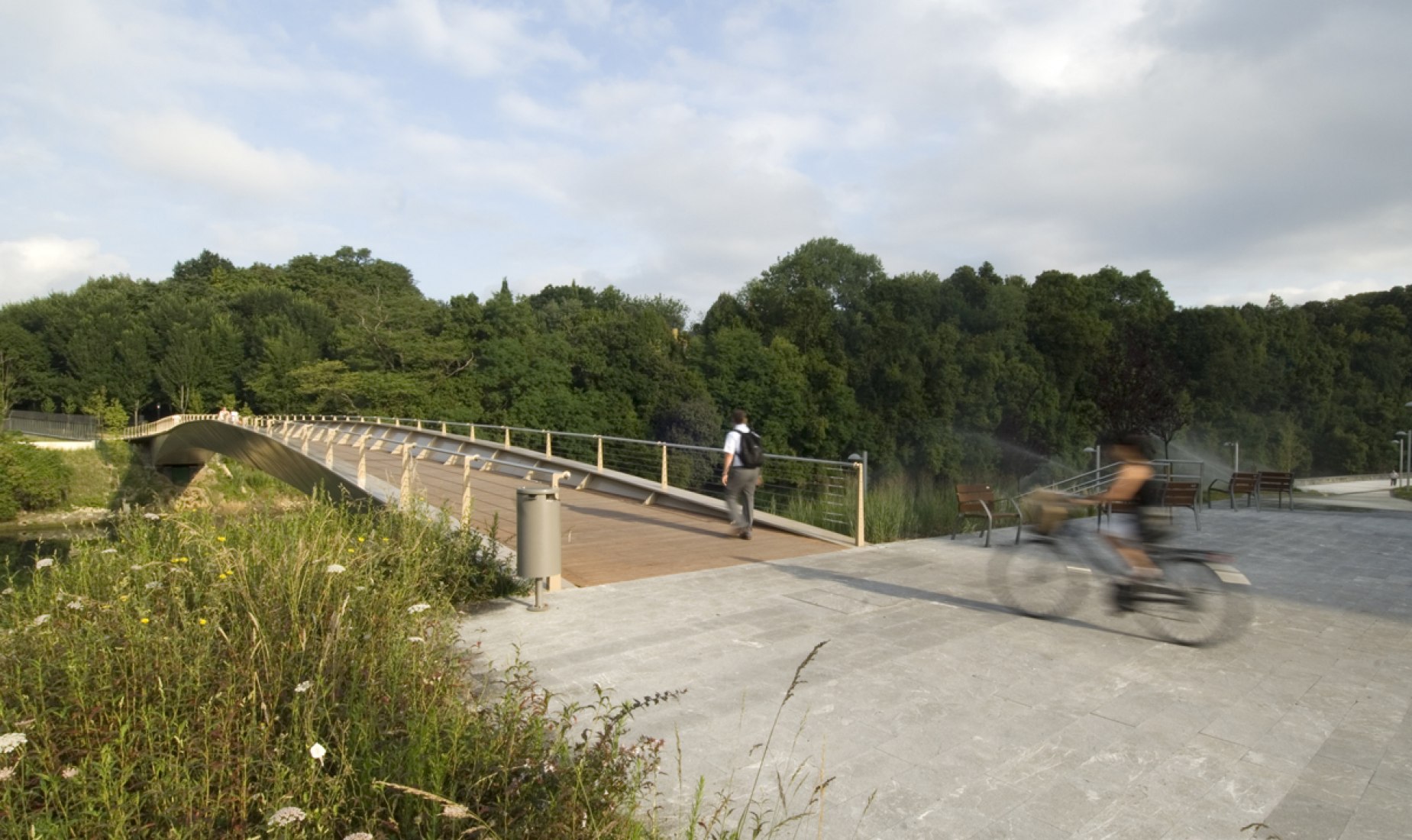 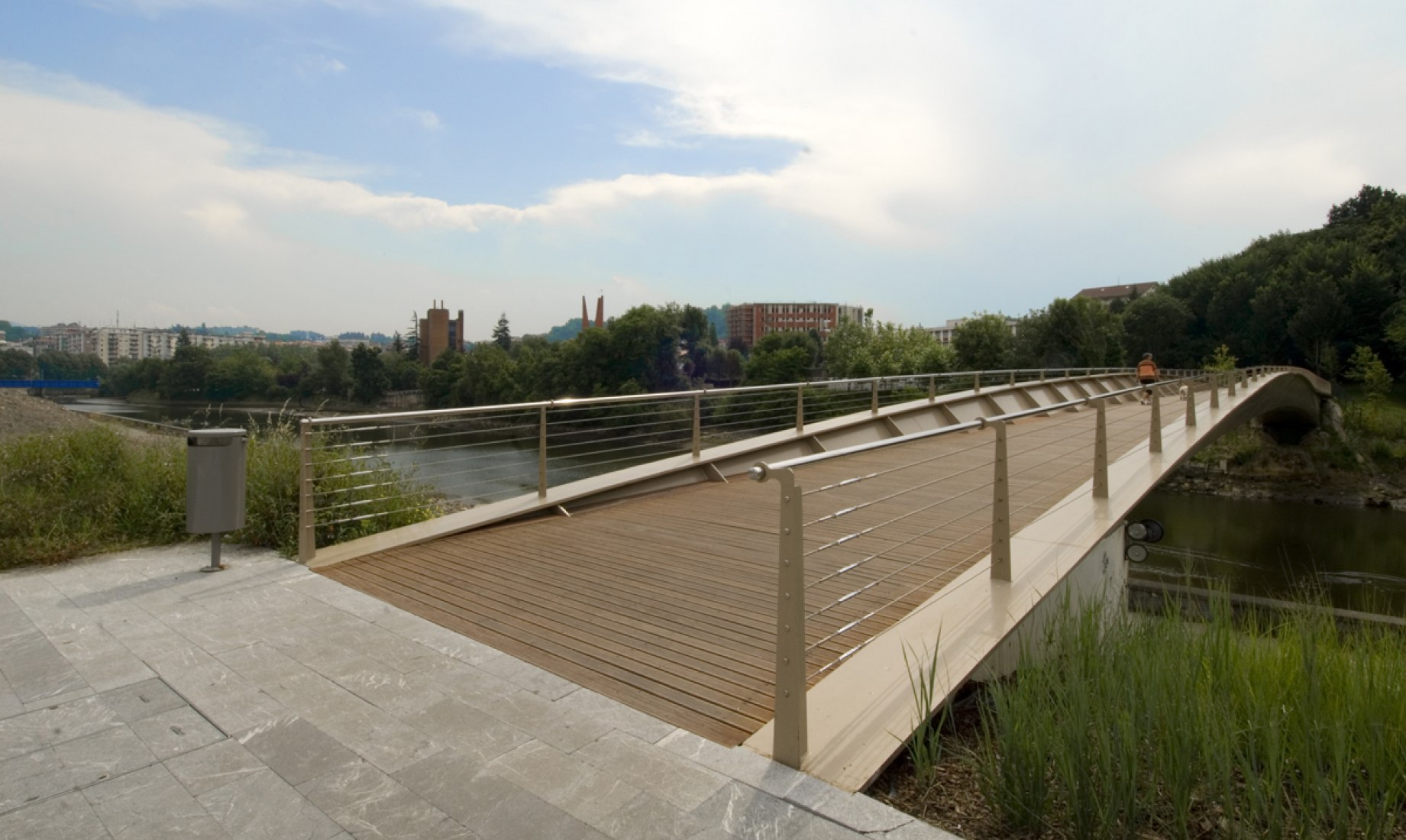 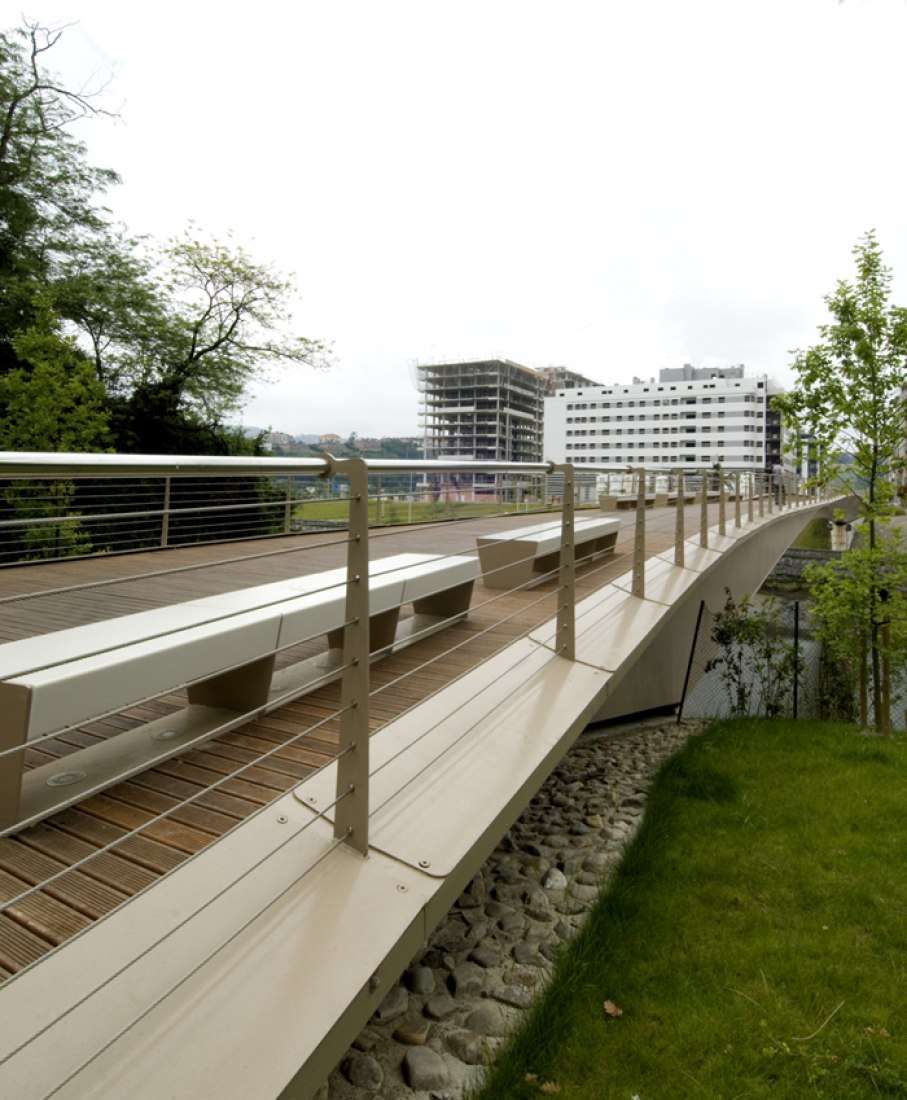 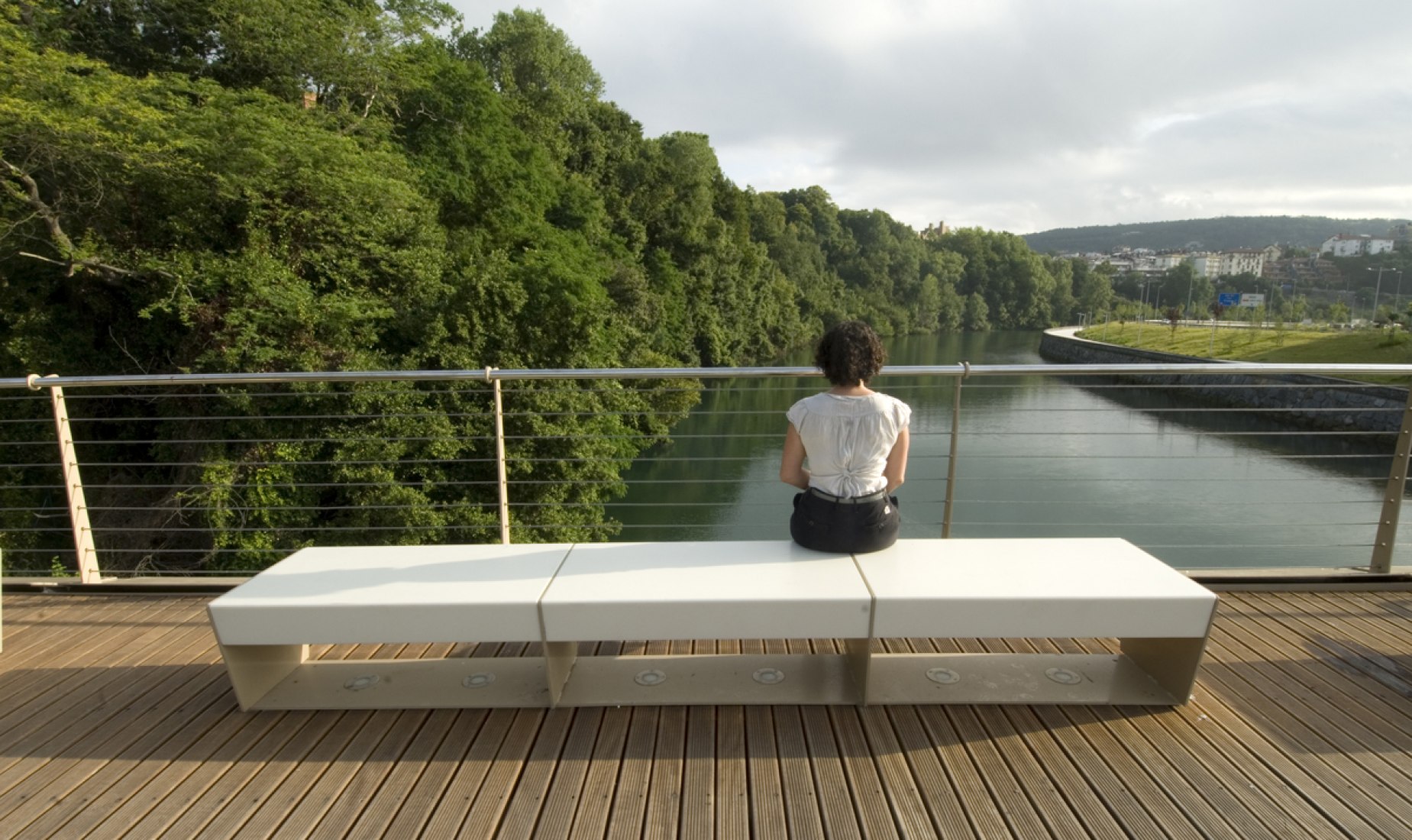 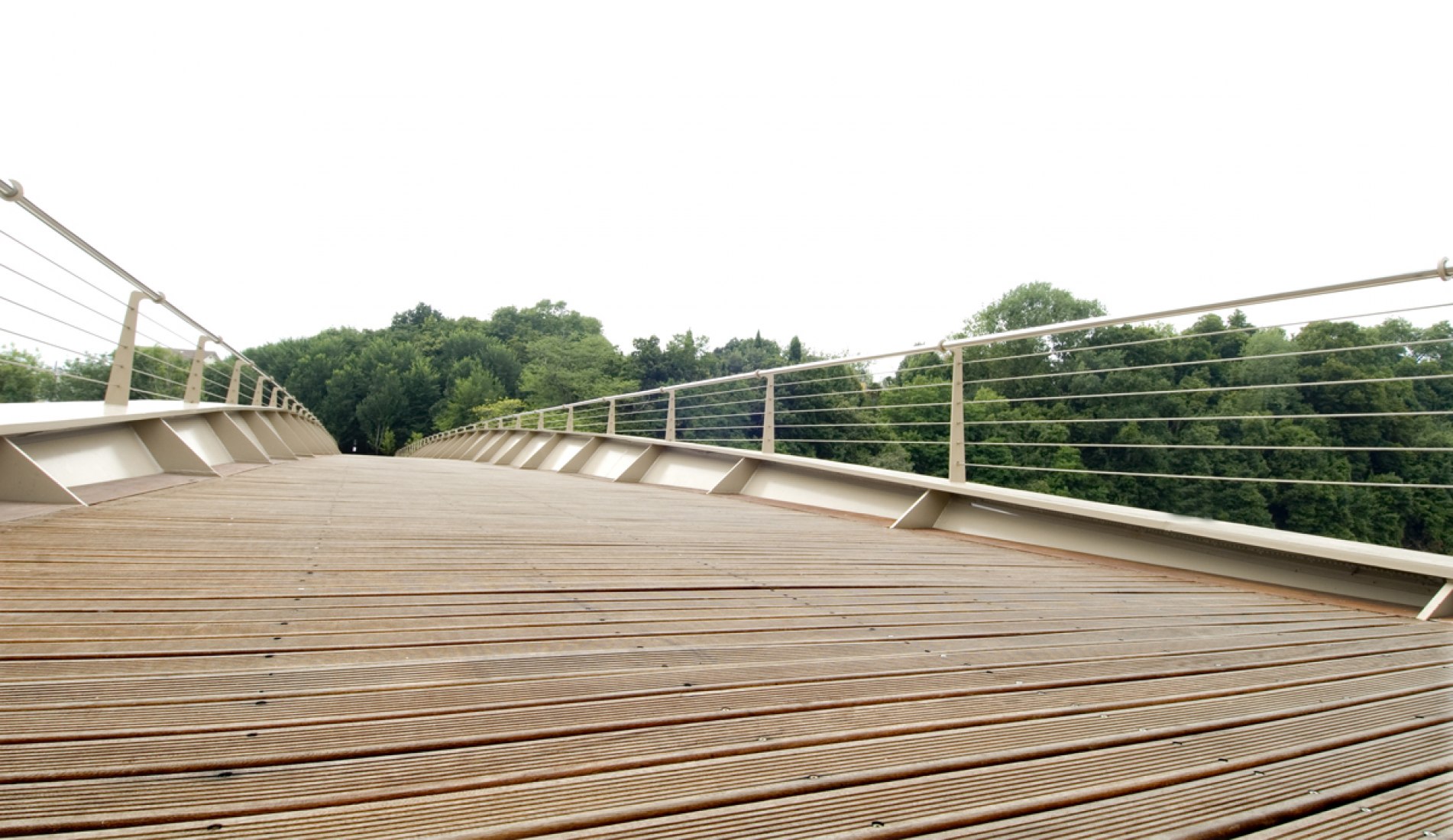 In order to provide the bridge with volume and distinguish between two riverbanks of the Urumea river, 2 distinct areas of the web are made. The web on the Park riverbank is a flat vertical surface, and on the Riberas de Loyola it is a curved-warped surface. All the elements of the bridge are curved in elevation and / or at the base, providing therefore a strong contained dynamism.

The footbridge was designed together with Agence TER, french-german Landscape Architecture Office.

The footbridge is located on the river Urumea in San Sebastian. On the left bank of the river is a new urban area, while the right bank is a historic city park. The bridge crosses the river with a span of 73,92m. without intermediate supports. The bridge is restrained in the abutments. These elements are hidden, and the two ends of the bridge draw the outline of the field to adapt. Thus, the pedestrian access to the riverside vegetation without destroying it.

The bridge structure is a beam of 92,4m. long, with 3 spans of 9,24, 73,92 and 9,24m. The width of the bridge is variable (3m in the city / 6,4m in the park). The maximum width is achieved by projections to the box - girder, this allows the disposal of banks. In order to provide the bridge with volume and distinguish between two riverbanks of the Urumea river, 2 distinct areas of the web are made. The web on the Cristina Enea Park riverbank is a flat vertical surface, and on the riverbank of Riberas de Loyola it is a curved - warped surface. The intersection of the two surfaces generates a parabolic shape.

Inside the cell box is stiffened by transverse bulkheads. The separation between these elements is 2310 mm. The cross section is very variable: rectangular in the park; trapezoidal in the city. The top of the box width is 4500mm. The bottom width varies between 4500mm. (in the park) and 1275mm. (in the city). The depth is very variable: zero at the extremes, 2,9m. on the park ,2,2m. on the city, and 1,2m. on the River.

The upper flanges of the box are two sheets of 35x500 or 45x500mm. Their transverse separation is 4500mm between the axes. Its path is winding. It´s at the height of the pavement in the park, and 0.9m above the pavement on the river.

The purpose of the spans of 9,24m located in the abutments is restraining the beam. The lateral spans originate some reactions of compression at the internal supports and traction on the ends. The reactions of compression are transmitted to the abutments by the neoprenes. Traction reactions are collected by double bolt anchors. These elements allow longitudinal displacement, but prevent from vertical movement.

The bridge was designed to be simple to assemble. No temporary supports were placed in the river. The structure was divided into three parts. The two ends were anchored to the abutments, and placed cantilevered. Subsequently placed the central section on the river, and joined the three sections by welding. The footbridge is a three-span continuous beam, which works to bending. The cross section is very variable, and due to the hyperstatism the inertia variation directly affects the efforts.

Mechanical properties were obtained in 43 sections of the bridge. This allowed a very tight calculation of deflections, supported by the load test. The deflection of the bridge was limited to L/1500 for an overload of 2 kN/m2. This led to a good dynamic behavior of the structure. 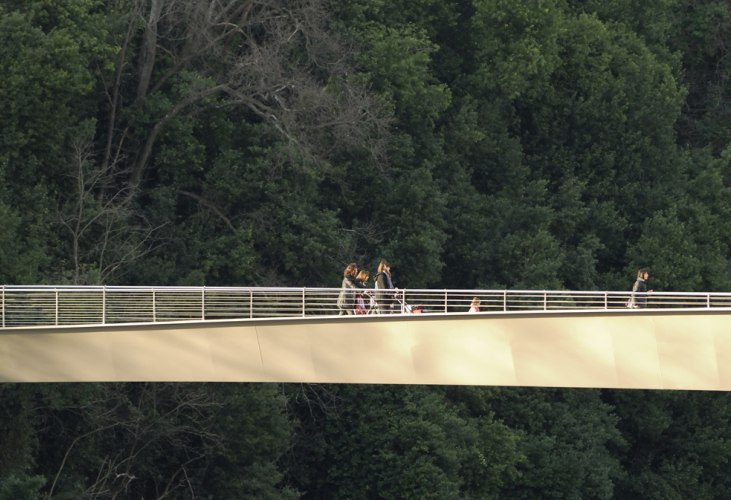 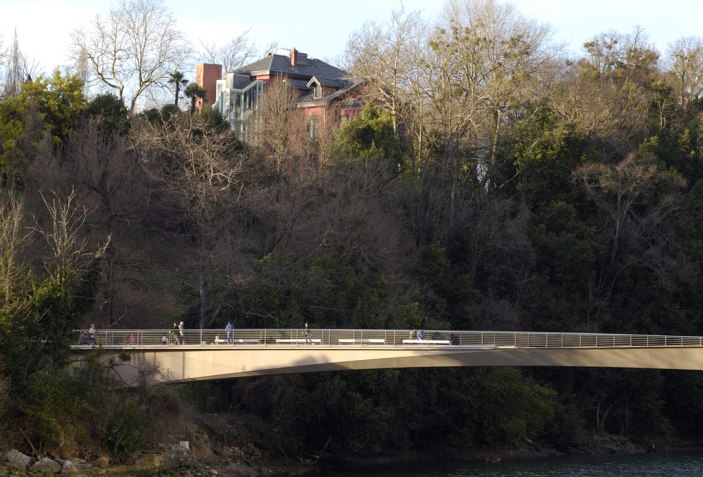 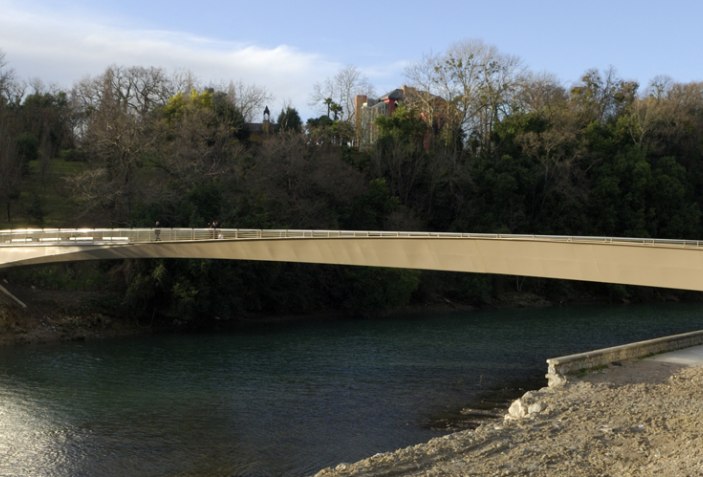 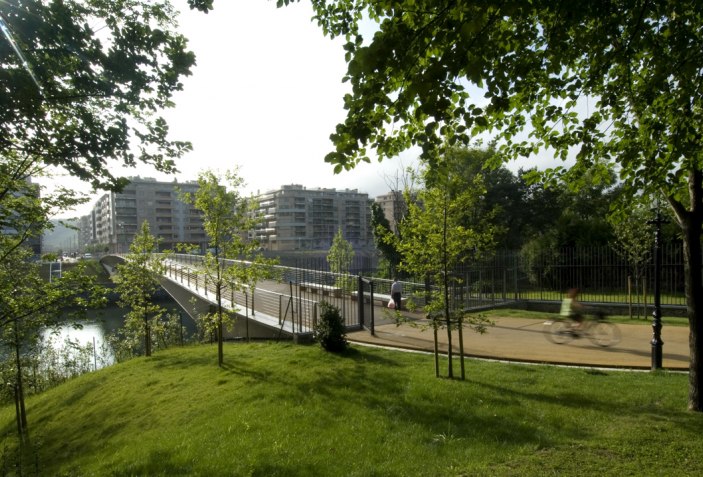 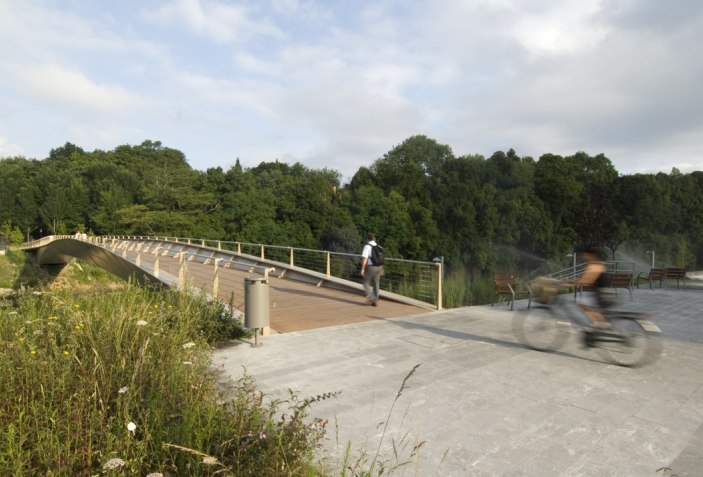 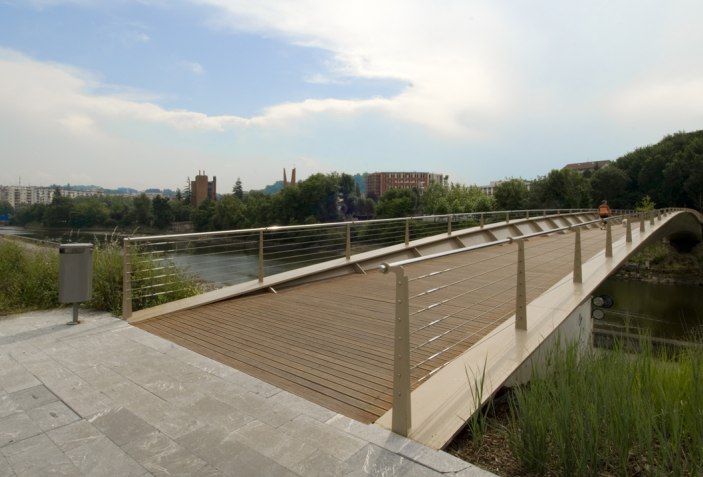 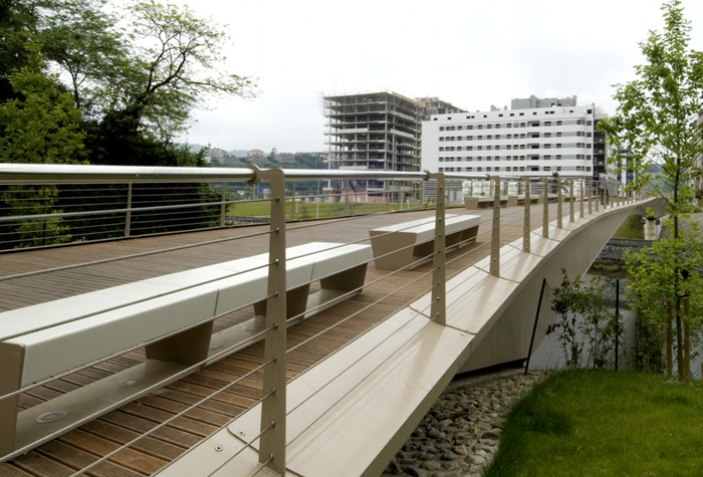 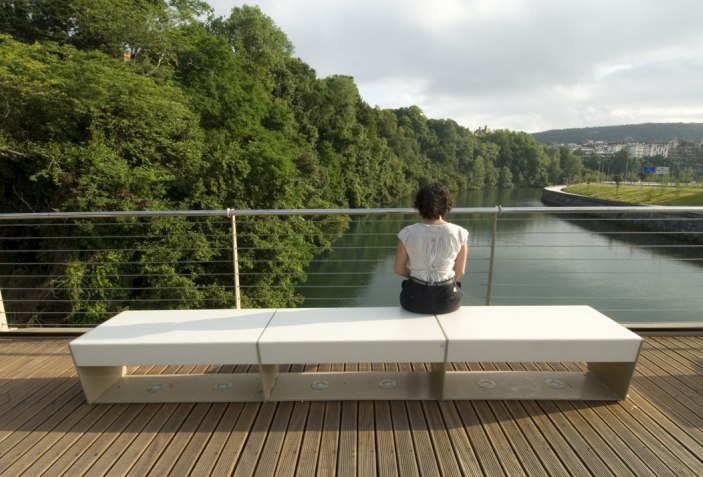 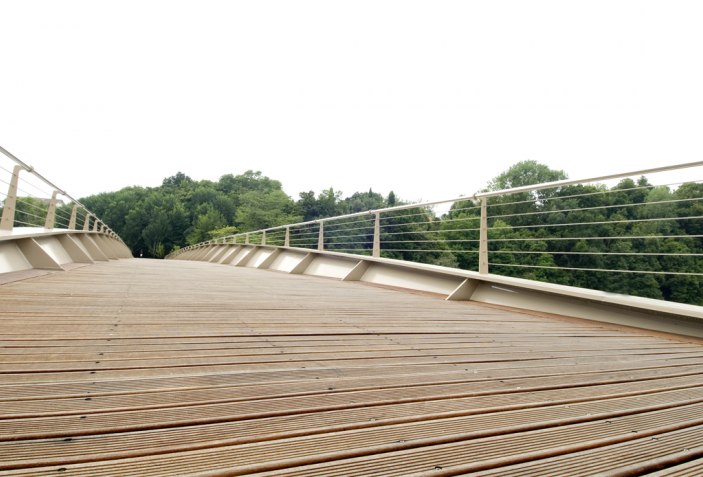 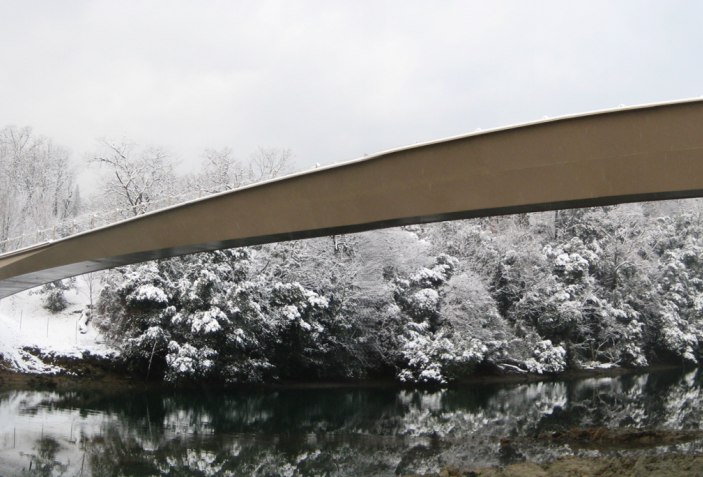 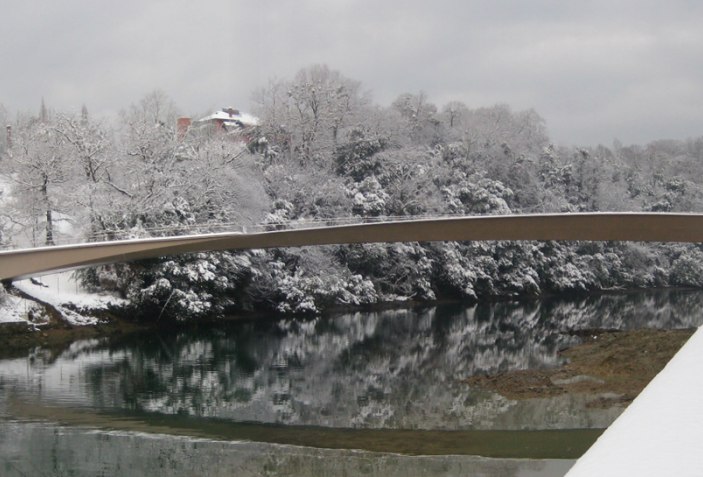 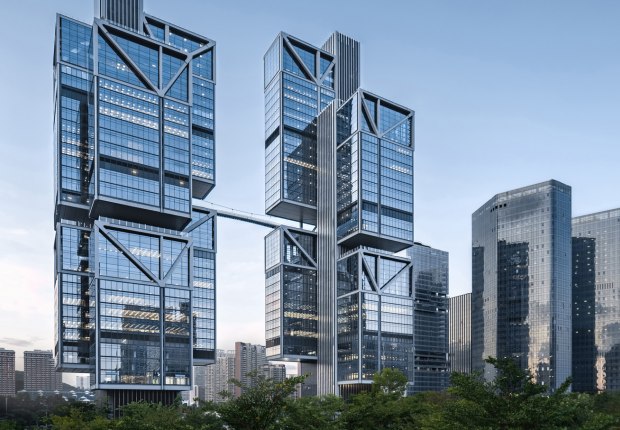 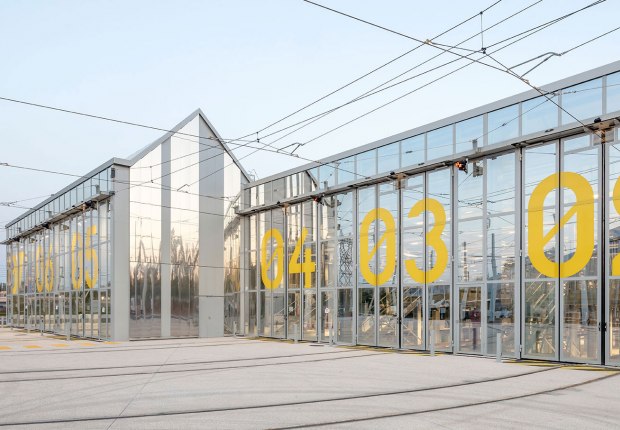 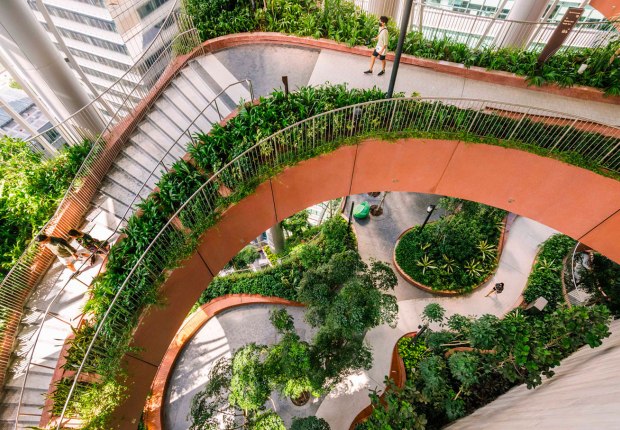 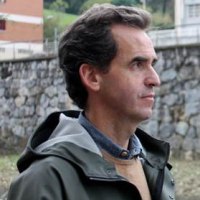 anta is a young civil engineering company founded in May 2003 by Mario Guisasola (Civil Engineering graduate from the Universidad Politécnica de Madrid and Master Ouvrages d'Art at the Ecole Nationale de Ponts et Chaussées, Paris). In July 2005 AENOR awarded anta the Certificate of Company Registration and the right to use the trademark.

The main purpose of anta’s activity is the design and construction management of civil engineering projects focused primarily on the field of bridges, and special structures. Their projects are based on clear structural concepts, endowed with a formal restraint away from unnatural solutions. 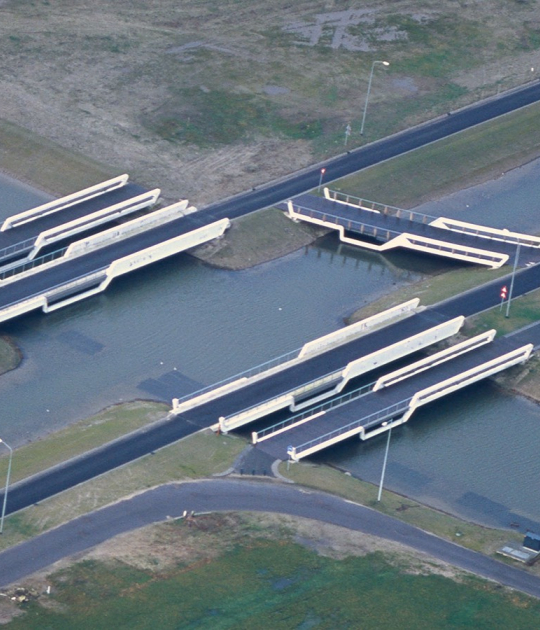