The opening, October 25th, of the show in Soho from the LAGI (Land Art Generator Initiative) which features the Whirlers, a project by Caterina Tiazzoldi and Eduardo Benamor Duarte. LAGI's mission is focused on inviting designers to develop visions for the implementation of renewable energies (solar panels, wind turbines,etc) to become a form of Land Art. 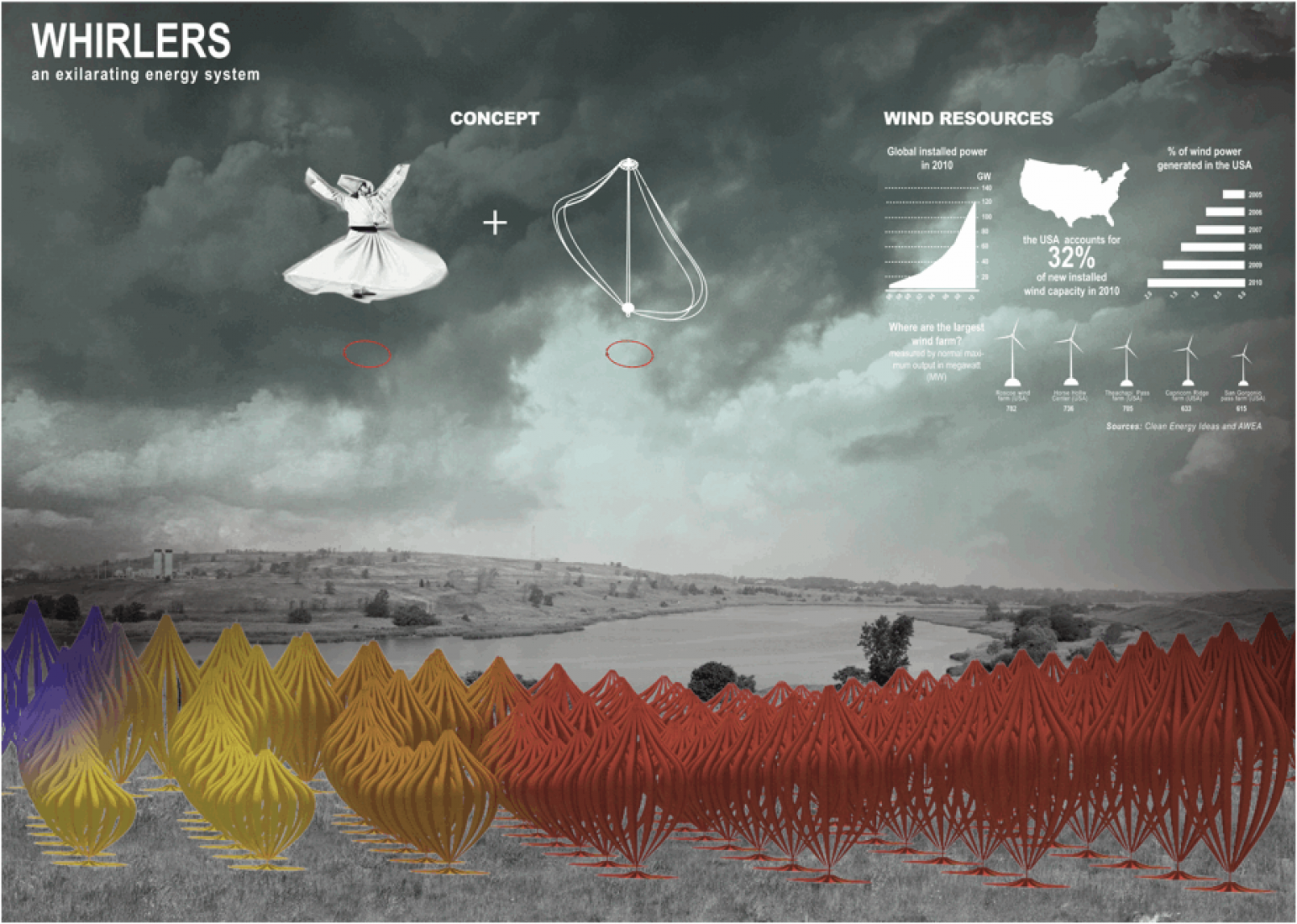 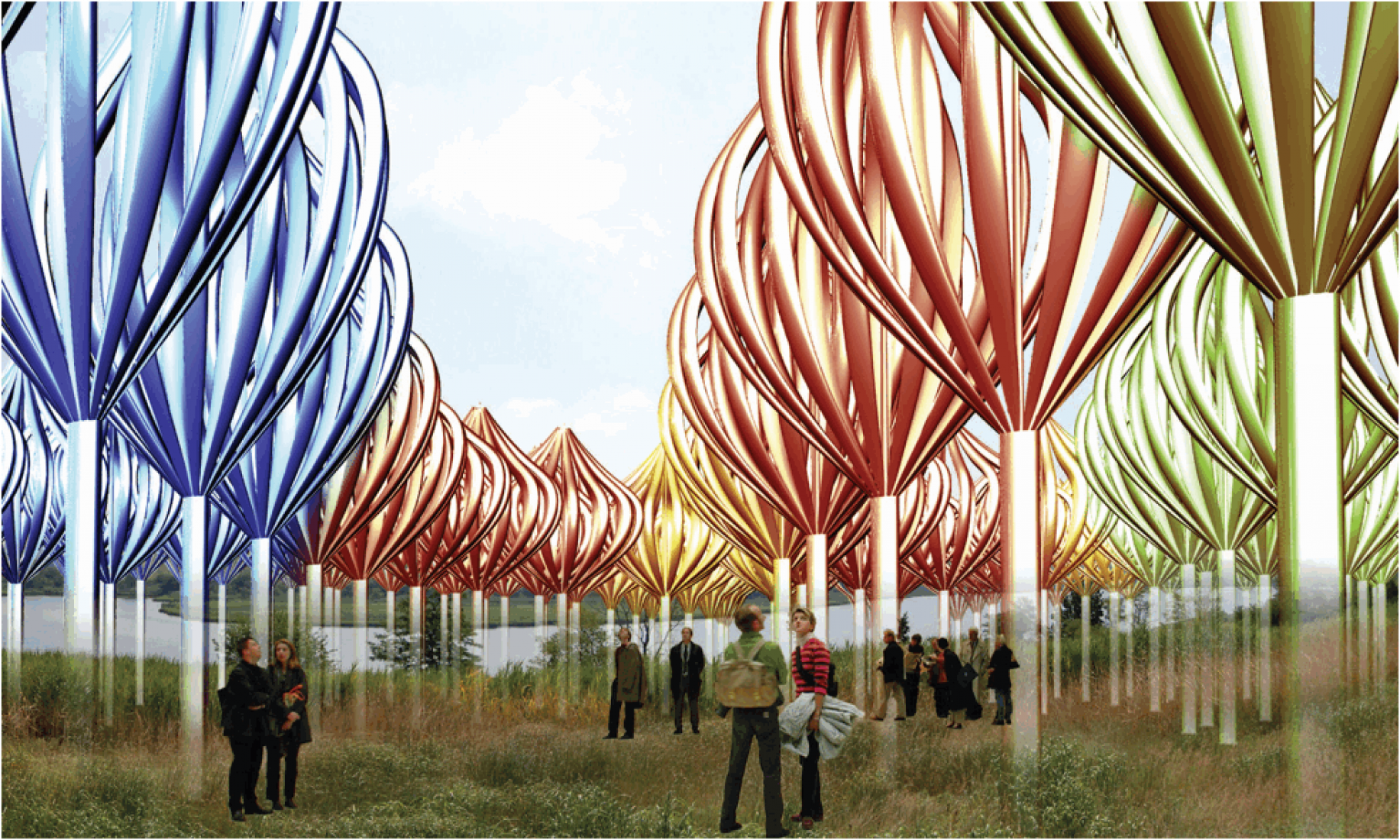 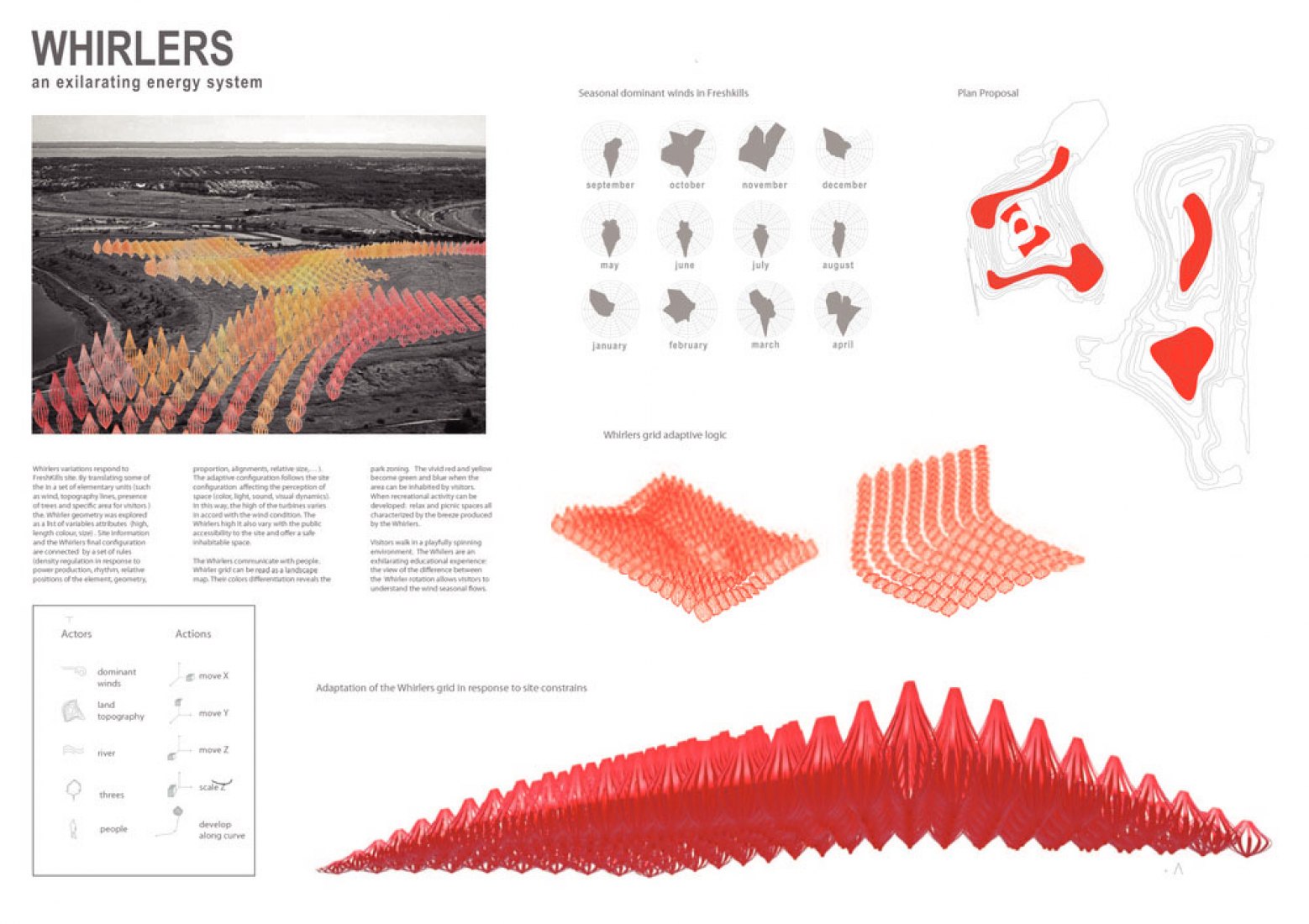 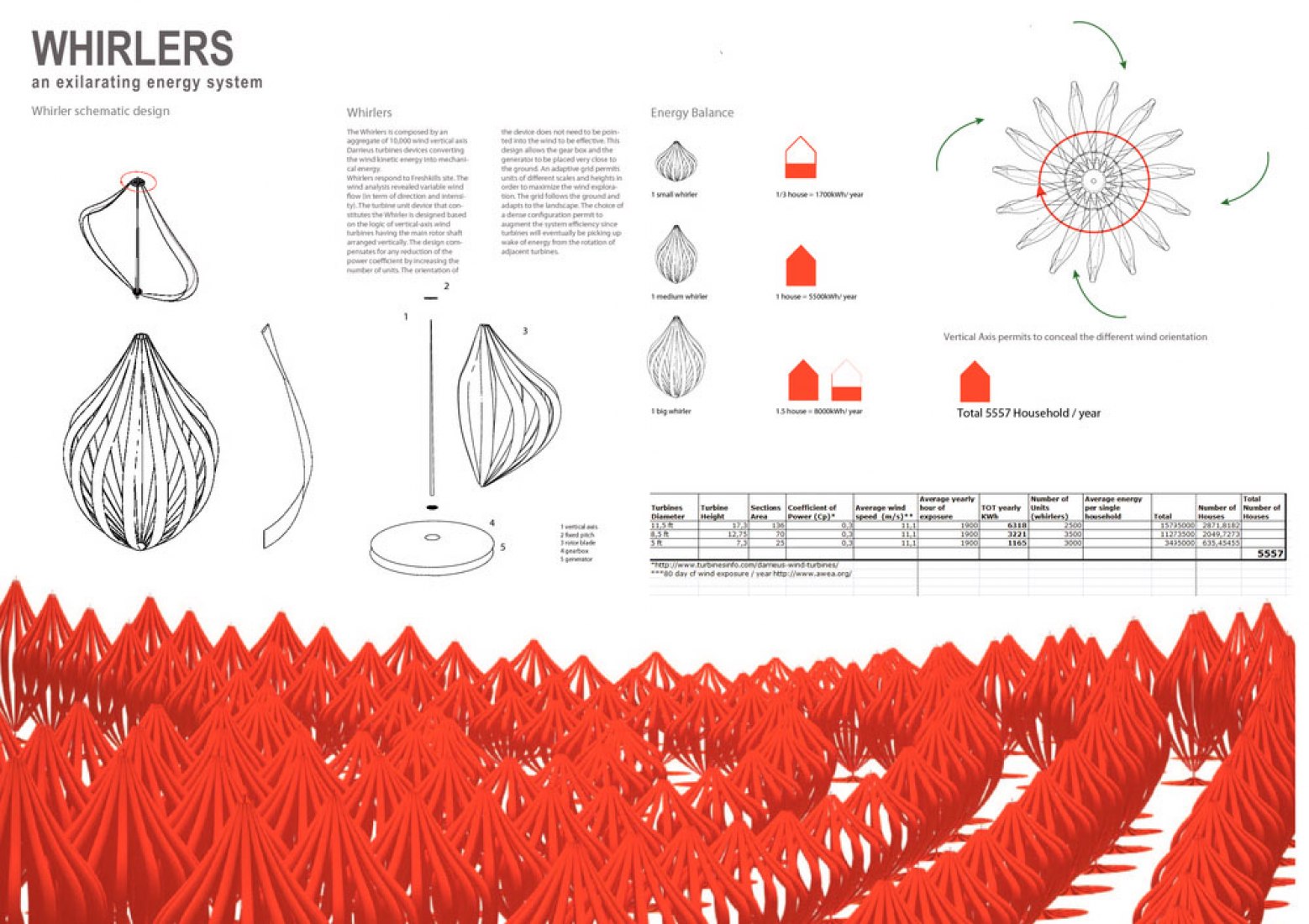 The NY/ Turin based architect, Caterina Tiazzoldi and the NY/ Lisbon based architect Eduardo Benamor Duarte will feature the Whirlers – an exhilarating energy system in the show Fresh Kills Park curated by the Land Art Generator Initiative, opening in New York on October 25th at the Soho Digital Art Gallery in New York.

The Land Art Generator Initiative showcases works whose visions expand the field of renewable energies (solar,wind) as a form of Land Art. In the 2012th edition the curators Robert Ferry & Elizabeth Monoian have selected series of projects to be displayed at the Soho Digital Art Gallery in New York.

Among the works featured in the show, the Whirlers, – an exhilarating energy system designed by Caterina Tiazzoldi and Eduardo Benamor Duarte example of the immense potential of aesthetically interesting renewable energy installations for sustainableurban planning. Conceived as a three dimensional grid of Darrieus Turbines that collects wind and transforms it for perceptive energy production. An energy system that create a new spatial experience conceived as a whirling artificial forest, changing the visual and thermal perception of the land by mixing natural and artificial elements. 10000 colorful turbines spinning following the ground and wind direction: An inebriating visual experience ranging in color and scale reminding a spinning forest.

The Land Art Generator Initiative (LAGI) is curated by Robert Ferry & Elizabeth Monoian whose mission is to design and construct public art installations that have the added benefit of large scale clean energy generation. Each proposal aims to continuously distribute clean energy into the electrical grid, with each having the potential to provide power to thousands of homes. The 2012 LAGI competition is held in partnership with New York City's Parks & Recreation for a site within Freshkills Park (the former Fresh Kills Landfill). 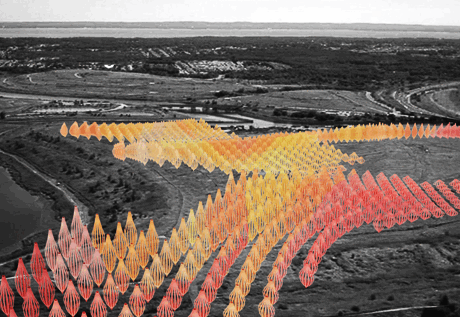 The Whirler is an exhilarating energy system that collects wind and transforms it for perceptive energy production. The Whirler is a three dimensional grid of Darrieus Turbines, having the ability to stimulate and challenge the visitors of the park. A wind energy system based on a vertical axis conceived to respond to the variability of Fresh Kills’ wind direction and intensity.

This energy system creates a new spatial experience conceived as a whirling artificial forest, changing the visual and thermal perception of the land by mixing natural and artificial elements. 10000 colorful spinning top following the ground and wind direction. An inebriating visual experience reminding aforest of spinning top. The design of each unit ranges in height, scale andcolor which allows for a more seamless ability to merge with and diverge from the landscape.

The Whirlers are 10.000 vertical Turbines designed according to a flexible geometric grid. The grid responds to the site topography, dominant winds and programmatic conditions.  The design process was conceived by translating in a set of numerical data the project input. Thisprocess permits to transform the site condition in editable data.

The Whirlers typological variations respond to FreshKills’ site. By translating some of the predominant data in a set of elementary units (such as wind speed, topography lines, presence of trees and specific area for visitors) the Whirler geometry was explored as a list of variables attributes  (height, length colour, size). Site information and the Whirlers final configuration are connected by a set of rules (density regulation in response to power production, rhythm, relative positions of the element, geometry, proportion, alignments, relative size). The adaptive grid follows the site configuration affecting the perception of space (color, light, sound, visual dynamics).

In this way, the turbines height vary according with the wind condition as well as with the public accessibility to the site offering a safe and inhabitable social space.

The Whirlers communicate with people. The Whirler’s grid can be read as a landscape map. Their colors differentiation reveals the park zoning.  The vivid red and yellow become green and blue when the area can be inhabited by visitors. When recreational activity can be developed:  relax and picnic spaces all characterized by the breeze produced by the Whirlers.

Visitors walk in a playfully spinning environment.  The Whirlers are an exhilarating educational experience: observing the difference between the Whirlers’ rotation speed allows visitors to understand the wind seasonal flows.

We are proposing a power plant to contribute to the electricity grid of the city. The Whirlers is composed by an aggregate of 10,000 wind vertical axis Darrieus turbines devices converting the wind kinetic energy into mechanical energy.

The Whirlers is a system that captures energy from nature, converts it into electricity, and have the ability to store, and to transform and transmit electrical power to a power grid connection point to be supplied by others.

Whirlers respond to Freshkills site. The wind analysis revealed variable wind flow (in term of direction and intensity). The turbine unit device that constitutes the Whirler is designed based on the logic of vertical-axis wind turbines having the main rotor shaft arranged vertically. The design compensates for any reduction of the power coefficient by increasing the number of units. The orientation of the device does not need to be pointed into the wind to be effective. This design allows the gear box and the generator to be placed very close to the ground. An adaptive grid permits units of different scales and heights in order to maximize the wind exploration. The proposal is conceived to be scalable and adaptable to different site and areas. The grid follows theground and adapts to the landscape. The choice of a dense configuration permit to augment the system efficiency since turbines will eventually be picking up wake of energy from the rotation of adjacent turbines. 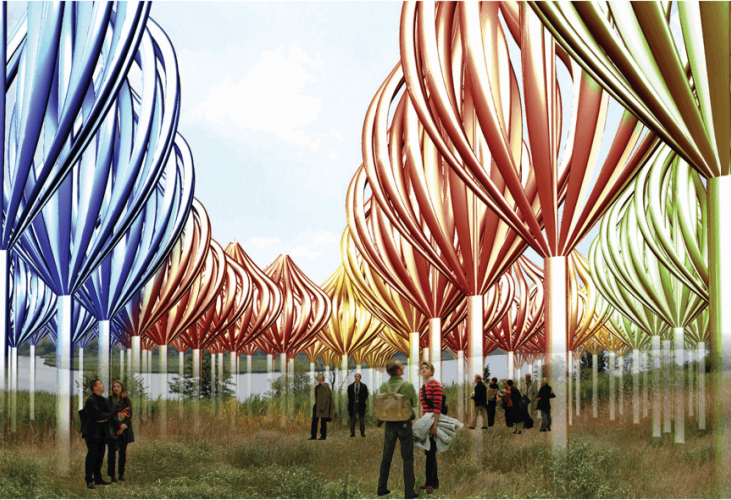 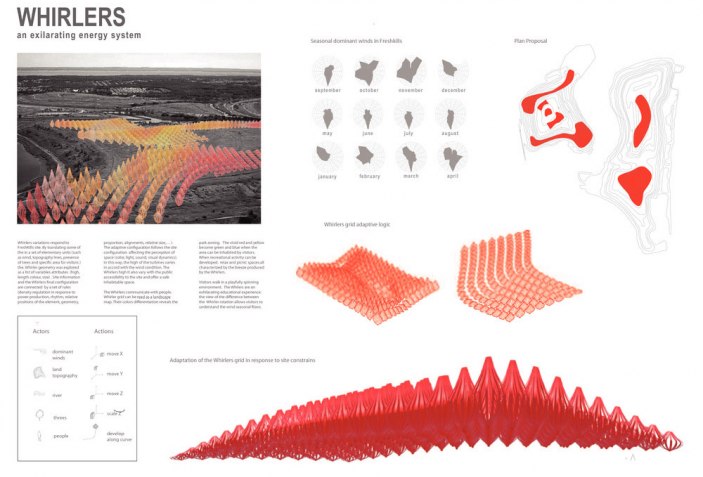 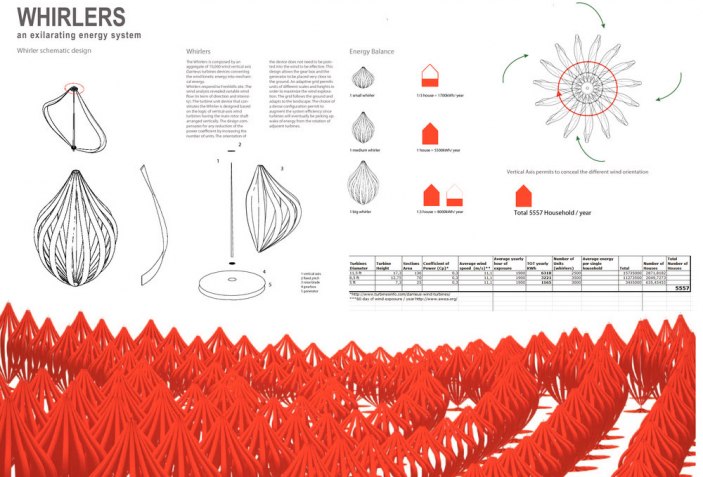 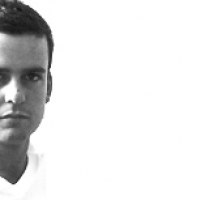 Eduardo Benamor Duarte is an architect and designer, founder of the studio Benamor Duarte Architecture, based in New York City and Lisbon. Since 2011 he is an Assistant professor at the Rhode Island School of Design. Benamor Duarte Architecture’s agenda engage the ideas of recursion, adaptation and reconstitution of formal, informal and informational protocols in differentcontexts. His work and research has been awarded by several institutions such as the Ministério da Cultura – Direcção Geral das Artes, Fundação Calouste Gulbenkian, Fundação para a Ciência e Tecnologia. 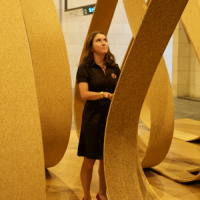 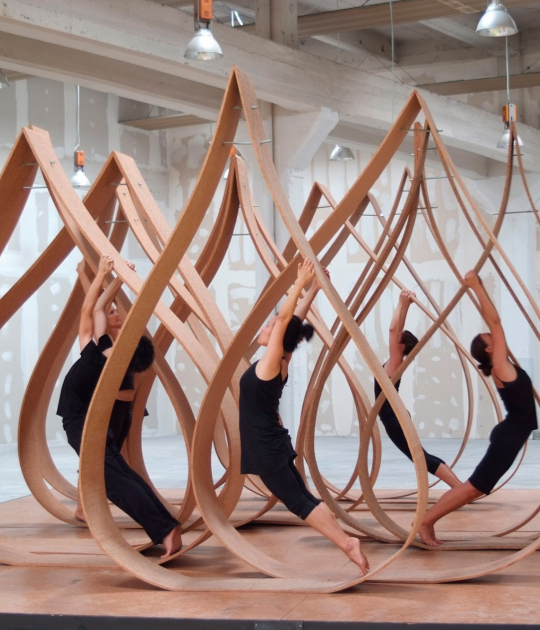 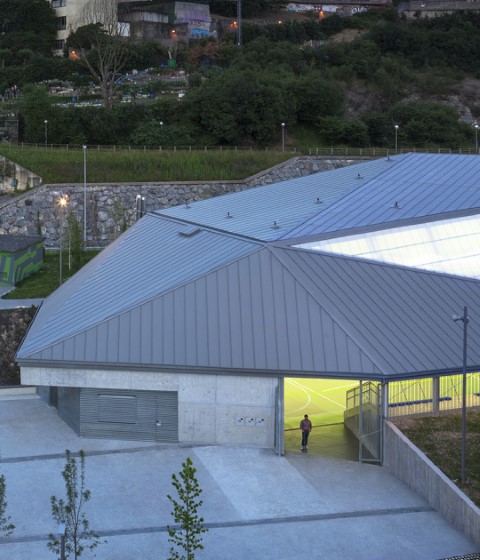 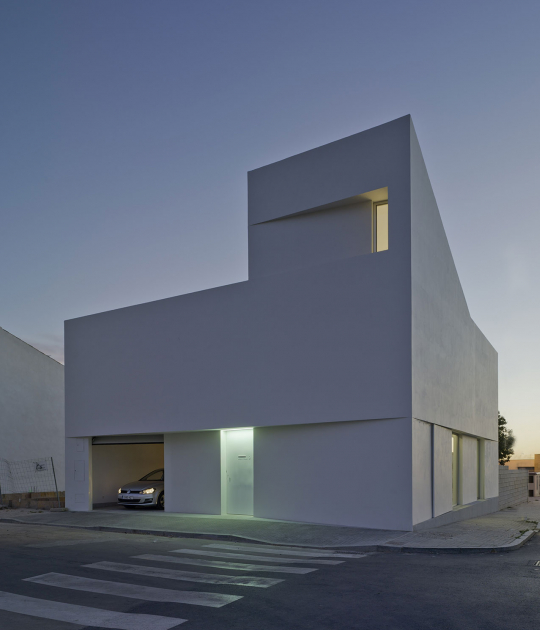 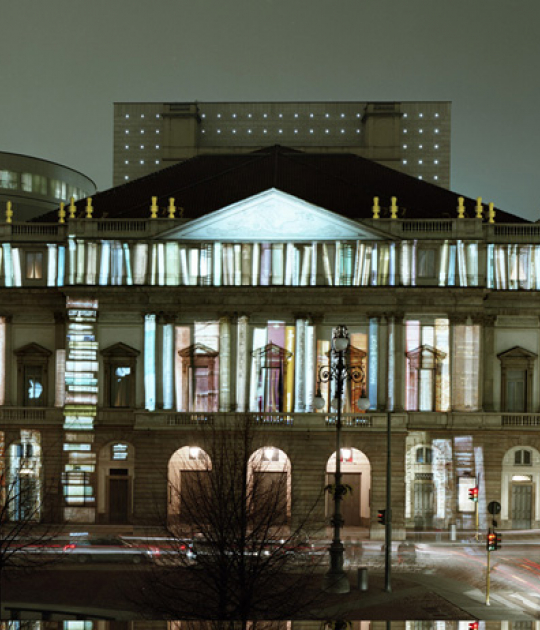 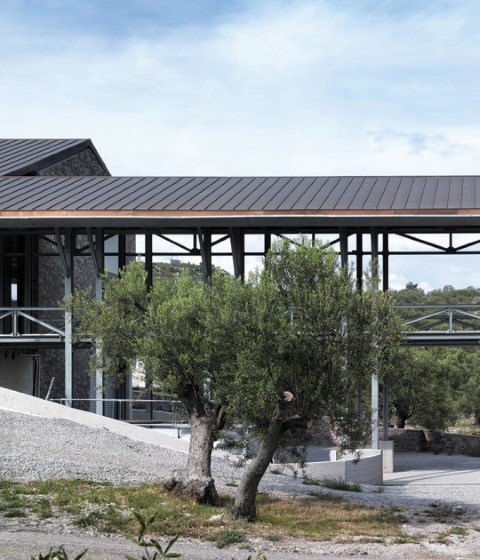