In the presence of Mr. Laurent Fabius, Minister of Foreign Affairs and International Development, Mrs. Liu Yandong, deputy Prime Minister of the People’s Republic of China in charge of Education, Culture, Sciences, Health, Tourism and Sport announced officially on Thursday, September 18th the launch of the design and construction of the National Art Museum of China (NAMOC) by the French Architect Jean Nouvel and the Beijing Institute of Architectural Design (BIAD). 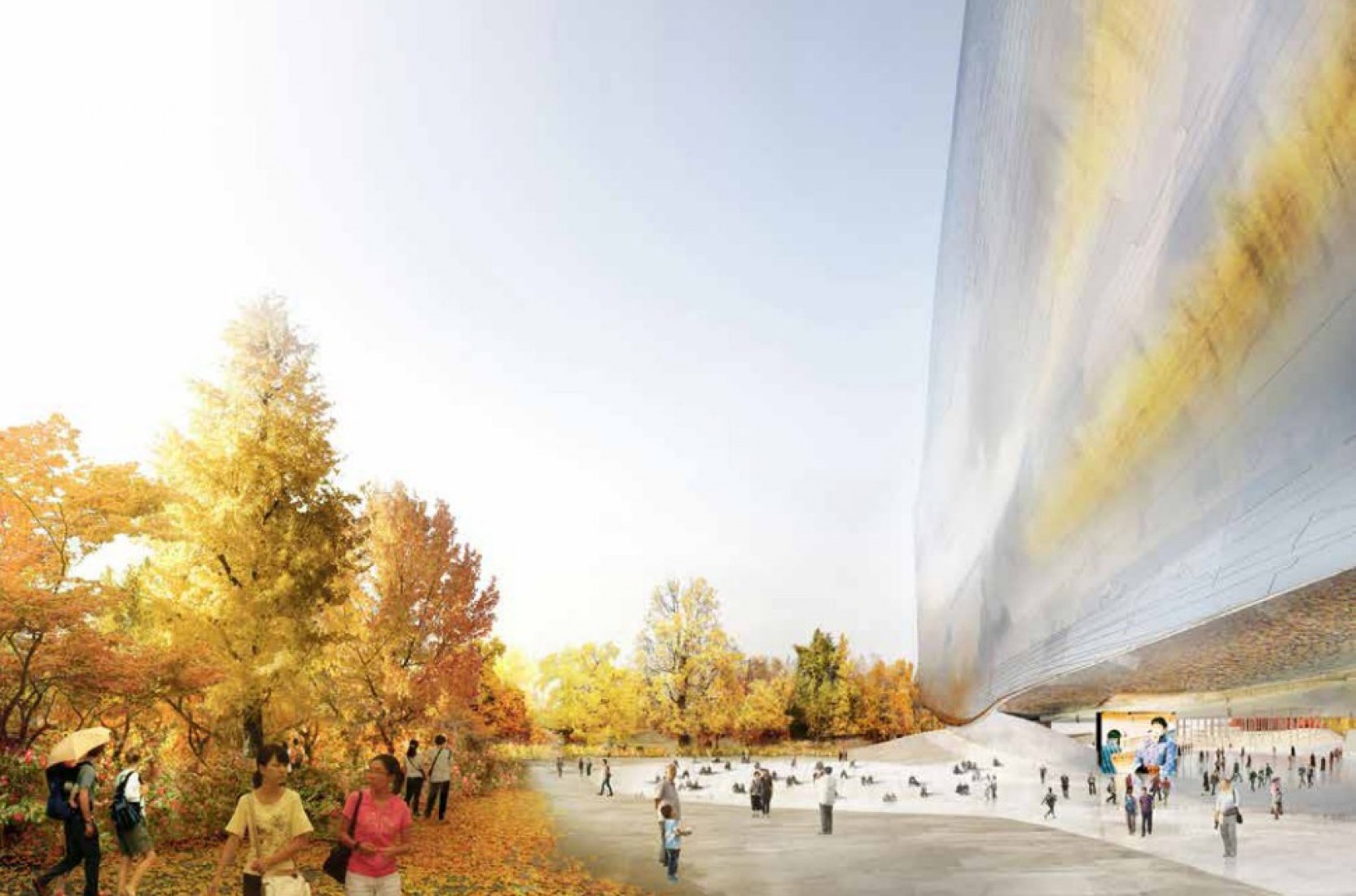 To the East, a fusion of sky and gardens. Image © Ateliers Jean Nouvel. 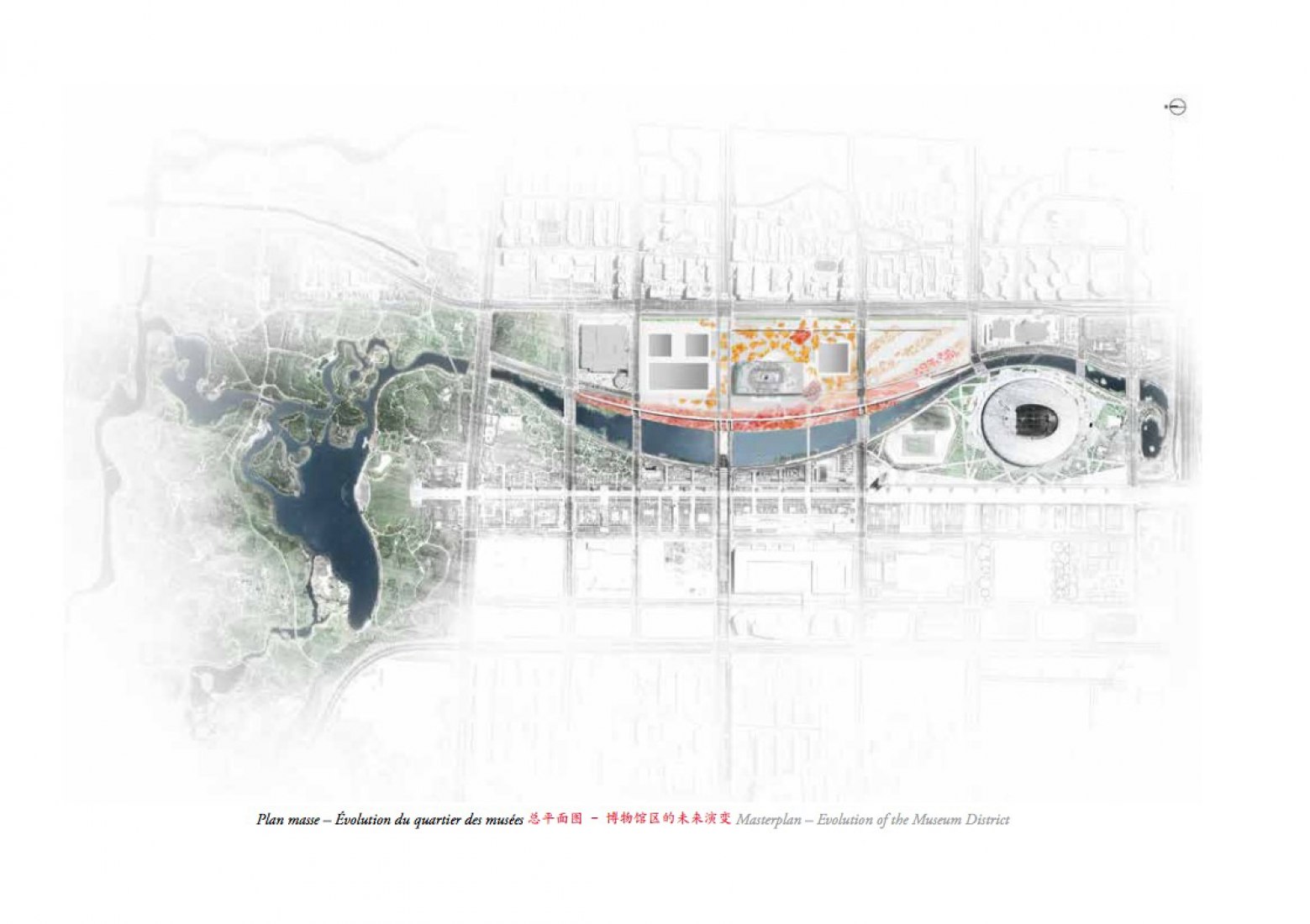 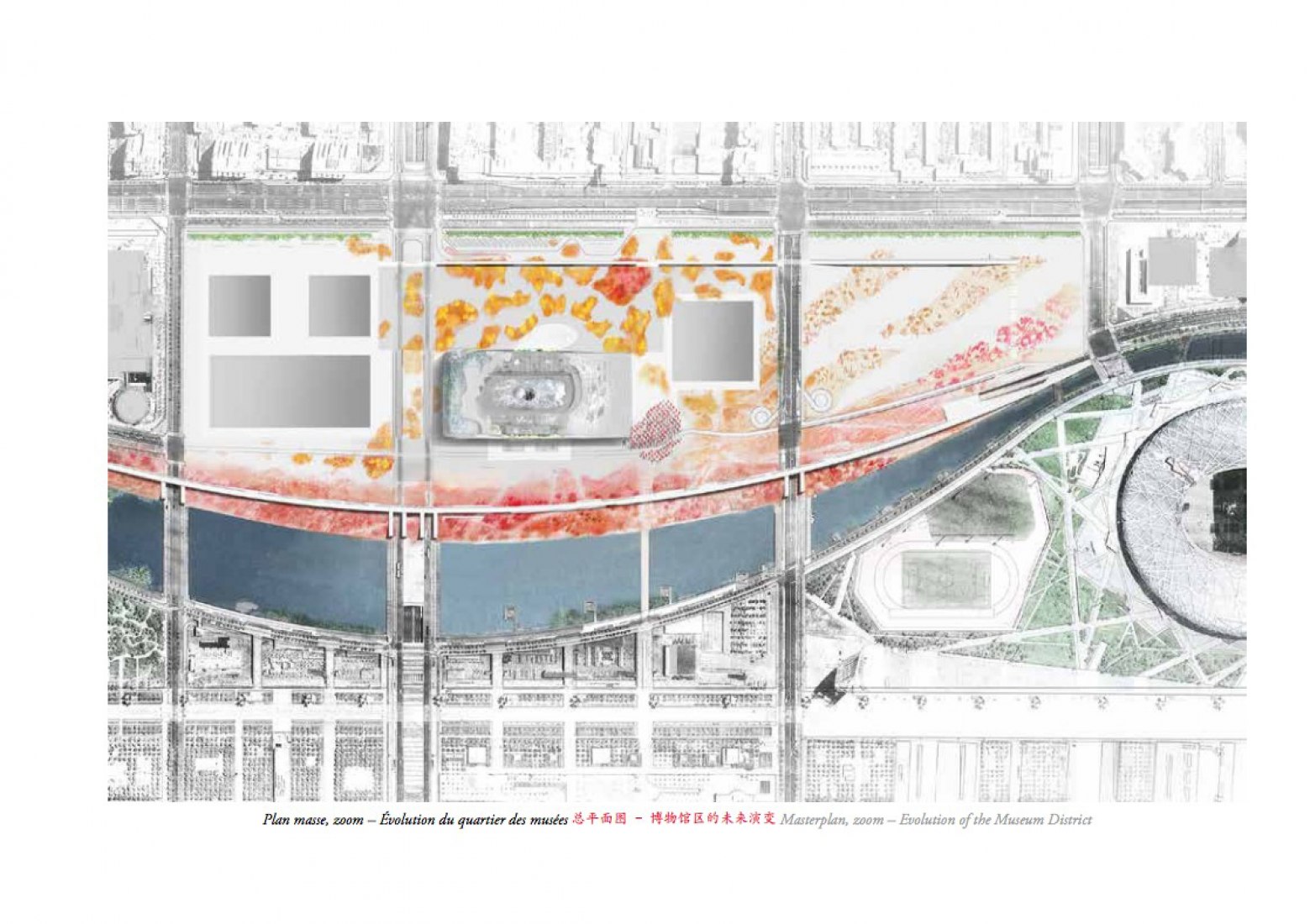 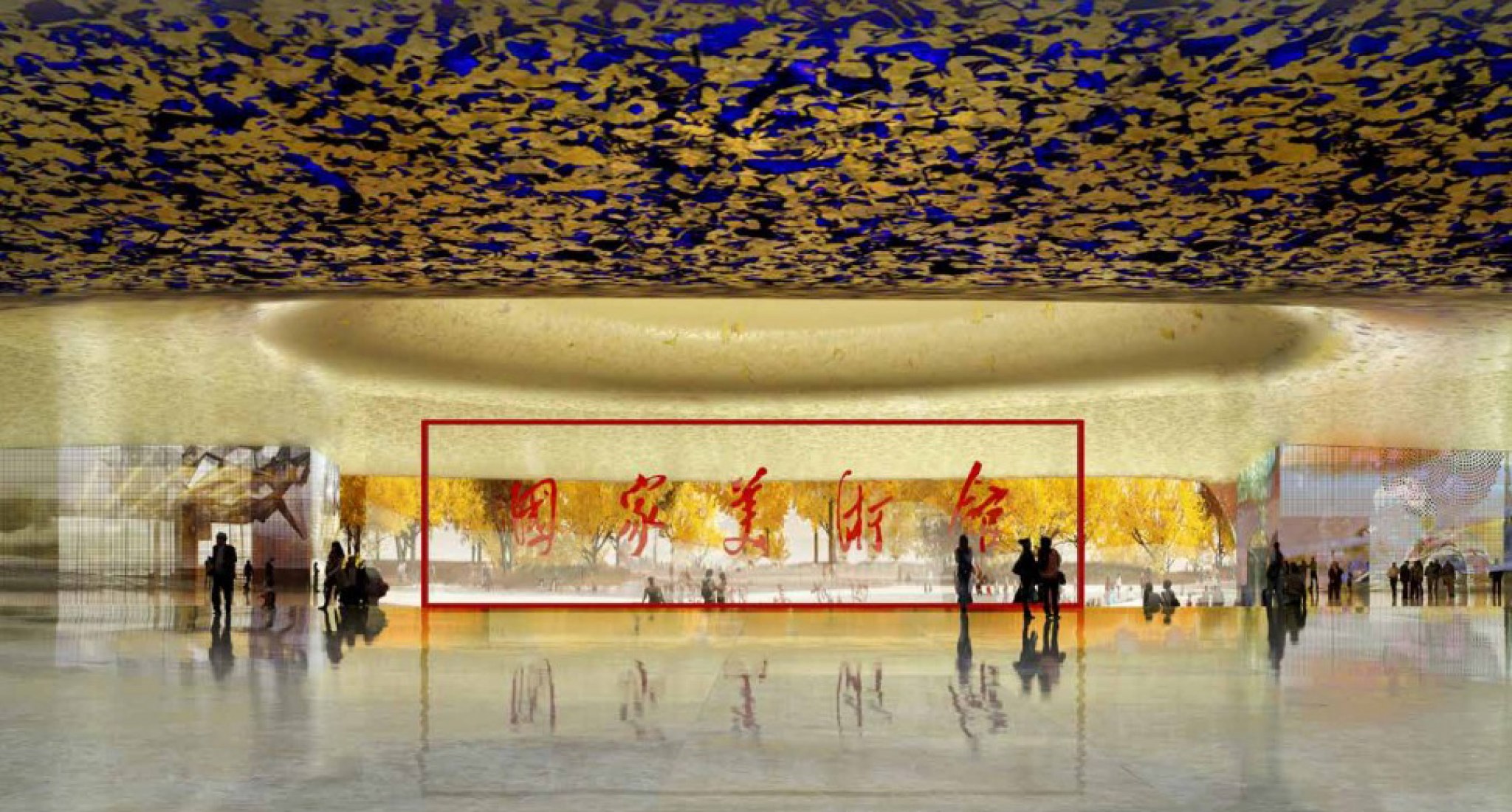 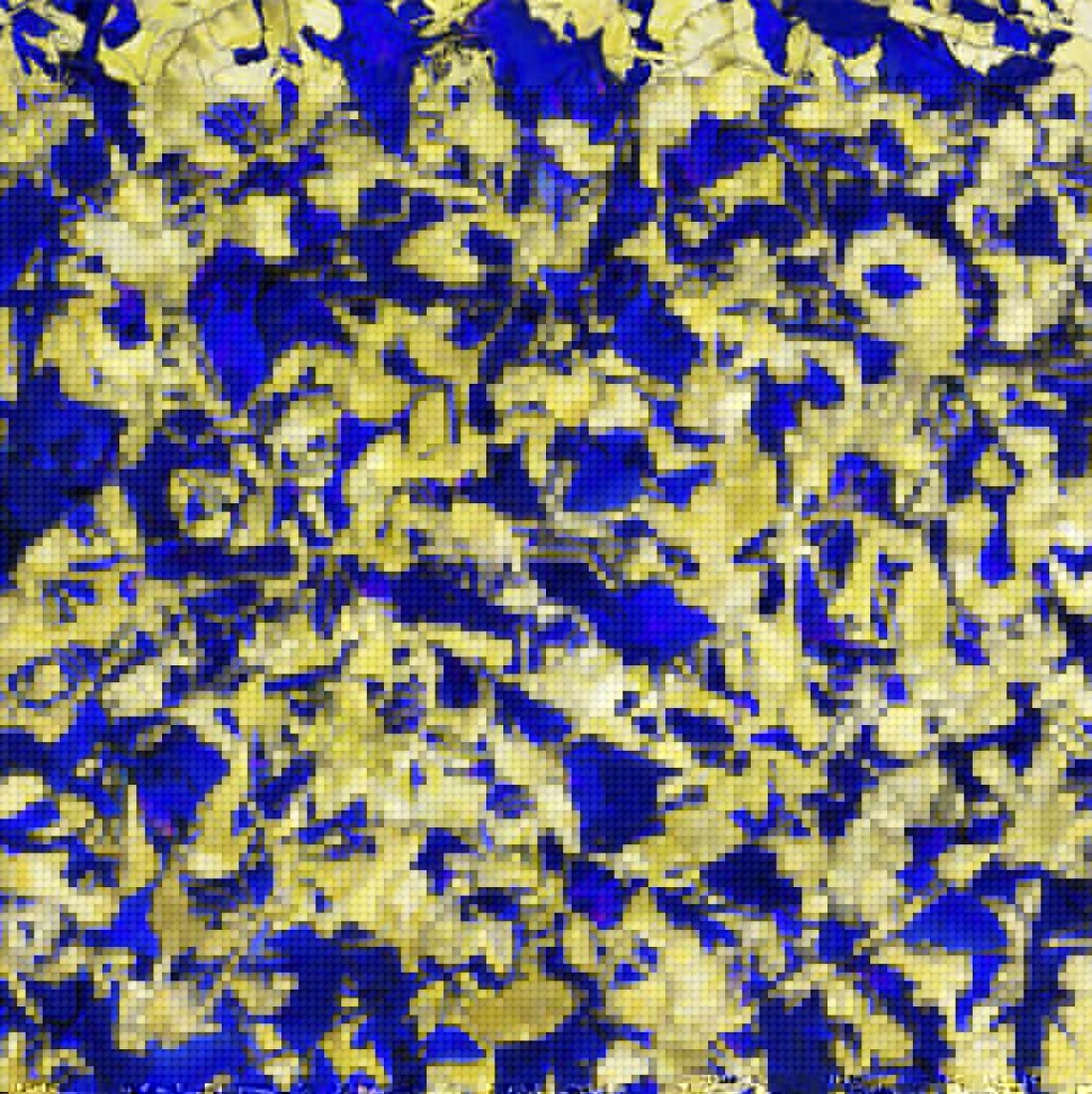 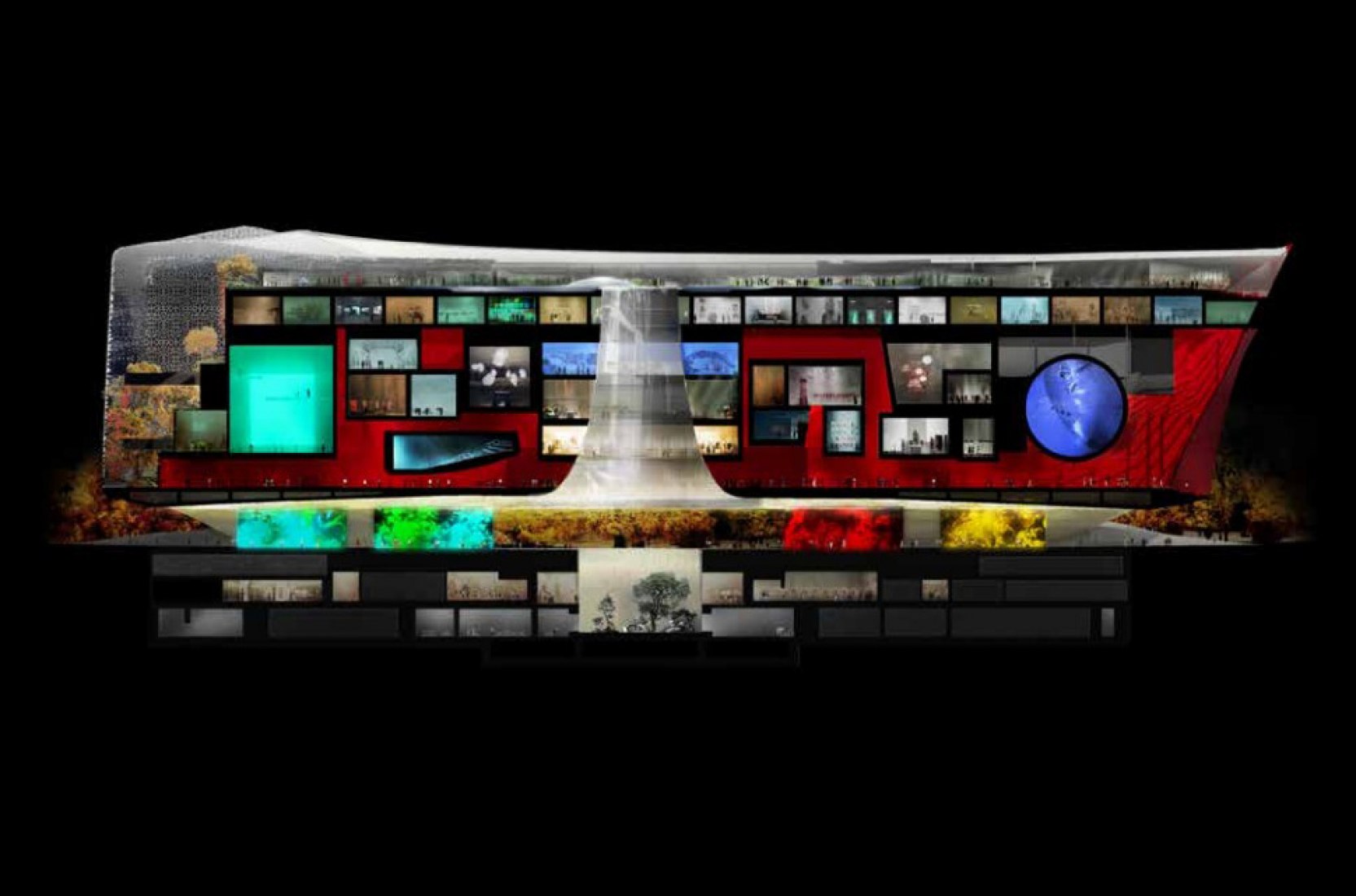 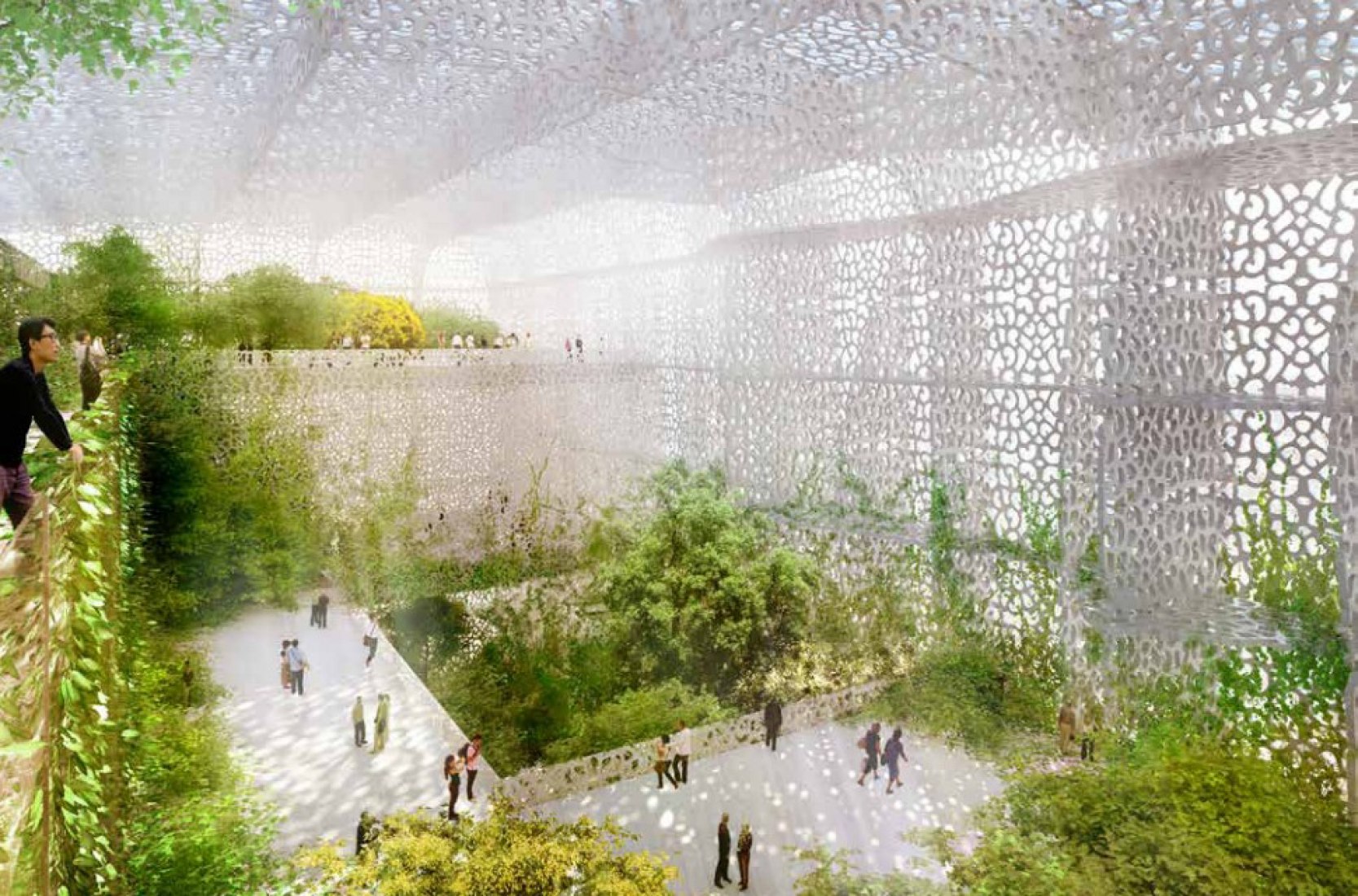 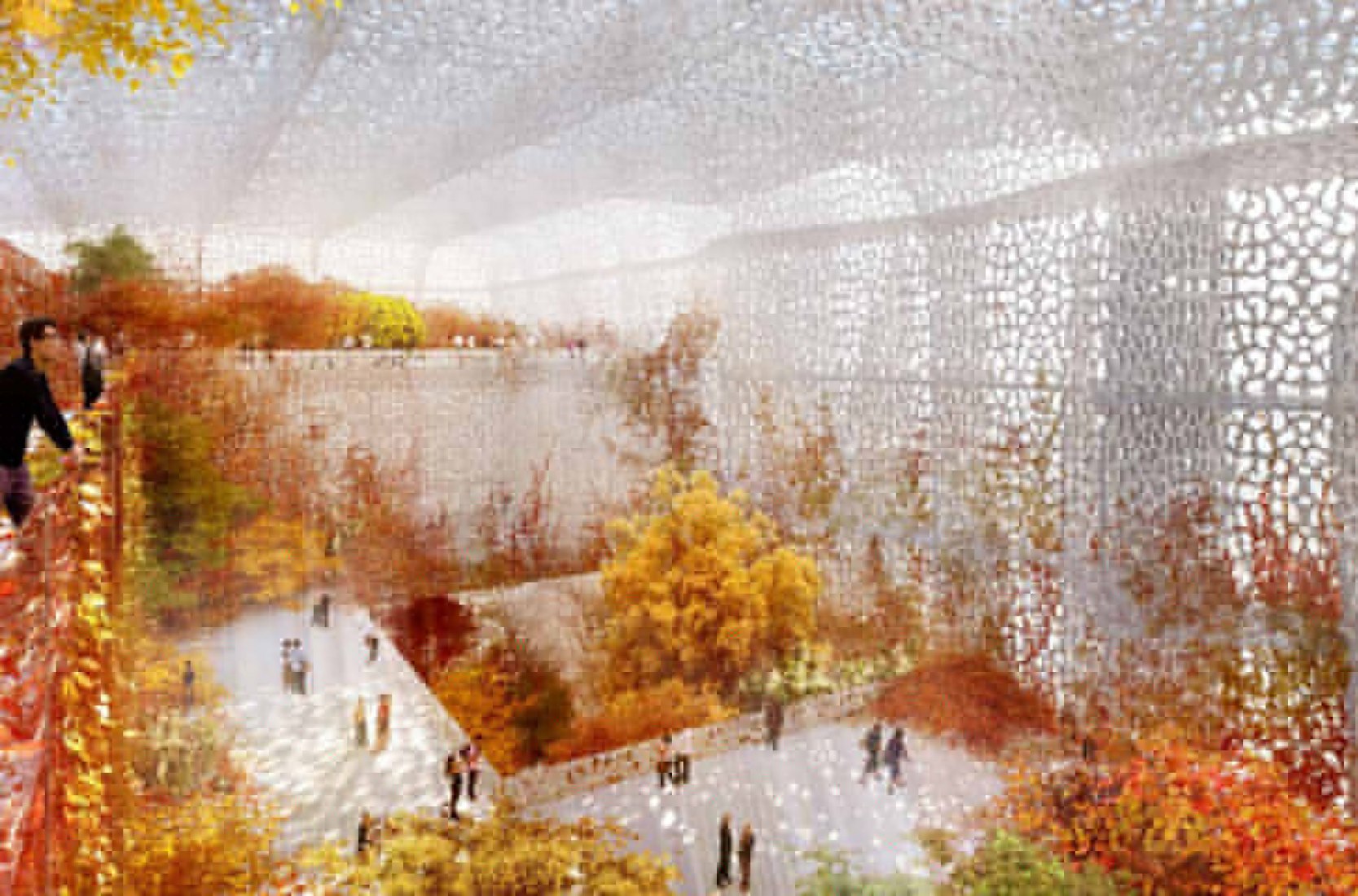 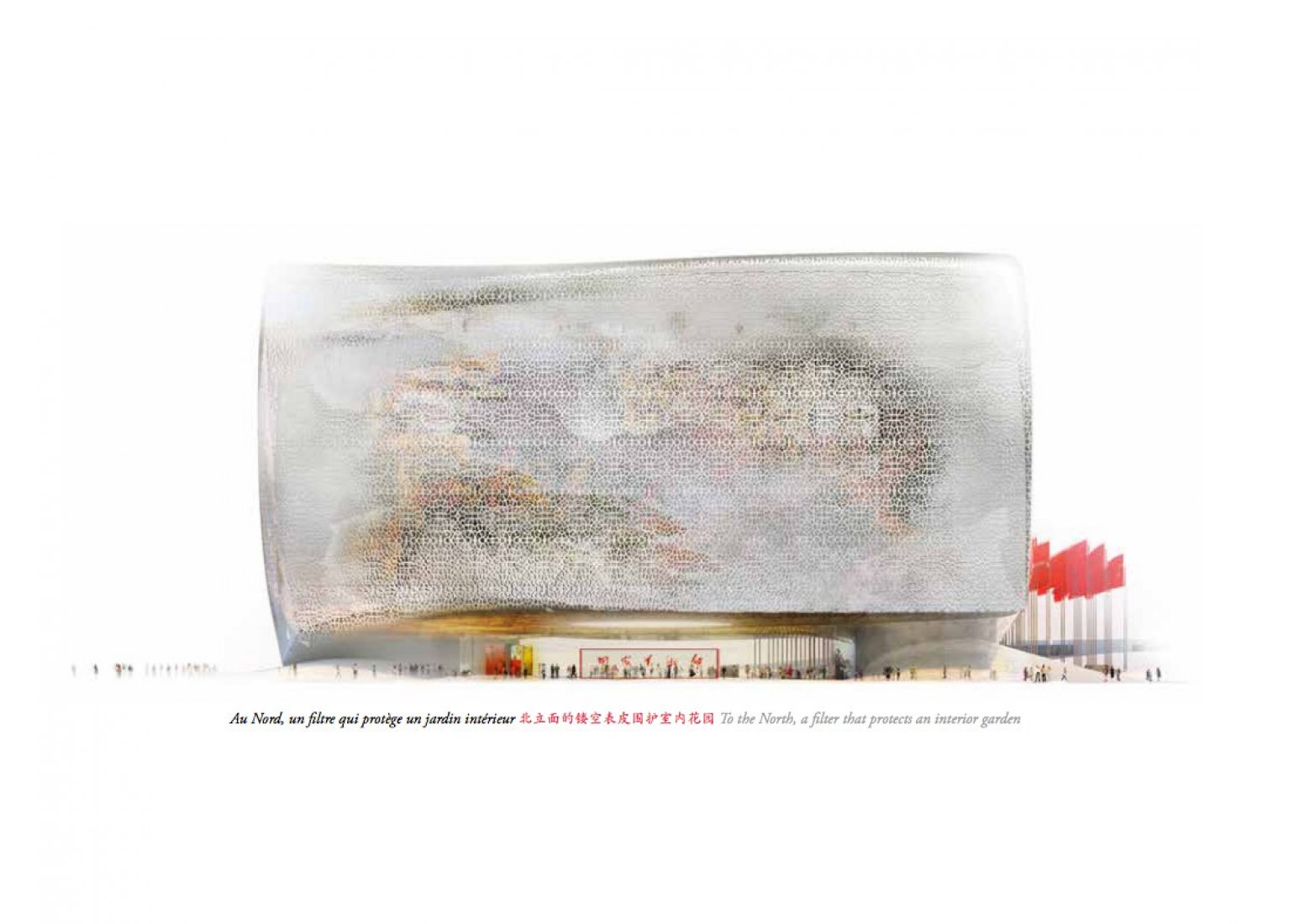 To the North, a filter that protects an interior garden. Image © Ateliers Jean Nouvel.

Jean Nouvel has unveiled the official design (previously here) for the National Art Museum of China (NAMOC). Located next to the historic axis of Beijing and symbolically connected to the Forbidden City, the new National Art Museum of China will take its place by its size (130,000 square meters and  a plot: 30,000 m²) and by the importance of its collections - from the Ming Era to today - among the greatest museums of the world.

The design for the National Museum of China (NAMOC) by Jean Nouvel features an intricately patterned perforated facade, which wraps around part of the building.

“Mountainous horizons, reflections of the trees on the boulders, reflections of the sky on the sky, green rocks and green trees, branches behind stone grates, people strolling disappearing behind the boulders, we can make out works of art in the middle of a luminous ray of light, colorful images illuminate grey cracks and crevices, yellow lichens suffer on the grey silver plated stone.”

In the introductory text used by Ateliers Jean Nouvel, a very enthusiastic declaration is made, and he said "The NAMOC represents an incredible opportunity for the most ambitious materialization of a place for expression, of communication and attraction, a place that witnesses the vitality of a civilization, the civilization of the greatest people on earth." and he add, “Our proposal is the result of one year of catalysis, of immersions, of dialogs and explorations to translate, synthesize, symbolize and materialize the spirit of the Chinese civilization. Our goal is to protect the miracles created with ink throughout the centuries, to reveal the force of a living art… to welcome the artist of tomorrow." 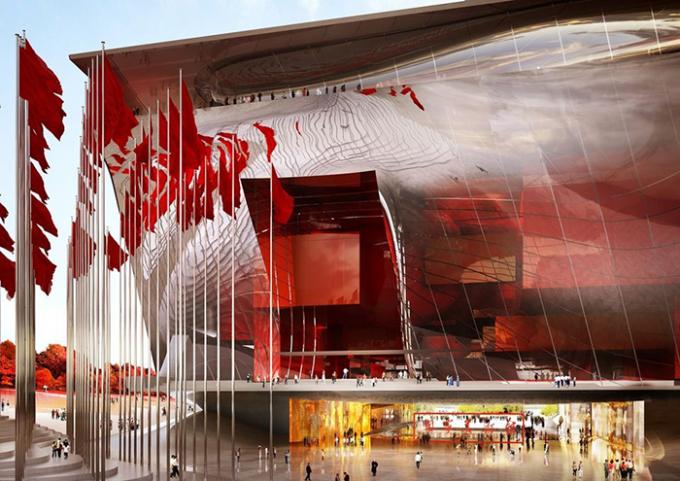 At the beginning of the XXI st century museums are still too often considered as places for conservation, consultation and education. These are useful functions, but based on conventional thinking and cultural consumption. The museums should become lively places, resonating with invention where exhibits prove that sensations and emotions triggered by art are amplified by time, by the complicit juxtaposition of works from various times, and all the eras of invention.

Three ideas defined the design of project; Catalysis, Symbiosis and Milestone. “The museum is a milestone that now establishes architecture as a civilizational medium, as the memorial symbiosis of nature and human expression. These exceptional conditions are able to elicit this rising attitude, this symbiotic response, and goes beyond being just a traditional competition of established styles. Today, the role of architecture is to catalyze, to precipitate the spirit of a situation should it be individual, plural or civilizational.”

The summer hall is overhung with a gold ceiling, inspired by the great roofs and traditional painted ceilings that can be made out from afar. This carved, gold-painted ceiling offers a sequential theoretical view of the history of Chinese art and culture from the fifteenth century up to the current day, as well as of the centuries to come... Images of major or emblematic works belonging to different periods and influences form a panorama of Chinese painting and culture. The contents will be decided in consultation with the most eminent Chinese and international specialists.

A collaboration with the Beijing Institute of Architectural Design (BIAD), the museum project is the result of an international competition that won Jean Nouvel over Rem Koolhaas, Zaha Hadid, Frank Gehry and others. 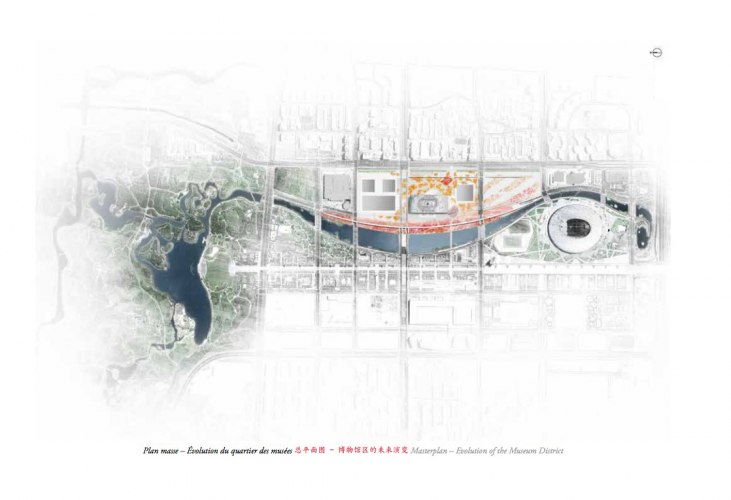 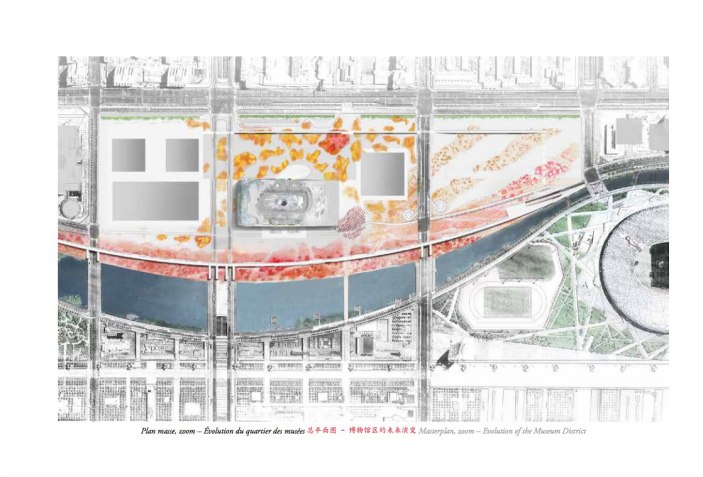 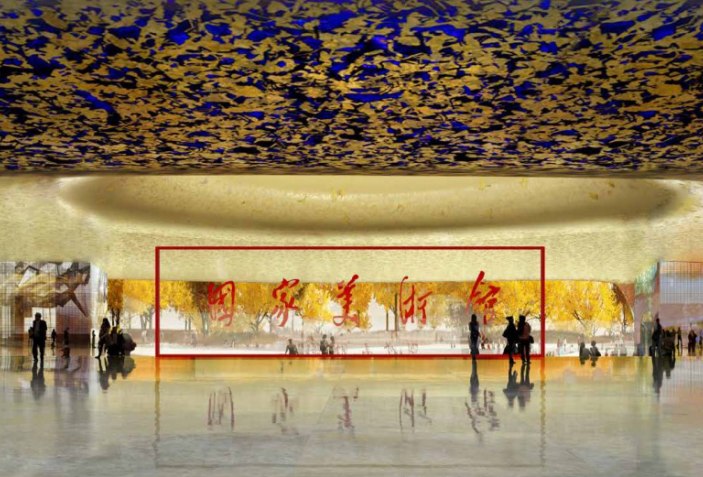 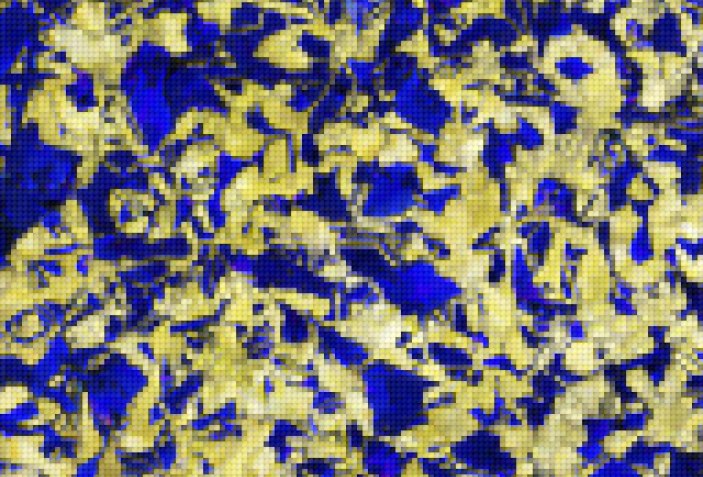 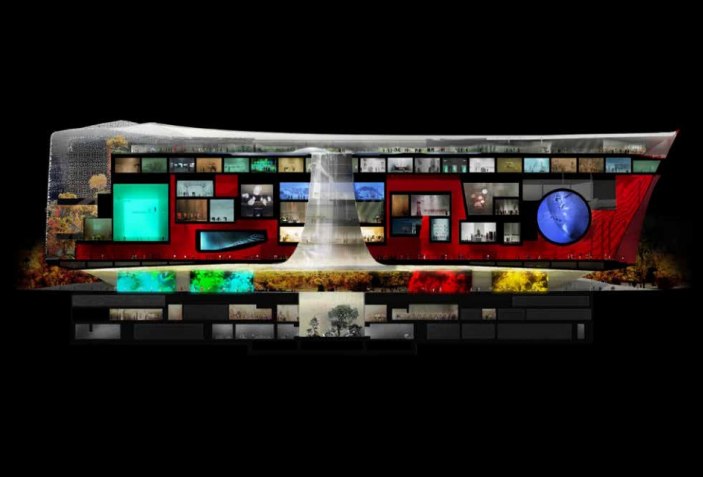 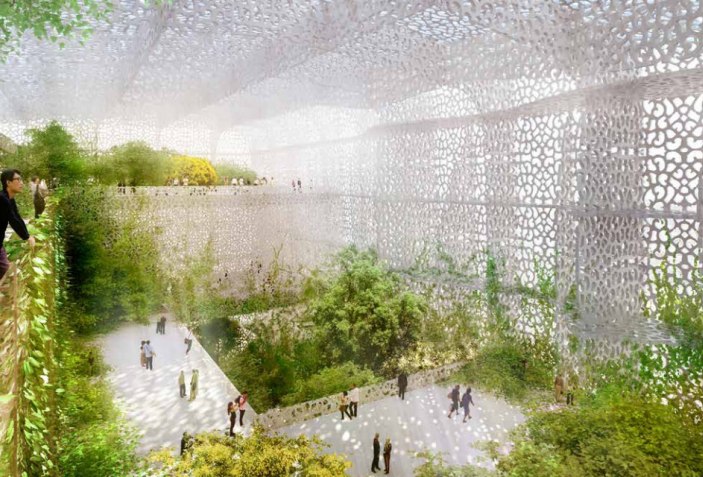 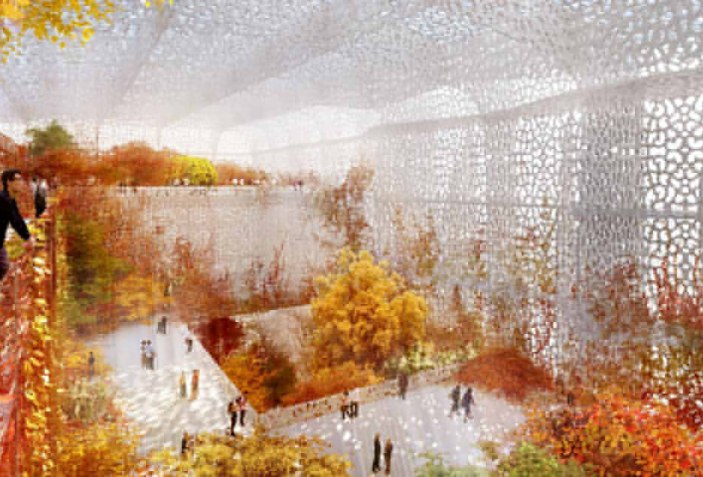 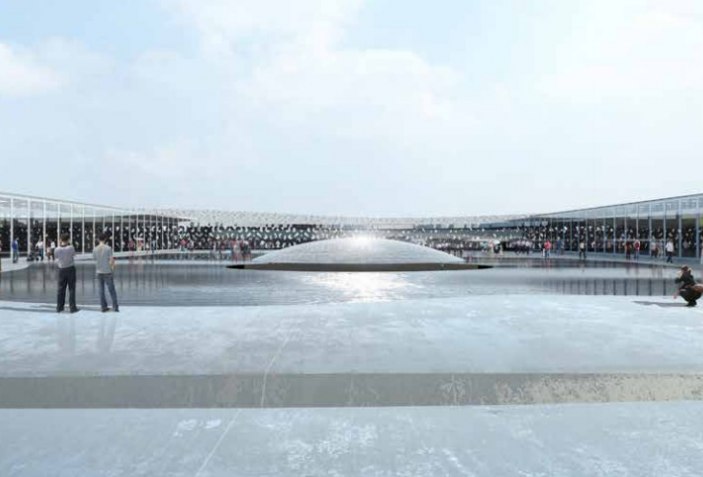 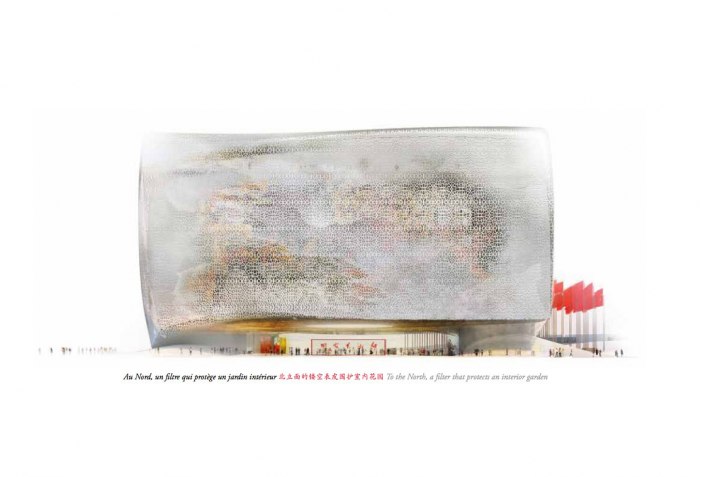 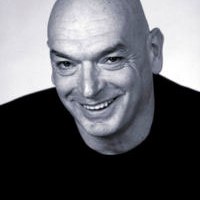 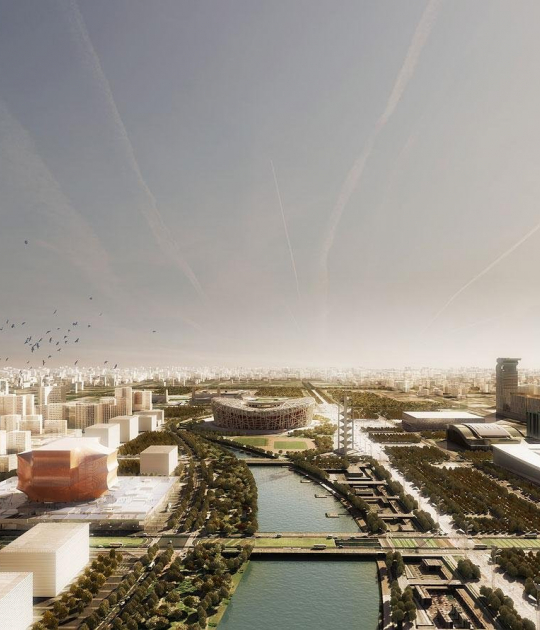 OMA: Proposal for NAMoC in Beijing 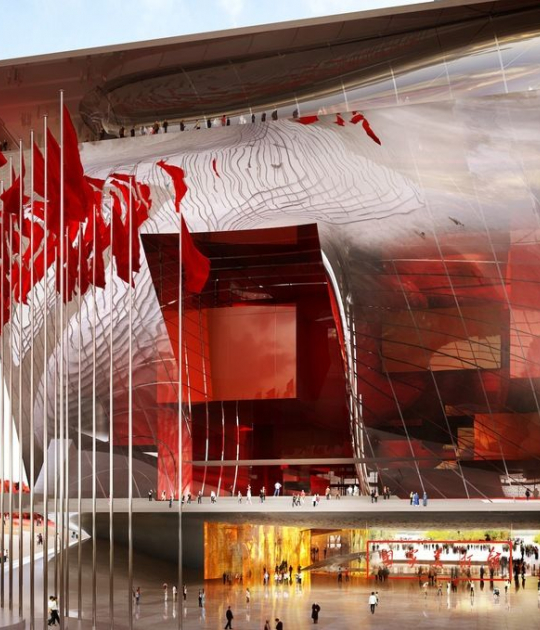 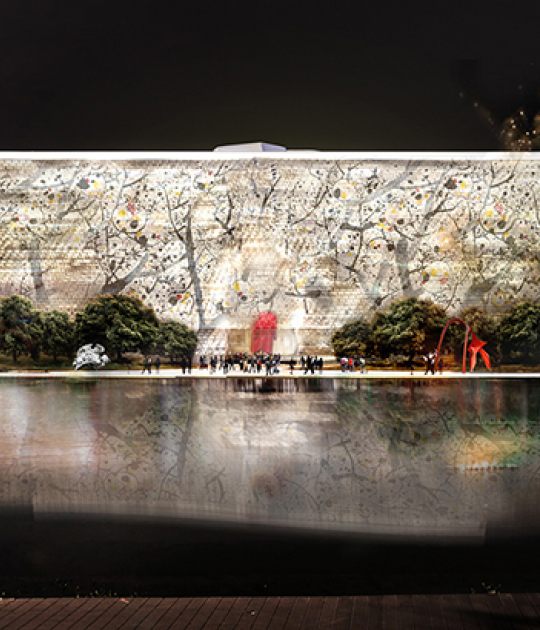 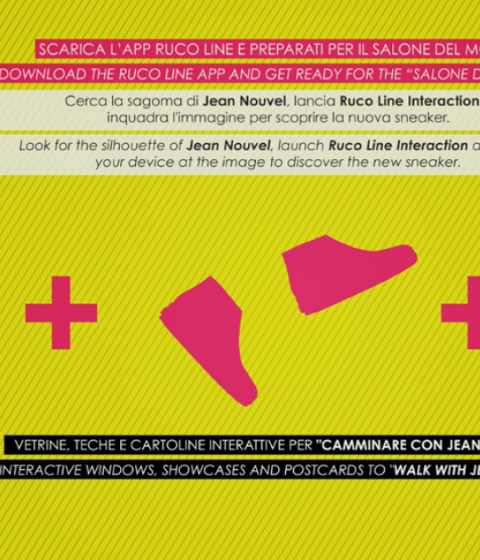 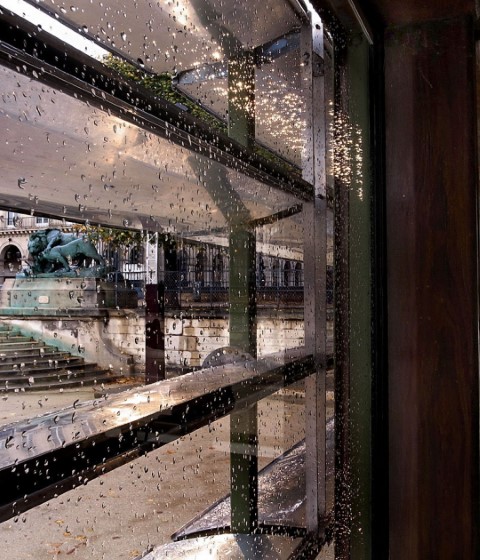