OMA is known for its ideas on renovating buildings and defending preservation combined with innovation, from the Fondazione Prada in Milan to the Moscow Museum of Contemporary Art Garage. On setting out to design the New Museum’s expansion in adjacent property — a former restaurant supply company on the Bowery — the architects initially planned to work within the existing structure. 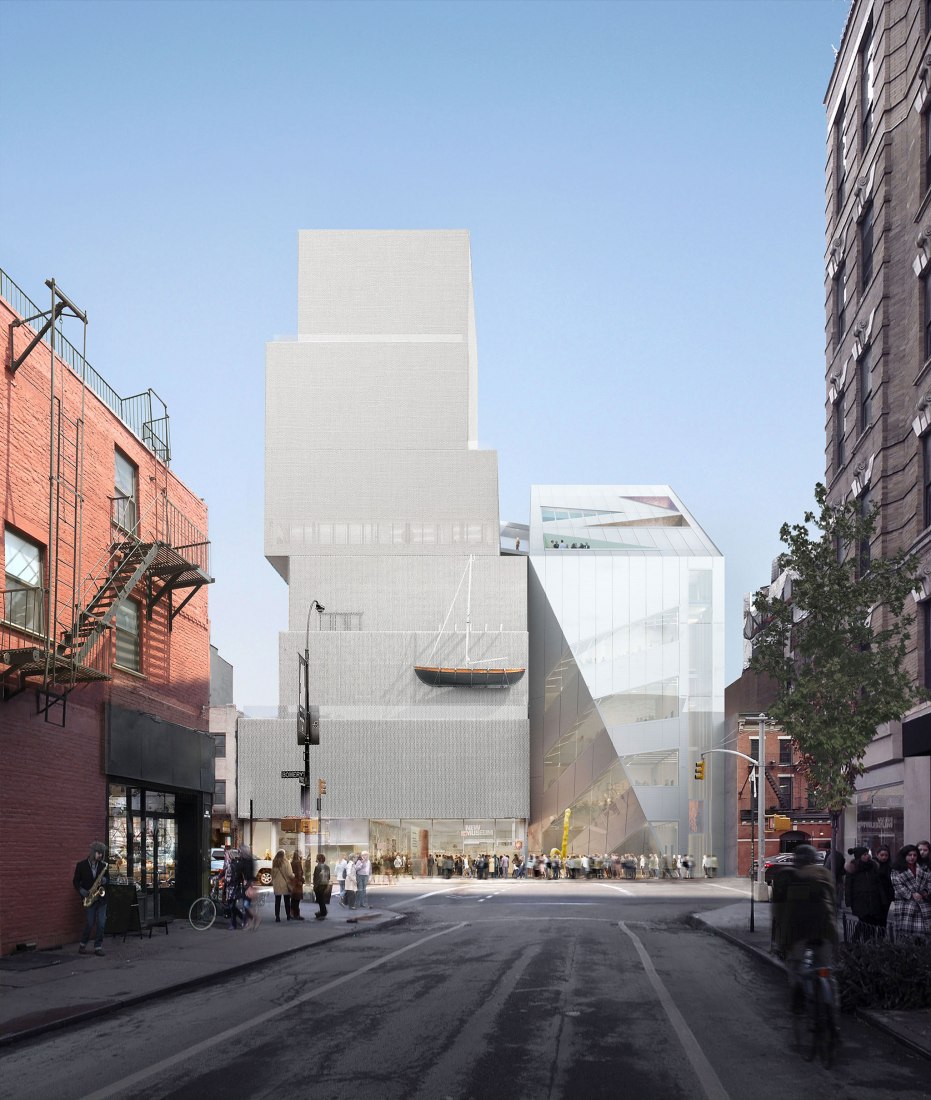 Rendering of the New Museum and its addition, seen from Prince Street, shows how the materials of OMA’s addition, at right, pays tribute to Sanaa’s rough-hewed pointillist look, at left. The addition’s facade is made of a mesh that appears metallic during the day. Image courtesy of OMA and Bloomimages. 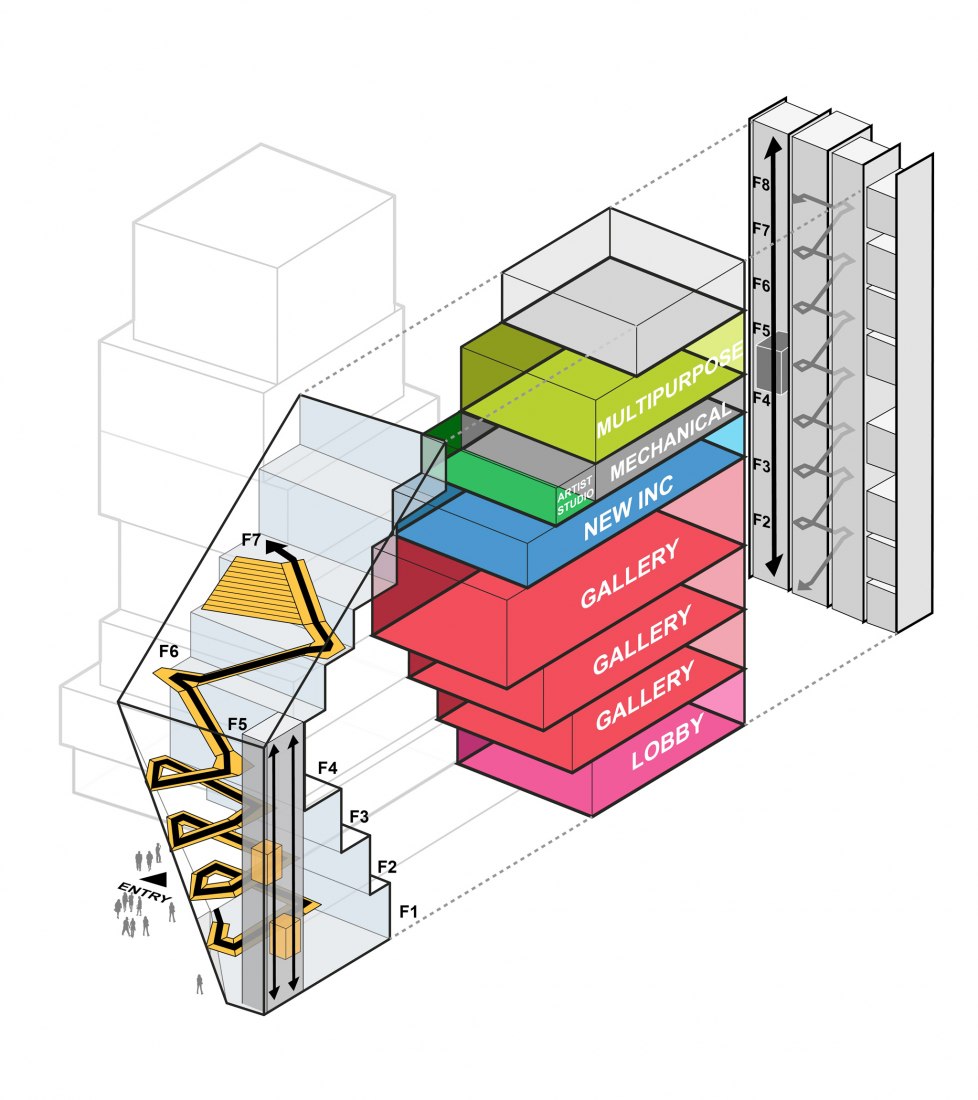 The new addition, showing the atrium stairway that recalls the external fire escapes of the formerly industrial neighborhood. It calls for a larger, more welcoming lobby across both buildings and connections across all seven floors. Image courtesy of OMA. 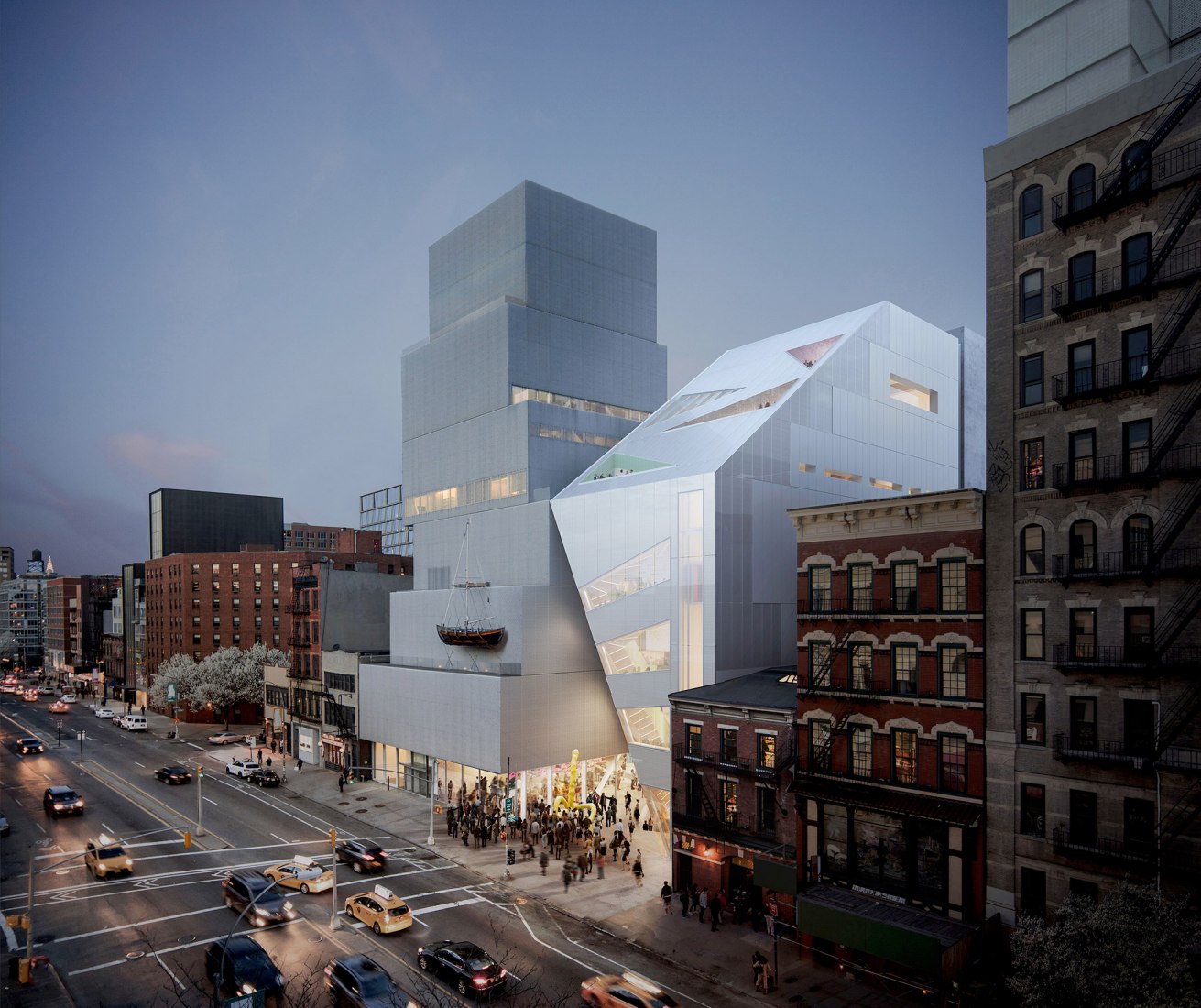 Rather than renovate its adjacent building on the Bowery, the New Museum, above left in this rendering, will take it down and start over. Rem Koolhaas’s architectual firm, OMA, is creating a light-filled addition, right, that will connect to existing space on every floor, double the museum’s gallery space, and create a public plaza. Image courtesy of OMA and Bloomimages. 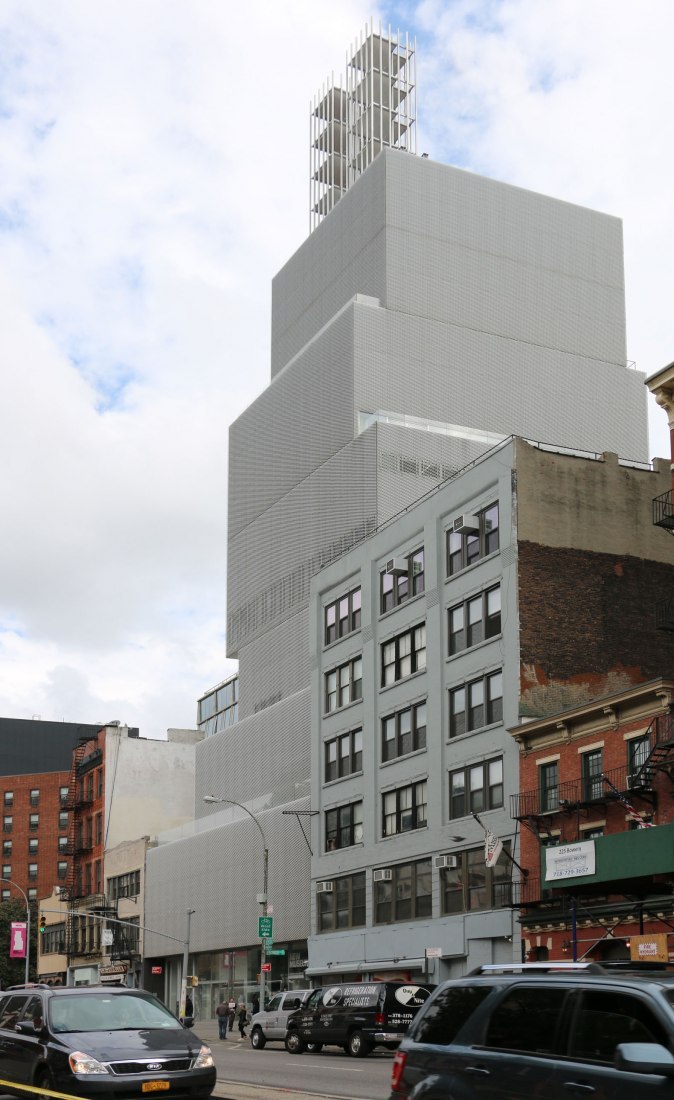 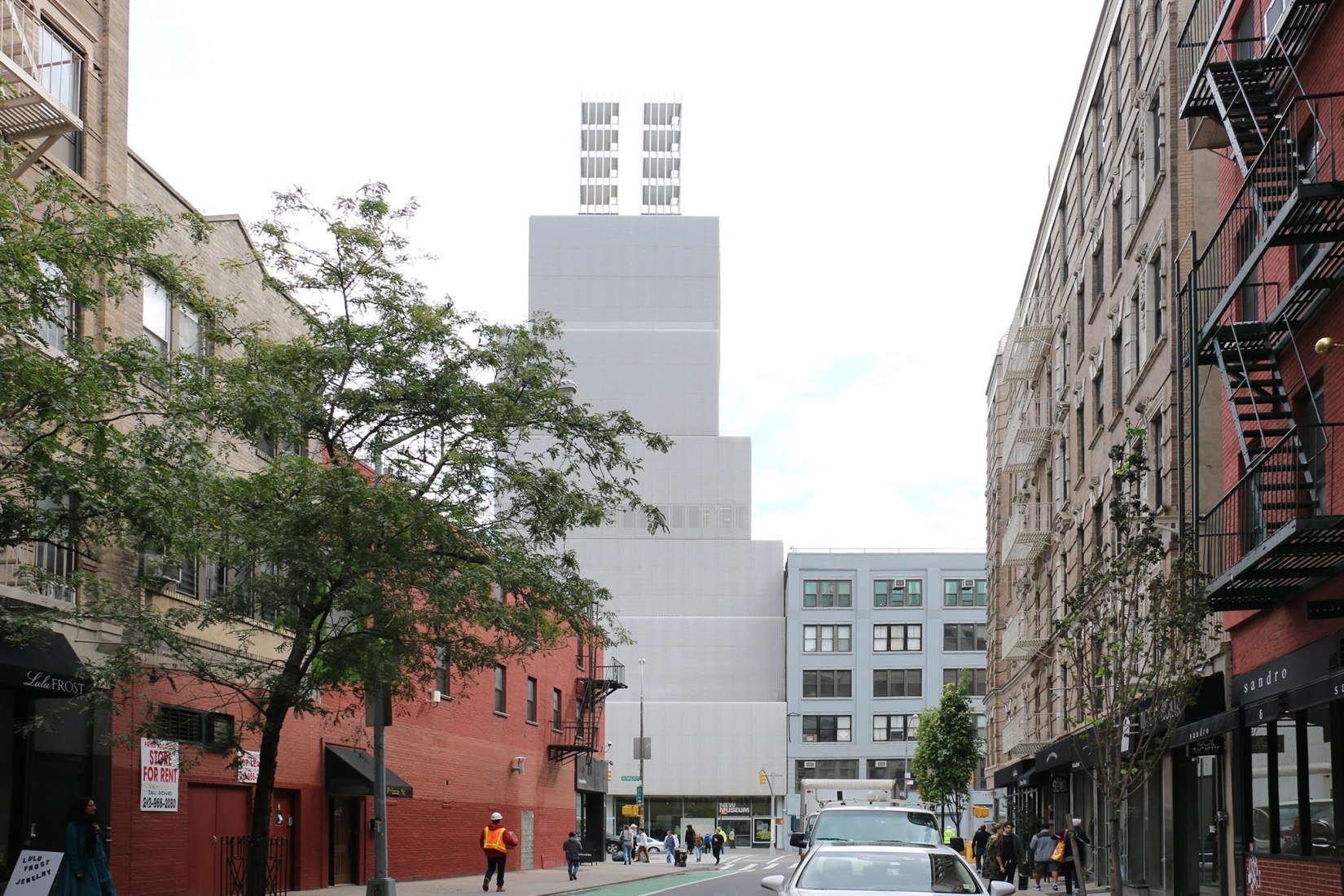 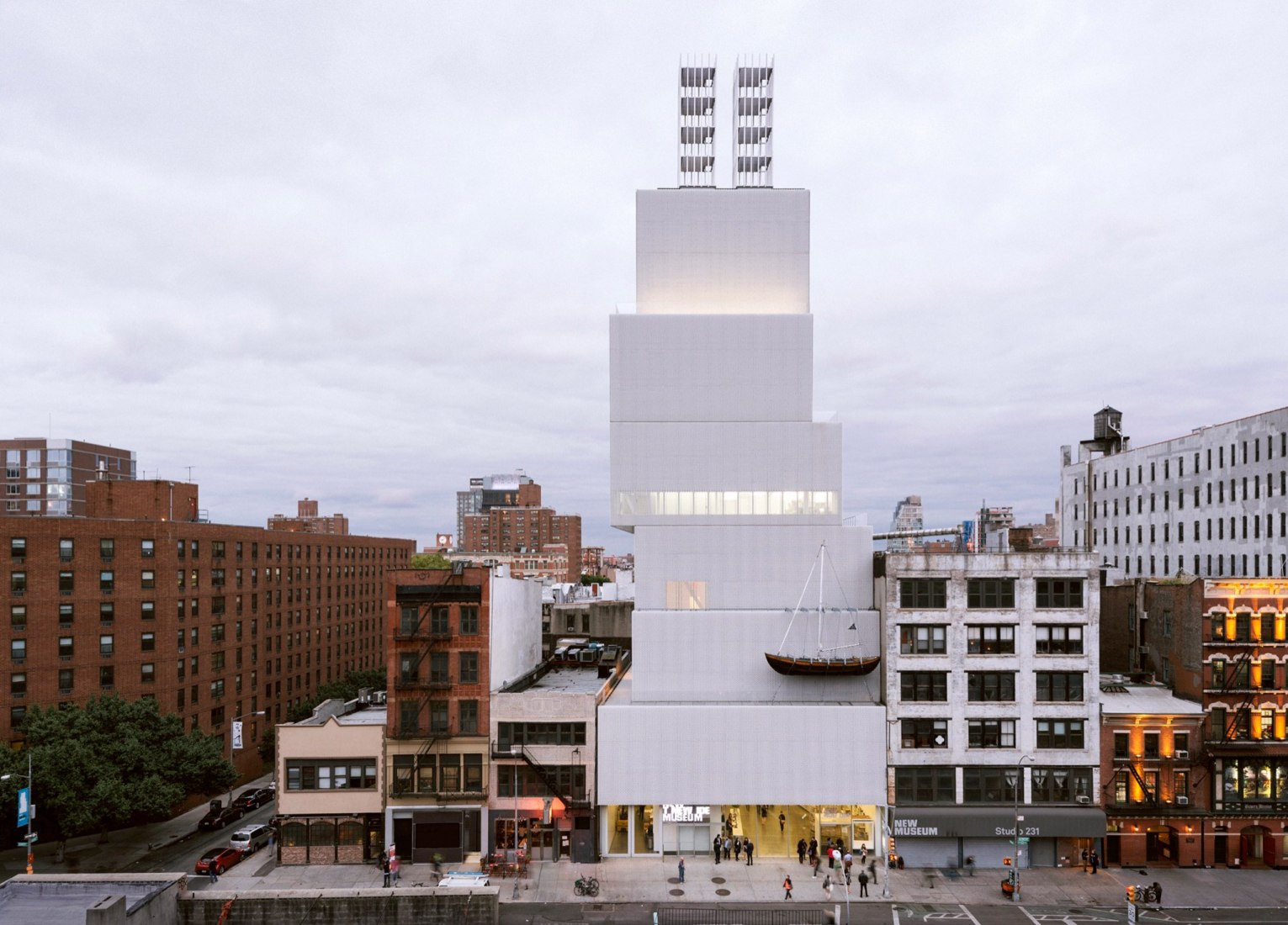 However, the new proposal, designed by OMA partner Shohei Shigematsu in collaboration with Cooper Robertson, soon showed that this way would cost more and compromise the galleries. Even if the new building’s floors were removed to gain more height, its facade was all that could be saved. So OMA started from scratch: today it will reveal its proposal for a geometric new structure, of  60,000-square-foot addition, that aims to integrate the current New Museum, yet have its own distinct identity.

According to a press release announcing the project, the wedge-shaped addition is designed to “complement and respect the integrity” of the flagship museum, which opened in 2007.

Though the New Museum does not maintain a permanent collection of its own, the institution has been remarkably popular since its opening. Annual attendance at the museum has skyrocketed from roughly 60,000 to over 400,000 visitors in recent years, while the museum’s staff has quintupled to 150 workers.

‘Our new building establishes its own distinct identity yet it is highly connected to the existing museum. We wanted to create a highly public face — starting from the exterior plaza and atrium stair to terraced multipurpose rooms at the top — that will be a conduit of art and activities that provides an openness to engage bowery and the city beyond.’
OMA partner Shohei Shigematsu

Description of project by OMA

The New Museum announced today plans for its second building, designed by OMA / Shohei Shigematsu. This will be OMA’s first public building in New York City. The new structure will complement and respect the integrity of the adjoining SANAA-designed flagship building, while asserting its own distinct identity. The seven story, 60,000 square foot building will include three floors of galleries, doubling the Museum’s exhibition space, along with additional space for the Museum’s many community and education programs, a permanent home for NEW INC, as well as increased public amenities and improved vertical circulation.

“Our new building establishes its own distinct identity yet it is highly connected to the existing museum. The new New Museum will be a synergistic pair working spatially and programmatically in tandem, offering a repertoire of spaces to match the institution’s curatorial ambitions and diverse programs. A counterpart to the existing tower’s verticality and solidity, the new building will expand the galleries horizontally and reveal the vertical circulation through a transparent facade. We wanted to create a highly public face—starting from the exterior plaza and atrium stair to terraced multipurpose rooms at the top—that will be a conduit of art and activities that provides an openness to engage Bowery and the city beyond.”


The OMA building will replace the current 50,000 square foot building at 231 Bowery which was acquired nearly twelve years ago to provide additional space for expanded programs. During that time, the Museum has steadily used the building to capacity for a range of activities including additional gallery space, the Museum’s cultural incubator NEW INC, office space for Rhizome and IdeasCity, studio space for artists, archives, and back-of-house staging, prep, and storage.

Following extensive research and study of many options, including renovating the existing building, the Museum concluded that new, ground up construction would be the most efficient way, both spatially and financially, to fulfill the Museum’s needs and civic purpose. The OMA building will improve vertical circulation with the addition of an atrium stair, which will offer views over the surrounding neighborhood. The stair and new entry align to the terminus of Prince Street, opening up the museum to the city. The building will also provide three new elevators (two of which are dedicated to galleries) and additional public spaces and services, including an expanded lobby and bookstore, an upper level forum connecting to the existing Skyroom, and a new 80-seat restaurant. The building also provides space for a more efficient organization of vital back of house, storage, and office space.

Adding a total of 10,096 sq. feet of exhibition space, the new galleries will connect with the existing galleries on three levels (second, third, and fourth floors), with the ceiling heights aligning on each floor, creating expanded space for exhibitions and horizontal flow between the buildings. The expanded spaces can be used singularly across the floor-plate to host larger exhibitions or separately for diversity and curatorial freedom. The organization of new galleries and program spaces will support a stronger integration between exhibition programs, education, research, residencies and community outreach programs will help expand the Museum’s audiences.

The layout of the building program is as follows: lower levels devoted to back of house and storage; the ground floor to feature a new restaurant, expanded lobby, and bookstore, along with a public plaza set back at street level; second, third, and fourth floors for galleries; fifth floor for NEW INC; sixth floor for an artist-in-residence studio, as well as a forum for events and gathering, which leads to the seventh floor for Education programming and additional events; and an atrium stair on the west façade, connecting each of the floors, along with an elevator core at the front and rear.

The new building’s façade is another notable attribute of OMA’s design. Using a laminated glass with metal mesh, the façade will provide a simple, unified exterior alongside the SANAA building, with a material that recalls and complements the SANAA façade, yet allows for a higher degree of transparency. The OMA building will communicate the activities of the Museum outwards while creating a more inviting presence drawing the public inwards. 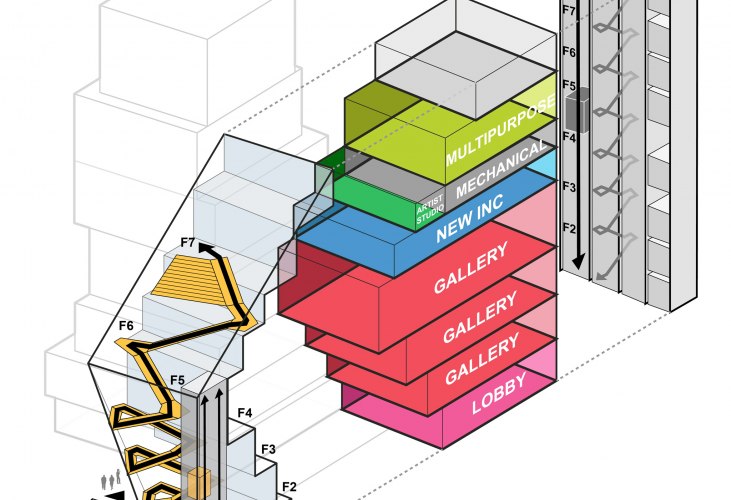 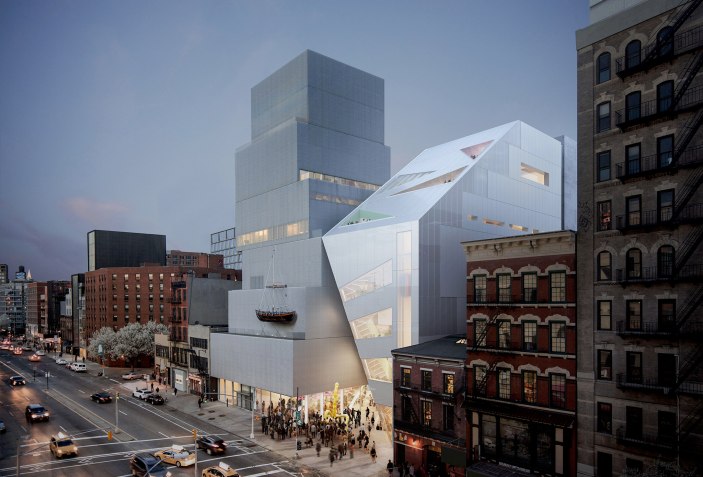 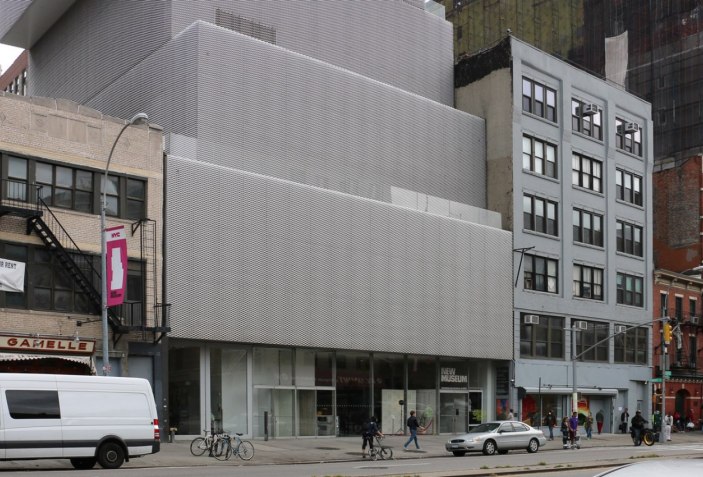 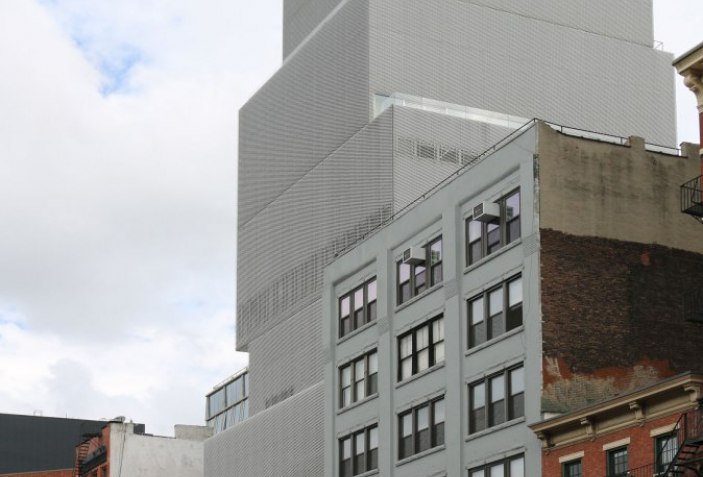 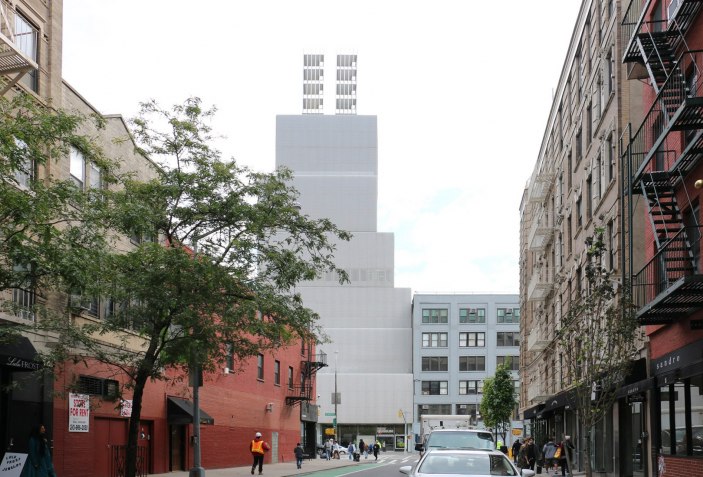 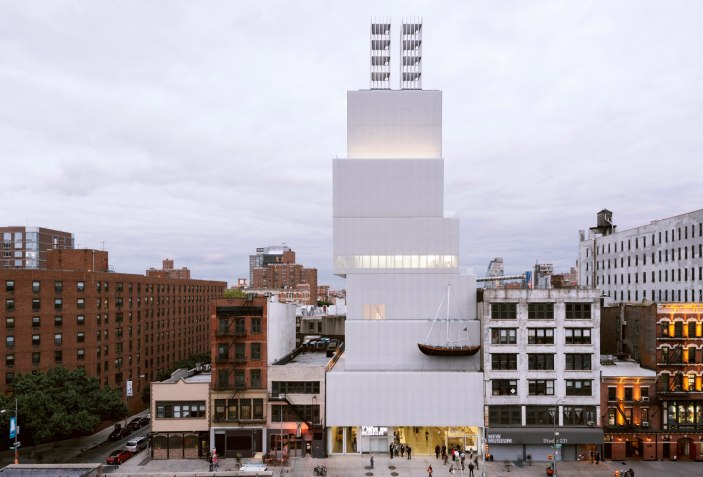 Responsible for OMA’s operations in America, OMA New York was established in 2001 and has since overseen the successful completion of several buildings across the country including Milstein Hall at Cornell University (2011); the Wyly Theater in Dallas (2009); the Seattle Central Library (2004); the IIT Campus Center in Chicago (2003); and Prada’s Epicenter in New York (2001). The office is currently overseeing the construction of three cultural projects, including the Musée National des Beaux-arts du Québec and the Faena Arts District in Miami Beach – both scheduled for completion in 2016 – as well as a studio expansion for artist Cai Guo Qiang in New York. The New York office has most recently been commissioned to design a number of residential towers in San Francisco, New York, and Miami, as well as two projects in Los Angeles; the Plaza at Santa Monica, a mixed use complex in Los Angeles, and the Wilshire Boulevard Temple. 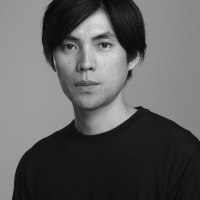 Shohei Shigematsu born in Fukuoka Prefecture, Japan in 1973. In 1996 graduated from the Department of Architecture at Kyushu University. Studying at the Berlage Institute in Amsterdam. He became an associate since 2004.joined OMA in 1998 and became a partner in 2008.

He has led the office in New York since 2006. Sho's designs for cultural venues include the Quebec National Beaux Arts Museum and the Faena Arts Center in Miami Beach, as well as direct collaborations with artists, including Cai Guo Qiang, Marina Abramovic and Kanye West.

Sho is currently designing a number of luxury, high rise towers in San Francisco, New York, and Miami, as well as a mixed-use complex in Santa Monica. His engagement with urban conditions around the world include a new civic center in Bogota, Colombia; a post-Hurricane Sandy, urban water strategy for New Jersey; and a food hub in Louisville, Kentucky.

He is a design critic at the Harvard Graduate School of Design, where he is conducting a research studio entitled Alimentary Design, investigating the intersection of food, architecture and urbanism. 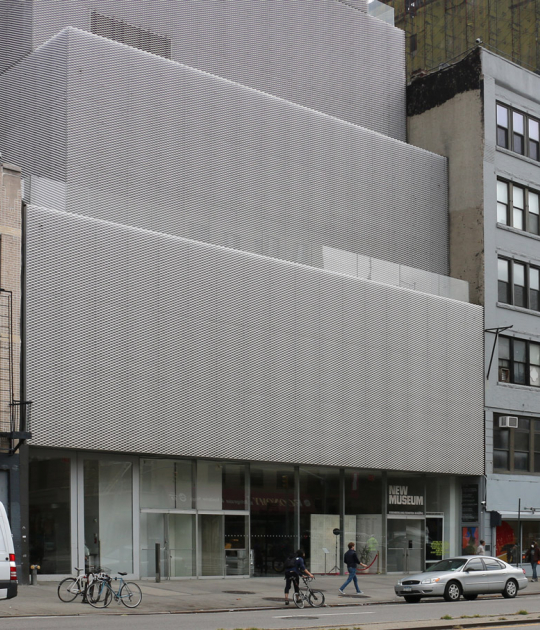 OMA selected to design Next Phase of Expansion of New Museum 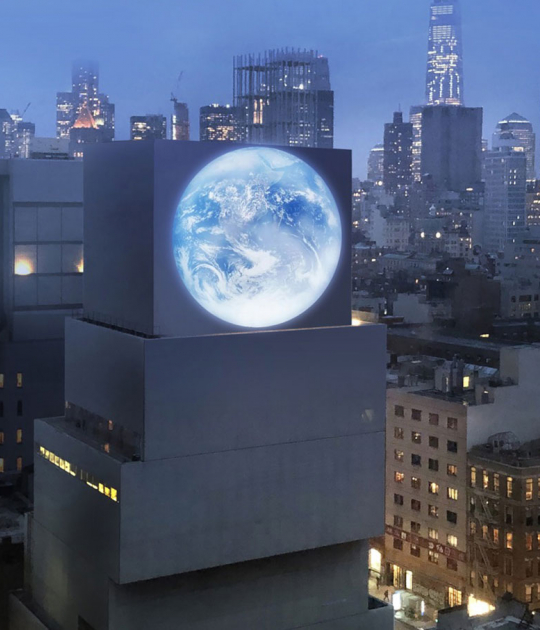 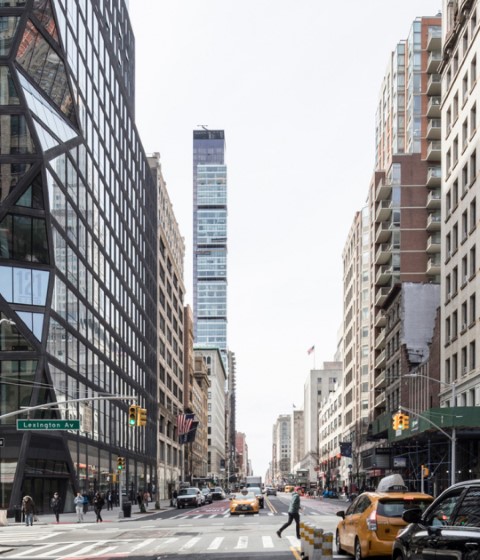 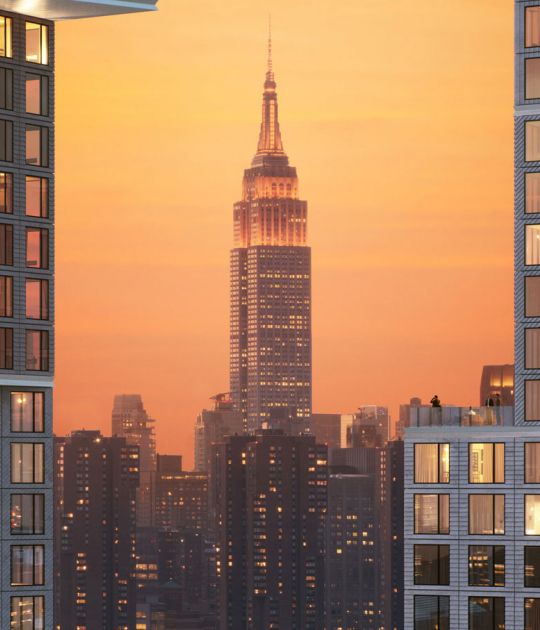 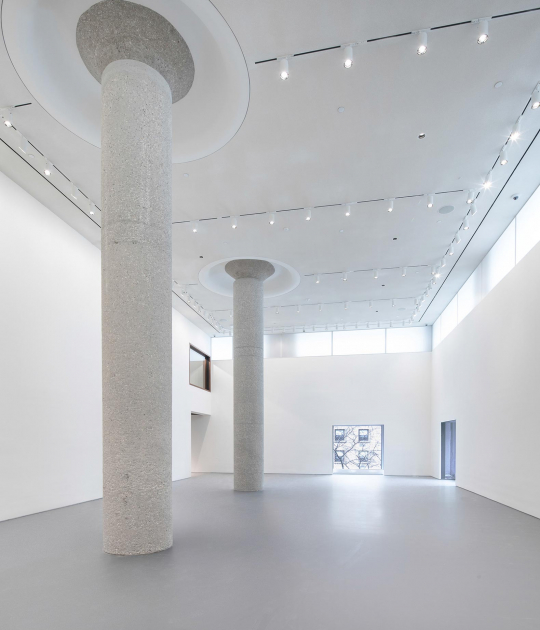