es
As an architect does not only lives by new works, we present the renovation of an apartment in Barcelona, by Pere Buil and Toni Riba. This study of young architects shows the connection between the freshness of the new generations in architecture, coupled with the respect for history and the pre-existing. 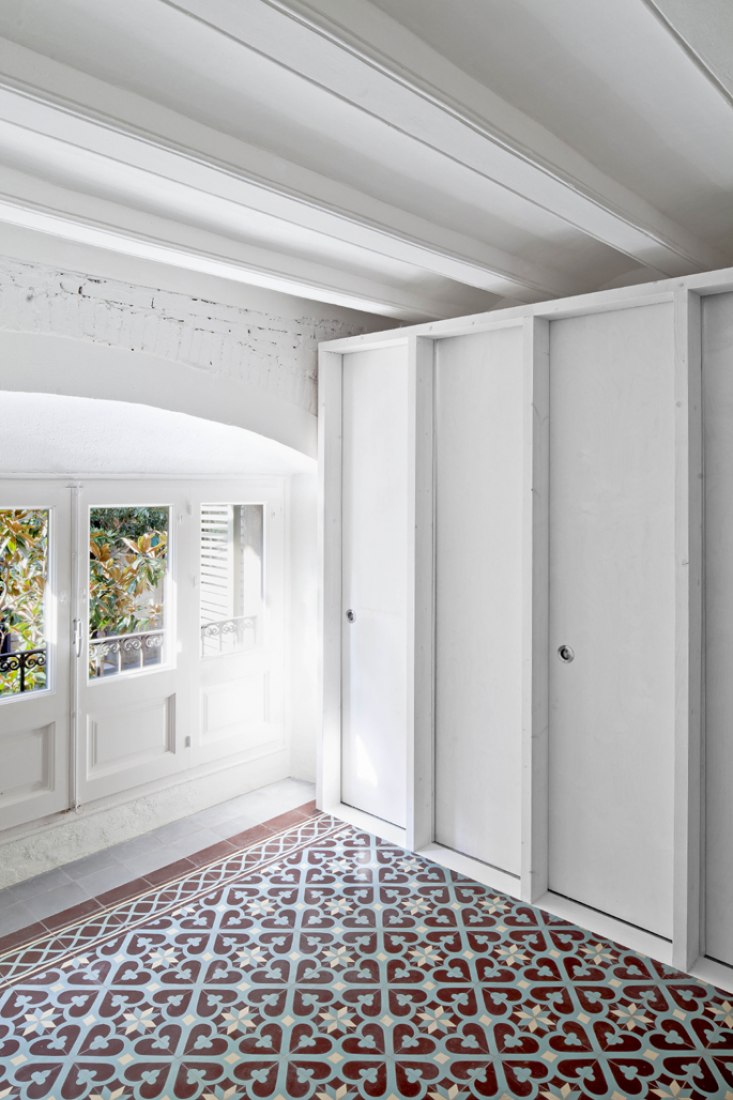 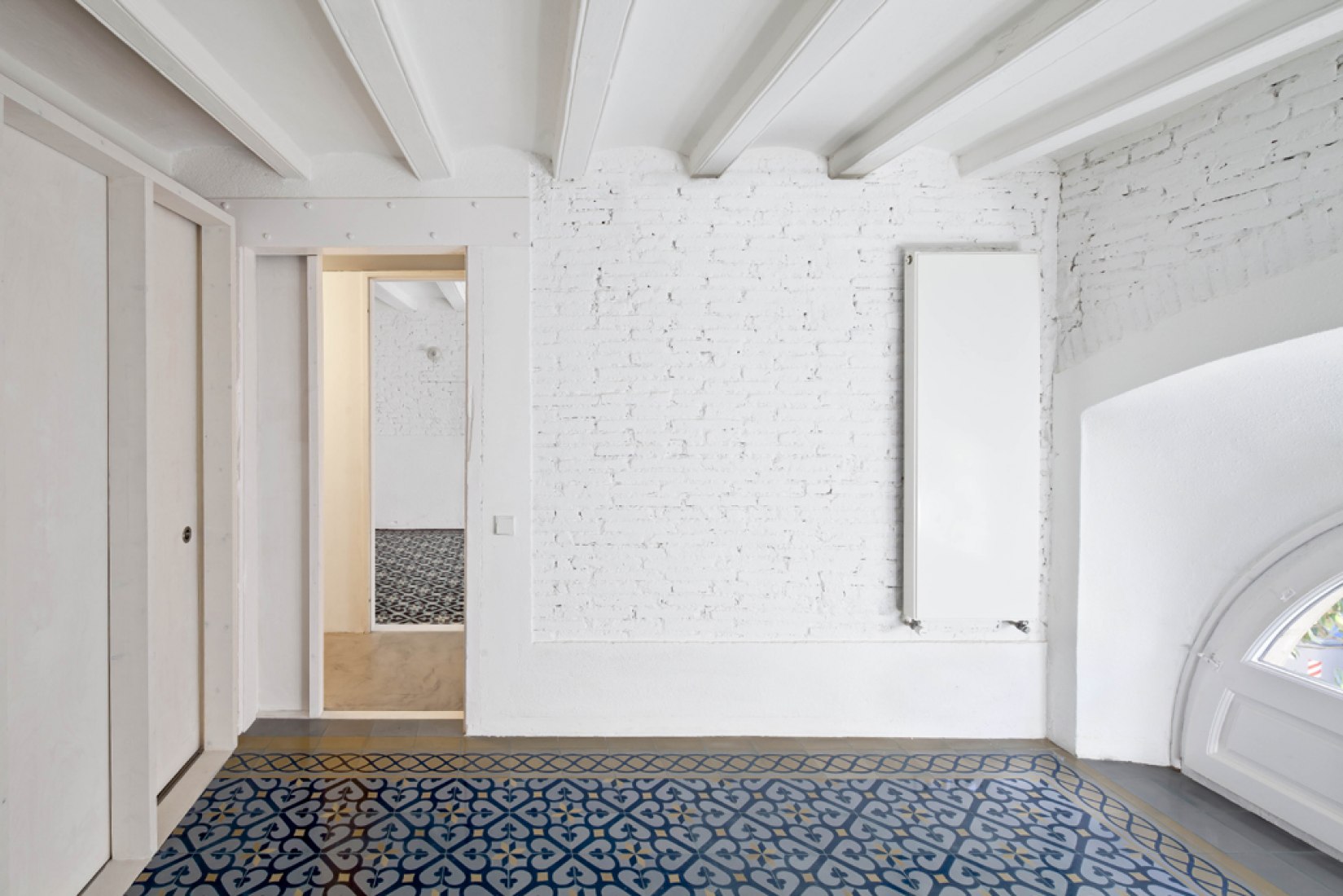 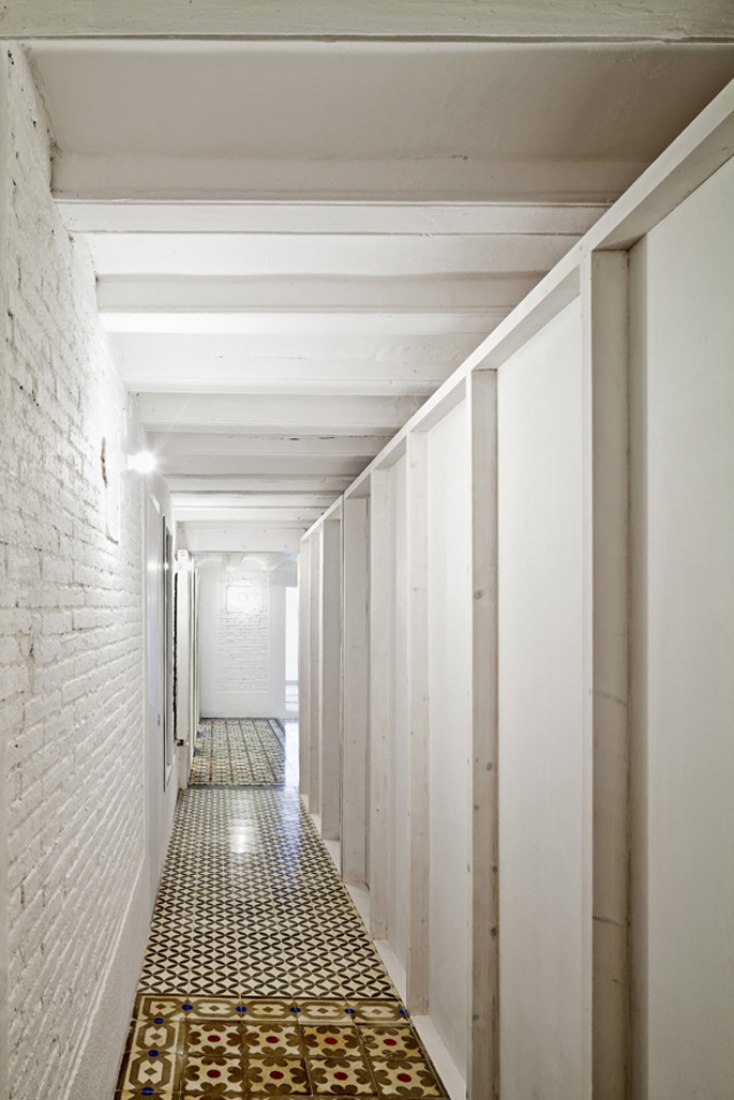 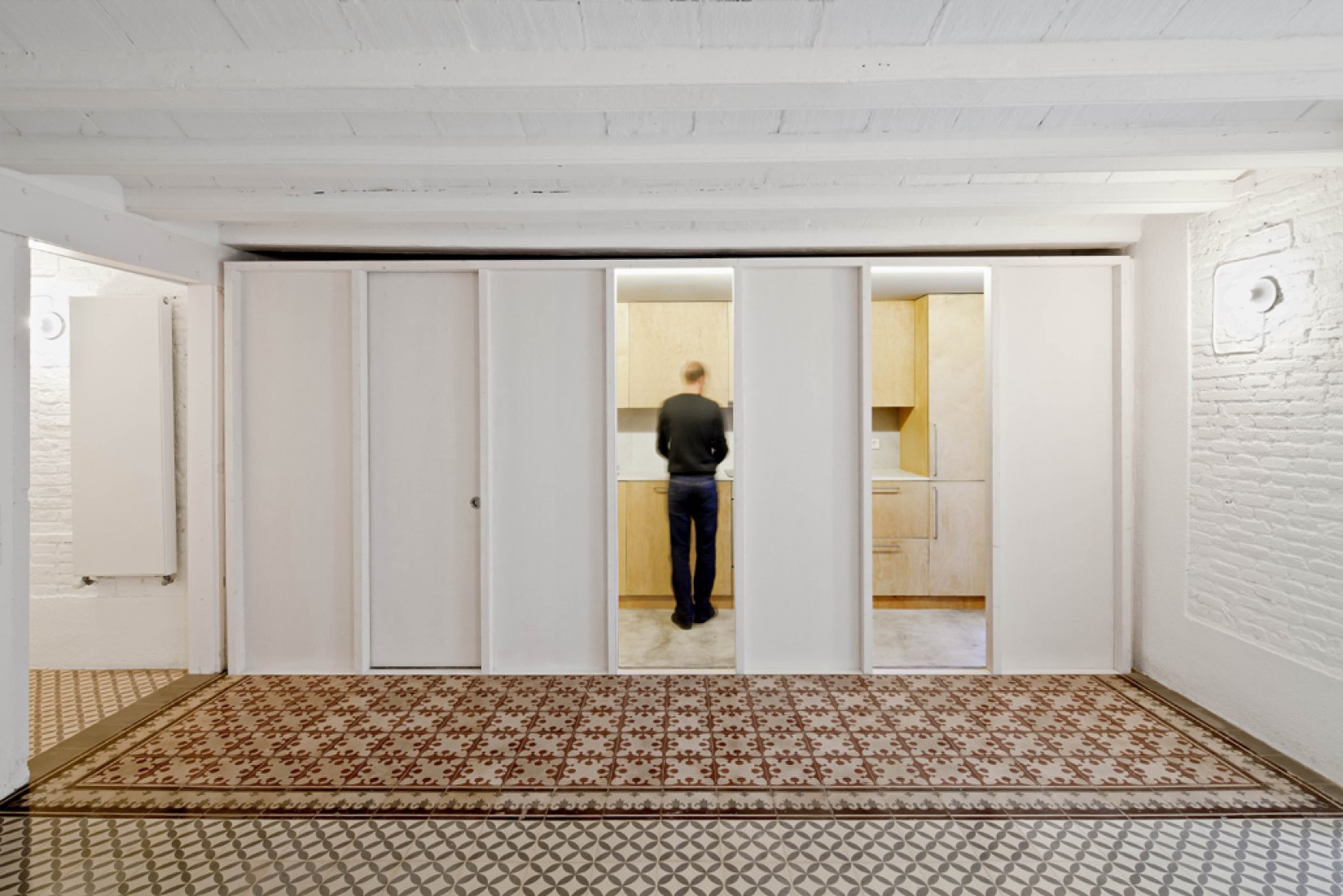 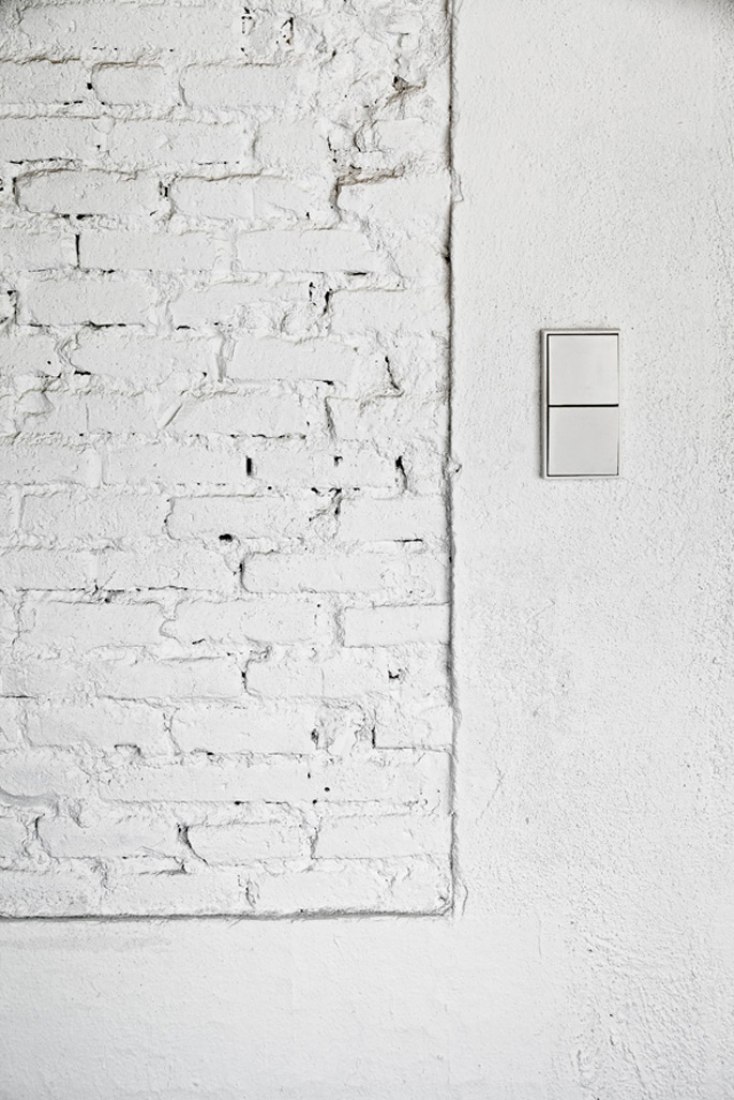 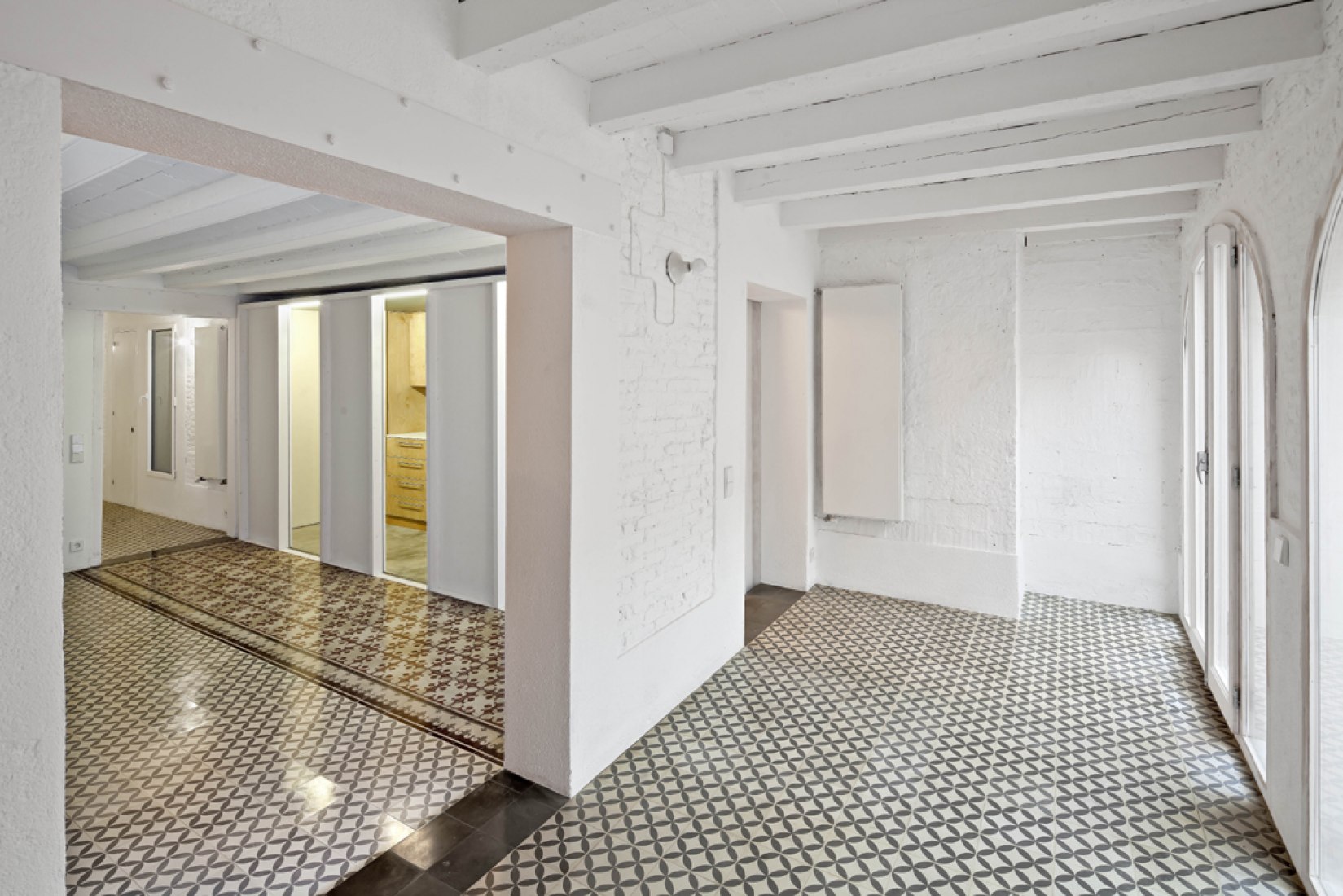 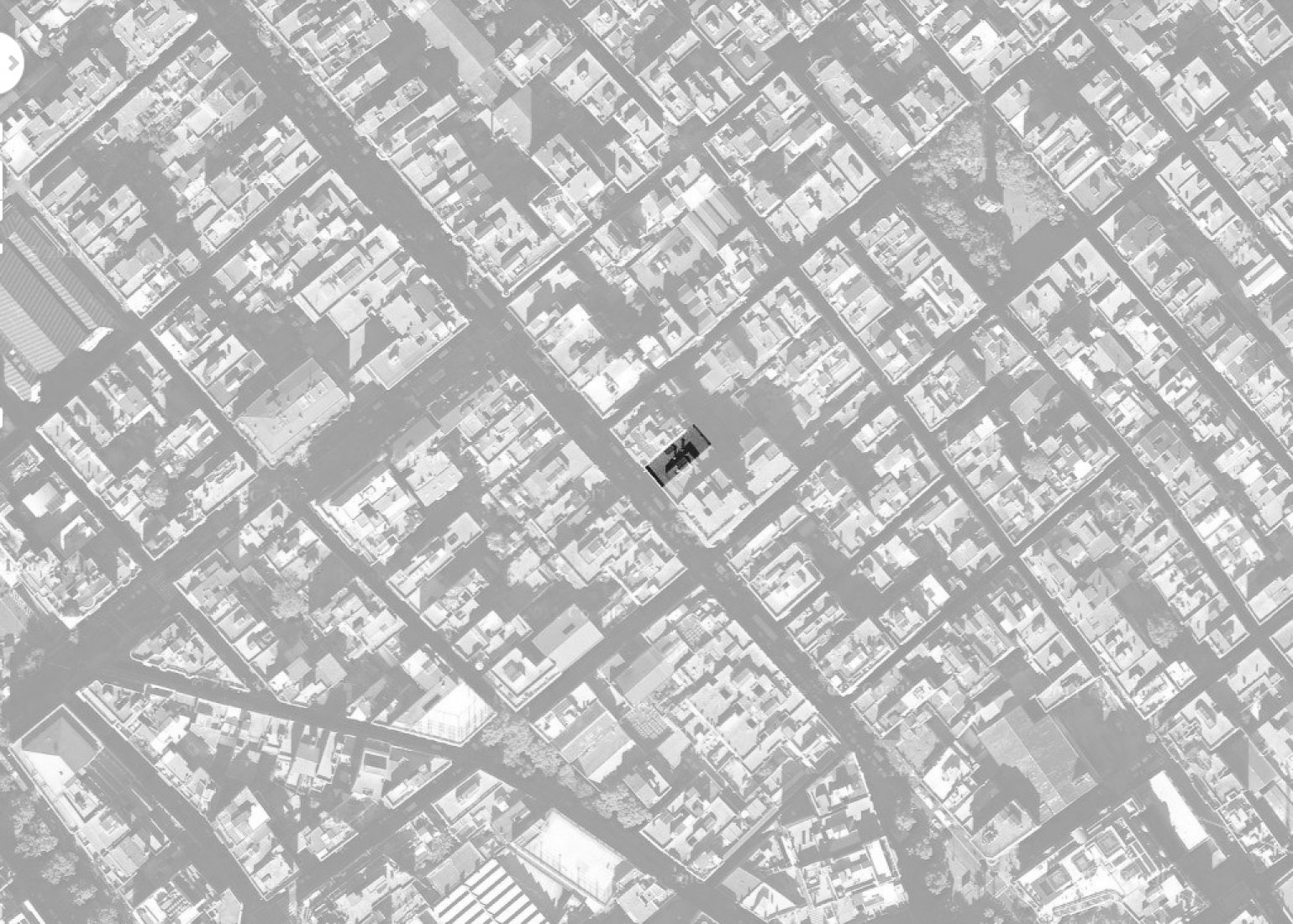 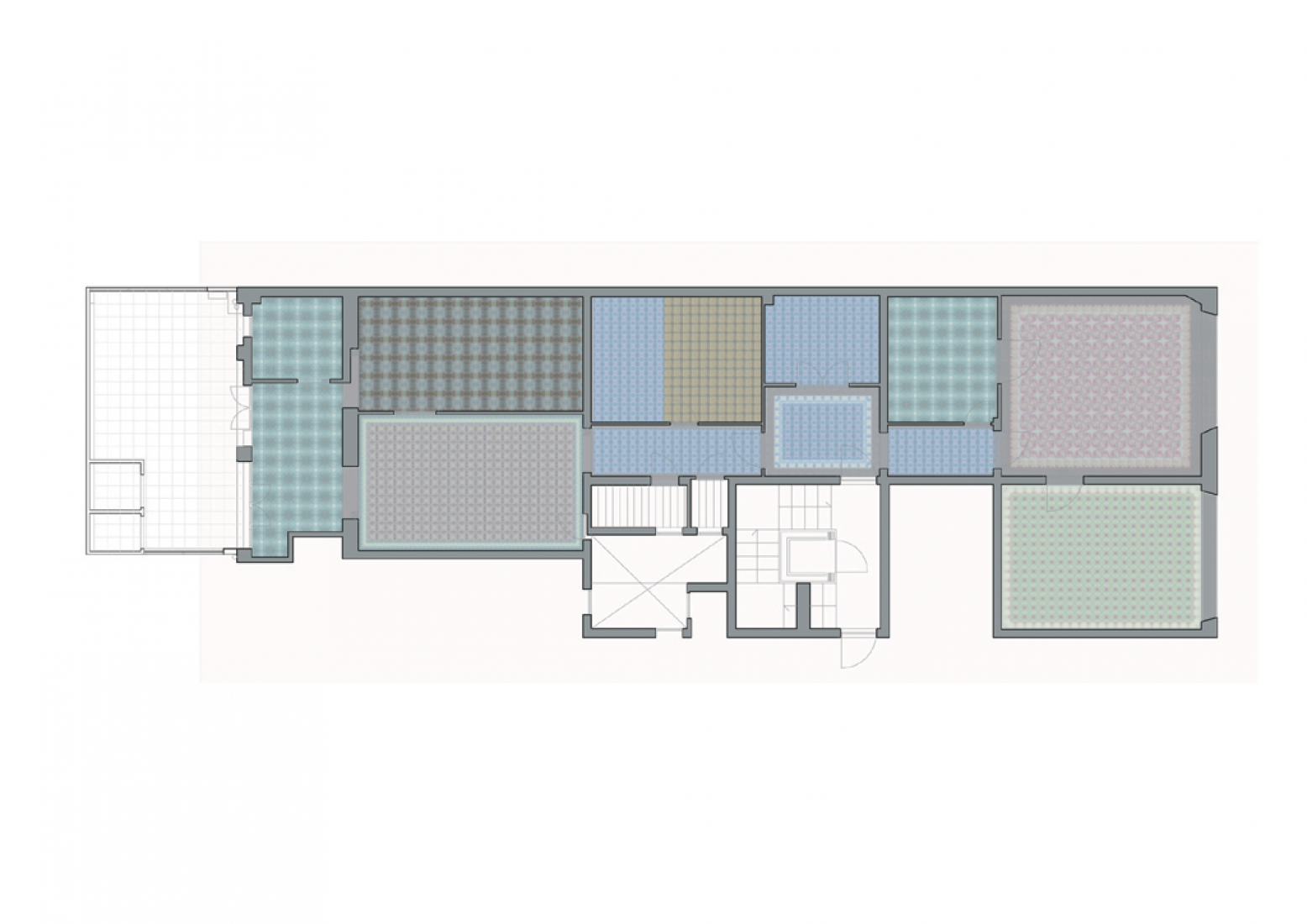 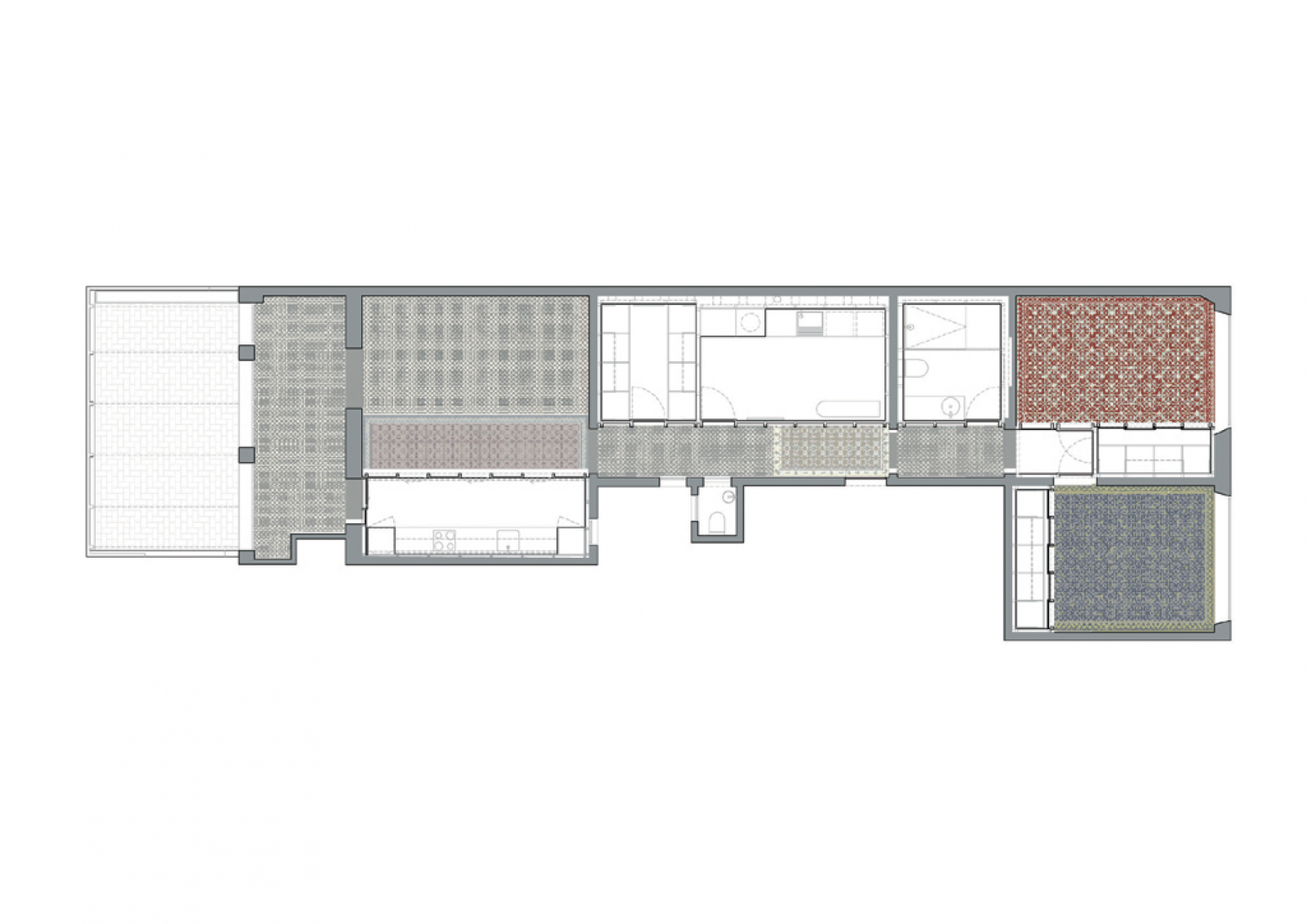 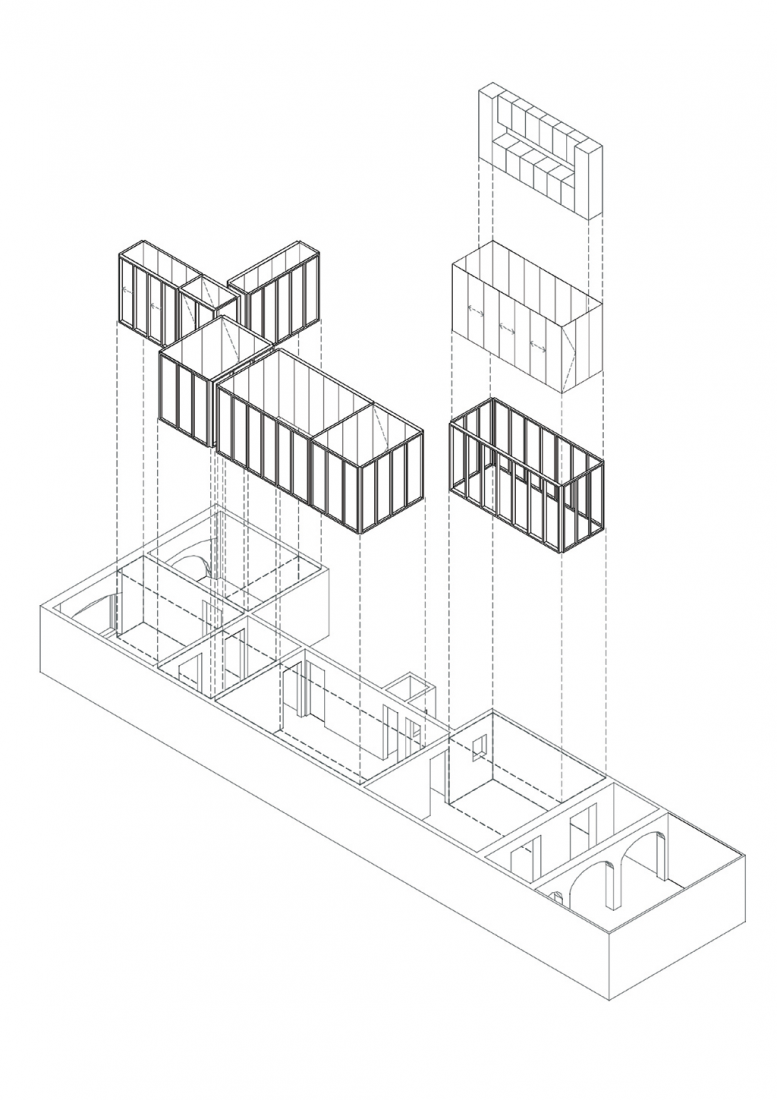 Following the ideas of reuse and transformation, they come to defining the essential elements of space through the removal of existing accessory elements in walls and ceilings. This cleaning, that is strategic rather than "hygienic" preserve, on the walls, traces, marks, layers of paint...allowing the groundwork for consolidation (structural reinforcements, few cracks, confinement) and "critical" replacements. Pere Buil and Toni Riba have achieved to allow a reading on the floor of the original distribution in smaller rooms, and a colour homogeneization and optimization of natural light.

Before our intervention, in this apartment overlapping stages were visible. Several uses through time accumulated layer over layer. At a first glance one could feel a strange and blurred atmosphere. But beyond confusion we could realise the power of its original defining features: a sequence of linked spaces separated by a powerful rhythm of bearing walls; the distinction of space hierarchy through different mosaic floors; big wood windows, etc.

A self-enclosed modules (boxes) contain services and storages, with a substructure apparent wood studs to the outside (such as packaging, it is important to the inside). The facilites are strategically concentrated in the gaps between "boxes" and placeholder to avoid races in the pre-existence. The "boxes" are finished in white with veladura, combining up chromatically to the containing space. 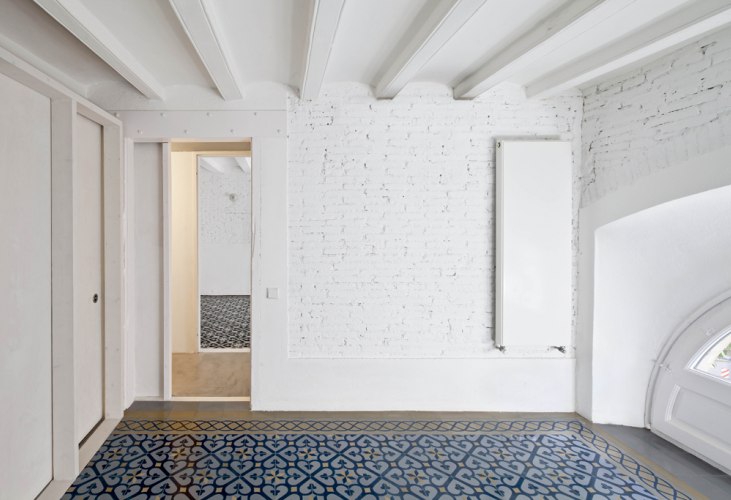 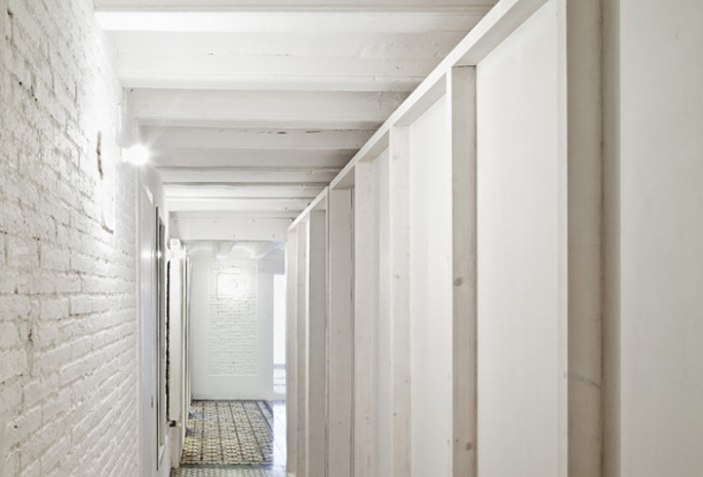 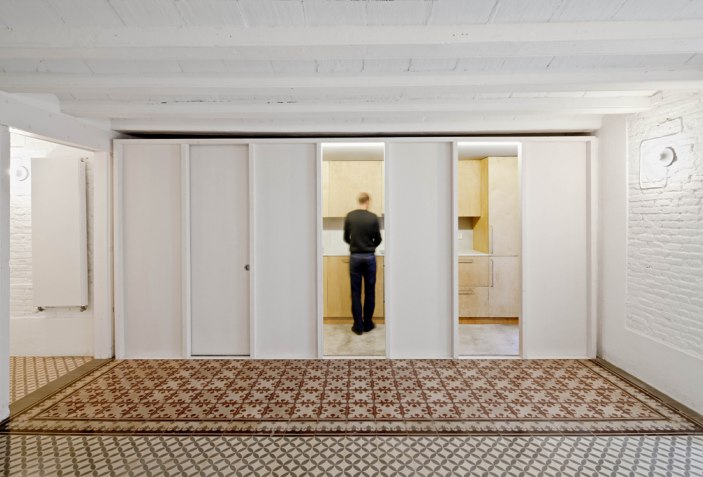 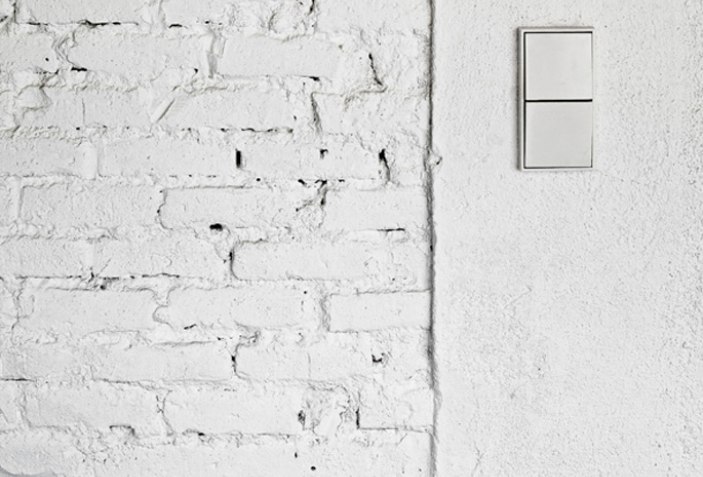 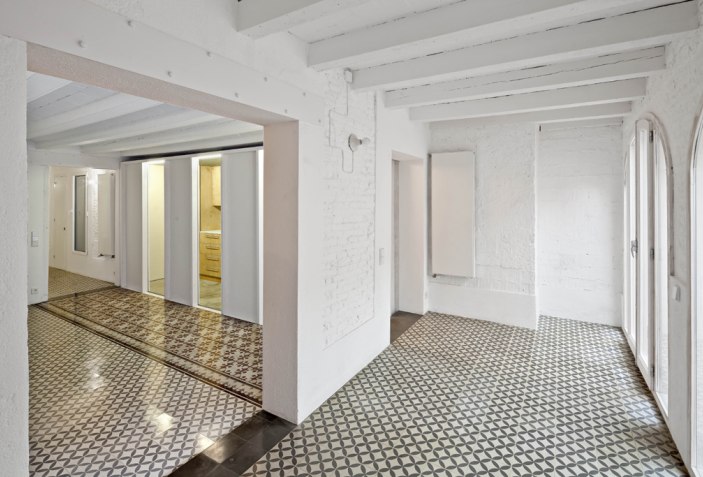 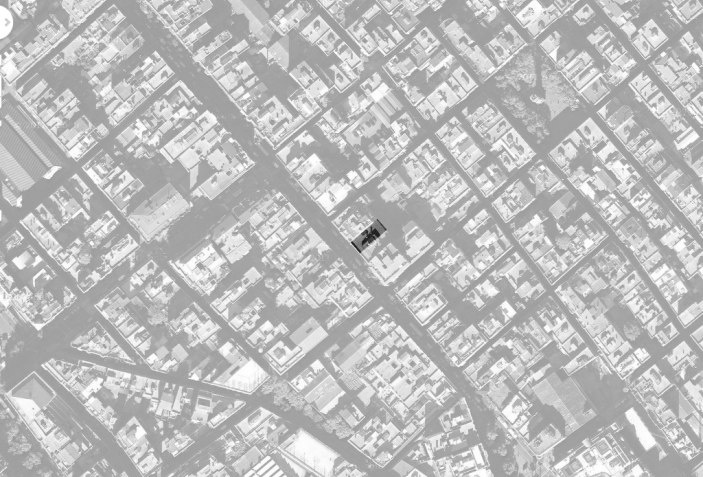 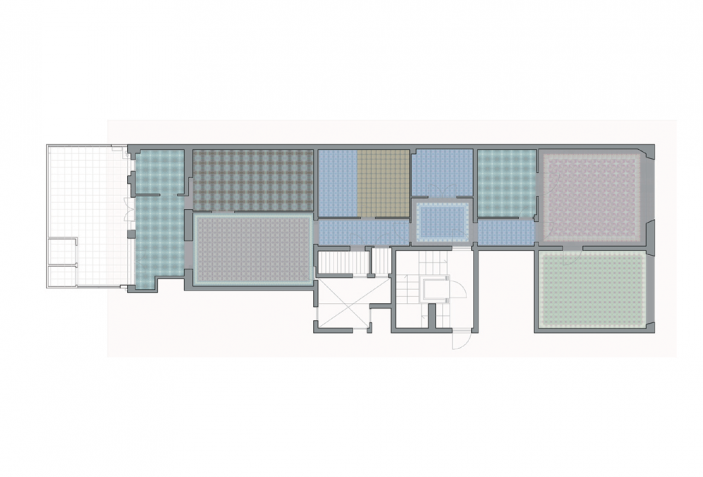 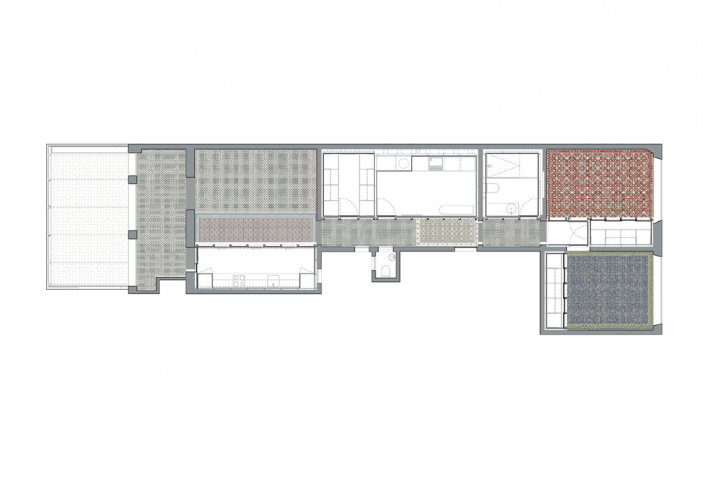 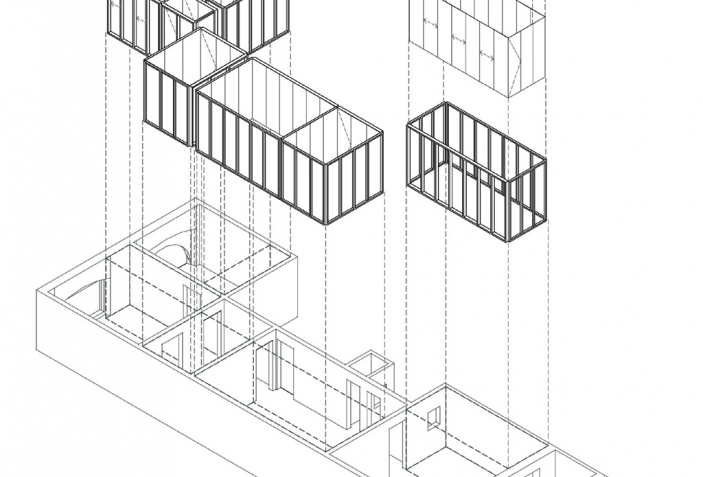 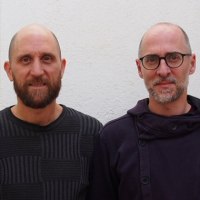 vora is an architecture studio in operation in Barcelona since 2000. It is headed by Pere Buil and Toni Riba, both graduates from ETSAB in 2000. They work in building and urban design, at different scales and typologies, with some forays into industrial design. They combine professional activity with teaching, curating, and cultural activities.

His approach to the design and construction process is based on the abstract and the material. They are interested in reduction and materiality in response to the challenges of architecture. Also because of the traces, traces, and absences as a remnant of memory and its impact on collective identities.

His work has received multiple awards, including the Frame 2020, Surface Design 2020, 2AA 2018, Archmarathon 2014, Ciutat de Barcelona 2013, AJAC 2012, Arquitectura + 2011, and Bonaplata 2007 awards, and has been a finalist or selected in several editions of the FAD, ENOR, Bigmat awards, Spanish Architecture Biennial (BEAU), European Landscape Biennial, Mies Van der Rohe and Arquia / Próxima Awards, among others. It was also exhibited at the Venice Biennale in the Catalan and Spanish pavilions in the 2014 and 2016 editions. In May 2018 they inaugurated their first monographic exhibition “Shared Identities” at the Kolektiv Gallery in Belgrade.

His works with the greatest recognition are: Vallirana 47 (comprehensive reform of a small residential building), the Can Rosés Temporary School, the Ramon y Mar Pavilion (a small domestic extension pavilion), the surroundings of the Born Market, the Juan apartment ( reform of a house) and the Can Ricart Sports Center in El Raval, all in Barcelona; the design of the Nantes chair, a Medical Clinic in Paüls, Rambla Sant Francesc in Vilafranca and the operations yard of the Bank of Spain in Madrid. 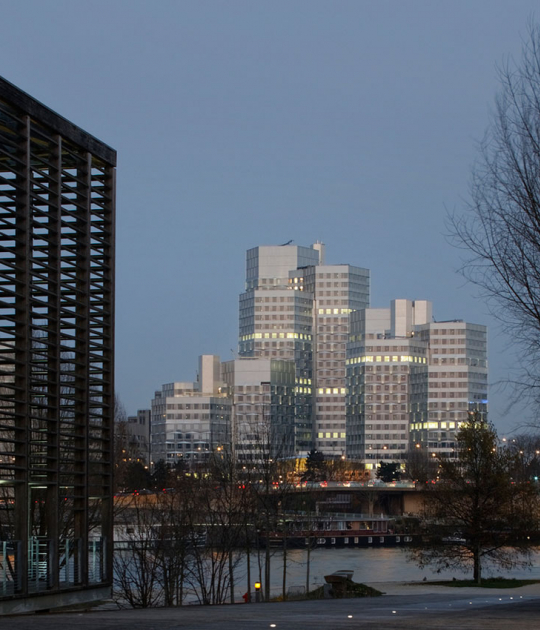 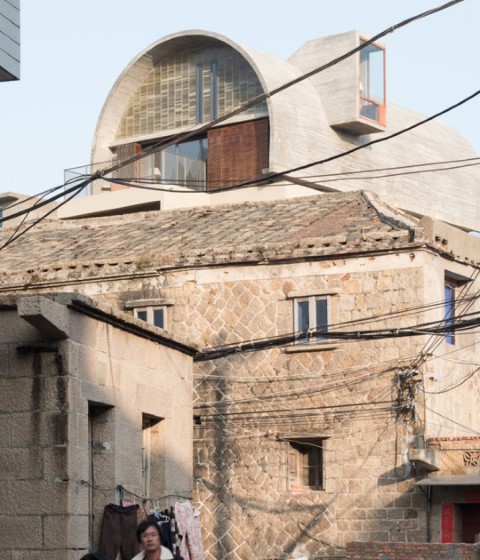 Cover on chaos. Renovation of the Captain's House by Vector Architects 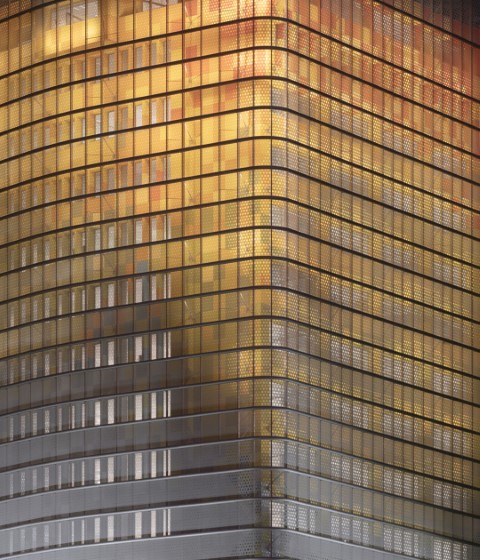 Dressing to seen. Renovation of Torre 30 by Ruíz Barbarín Arquitectos 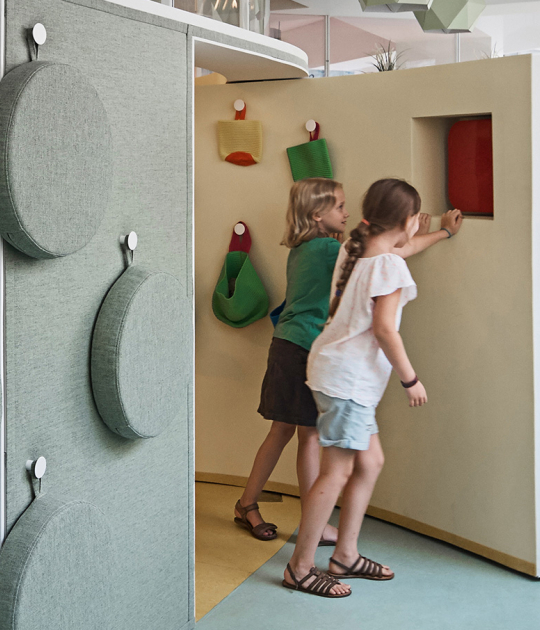